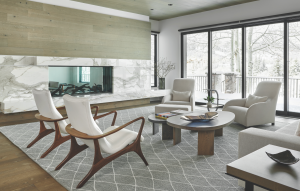 A two-sided fireplace was one of the items Mary Kay Bowden wanted in the family’s vacation home. With a marble plinth and surround, the fireplace divides living spaces on the home’s main floor. Vladimir Kagan chairs upholstered in white leather are opposite club chairs by B&B Italia. The sofa is from Holly Hunt and the rug is by Stark. | Photography by Dallas & Harris Photography

During the ski season of 2017-18, snow was scarce in Colorado. Brandt Bowden and his family, who visit Aspen from their home in Texas, grew frustrated and gave up trying to ski. Then Bowden, trapped indoors, started looking around and wondering how to make the house more livable for his wife, four children and frequent guests.

Originally owned by Bowden’s parents, the 42-year-old property is in Aspen’s desirable West End. Despite the great location, the four- bedroom, four-and-a-half bath residence on multiple levels and a steep site was in need of some love. 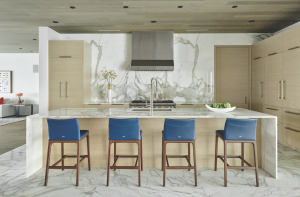 Cantoni bar stools offer a pop of color at the kitchen island. The floor is made of Calacatta Borghini marble slab off-cuts from one of the homeowners’ other projects. Marble also is used on the waterfall island and backsplash. The cabinetry is from Bourget Design & Millwork and handmade pulls are by Rocky Mountain Hardware. | Photography by Dallas & Harris Photography

“It had been renovated in 1995 before my parents bought it, but they didn’t change it that much,” Bowden says. His goal was to maximize the structure’s existing 5,200 square feet by removing walls, opening up the rooms and carving out space for a fifth bedroom and bath. Also important, he says, was “making it a modern house.” He and his wife Mary Kay follow contemporary Italian design and wanted to bring a simplified and sophisticated aesthetic to their mountain residence while also keeping it family-friendly. 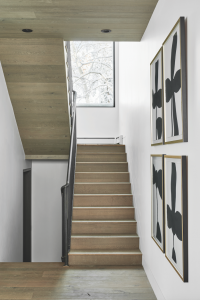 “We were trying to achieve a modern Italian look, but we still wanted it to feel warm, cozy, approachable, and kid-proof.”

Bowden, who with his brother and father develop multifamily housing across the country, used a computer program to sketch some ideas. He took his plans to Charles Cunniffe Architects in Aspen and began working with David Rosenfeld, senior project architect on the Bowden home. “The original layout of the house was disconnected and haphazard,” Rosenfeld says. “Additions had been made over time, and it was impractical. The master was on two levels, and there was a lot of wasted space.” 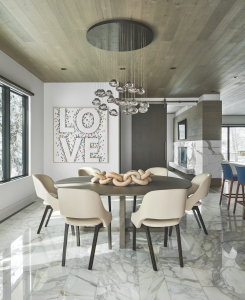 An Ochre chandelier is suspended above the Poliform dining table and Caste chairs upholstered in leather. The acrylic on canvas artwork was created by Mary Kay Bowden, who also did other art pieces for the renovation. | Photography by Dallas & Harris Photography

The building was stripped to its studs and the layout was opened to embrace its mountain vistas. “There was a major chimney right in front as you entered that was blocking views of Maroon Creek and Highlands [Ski Resort],” Cunniffe says. A new two-sided fireplace was designed and placed to divide the living space. “The fireplace is a really pretty feature of the house,” Brandt says. “It had been on a list of things my wife wanted in a house, and she and the kids love it.” 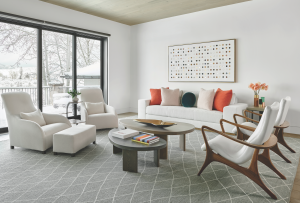 The modifications wouldn’t have been possible without structural changes. Digging below one of the home’s wings made it possible to add a guest suite that is big enough for Mary Kay’s twin sister, Kim, and her family of five when they visit.

“Brandt and Mary Kay are adept at knowing what they want and have very good taste in materials,” Cunniffe says. That knowledge included using stone left over from another construction project. The Bowdens had taken a trip to Italy to select marble for Brandt’s Houston office and had extra slabs of Calacatta Borghini marble, known for its pure white ground and striking gray veining. The off-cuts from the commercial project were used in pieces of varying widths and lengths in the Aspen home’s kitchen. 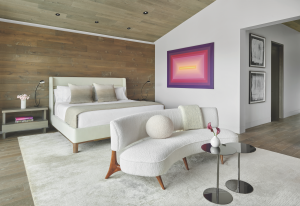 Artist Sarah C. Ferguson of Austin, Texas, did the colorful acrylic on canvas painting in the bedroom. The Dmitriy & Co bed is flanked by side tables made by Skylar Morgan in Atlanta. A sitting area features a Vladimir Kagan sofa. | Photography by Dallas & Harris Photography

Additional Borghini marble covers the walls and floors of the primary bathroom, one of Brandt’s favorite rooms in the house. “We took what was an overdone main bath and closet and turned it into–dare I say it?–a sexy bath that’s super functional and has great design layered into it,” he says.

To soften white walls and modern furnishings, wood surfaces throughout the home play an important role. Textured French oak from Exquisite Surfaces Manoir Collection is used on floors and ceilings. 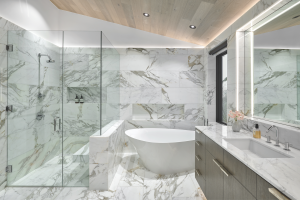 On a trip to Italy, the Bowdens selected Borghini marble for use on the floors, ceiling, shower and countertop in the bathroom. Linear lighting adds to the room’s modern appeal. | Photography by Dallas & Harris Photography

While the Italian sofas and chairs in the home look pristine, the furnishings were chosen with practicality in mind, says Mary Kay, who enlisted the help of interior designer Meredith McBrearty of Atlanta. “We were trying to achieve a modern Italian look, but we still wanted it to feel warm, cozy, approachable and kidproof,” she says, noting her children are now between the ages of 5 and 12. “We used a lot of leathers and Perennials fabrics that make clean-ups easy. I didn’t want to stress every time there was a spill.”