Bloom Denver elevates the holiday window into an artful contemplation 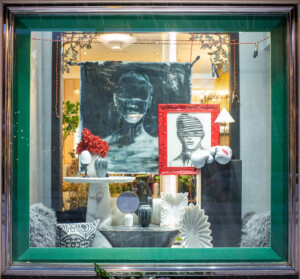 Spend ten seconds in the Cherry Creek North boutique and flower shop BLOOM Denver, and you will immediately understand that store owner Anuschka Pashel’s imagination is bursting with color, adventure, joy and mad creativity. So it makes sense then that the store’s many (five in all) display windows are eyes into the soul of its owner. Each one is an art installation and a joint effort between Pashel, her BLOOM team and local creatives who are coached, cheered and sometimes pushed (she is no wilting flower) by Pashel. 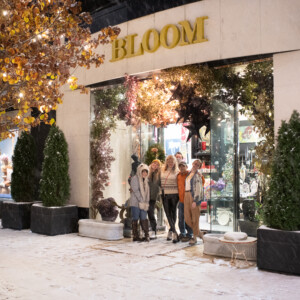 This year’s holiday windows are an abundant case in point. “The idea came to me this summer when we were visiting the Picasso chapel of the castle of Vallauris in the South of France,” she says, while characteristically pulling up show-and-tell photos of the space on her iPhone. (Pashel takes pictures of EVERYTHING for joy and future reference). The image shows an arched space with large murals on both sides. In the middle is a painting of the human race, showing figures in every variation of skin color standing together and holding a dove. 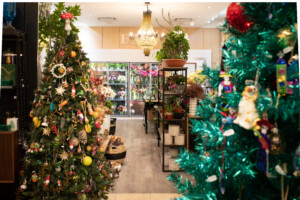 Leave it to Pashel to turn the “naughty or nice” holiday treacle into War and Peace. Or, in this specific vision, store windows that are a contemplation of good and evil. To this end, she even flew in Lioba Amann, an artist friend of her mother, from Saarlouis, Germany, for a week of painting. That’s right, Pashel and Amann spend five solid 7 am to 7 pm days in Pashel’s basement sketching and painting artwork for the store’s holiday windows.

Pashel also called upon local artists and friends Annie DeCamp, Michael Dowling and Madeleine O’Connell to take on the theme. Each artist was given their own window, and their works were then accessorized by BLOOM store designer Daniel Gieseking and floral designer Marat Federov. 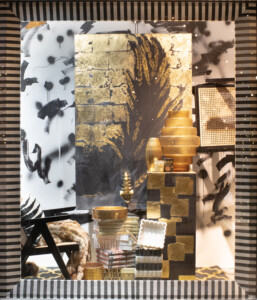 The result is a glorious mix of art, commerce and narrative—a visual feast that includes fallen angels, satyrs, Venus, boxing gloves, bejeweled heads, Kalishnokov rifles, the Hindu goddess Durga. a Pandora’s box and plenty of gold. “Yin and Yang, love and hate, peace and war,” it’s all there,” says Pashel, “and hopefully, beauty comes out of the darkness.” 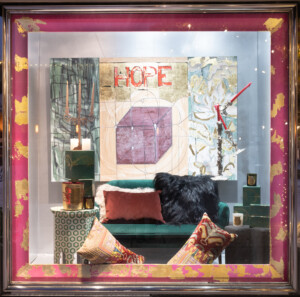 Holiday shoppers who make their way to BLOOM would do well to spend some time walking the perimeter and taking in the windows. The final one, just around the corner of Second and Steele Street, is a collaboration between Pashel and Amann that ends with a message of “HOPE.” And in case the symbolism of the Lotus flower is unknown to a visitor, Pashel is happy to share: “From the murky mud of life grows the purely beautiful lotus flower, trusting in its own unfolding.”