Many of us dream of slipping on a pair of well-worn boots and ambling through the tall grass, of relaxing with good friends and neighbors in a close-knit community, or of finding a modern retreat in the heart of a historic city.

These three developments are throwbacks to life in the Old West, to pastures and porches and bustling promenades—reminders that life’s greatest luxuries often are the simplest.

Many of us dream of slipping on a pair of well-worn boots and ambling through the tall grass, of relaxing with good friends and neighbors in a close-knit community, or of finding a modern retreat in the heart of a historic city.

These three developments are throwbacks to life in the Old West, to pastures and porches and bustling promenades—reminders that life’s greatest luxuries often are the simplest.

Indian Peaks South, Lafayette
“We’re trying to create a sense of place in this community that has historic roots,” says Caroline Hoyt, co-founder and vice president of design at Louisville-based developer McStain Neighborhoods, who worked with Boulder-based Oz Architecture to come up with a set of design guidelines based on a study of Colorado’s history—and indigenous architecture—around the turn of the twentieth century. That’s why Indian Peaks South doesn’t look like it could belong in California or Connecticut. “It’s kind of like a historic village that’s retrofitted.”

As in early Western towns, the home sites of Indian Peaks South are oriented around a long central park. A network of alleys keeps garages and driveways tucked away from the street, Hoyt says, allowing the street to become “a place where people walk and you can have porches, to create a sense of community.”

The charming 307-unit development offers a range of single-family homes, townhomes and duplexes, with single-family homes starting in the upper $300,000s. Model homes replicate the graceful stick-framed houses commonly found in Colorado towns more than a century ago, with pitched roofs, board-on-board siding and sandstone—but, of course, they also offer all of the modern amenities and luxuries of today’s home. 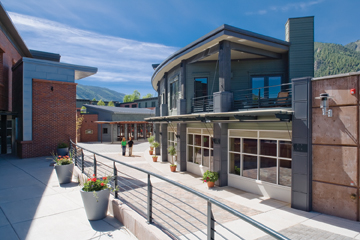 Obermeyer Place, Aspen
Located on a reclaimed rail yard in downtown Aspen, Obermeyer Place is modern and new—completed just last year—and yet it’s not out of place in the 1880s mining town. The 230,000-square-foot mixed-use development, which comprises five separate buildings with 44 residences (units are offered from $4 to $7 million) and 38,000 square feet of commercial space, is woven into the town’s architectural fabric.

The buildings’ red brick-and-sandstone facades and flat roofs echo Aspen’s stately historic structures. And their scale mirrors the size of the city’s traditional lots. “A place needs to be authentic; it needs to be real. It has to belong to the place and the patterns of the place,” says John Cottle, principal of Cottle Carr Yaw Architects Ltd. in Basalt.

Cottle and his team took into account not only the land’s heritage, but also its future when designing this development. The red brick of Obermeyer Place is accented by newer, grittier elements including exposed steel, projecting balconies and expansive bay windows, which help propel the design forward and make the historically rooted community relevant to both time and place. After all, Cottle says, “If it’s not forward-looking, it’s embalmed.”

Indian Shadow, Hesperus
Residents can stake their claims on the Old West ideal of wide open spaces at Indian Shadow, a shared ranch development just 12 miles west of Durango. This is luxury in its purest form.

The private mountain enclave comprises 49 home sites—averaging five or six acres each and going for over $1 million—on nearly 1,800 acres, leaving more than 90 percent of the land undeveloped. “The idea for Indian Shadow is to keep it in pretty much its natural form,” says Russ Smith, co-owner and broker with Prudential Triple S Realty in Durango. “I see this as a big legacy project. This will be a place for the family to gather.” A place for children, parents and grandparents to fish, hike, ride horses and make memories.

Outdoor amenities abound. A private trail system winds throughout the scenic ranch, and more than a mile of the La Plata River runs through the property. Tucked next to the river is a communal fire pit encircled by welcoming Adirondack chairs. “They’re for star-gazing and for conversation; that’s our kind of entertainment,” Smith says.

Phase One of the development is 85-percent complete, with roads, utilities and infrastructure in place. Indian Shadow’s properties should be on the market later this year, Smith says, so there’s ample opportunity for you to invest in your own piece of ranchers’ heaven. “You’re going to wear your boots and jeans at this place,” Smith says. “It’s a simpler time and a simpler lifestyle.”

This article appears in the August 2009 issue of Colorado Homes and Lifestyles.
Categories: Entertaining, Exteriors, Stylemakers