Before she began designing homes for celebrities like Jessica Alba and Kristen Bell, Kari Whitman was just a kid growing up among Boulder’s distinctive combination of righteous cyclists, collegiate verve, natural splendor and Suburu-driving hippies. “It was a really cool place to grow up,” says Whitman, principal of Beverly Hills-based Kari Whitman Interiors. “I have a profound love for Boulder.”

Whitman spent years away from her beloved hometown—pursuing modeling and acting jobs in Los Angeles that gave way to a design career when Eagles drummer Don Henley got a look at her house and hired her to design his own home. But Whitman couldn’t resist the draw of Boulder, and in September 2012 she bought a vintage cottage two doors down from her childhood home.

The architecture, the front porch and the abundant space won her heart, she says. The rest she transformed from a beige-and-boring home into a glamorous, modern retreat. “When you walk up to the house, you expect the inside to be cute and rustic,” she says. “And it’s a surprise when you walk through the door. I like dichotomy. I don’t like anything that’s expected—not in design, not anywhere else in my life.” 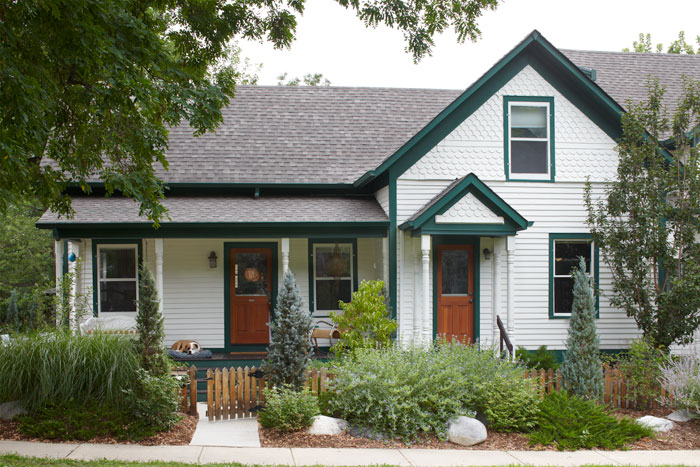 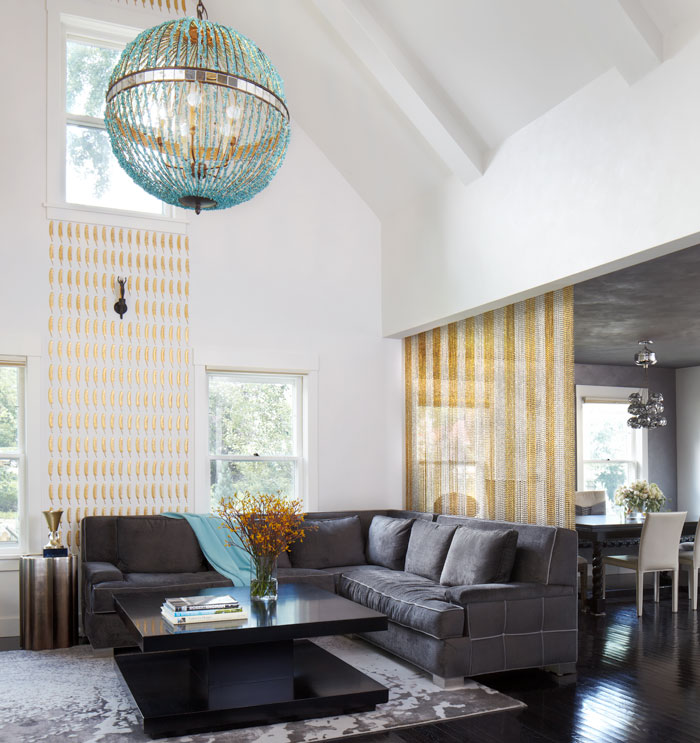 What does Kari Whitman love best about her living room? The brass feathers that she purchased from Etsy and arranged in a dramatic display up the wall. “They’re the cheapest thing in the room,” she laughs. “There’s a lesson there.”  Whitman had the lush sofa custom-made in Los Angeles and paired it with a black, angular coffee table from Caracole and a side table from Arteriors. The curtain “wall” of ball chain separating the living and dining spaces sparkles in brass and stainless-steel stripes. A turquoise chandelier from Currey & Company adds a glam jolt of color. 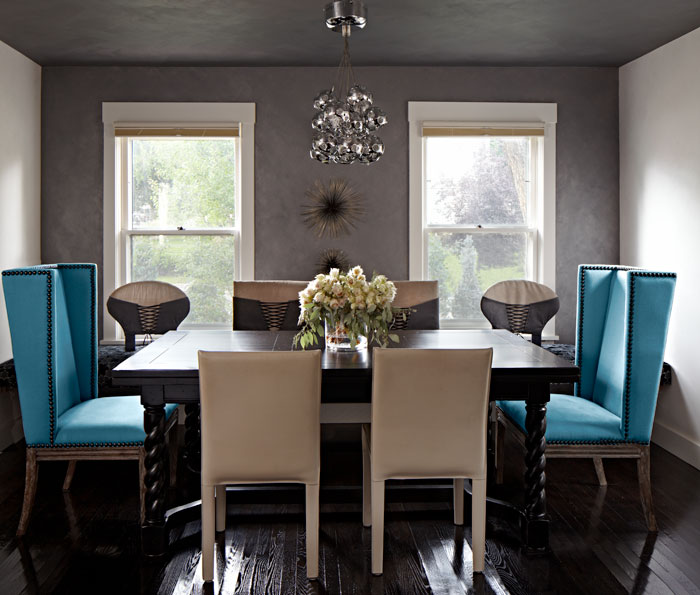 “To recycle is to reuse,” says Whitman. True to her word, she picked up this dining table from Clutter Consignment in Boulder and had the host chairs covered in turquoise pleather she had left over from a client’s project. She found the beige chairs at The Amazing Garage Sale in Boulder; the light fixture came from a vintage shop in Dallas. Whitman commissioned a craftsman to create the bench with the corset-wrapped chair backs. The metallic silver plaster on the wall and ceiling is from Firenze. 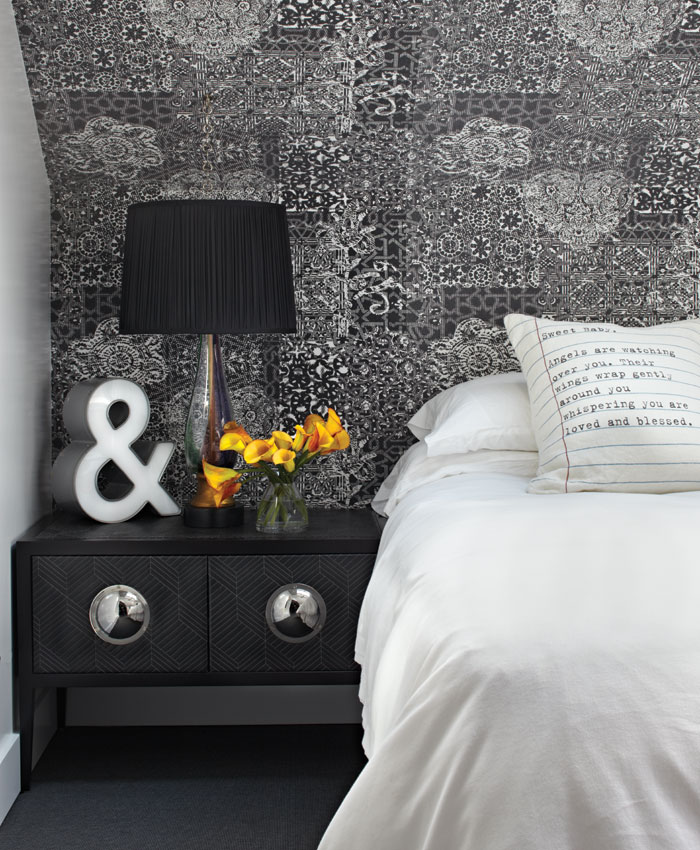 “I just wanted my room to be sexy but comfortable,” Whitman says. To that end, she covered the walls in romantic wallpaper and added skylights to let in Colorado’s incomparable sunshine. Whitman designed the side tables—“inspired by Pucci”—and found the lamp at Material Environments in L.A. The ampersand is from The Amazing Garage Sale in Boulder, and white bedding is “always the right choice,” Whitman says. 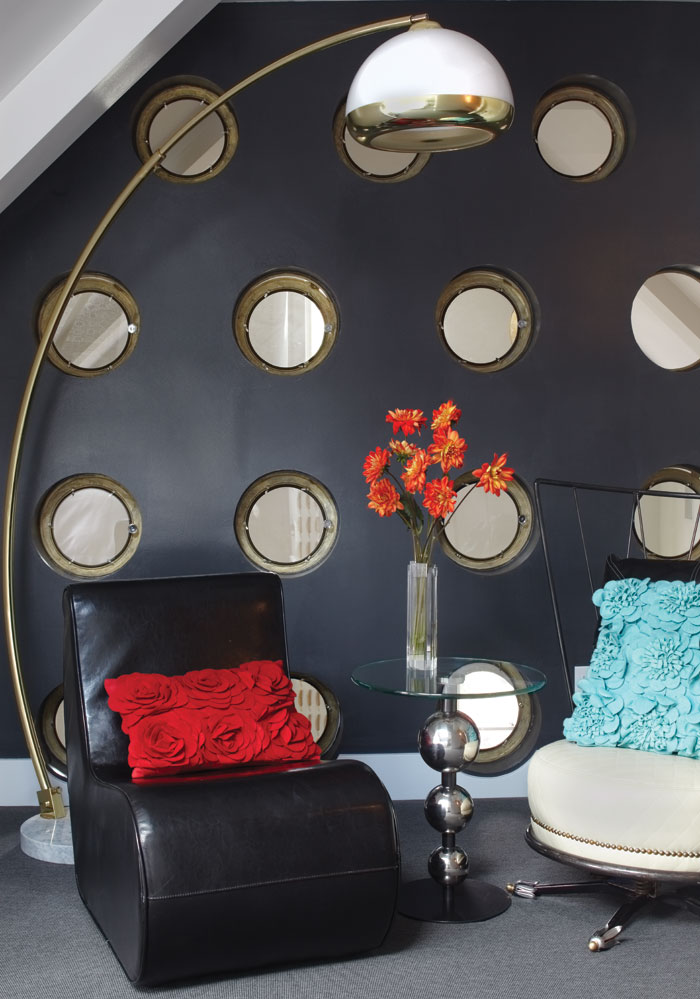 In the second-floor sitting area, Whitman installed 20 porthole windows, reclaimed from old ships and discovered at Seaside Treasures in Clearwater, Florida. “People thought I was crazy,” she says, “but that’s never stopped me before.” Whitman found the white chair at Luna Antiques in Miami, and the black chair, originally from Design Within Reach, at The Amazing Garage Sale.

This article appears in the January-February 2014 issue of Colorado Homes and Lifestyles.
Categories: Interiors