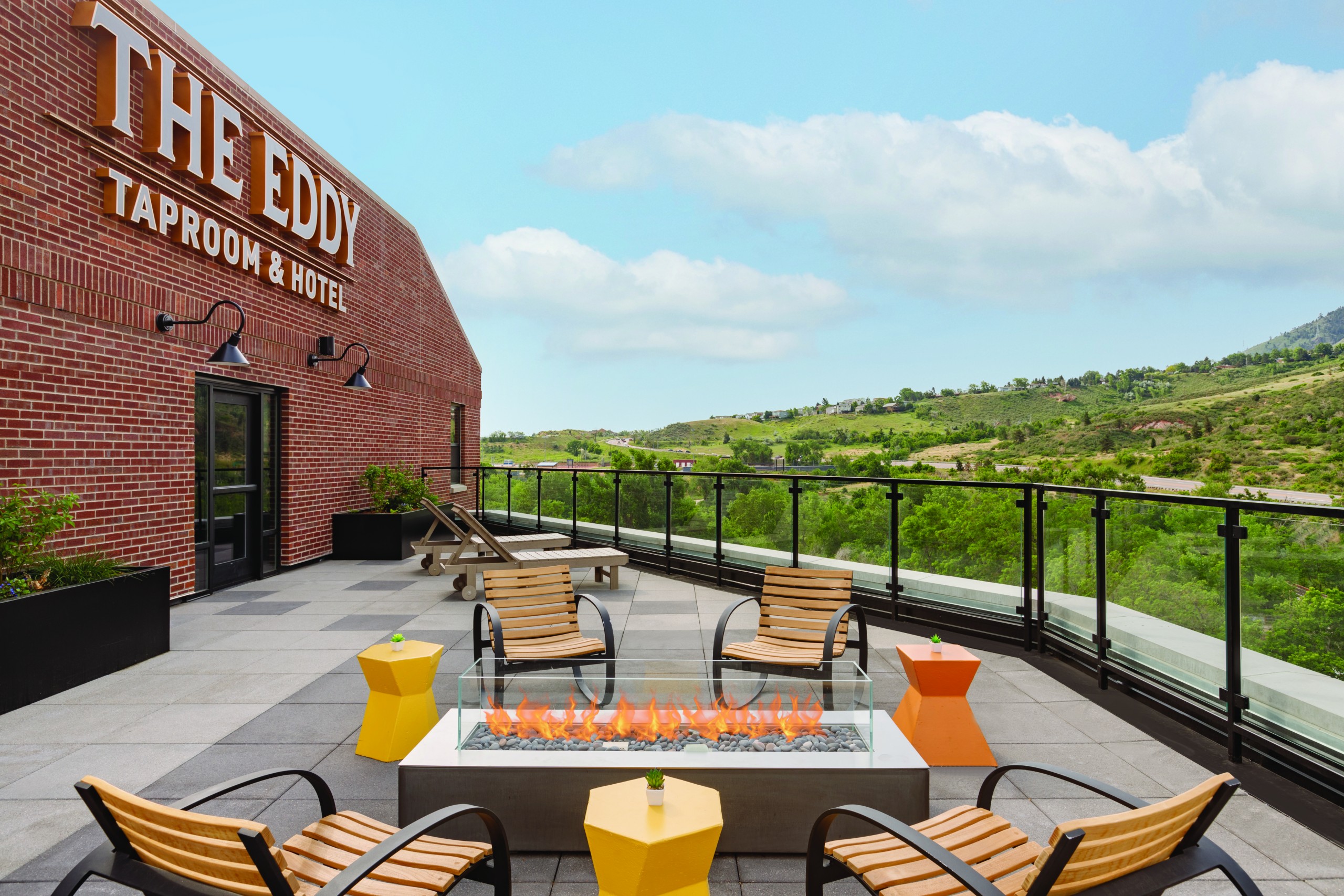 Golden, Colorado inspired the design and architecture of The Eddy Taproom & Hotel.

Colorado’s industrial roots, mining history and outdoor spirit is captured in the 49-room boutique hotel along the banks of Clear Creek. 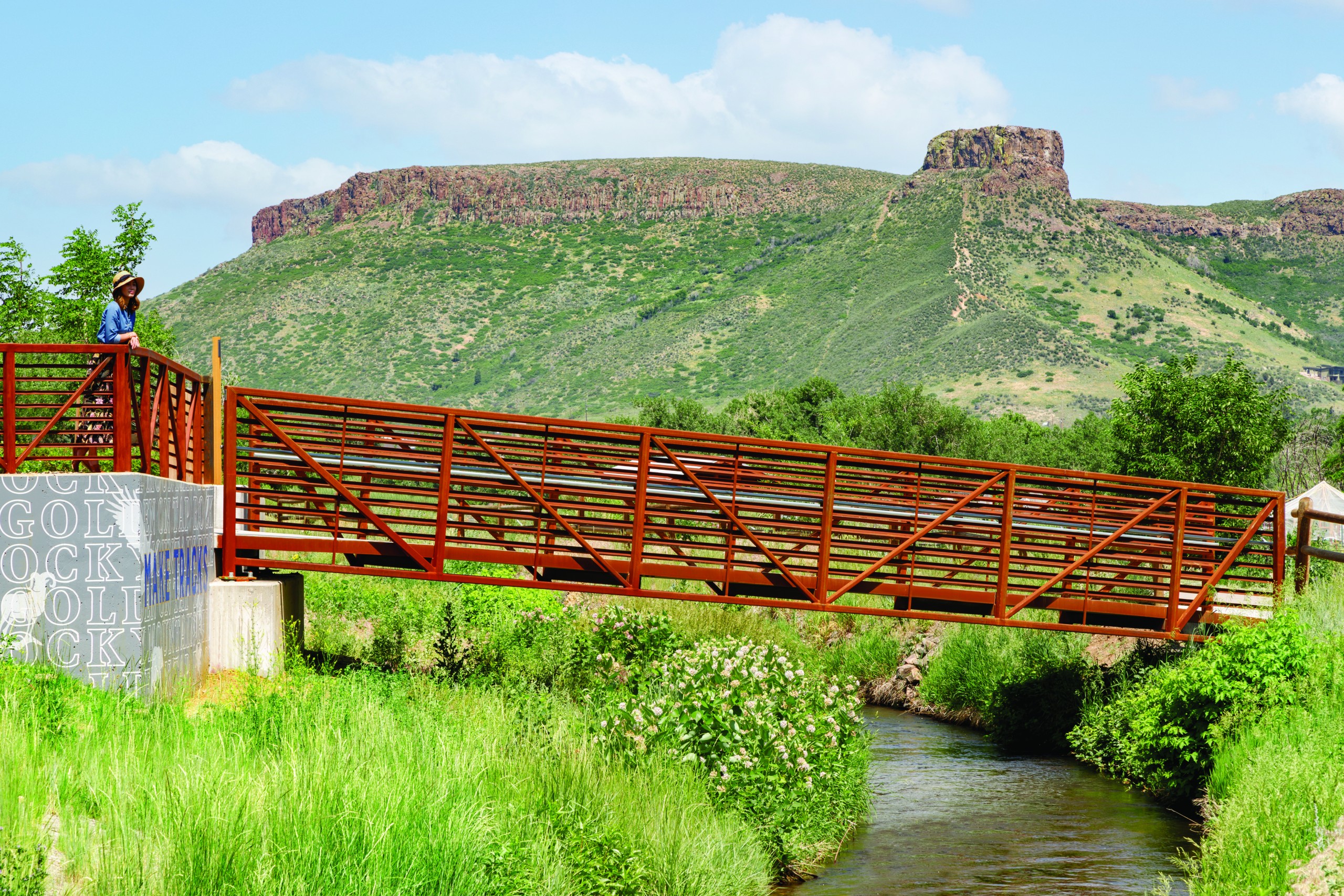 Founded in 1859, Golden was the territorial capitol of Colorado from 1862 until 1867. The town was originally called “Golden City” because it was a supply center for miners of the region during the Pikes Peak Gold Rush. From the region’s industrial roots to its mining history and the adventures found in the surrounding Rocky Mountains, the design and architecture of the new hotel captures all that is Golden. 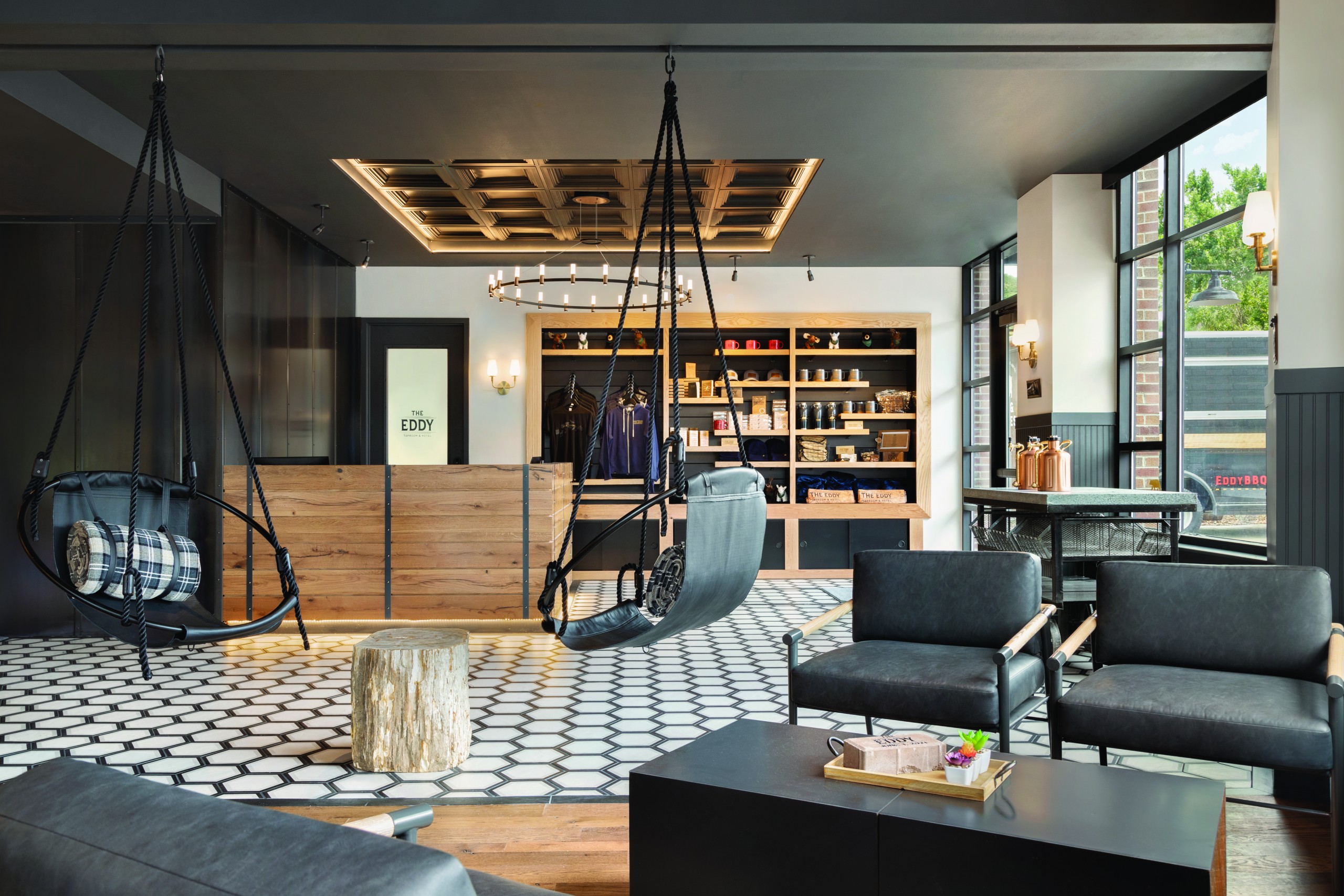 “The hotel is a mix of contemporary and vintage inside with an industrial skin that references the past,” said General Manager John Drugan. “As you explore the hotel, it’s evident that every element was selected with an intent to pay homage to Golden, its history and the western, outdoor lifestyle the town is known for. The historical and contemporary spirit of adventure and exploration really comes alive in the property’s whimsical and distinctive details.” 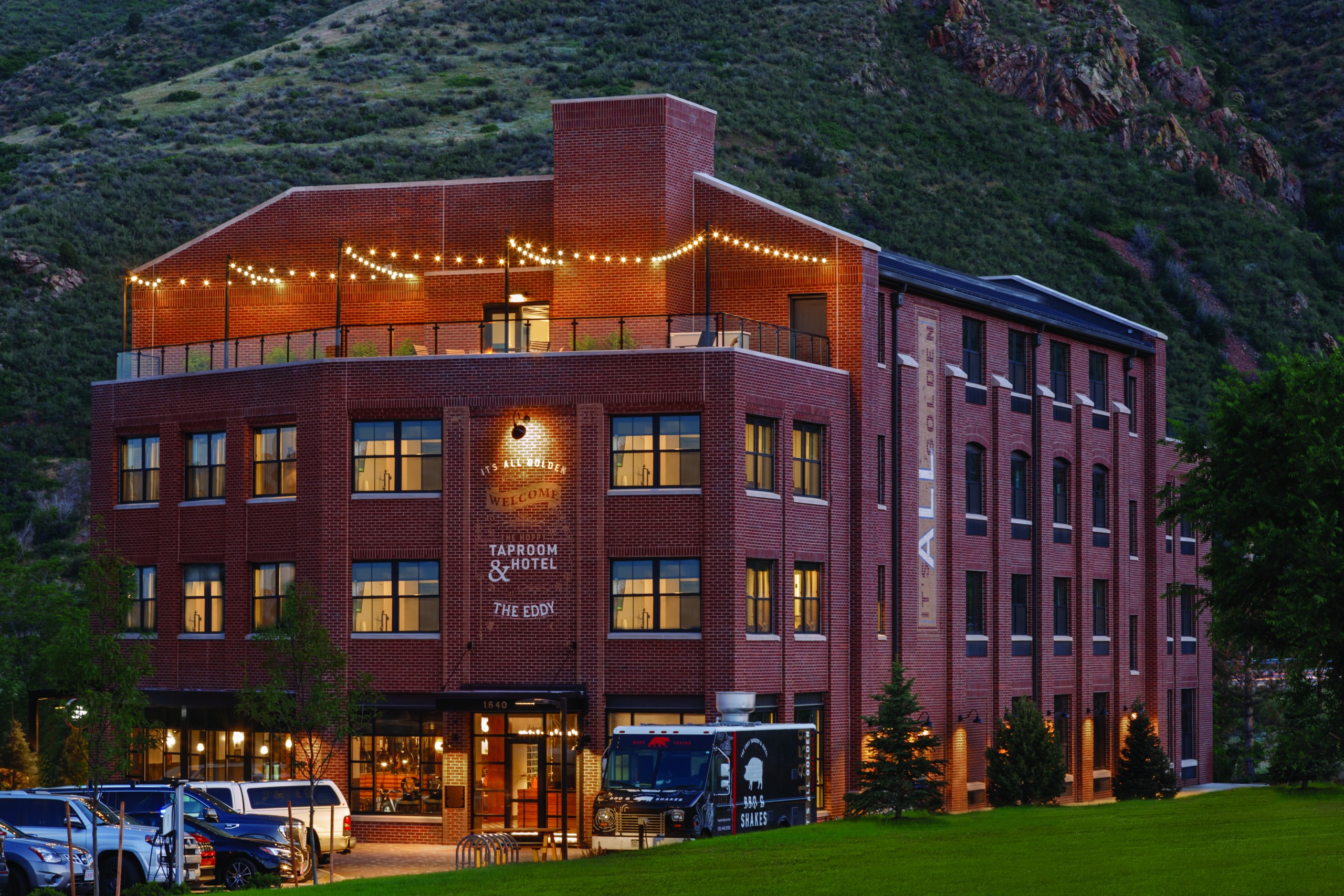 The 49-room boutique hotel is situated along the banks of Clear Creek on the site of the old Golden Fire Brick Company, which inspired the architecture of the property. The team from Craine Architecture in Denver explored the design elements of 19th century American industrial factories to envision The Eddy. The brick exterior is a nod to these factories of yesterday and the entrance to the hotel even integrates some of the original bricks from the old brickyard. Steel riveted panels bring the industrial feel indoors and the roughhewn wood floor is reminiscent of old factory flooring. Turn of the century light fixtures and the tin ceiling capture the essence of yesteryear. 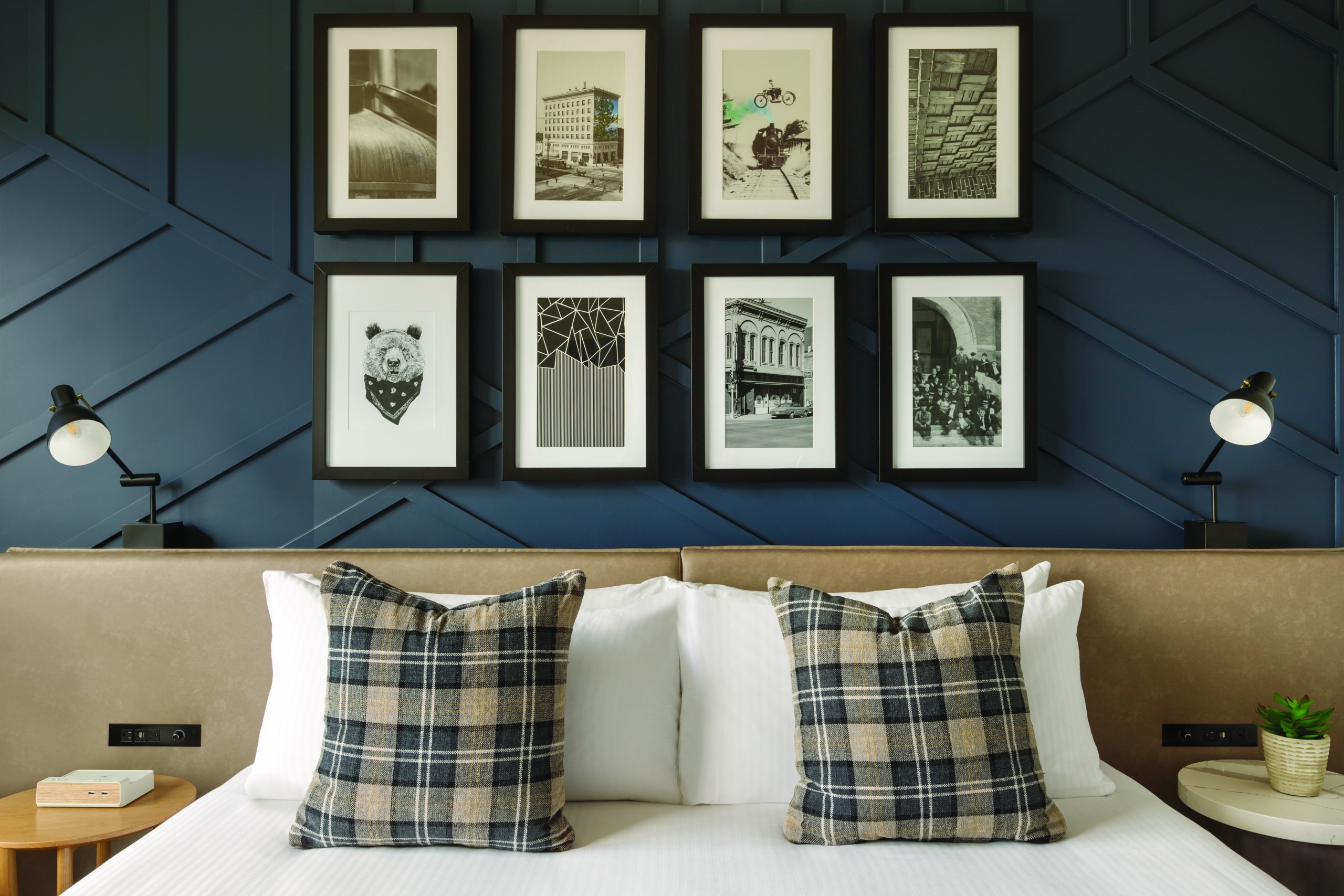 Golden and its mining history are evident throughout design details, which were created by Studio R in Denver. Door numbers for each guest room were modeled after historical miner tags. Used to indicate the location of each worker, miners would take a tag off of a master board as they entered the mine and replace after a day’s work to indicate they had cleared the site. 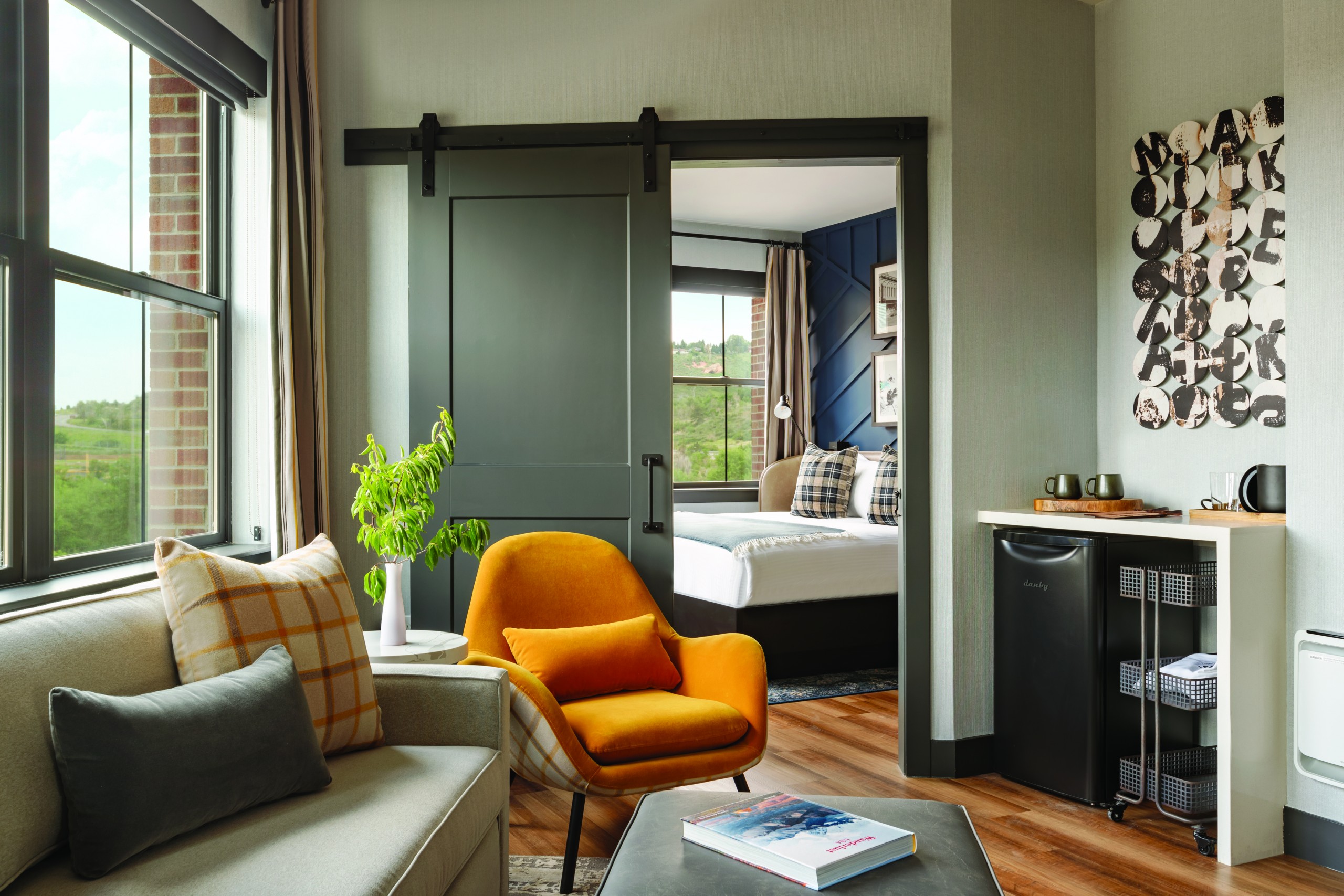 Inside the guest rooms, the desks are reminiscent of old mining carts with an aged painted metal base and The Eddy mark stamped into a salvaged lumber desktop. The custom-designed headboard wall is inspired by classic board and batten but done and finished in a striking modern blue twist. A custom chair with mid-century lines and a mustard ochre hue adds a pop of color and residential feel to each room with plaid accents that bring a touch of the mountain west to the contemporary furniture. The unique open closet provides a modern twist on the industrial mix of steel and wood. The art in the guest rooms also captures the history of the area with vintage Golden pennants on the wall, and black and white photos telling the story of the area. 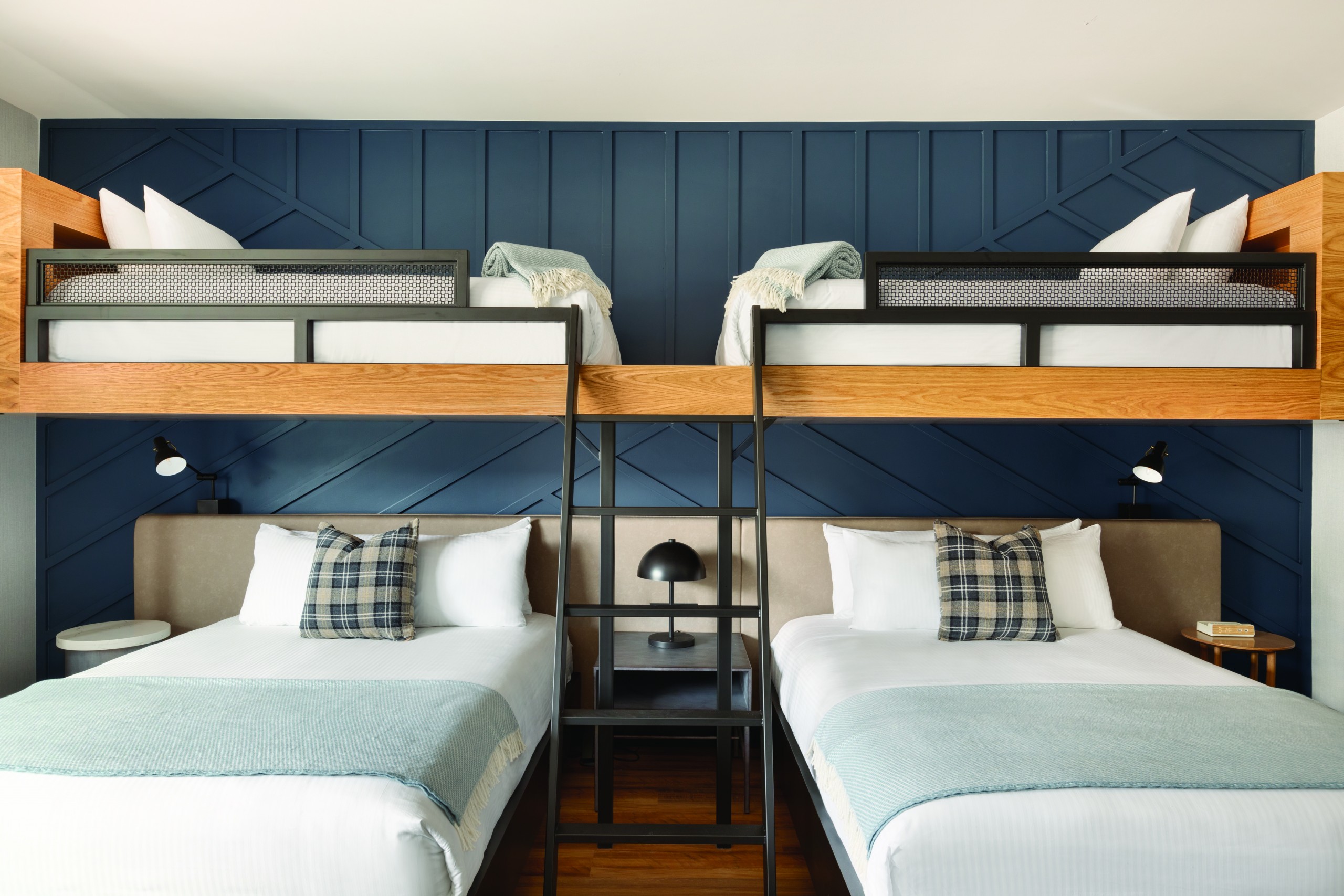 Scenes of Golden’s past are found throughout the guest room corridors with black and white photos capturing the mining and beer manufacturing history. There even is a photo of some of the original faculty from the nearby Colorado School of Mines. Floors two through four offer refreshment stations in each corridor with an espresso machine and filtered water. If guests opt to take the stairs between floors, they also will notice the elevation of each floor noted starting at 5,675 feet – Golden’s elevation. 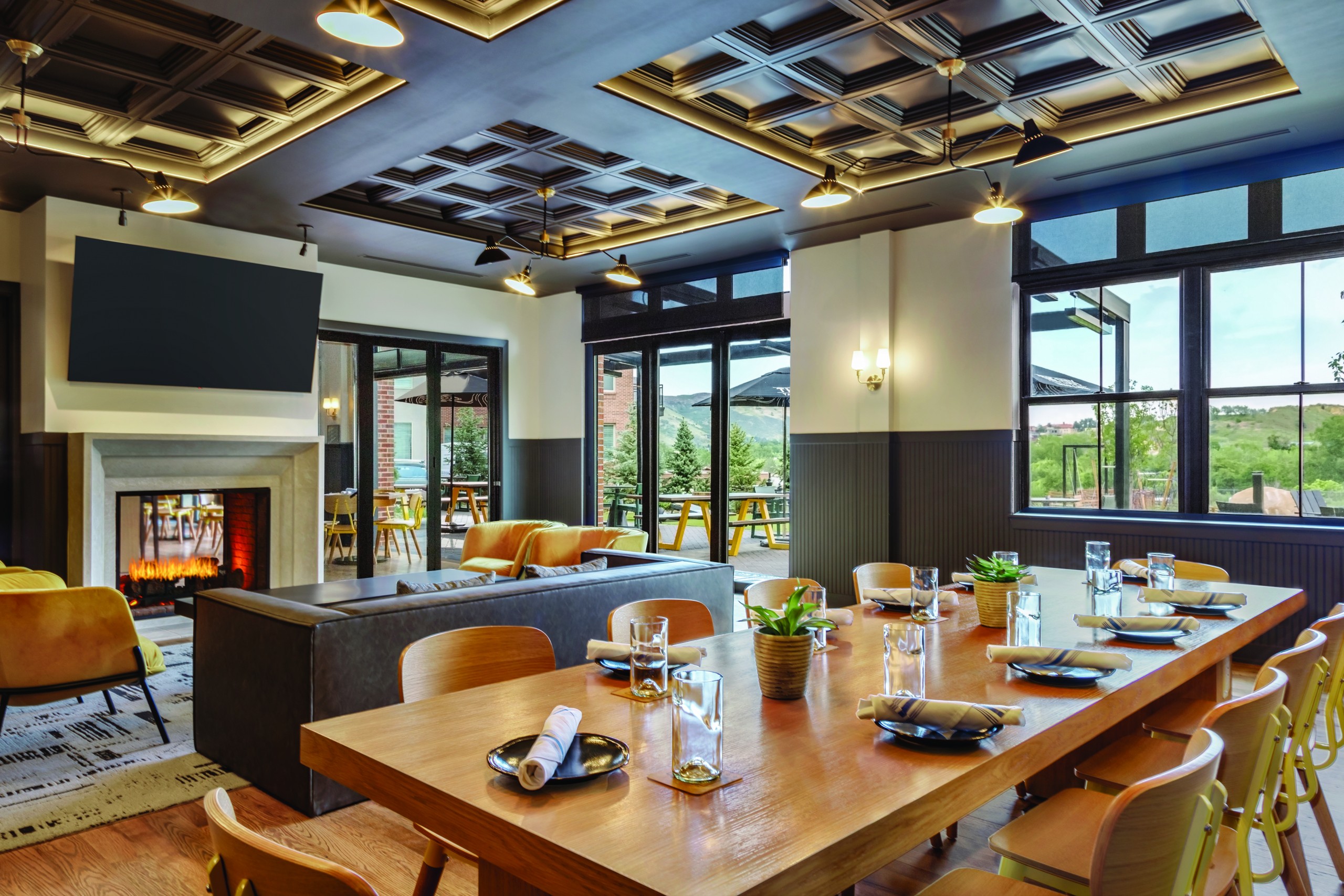 On the main lobby level, there are unique touches from the entrance of the hotel to The Taproom. Upon arrival, guests can relax in two black leather swing chairs with a cushion on the back that looks like a miner’s rolled quilt with a leather strap holding it in place. A large custom chalkboard displays activities available at the hotel throughout the week, staff picks for favorite hiking and mountain biking trails as well as things to do in Golden.\ 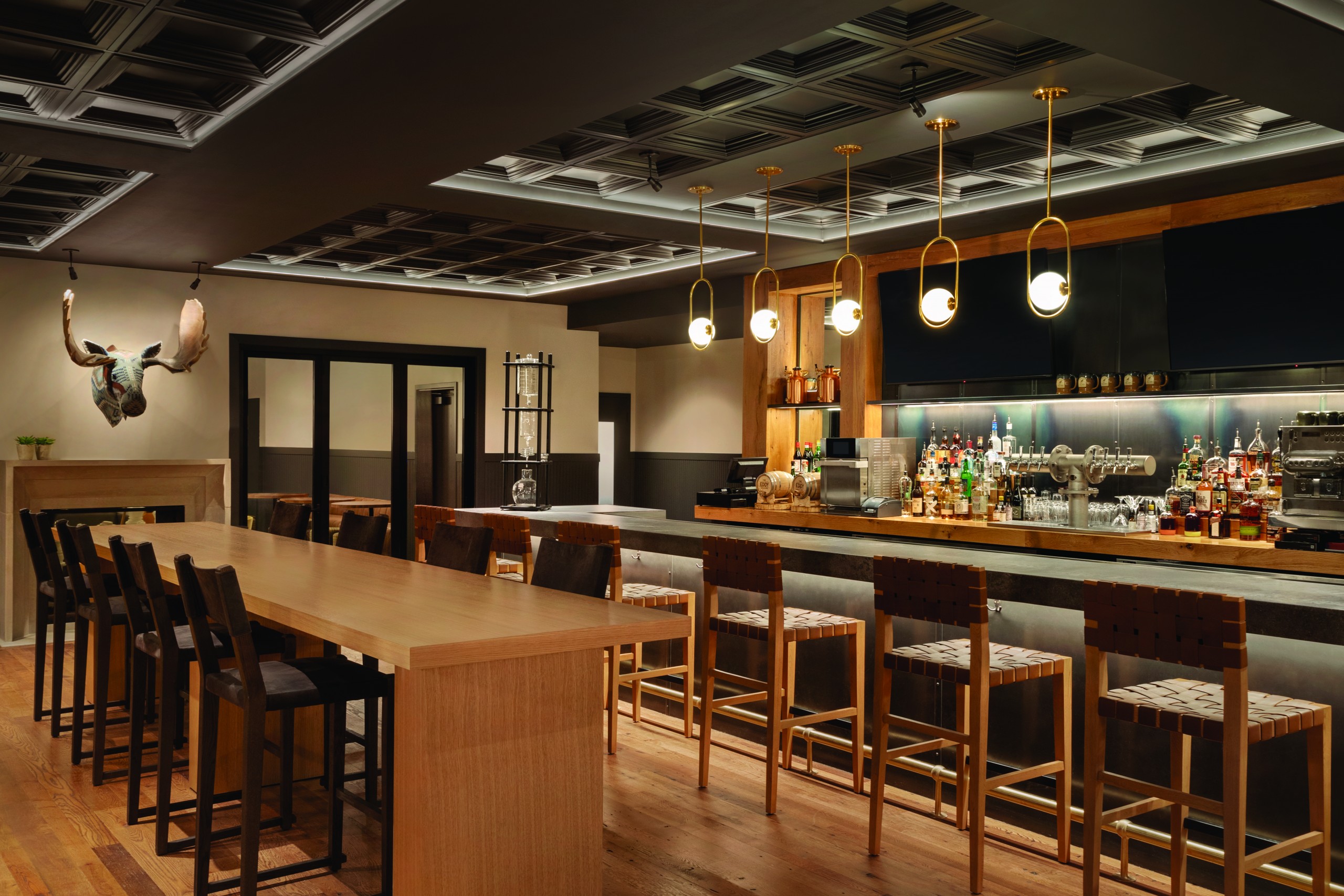 The Taproom exudes the feeling of an old pub with modern accents. Back-to-back banquettes include a unique leather bolster inspired by old town cars with brass accents. The artwork is the star in The Taproom with a large moose head, reinterpreted in southwestern blankets, overlooking the bar from its vantage point over the fireplace. 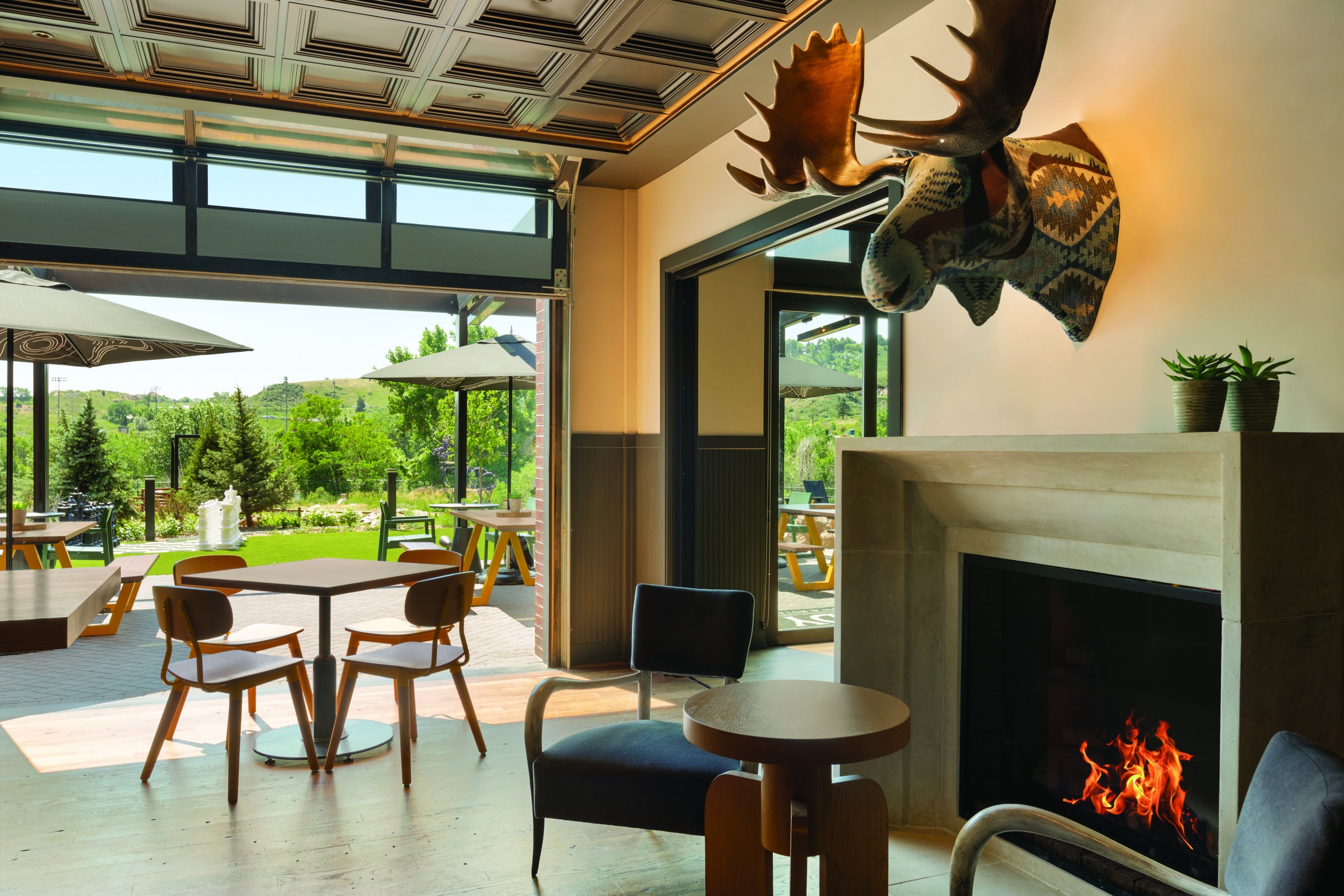 The sculpture by Colorado-born artist Andrea Lee Nelson is called “Old Cannonball” after the original name of the adjacent Clear Creek, which was known as Cannonball Creek. Three eclectic pieces by Colorado artist Andi Burnam bring a bright pop of color to the space with whimsical scenes of bison, porcupine and a big horn sheep lounging on an old Victorian sofa. 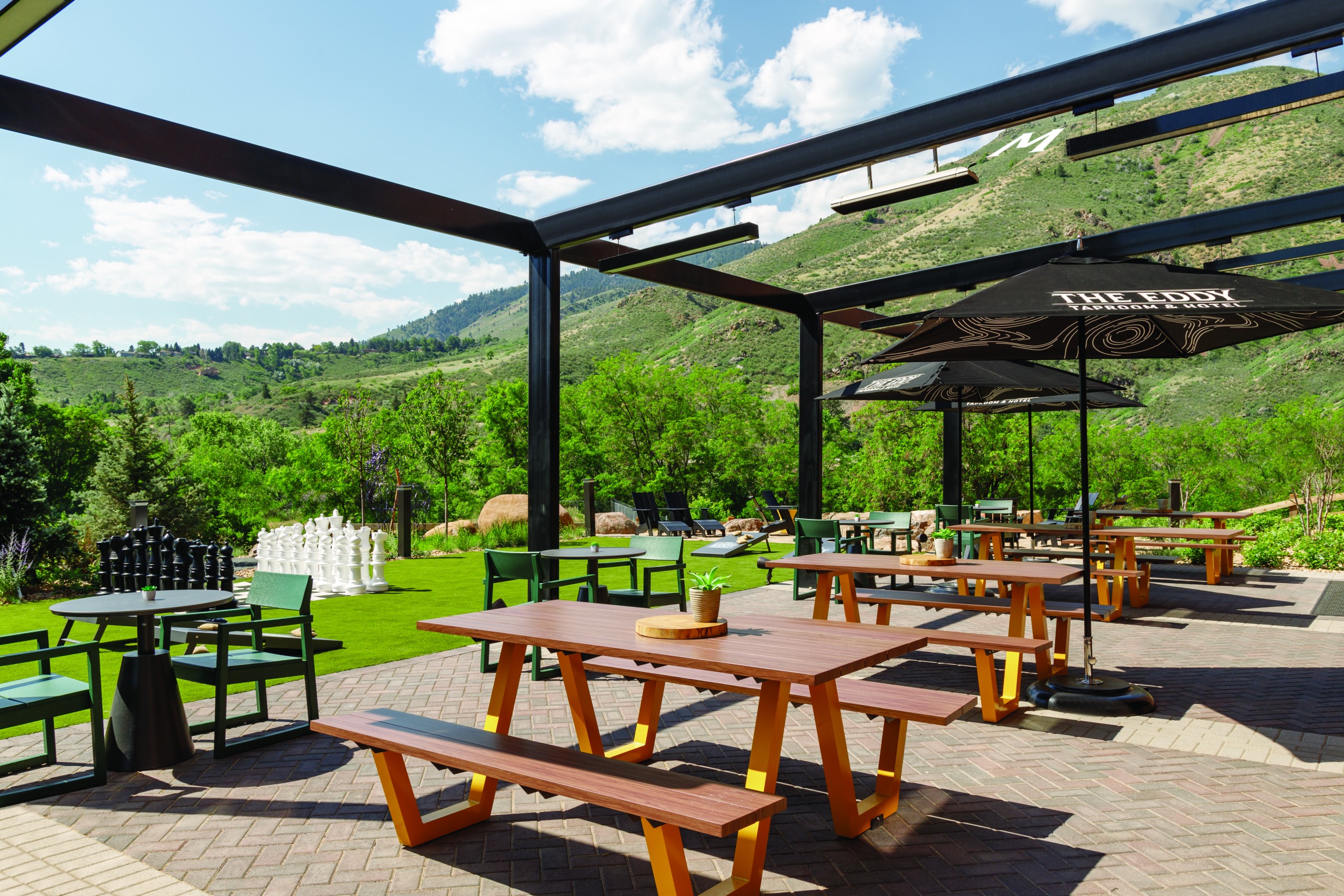 Large garage doors open The Taproom to the outdoor lawn. The Eddy’s outdoor experience is as unique as the indoor scene and its connections to Golden’s adventure lifestyle. Art House Graphics designed custom bike racks with a funky nod to miner’s tools. They also created the outdoor murals and signage which harken back to turn of the century factories like this site’s Golden Fire Brick Company. 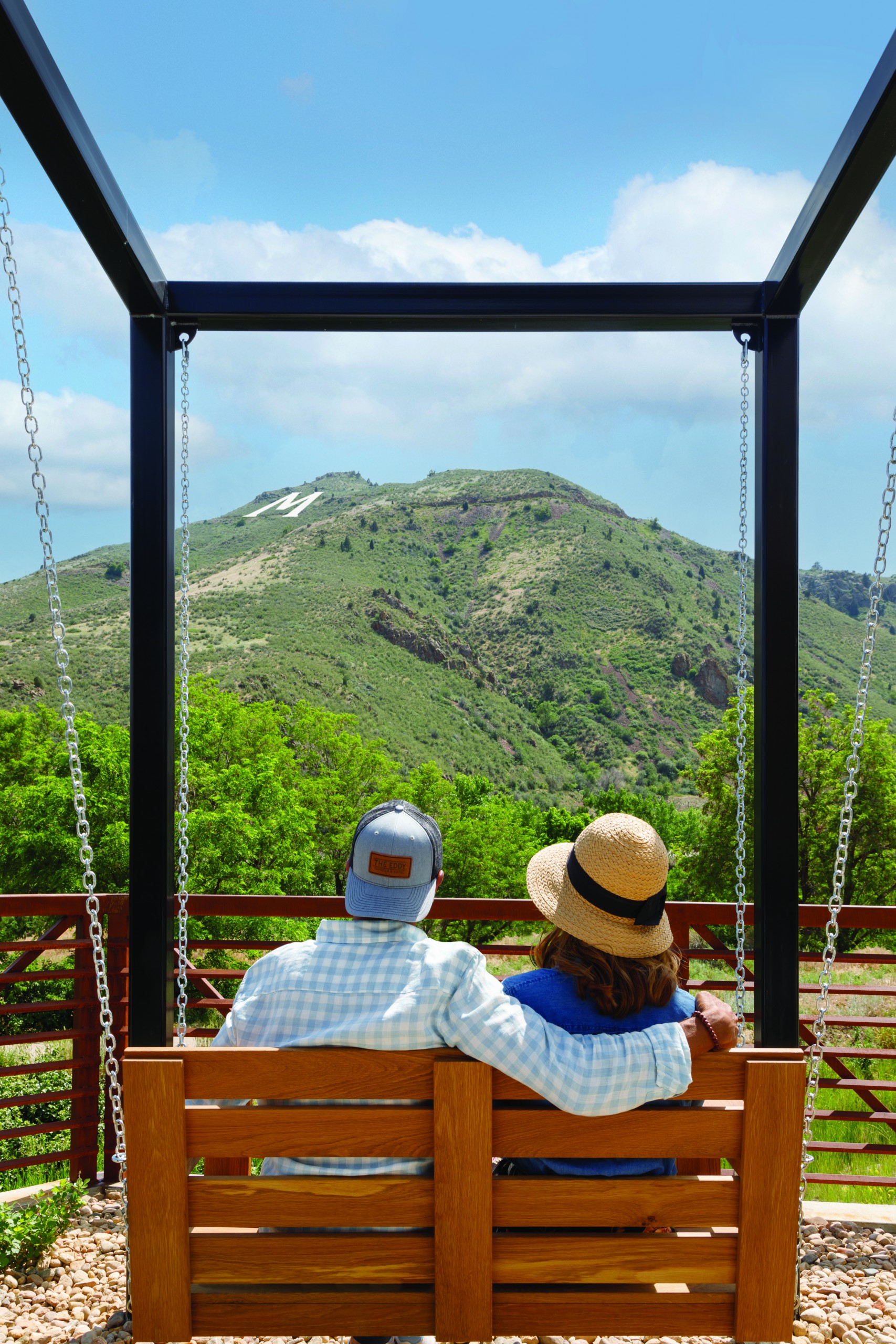 There also is the iconic Eddy swing situated to the west overlooking the bike path, creek and Mt. Zion. The large, wooden swing can accommodate multiple people and includes the distinctive Eddy logo on the seat. A large wire sculpture of a Colorado mountain big horn sheep will stand sentry over The Eddy’s lawn. At the entry side of the hotel, colorful picnic tables provide seating after ordering barbeque and milkshakes from Truck Eddy, the hotel’s food truck. 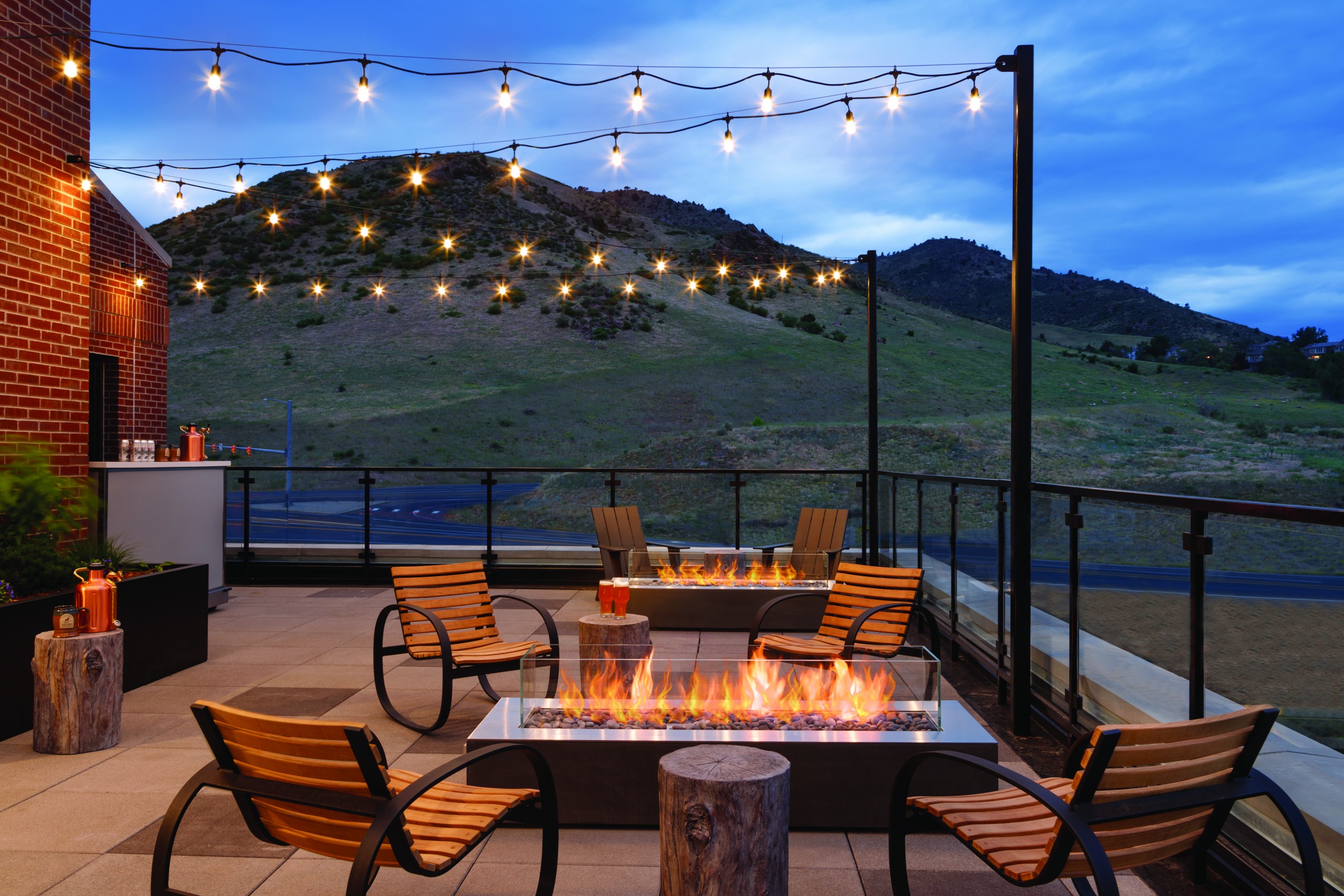 In addition to the lawn, rooftop decks on the east and west provide viewing of the magnificent Colorado foothills and Golden. Teak and metal rockers, firepits, chaises, unique custom concrete stump tables and more set the stage for guests enjoy the surrounding views.

To learn more about The Eddy Taproom & Hotel, visit theeddygolden.com.

A Picnic With a View