A Home with a View

The home's unusual star-shaped exterior takes full advantage of the building site. All of the home's windows were custom-built during the remodel. 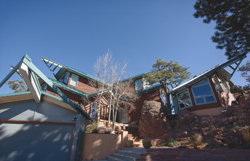 The home's unusual star-shaped exterior takes full advantage of the building site. All of the home's windows were custom-built during the remodel. 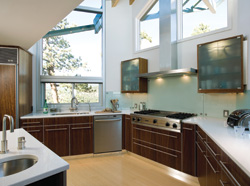 Angular skylights and a whole wall of windows give the illusion of cooking outdoors. “The kitchen is the most amazing kitchen I've ever seen in my life,” Cynthia Kendall marvels. “You can feel like you're part of the outside even when you're inside.” 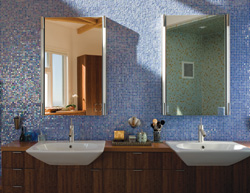 Iridescent mosaic tile glistens in the sun-splashed master bath. “The idea is there's a wet side and a dry side of the master," architect E.J. Meade says. Reflected in the mirror are the dry side's built-in armoires and dressing room. 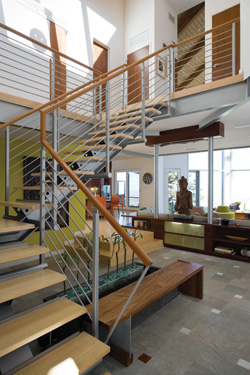 The floating steel and bamboo staircase was hoisted into place through an open skylight. "Remember, the house is on a cliff, so getting the staircase in was a huge challenge," Meade says. But the effort was worth it because the see-through stairs add  visual drama to the contemporary home. 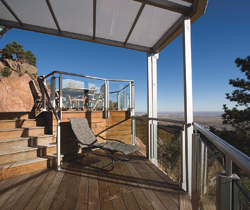 The steel and glass guardrail around the outdoor dining area is designed to block prevailing winds without compromising the panoramic views. When Cynthia and John Kendall first laid eyes on this custom-built home 15 years ago, they fell in love with it. But it was destined to be a troubled relationship. “We loved the structure, the windows, the architecture, the views,” Cynthia remembers. The only problem: “The interior wasn’t quite to our taste.”

The quirky, star-shaped home is perched on a ridge just seven minutes from downtown  Boulder. The panoramic views extend west to the Continental Divide and east to the plains. When the Kendalls bought the house, a central staircase and buffed sandstone fireplace dominated the main rooms. “We lived with the home for a while and realized the builder had cut a lot of corners,” Cynthia says. “It was tired.” The windows leaked and let in a constant draft. The floors sagged. A chimney blocked the views. “But we saw through the hideousness and looked for the potential,” she adds.

Architect E.J. Meade of Boulder-based Arch 11 says the old house was a bewildering mix of Star Trek and hippy chic. But little is left of the original interior. “This is probably one of the most radical transformations we’ve ever made,” says Meade, whose 14-year-old firm specializes in highly crafted modern residences.

The transformation took nearly a year. Now the 4,500-square-foot-home feels sophisticated and sleek. The remodel takes full advantage of the home’s views, and the distinct mix of textures, finishes and clean lines gives the entire space a comfortable, contemporary vibe. To achieve this feel, the Kendalls made one unusual request: “John wanted it to have some of the elements of a New York nightclub,” Meade laughs.

First, the chimney and chunky stairway were replaced with a steel and bamboo floating staircase that seems light as air but weighs as much as a small car. A giant crane lifted it over the house and lowered it into place through a small skylight.

In the living room, to make the space evocative of a sophisticated New York nightclub, Meade created built-in couches and bookcases, which streamline the room and direct attention to the room’s impressive views. “I love sitting here and looking into the house, as well as looking out at the views,” Cynthia says.

Visitors would never guess the living room’s big secret: Tucked behind the main sofa is a giant 5-by-7-foot television screen. “You just press a button and the screen rises up to the level of the first window,” Cynthia says. At night, the screen is framed by the moon and stars. “I think it’s pretty clever,” she adds.

The kitchen remodel is even more drastic. Building codes prevented Meade from changing the footprint, so he created new spaces inside. He put the entire kitchen on a platform to separate it from the rest of the home. The sleek cabinets have a veneer of imported African Etimoe wood, known for its colorful grain. The nonporous Zodiaq® countertops, made primarily of quartz, ensure clean-up is easy.

To allow natural light into the once-dark kitchen, Meade designed an entire wall of windows capped by skylights. “The kitchen is the most amazing thing I’ve ever seen in my life,” Cynthia says. “It has incredible light.”

Creating this soaring contemporary remodel took patience and persistence, but it was well worth the effort. “The craftsmanship is exquisite throughout,” Meade says. “It works really well as a living space during the day and great as a party home at night.”

The test of a successful remodel, of course, is whether the homeowners are satisfied. “E.J. has a great sense of style,” says John, who believes he got his New York nightclub. At a recent party, he says, go-go dancers entertained the Kendalls’ guests while purple accent lights hidden in the built-ins cast a festive glow. Day or night, this contemporary masterpiece works well. “I really love it,” Cynthia says. “I enjoy it every single day.”