The Boulder homeowners say the experience was a brilliant, sanity-saving hack 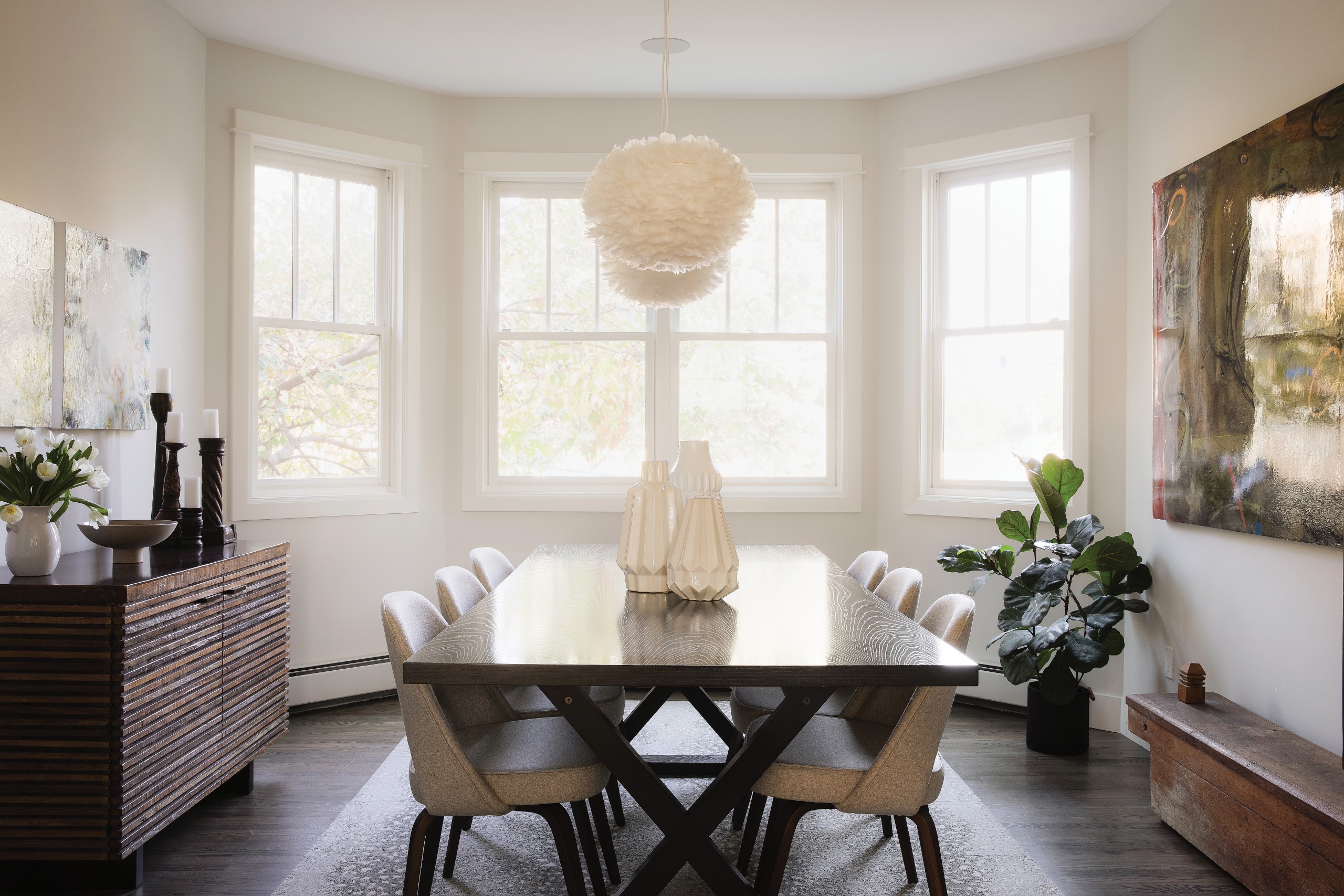 A Splash of Color The homeowner’s existing mid-century table set a slick tone in the dining room. In lieu of glass globes, Designer Megan Daughtry of Proud House swapped in a pair of Eos feather pendants by Umage. “We replaced all her chairs with tactile upholstered velvet options,” the designer says. “One of the things we wanted was to bring some color into the room, and she had wood chairs that matched the table—it was all feeling really dark.” The antelope patterned rug is by FLOR carpet tiles, so if one of the 19.7” x 19.7” tiles ends up stained, it can easily be replaced. | Photography by JC Buck

THE PROJECT: Anyone who has ever tried to buy a fully updated house in Boulder knows that it can be harder than a free solo up one of the Flatirons. It’s a problem Kim Hullett, a premier realtor for PorchLight Group Boulder faces often, and one that leads to another recurring challenge—helping clients envision how a remodel can indeed create magic in tight, less-than-ideal Boulder floor plans. So, the innovative realtor decided to use her own home as a showpiece to illustrate what a revamp can do, enlisting the help of the design team at Proud House Studio & Co. and Keith Donahue of Cumberland Construction.

Built in 1999, the house she shares with her husband is “in a great location but had a chopped up layout and dated finishes,” says Hullett. Not wanting to bite off more than they could chew, Hullett and her husband decided to take the upgrade one floor at a time, camping out in the basement for each layer. 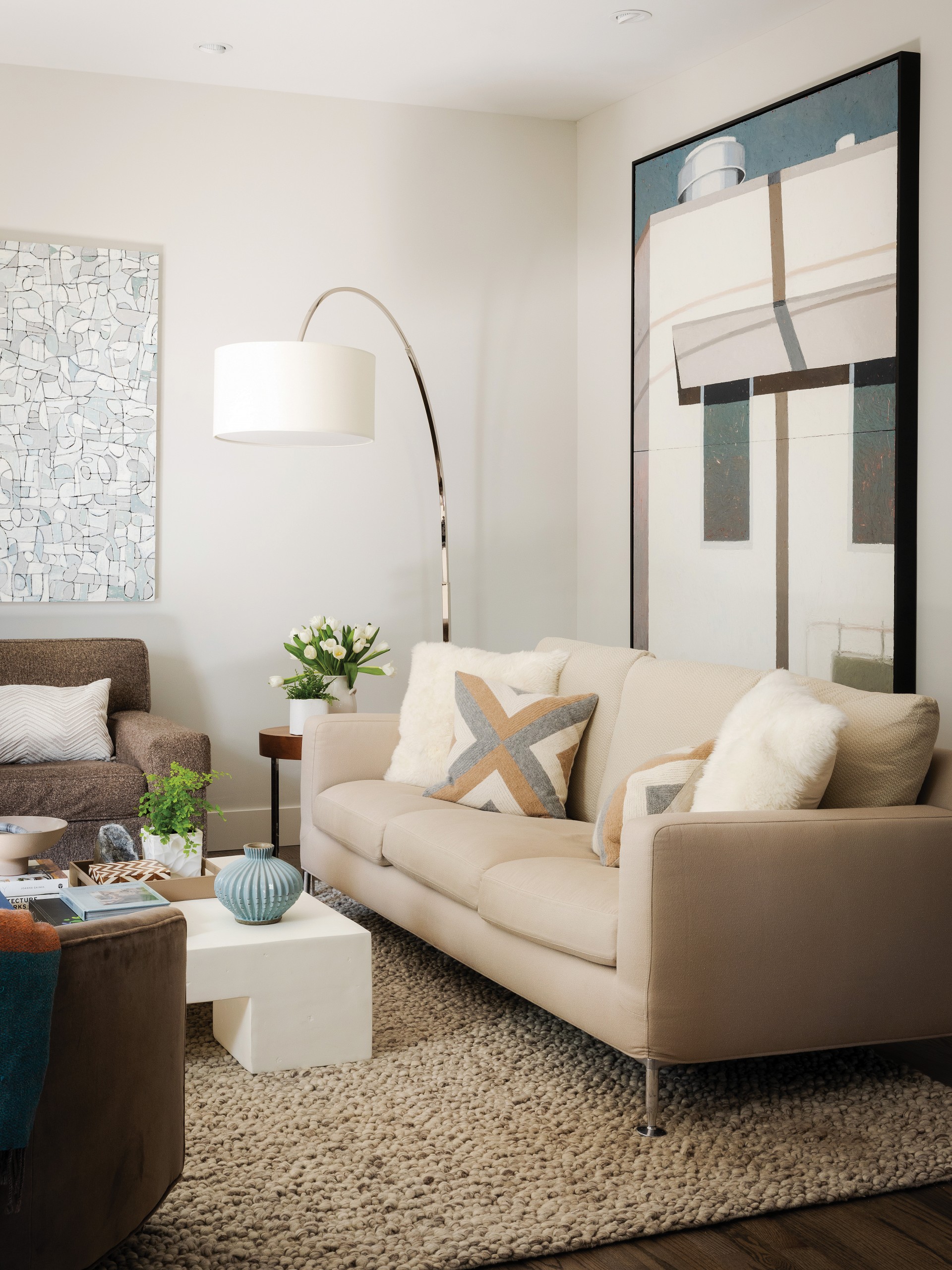 A Truly Living Room “We added a pretty pebbled wool rug for texture and warmth, and to ground the sitting area,” Daughtry says of the main living area. The plaster cocktail table by Mitchell Gold + Bob Williams echoes the architectural minimalism of a painting the clients found in Aspen. “I call this style between mid-century and Bauhaus,” the designer says of the look. Painting on left: Blue Abstract by Blair Vaughn-Gruler from Walker Fine Art. Architectural painting on right: Sharon Feder from Michael Warren Contemporary.

THE SPECIFICS: With three kids in college, the Hulletts could finally feather their now empty nest just how they wanted. “The style of the architecture was new Victorian, so one of the goals was to un-gingerbread the house in general,” says Designer Megan Daughtry, owner and principal designer of Proud House Studio & Co. Modernizing the mouldings and keeping the color palette serene, including painting all walls Benjamin Moore Silver Satin (a grayish white), put the focus on the art, much of it curated by Kim with the help of Kate Meyers of Kate Finds Art (full disclosure: Meyers is the editor-in-chief of this magazine).

“One of the biggest things we did was make the kitchen twice as big as it was in the original configuration—it is now 365 square feet, and it was 150 before,” Daughtry says. “It was separated from the living room with a bar-height, 42-inch wall that really interrupted the flow and cut off the ability for the kitchen to grow.” They also replaced a series of narrow windows on the east wall with a 12-foot-by-8-foot sliding door to create the ultimate entertaining spot. “Before, we didn’t have full integration between our backyard and the kitchen and living space for meaningful indoor/outdoor living,” Hullett says. “Now we do.” 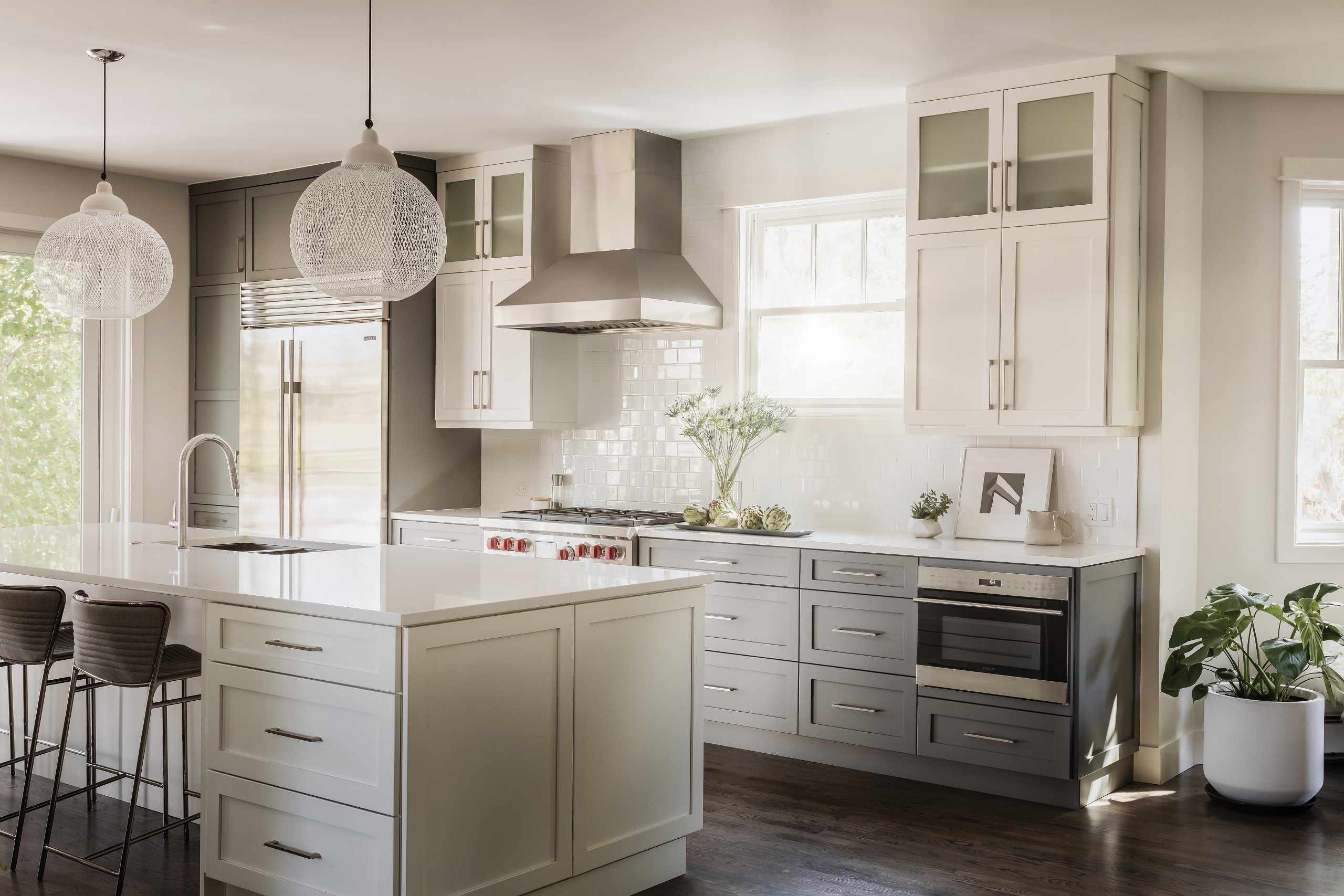 An Airier Kitchen Because the previous kitchen layout was downright “weird”—including an island with a cooktop turned the wrong way and a sink up against a wall—they “really thought through what was possible, looking at all the adjoining spaces and expanding the kitchen,” Daughtry says. They even took out a window so the space would flow better. “There was a high window, and I think they thought, ‘Oh, we have to keep it.’ Why? You could barely see out of it, and you were looking at the neighbor’s fence,’” Daughtry recalls.

THE HIGHLIGHTS: To be as eco-friendly as possible, the couple opted to keep the existing floors—formerly a dark espresso hue—and have them sanded and stained in a custom mixed gray-brown by CJ of Woodwise. “It’s so much more green to salvage wood floors!” Daughtry says. Throughout, the designer employed a subtle touch of sparkle for a note of contemporary elegance.

“When Kim described her style, both for interiors and fashion, she told me, ‘I’m a woman who wears jeans every day and a great white shirt, but I like a little bit of sparkle—like a pair of diamond earrings.’ She asked us to help her create a home that captured her essence—classic, fun, and easy to live in, with a little bit of sparkle.” 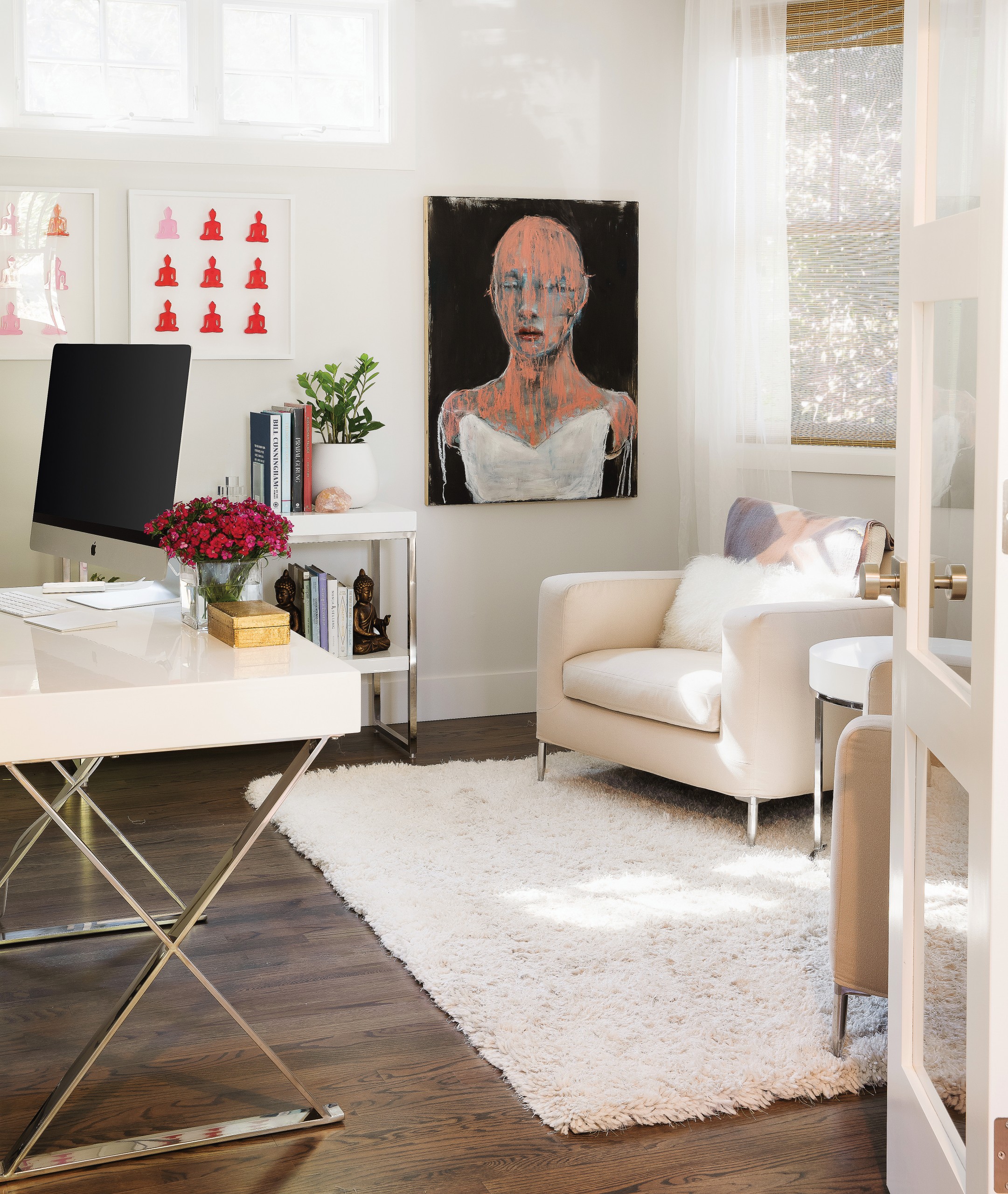 The WFH Office Art has pride of place—and provides a major inspiration boost—in Hullett’s home office. “She personally started collecting art when she was 25—so all her life she’s appreciated it,” Daughtry says. A blush pink imbues the room with cosseting warmth. “Her brand colors are pink, white, and cream, so she had a theme going on,” the designer says. The modern campaign desk is by Jonathan Adler. Painting by Michael Dowling.

PHASE TWO: The homeowners have moved into the basement again while the second floor is reconfigured with a new owner’s suite. The spa-like bathroom will be complete with a sauna and soaking tub, and they’re taking over a kid’s bedroom so that they can get the glamour walk-in closet of everyone’s dreams, Daughtry says.

Hullett says living at home during a remodel works for her, but it isn’t for everyone: “If your tolerance for noise and organized chaos is low, I would highly recommend moving out to a short-term rental. However, since we no longer have children at home, it has been great to actually be on site as it makes collaboration with our design team on last-minute decisions easy, and the money we’re saving on rent is going into more luxurious choices for our lighting, appliances, and cabinets.”

The result? “Now we use every inch of our home to its fullest,” she says.