It all started in a cowboy bar. “I was new to Denver and looking for a place to have a drink,” says Kamil Tazi, co-owner of the Tazi Ranch. “My brother and I were having dinner together and took the advice of our waitress to visit a place called Rodeo. [The movie] Urban Cowboy was a big deal at the time, so it felt like a natural option for us.” It was there that Tazi’s younger brother first spotted a striking woman named Glo.

“Kamil’s brother spoke to me first,” Glo says. “But I knew immediately he was too young for me, so I said, ‘Introduce me to your brother.’ That was 1980, and we’ve been together ever since.”

Now grandparents, the couple’s latest project is the work of a lifetime. Their property, the Tazi Ranch, is a 135-acre parcel that rests in a wildlife-laden valley in Douglas County. Fittingly, the property reflects Kamil’s Moroccan heritage and Glo’s love for the land and all things equestrian. “We lived in Douglas County for 22 years and were aware of the valley and its beauty,” says Kamil, the COO of an independent oil and gas company, “so when the opportunity to buy came up, we jumped on it.” 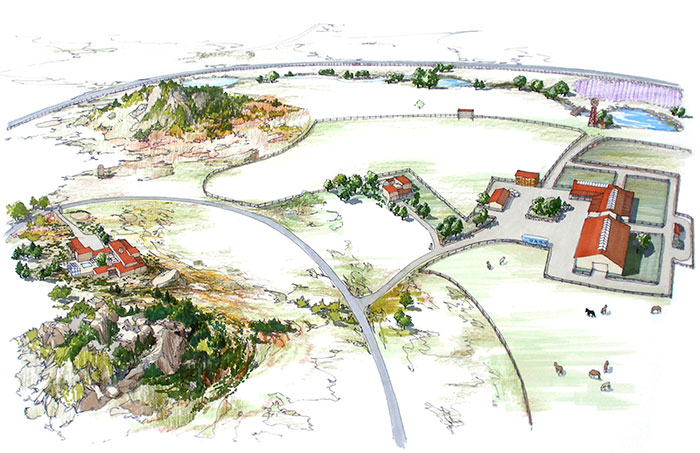 A schematic shows the layout of the ranch. The landscape determined how the various structures would work together across the property. Each building has its own personality while contributing to an overall sense of cohesiveness.

“It’s funny,” Glo says, “Kamil is such a city person, and I’m a country person, but he knew this piece of property was the place to realize our dream.” The Tazis have placed the property into the Douglas Land Conservancy to preserve it in perpetuity from further development.

Once they had secured their spot, the Tazis enlisted Brandt Vanderbosch, principal of Vertical Arts Architecture, to help them accomplish the vision for their home and equestrian facility. “This was a pivotal project for us,” says Vanderbosch. “We considered every square inch of the incredible site features of the property to ensure every part of the ranch was in sync.” 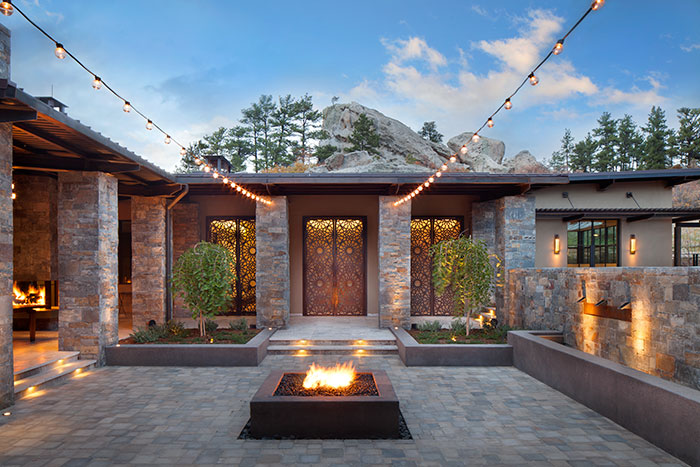 The Moroccan influence was a natural for Kamil, who, along with his parents and two siblings, immigrated to New York in 1966. “My parents were part of the Moroccan delegation to the 1964 World’s Fair in New York, and my mother convinced my dad to immigrate to New York City two years later because she had enjoyed the experience so much,” Kamil says. “The idea of the interior courtyard surrounded on all sides by rooms with views is modeled after the house I grew up in in Casablanca.”

Other Moroccan influences include organic materials such as plaster and stone with bursts of zellige, a Middle Eastern approach to tile work. These elements paired well with the couple’s other design wishes: windowed walls and deliberate, clean lines. 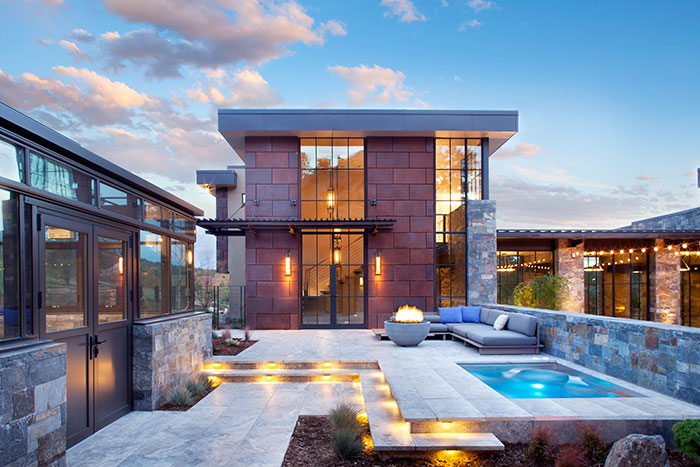 A private and protected outdoor relaxation space echoes the clean lines of the overall structure.

“I feel like I’m the luckiest person in the world living here, like I’m always on vacation at some wonderful resort.” — Homeowner Glo Tazi 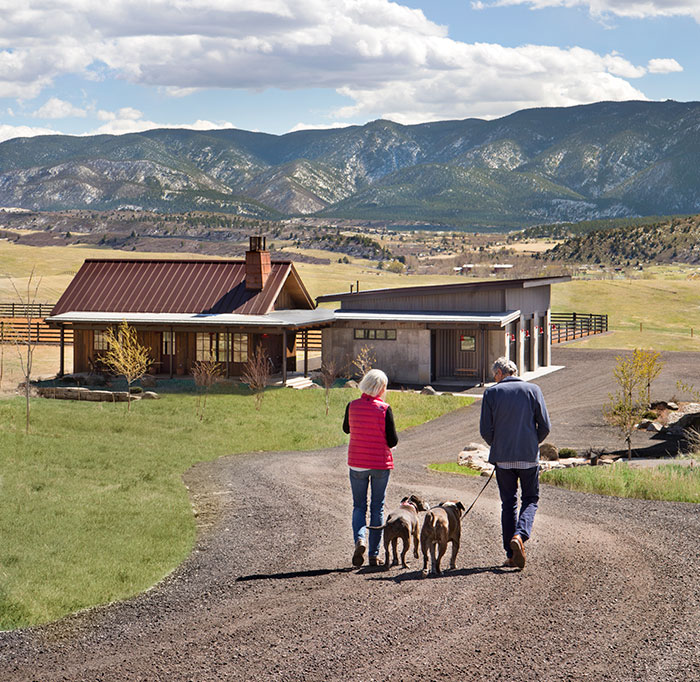 Glo, who has been an avid equestrian since her retirement from modeling, now has a massive space to devote to her animals. As the manager of the ranch, she enjoys breeding horses and sponsors a champion reiner, Hollywood Golden Gun. The ranch is also home to 10 horses, three miniature donkeys and two rescue pit bulls.

Upon visiting, it’s immediately evident that Kamil and Glo have poured their hearts into creating this space. It suits them both—the businessman and the horsewoman—and it’s also clear that they pour their love and energy into it on a daily basis.

“Any spare time I’ve had in the last three years has been consumed by the realization of this project,” Kamil says, “but it’s worth every bit of effort as we want to ensure it’s around for a long time. We are passionate about preserving the area’s open ranges for the elk, deer and wildlife we enjoy.” 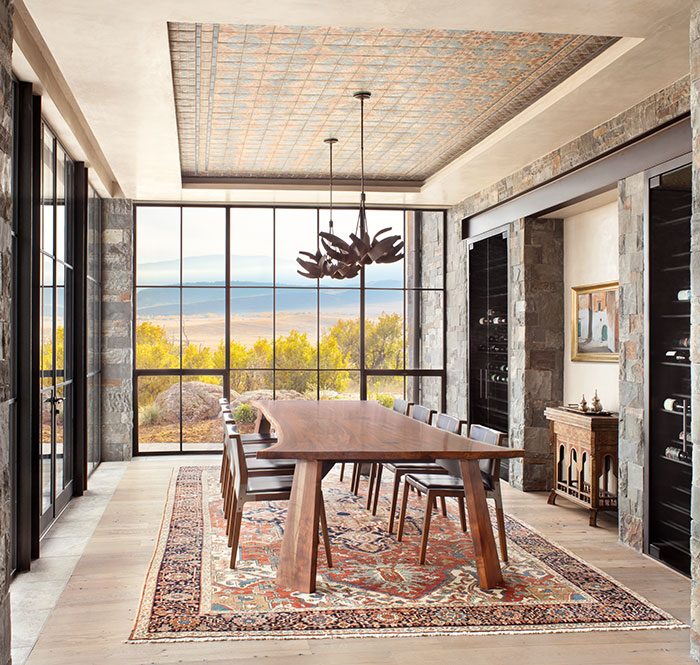 Understated, elegant furnishings allow the views to command top billing throughout the home. In the dining room, a Vertical Arts custom live-edge Claro walnut table made by Where Wood Meets Steel and Holly Hunt Hadrien chairs rest on an antique Serapi from Isberian Rug Company. Two Corona pendants by Hubbardton Forge hang from the rectangular inlay of painted Moroccan tile. A painting by Kamil’s mother, Rahma, depicting an alley seen from Chaouen in Morocco’s Rif mountains, hangs above the sideboard. 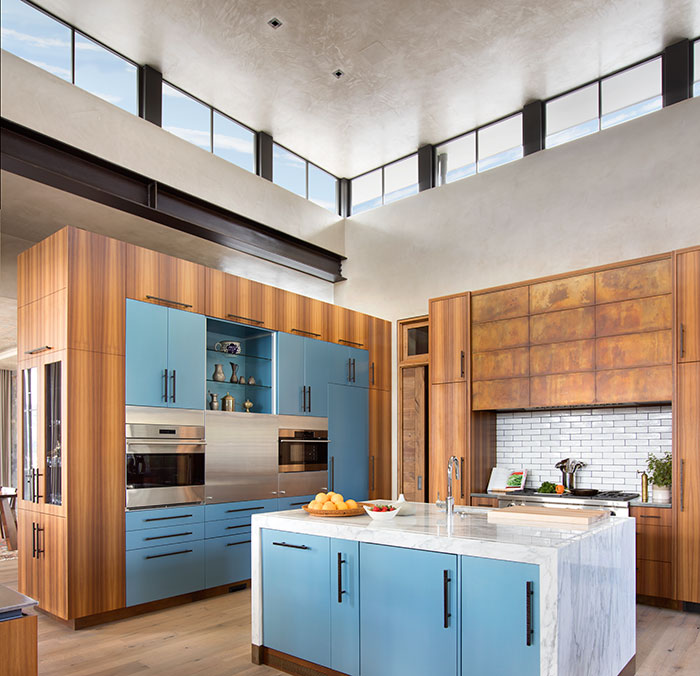 The bright and spacious kitchen combines a daring mix of materials, both rustic and modern. Nearly every component of the gallery is custom, from the center island of Calacatta Caldia marble to the metal finishes and inlays by Raw Urth Designs. Outer counters of blackened stainless steel and cavernous cabinets—a mix of larch veneer and light-blue metallic paint—bring a bold, fresh approach to the space. 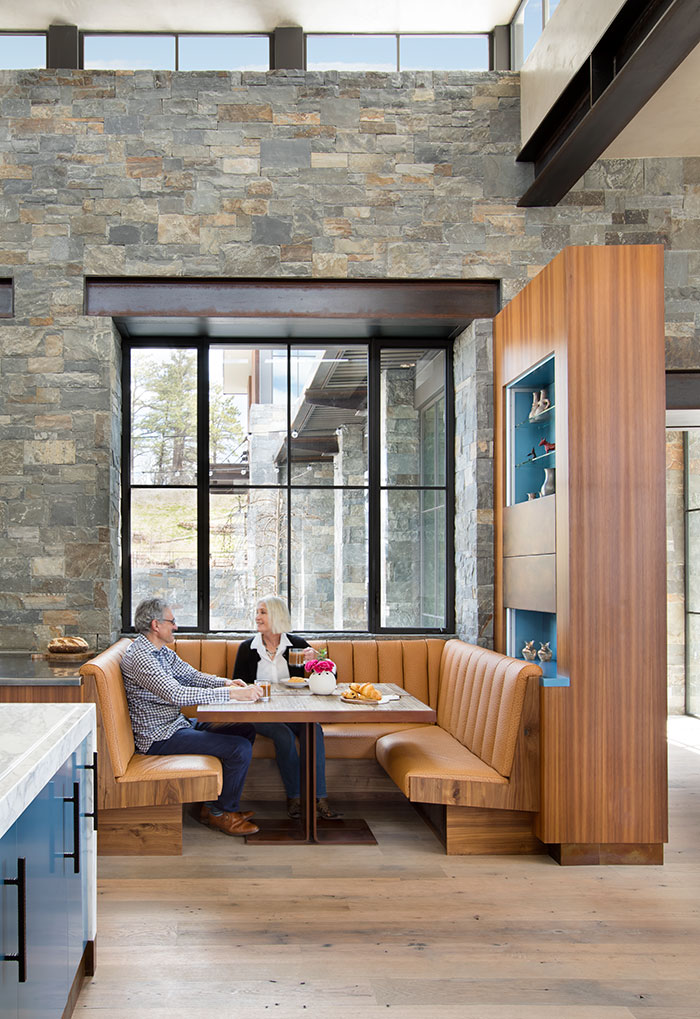 Homeowners Kamil and Glo Tazi enjoy breakfast on a custom banquette made from reclaimed boxcar planking fabricated by Twenty1Five and Raw Urth. 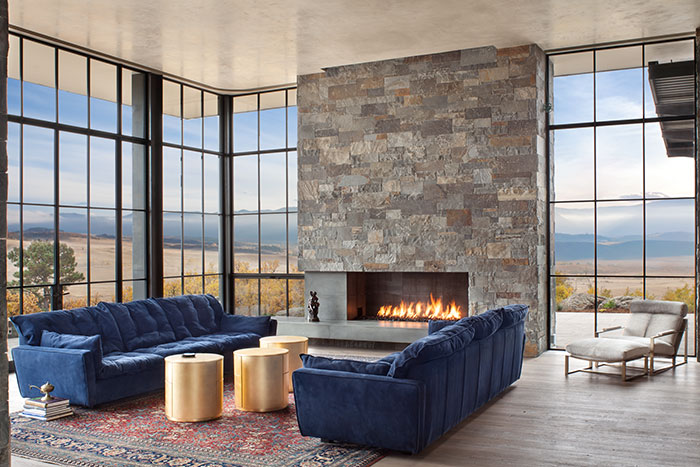 The great room provides picture-perfect views of nearby bluffs and distant foothills. A Spark linear fireplace with a rolled-steel surround and a Concrete Revolution hearth provide a textural contrast to the Baxter Sorrento sofas in sapphire leather.

“The great room is my favorite room in the house. It’s very comfortable, and the window walls bring the outside in.” — Homeowner Glo Tazi 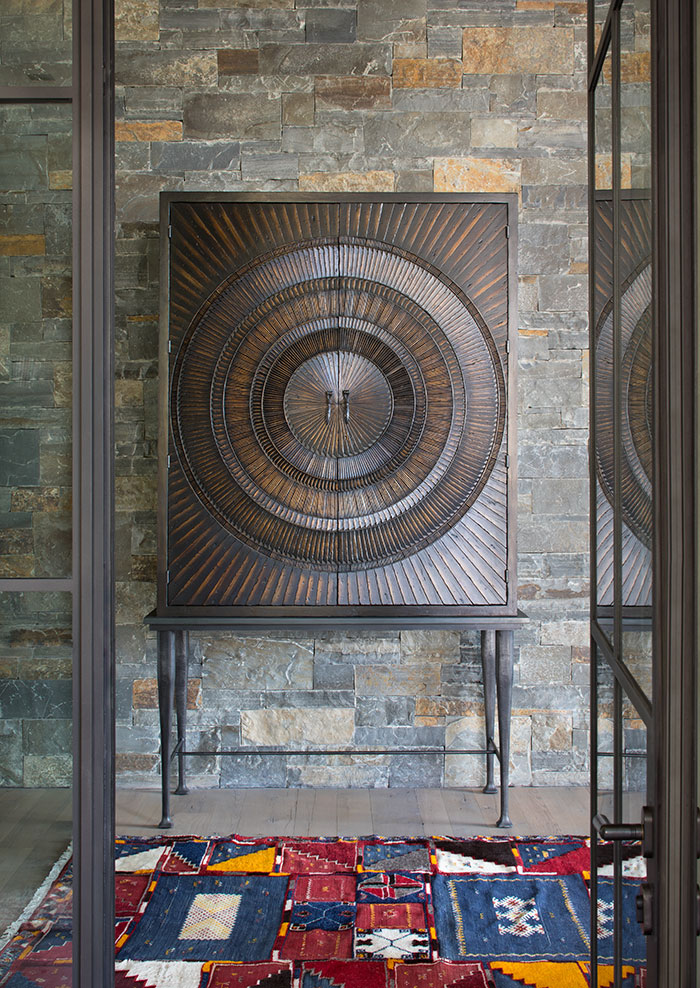 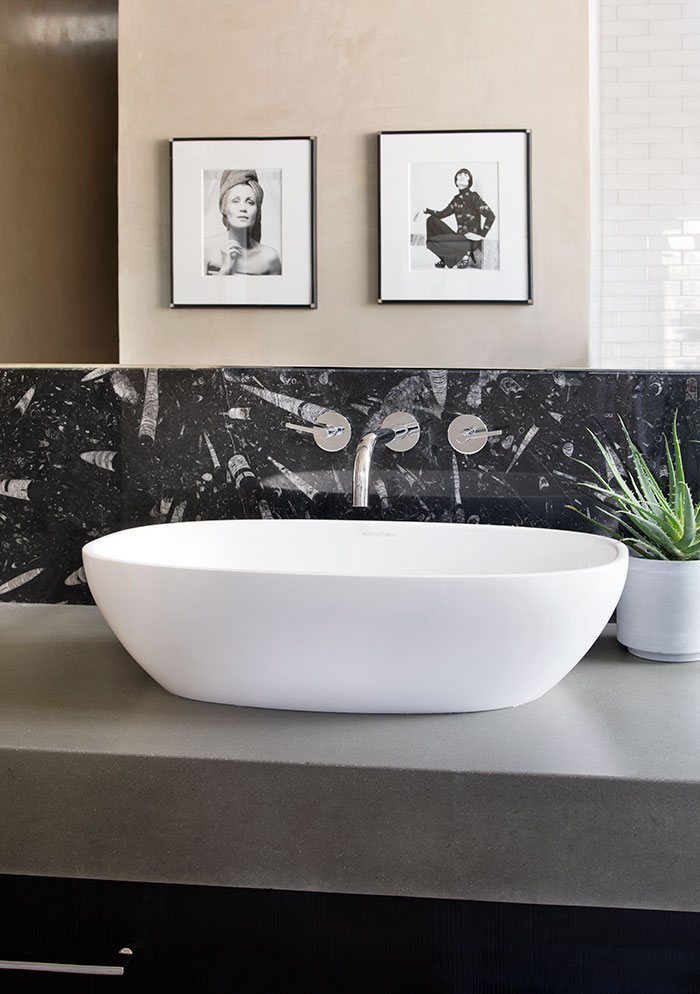 A Victoria + Albert sink sits atop a concrete countertop, while Nero Fossil marble creates a striking backsplash; photographs of Glo from her modeling days are reflected in the mirror. 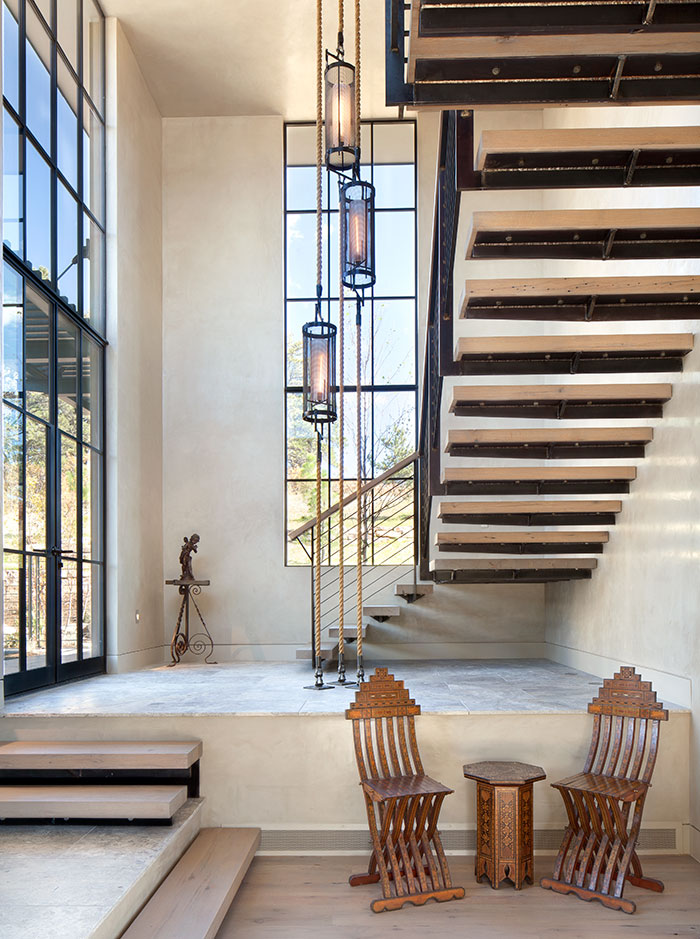 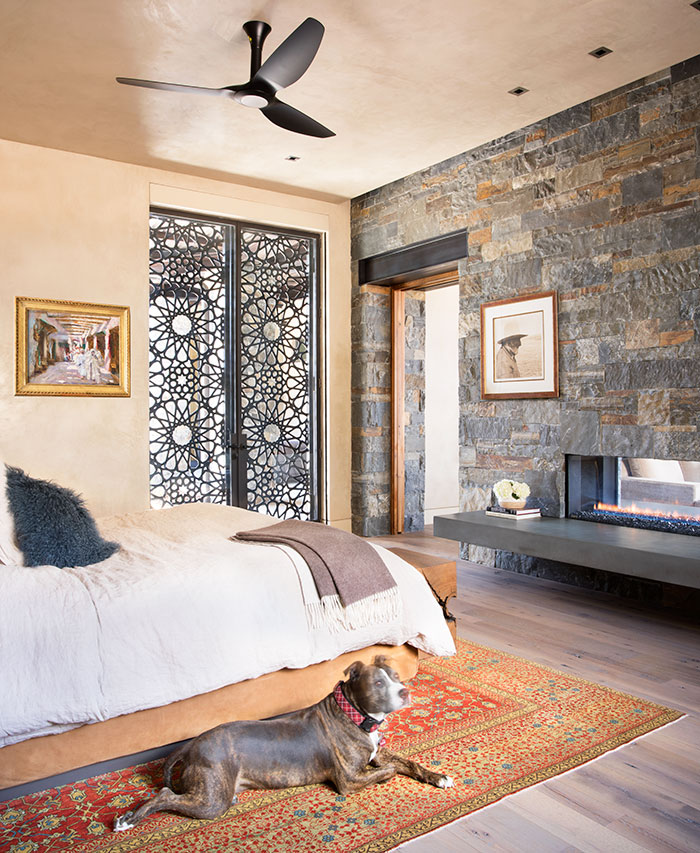 Beloved pit bull Peeka is at home in the master bedroom, where a Concrete Revolution hearth is a focal point. A Turkish rug from Shaver-Ramsey grounds a Flou Gentleman bed in Nabuk leather. A portrait of Lakota leader Frank Fools Crow, photographed by Robert Alan Clayton, hangs by the fireplace. A vintage Moroccan oil painting from Kamil’s collection hangs next to the bed. Vertical Arts designed the iron doors in traditional Moroccan shapes. The custom pattern was fabricated by Parasoleil. 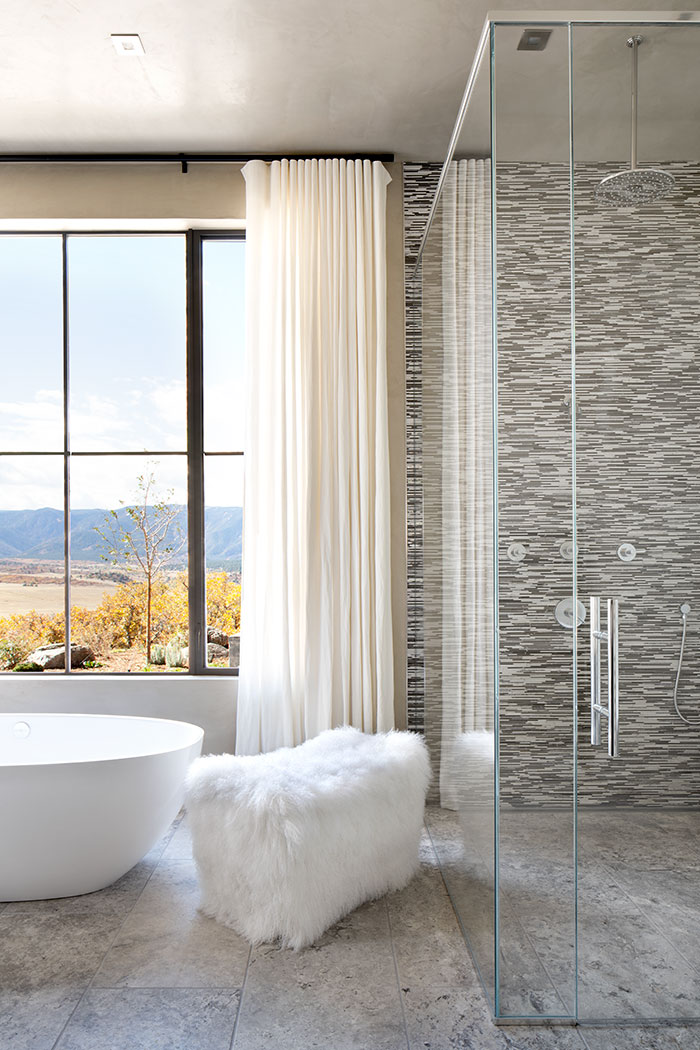 The master bathroom, tucked within the Tazis’ sleeping suite, is a haven in itself. Tumbled silver travertine floors and an earthy combination of Tomei glass tiles in the shower absorb the warm glow of incoming sunlight. 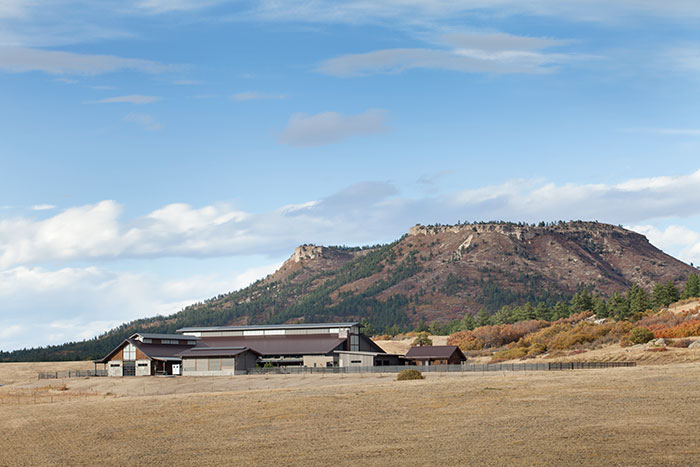 The equestrian facility consists of multiple buildings, including a main barn and indoor riding arena, a bunkhouse and machinery garage and a hay barn. 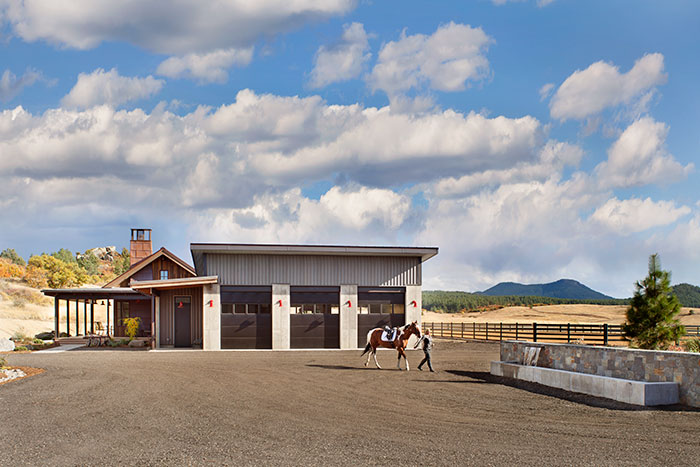 The bunkhouse (shown above) is fronted by a water fixture that organically flows from the stone trough. The fence to the right of the bunkhouse is part of the ranch’s outdoor riding ring. 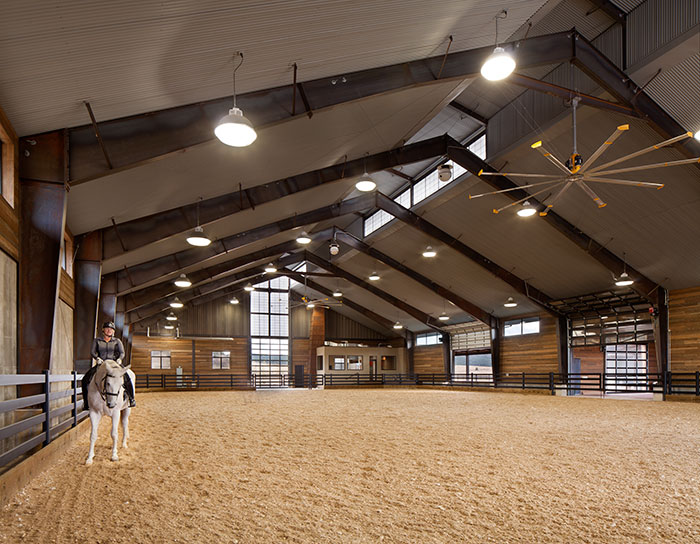 The riding arena reflects the ranch’s overall linear design theme, including the use of organic materials, glass and plenty of scenery. Even the horses’ stalls frame majestic views. 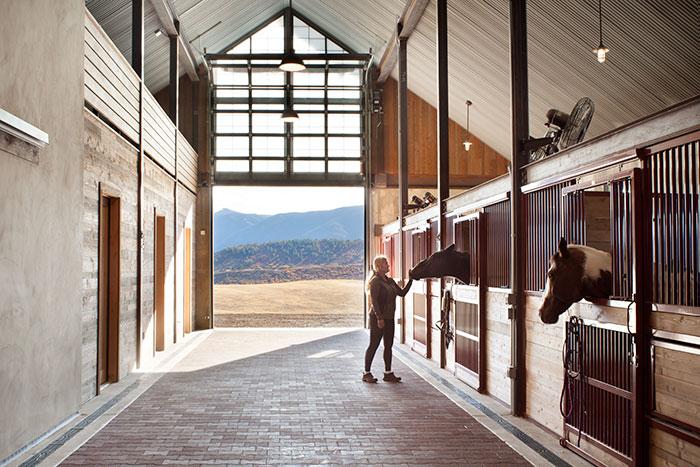 The ranch’s horse trainer, Laura Ware, is pictured in the barn, which incorporates a variety of materials, such as rusted steel, wood siding and a unique palette of stucco to give it authentic Western character. 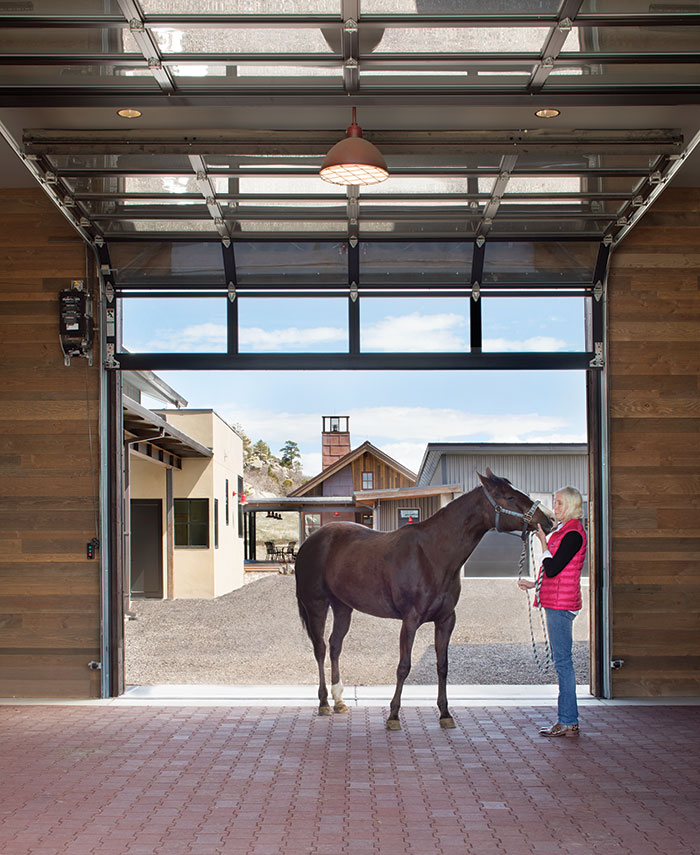 The glass garage doors of the main barn provide a perfect frame to the bunkhouse beyond. Glo’s horse Pele sneaks in a smooch while on the way back to her stall.