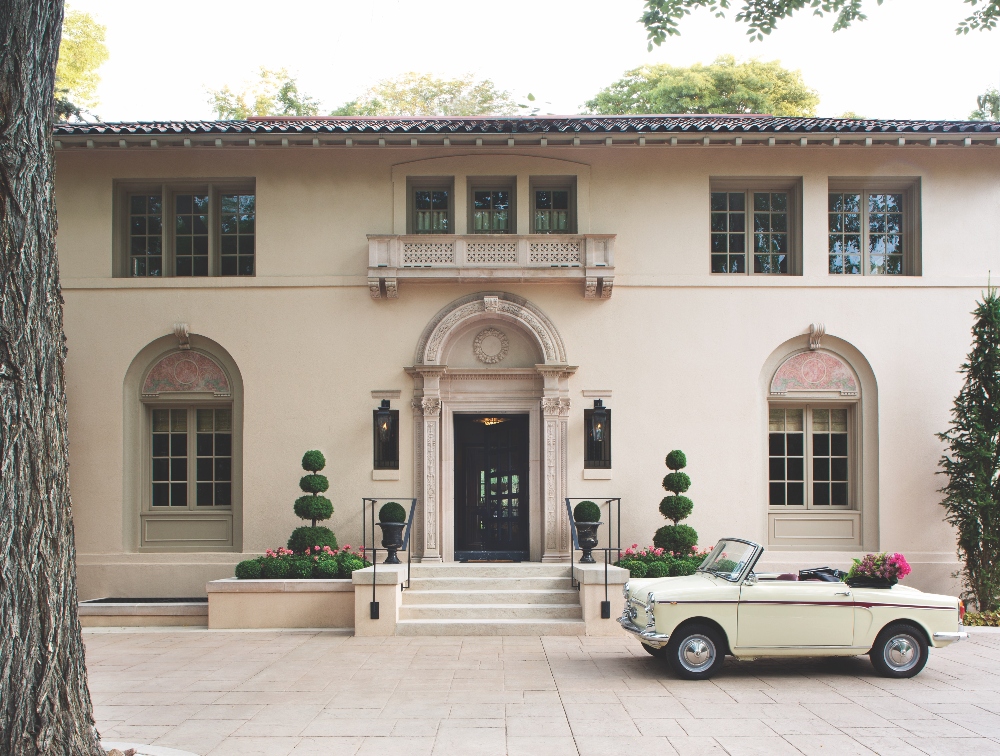 Once upon a time, a prominent Denver businessman fell in love with the house across the street. He bought it, thinking it might need “a little cosmetic work,” his now-wife remembers. The 100-year-old house was fondly reminiscent of the homes in Southern California where he spent his childhood. It was also 12,000 square feet on a 1.2-acre lot and loaded with historic elements. The house felt like home. That’s all he needed to know.

His first impulse was a minimal remodel to update the basics of the Maurice Biscoe design, but his significant other wasn’t quite convinced. After she moved from New York to Denver to begin a new life with her guy, tackling the renovation became her project. But, after seeing the “several hundred page” inspection report, she knew “minimal” was out the window.

The real-life process was no fairy tale. It involved nearly four years of construction, three architects, three builders and two interior design firms—one from each coast.

“He had always admired this house and knew it could be a very special family home,” she recalls. “I was excited to take on the challenge of making it extraordinary.” So, they cautiously began construction in January 2014 and let both the relationship and the renovation evolve from there.

“Though we agreed on the intended style and the architectural elements, we saw two very different things when approaching the project. He was so in love with the idea of the house, and I was more concerned with the condition and layout. We made a great team, because we shared the same vision but from different angles,” she says. “It was a quite a process, because we didn’t know what we wanted, so we started peeling back the layers. We needed to understand structurally what was there and what was possible.” 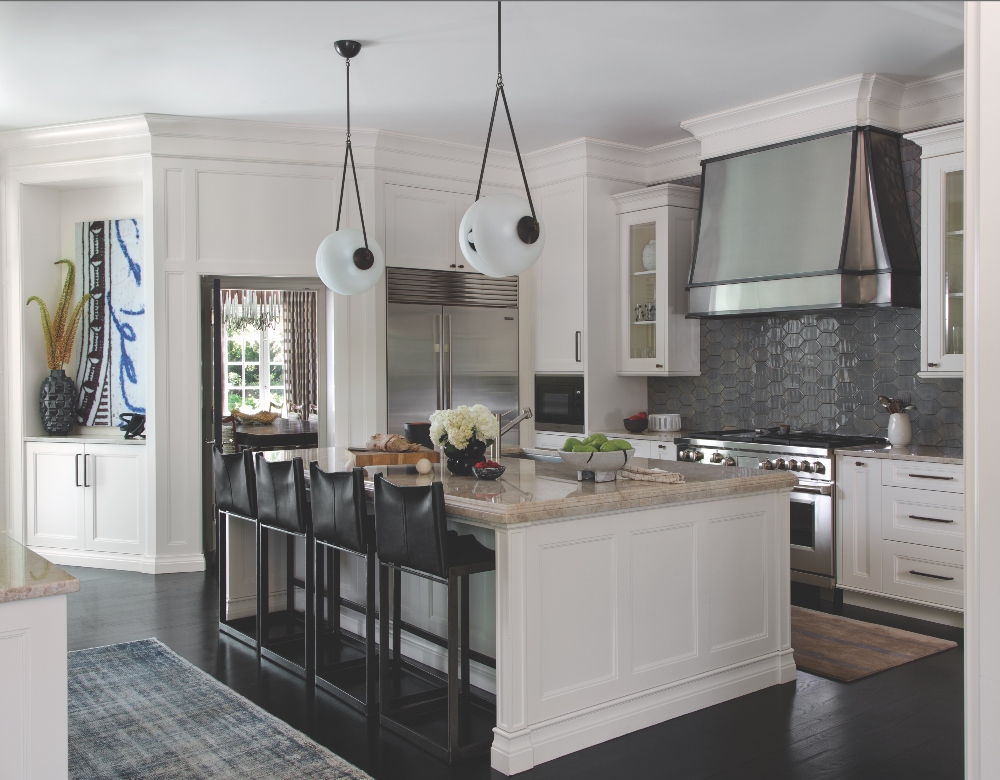 Kitchen Synapse pendant lights by Apparatus are suspended above a marble-topped island, with cabinets designed by William Ohs. Bar stools are from Lucca Antiques, and the rug is vintage. The art in the nook is by Hugh Scott-Douglas.

ALL HANDS ON DECK In addition to hiring a New York-based interior design group, the couple brought on two local architects: Carlos Alvarez to help with spatial layout and Pat Cashen to assess the windows in conjunction with the city’s Landmark Preservation Commission (he came back months later to work on the exterior elements, including the new pool cabana, and to be a local liaison to the design group). So while Alvarez was busy drawing new floor plans for all three levels and bringing in structural engineers, another team was removing roughly 100 windows to be refurbished and brought back to their original quality.

“There were lots of balls in the air at the same time. It was very complicated,” Cashen says. “With any old house, you need to assess what’s there—the condition of the house, the functionality, what’s worth keeping and what’s damaged. And while you’re doing that, you have to keep in mind the owners’ objectives with the floor plan. It’s a continual assessment and comparison with what you’re starting with and where you want to end up.” 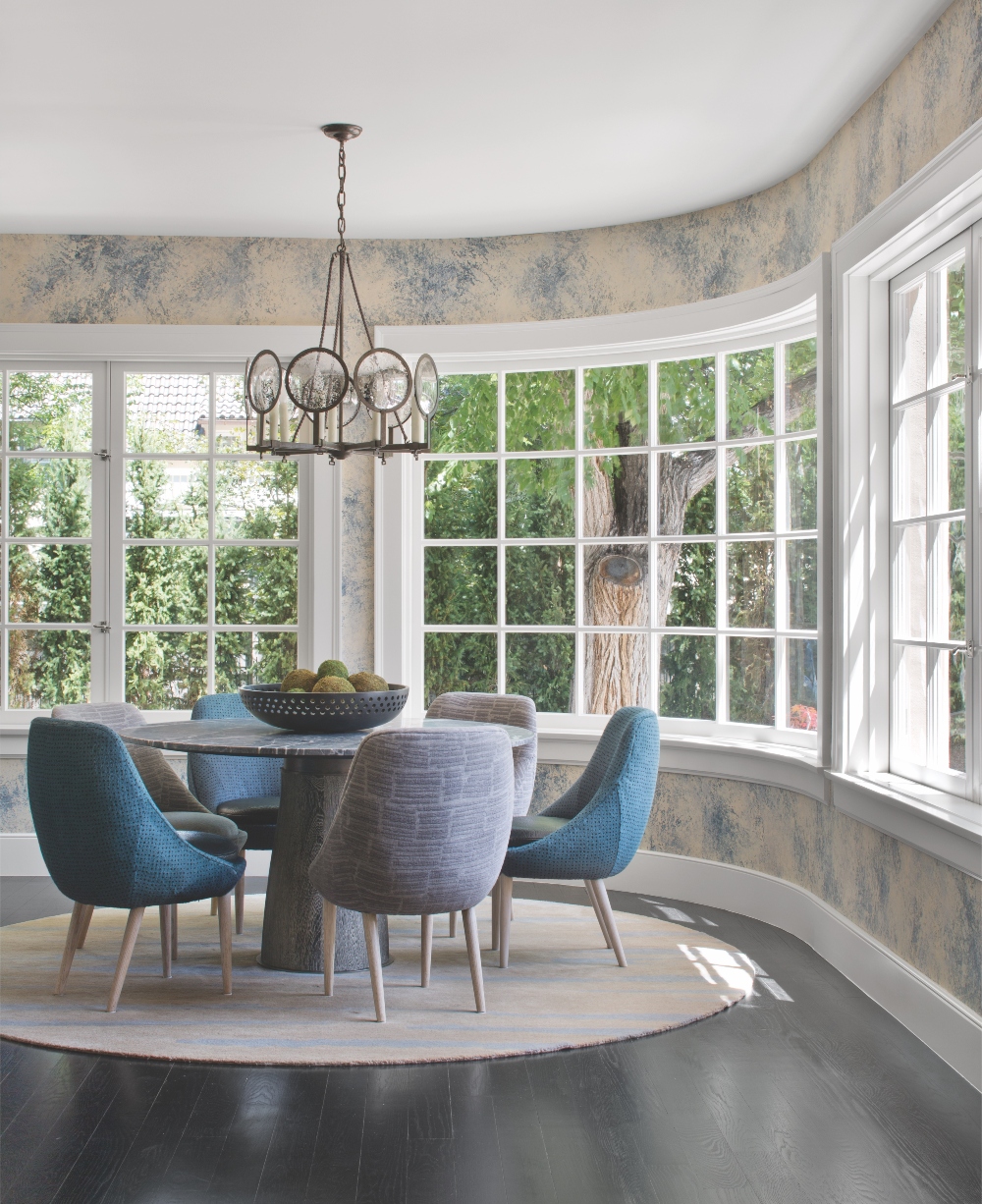 Nook In an alcove off the kitchen, chairs and a dining table by Kelly Wearstler sit atop a rug by Christopher Farr. Custom hand-painted wallpaper by Darren Franks & Associates serves as a backdrop for the inviting space, while a McLain Wiesand Carousel Chandelier hangs overhead.

LOOKING INWARD The interior elements also proved to be a challenge. The owners decided the dining room and great room had the most historically and stylistically important elements, so they wanted to keep those two rooms as the baseline for the rest of the project. “To demolish a whole house around just two rooms was a struggle,” the homeowner says. “There were so many renovations to the house over decades that resulted in a loss of cohesive quality and character. But those two rooms remained true to the house.” The team worked diligently to match everything in the new areas to the original crown moldings, baseboards, mantels and millwork.

“We basically built a new home in the shell of the old house, while addressing the whole site to maximize its use,” Alvarez says. “It was great to bring it to its full potential.” The team created a new front facade on High Street, rebuilt the solarium and reconfigured the back yard, which was underutilized because of a swimming pool in the center of the lot. By the time the couple married in 2015, the renovation had taken on a life of its own. “It was a battle,” recalls the homeowner. “It was a lot of trial and error, because it was such a massive project. We redid every square inch of the house and lot.” 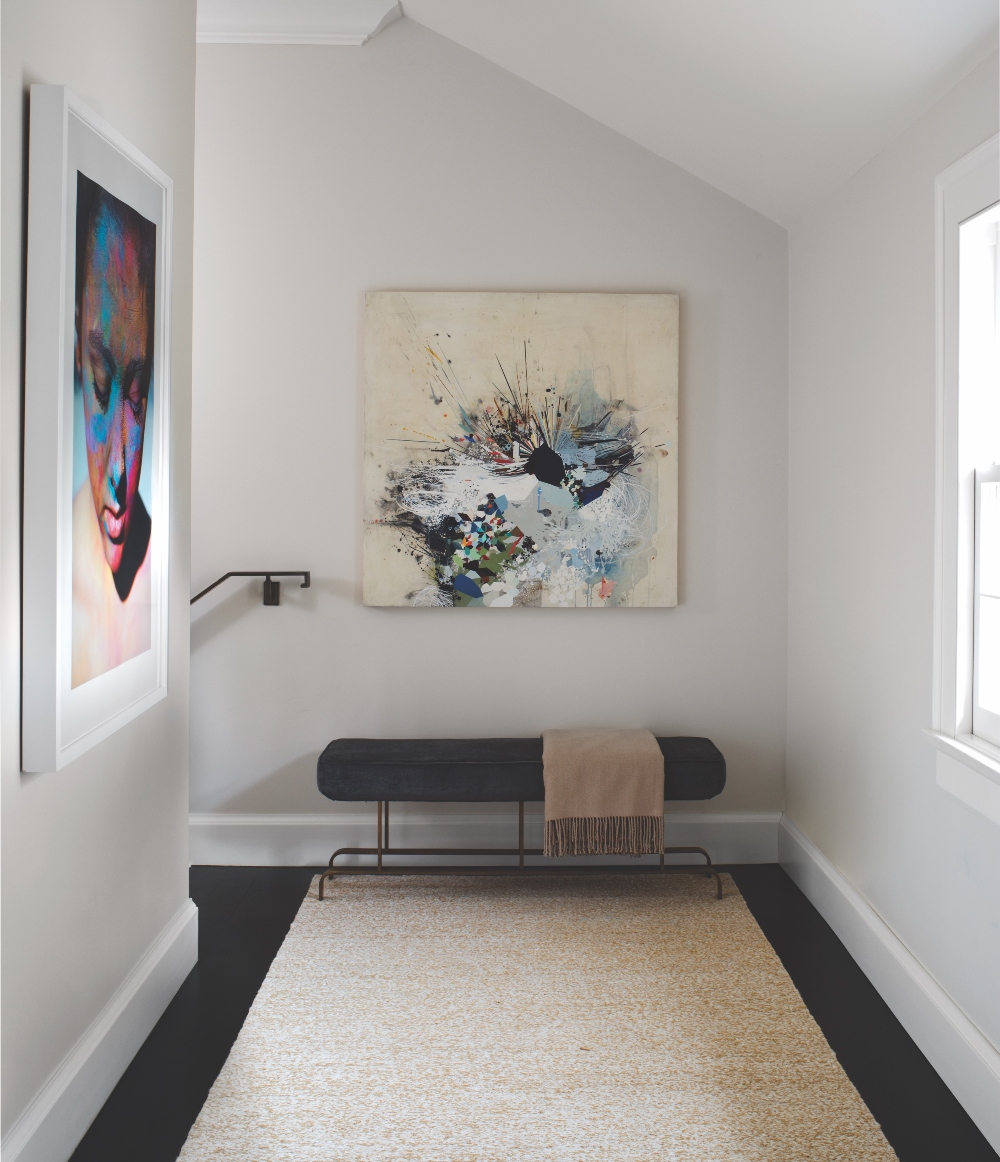 Hallway In a second-level hallway, a painting by Reed Danziger is placed above a vintage bench. The photo is by Grace Fries, and the runner is by Christopher Farr.

COURSE CORRECTION One builder came up short, so another was ushered in. The first interior design team was not a fit, but fortunately the homeowner’s sister-in-law is a close friend of iconic designer Kelly Wearstler, so they reached out to her in Los Angeles. To their elation, she agreed to the job—her first in Denver.

“Kelly only does houses end-to-end, so this was a huge favor to us. We wanted a sophisticated, elegant look with a quirky modern edge,” the homeowner says. She’s from the East Coast, while he hails from the West Coast, so they blended their styles and found a timeless, eclectic aesthetic to complement their large contemporary-art collection. Although the design was nearly 30 percent completed, Wearstler and her team were able to finish the project and put their own funky spin on it, from textural fabrics to jaw-dropping lighting and a grand entryway design.

The couple finally moved into their home late in 2016. It was still under construction, but they were just happy to be there. “We wanted a really beautiful space to entertain in, but we also wanted a family house. So we had to have it fit both ideas,” she says. “We did that by making the main floor the mature, grown-up floor; the basement the fun zone; and the upstairs our family-functioning floor.” A kids’ living room on the top floor provides an alternative to the elegant main-floor great room, while a back staircase connects to the kids’ wing of the house, which includes his two college-age daughters and the couple’s baby boy.

“[The homeowners] deserve all kinds of thanks and gratitude for tackling an old house and putting it back together,” says Cashen, who has shaped his career renovating historic homes, among other custom residential work. “They are angels for rescuing this house and putting it back in shape to last another 100 years. Old houses are never a straight line.” Now that construction is in the past, the house exudes an elegant calm. And the homeowner is enjoying every inch. “It’s such a comfortable place. We use it exactly as we intended when we were designing it. It just feels really easy to us.” 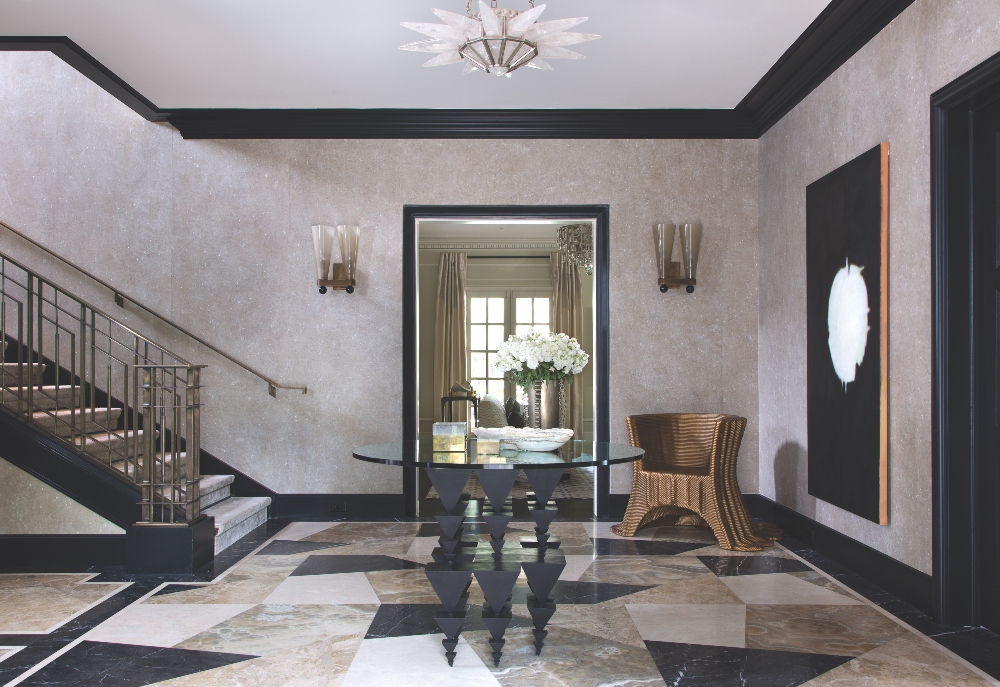 Entry A vintage table anchors the formal entryway, while a light fixture from Phoenix Gallery in New York draws the eye upward. Wall sconces are by Fabio Bergomi, and the floor was designed by Kelly Wearstler and fabricated by Percoco Marble & Tile. The corner chair is a Milukan Armchair by Christian Astuguevieille. The painting is Blue Head by Frank Shaw. 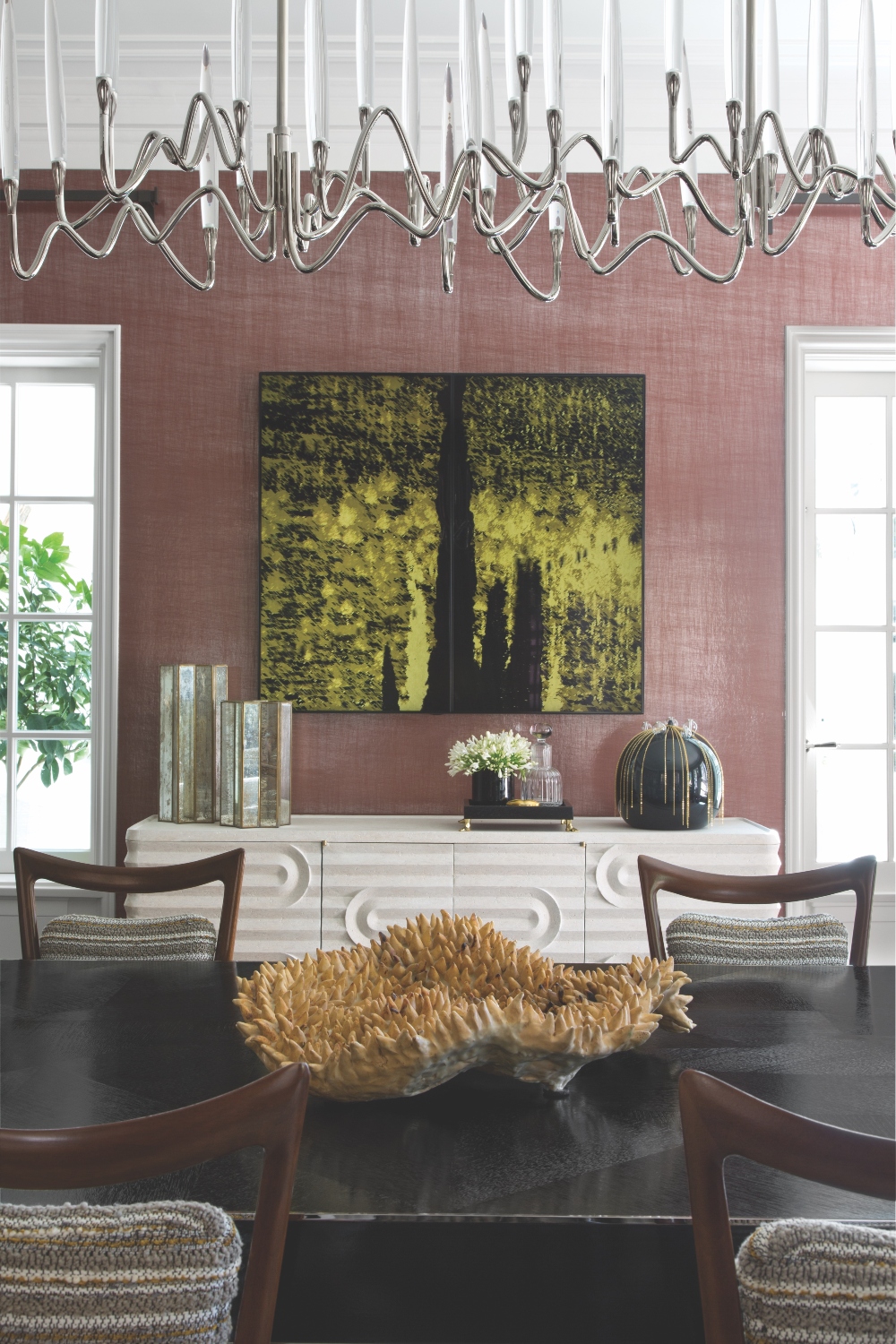 Dining Room A digital piece of artwork by Michal Rovner hangs over a Patrick Schols cabinet. A sculpture by Tania Dibbs sits on a Jean de Merry table, underneath an Il Pezzo Mancante chandelier from Keir Townsend in London. The glass object on the cabinet is a Lindsey Adelman Ambrosia Vessel. The chairs are vintage. 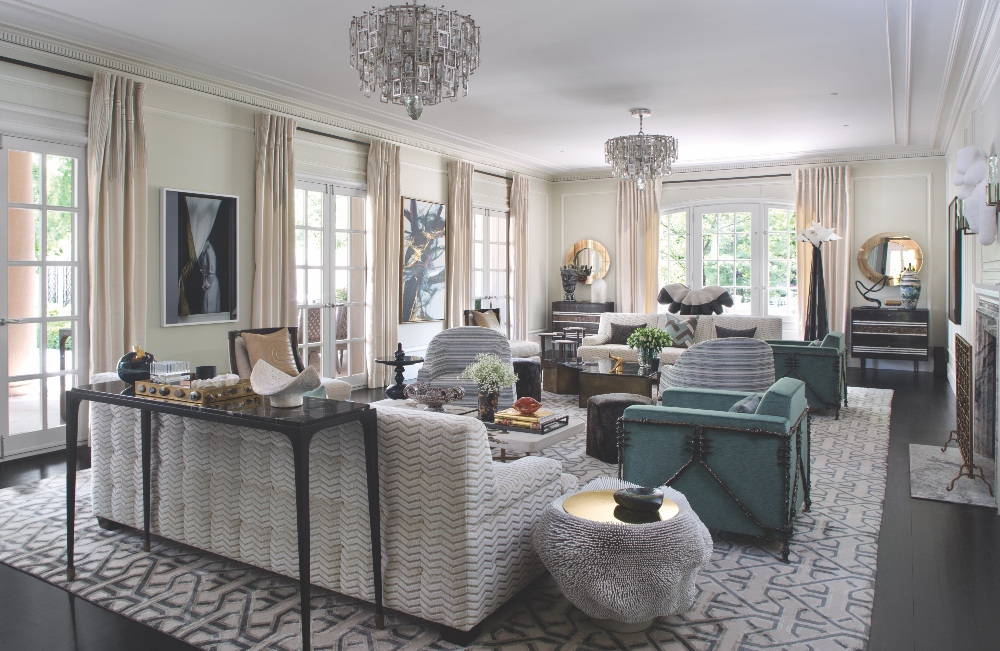 Great Room Two Jean de Merry Kara chandeliers illuminate the great room, which houses sofas by Ateliers Charles Jouffre, as well as Dmitriy & Co. striped lounge chairs, upholstered in Chapas Textiles. In the back of the room, a black-and-white sculpture by Doug Johnston from Patrick Parrish stands behind the sofa. Across the room, a Pia-Maria Raeder Sea Anemone side table rests next to a Gene Summers teal chair from Wright Now, upholstered in Claremont Velvet. The round mirrors are from Charles Burnand, and the floor lamp is by Pierre Chareau from Edition Modern. 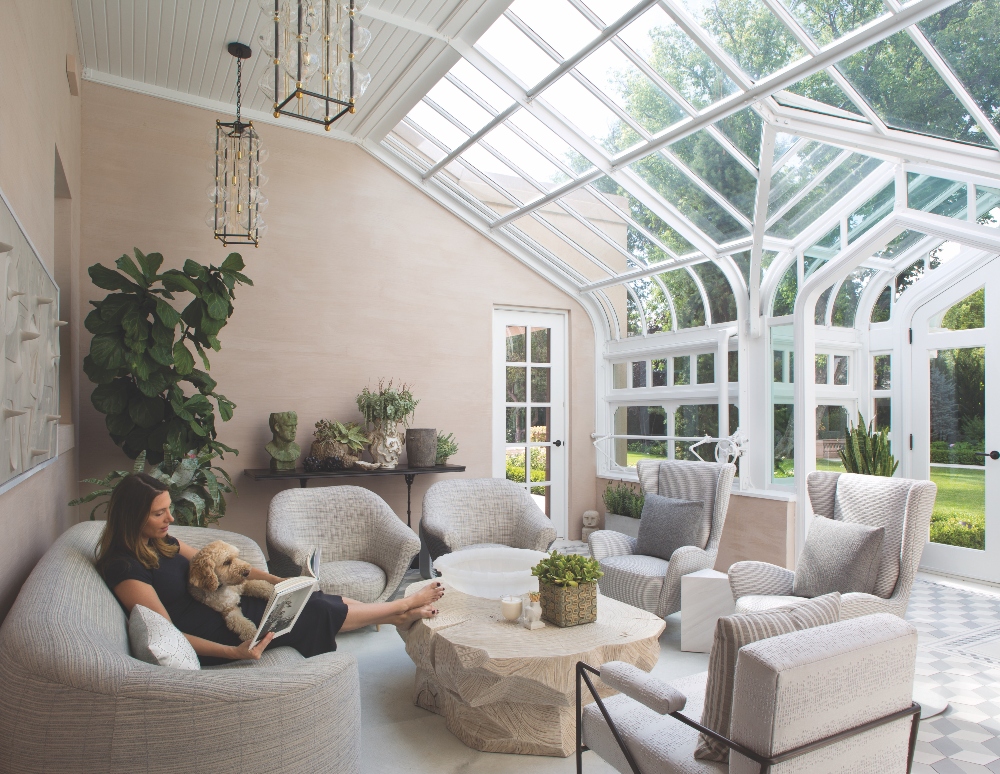 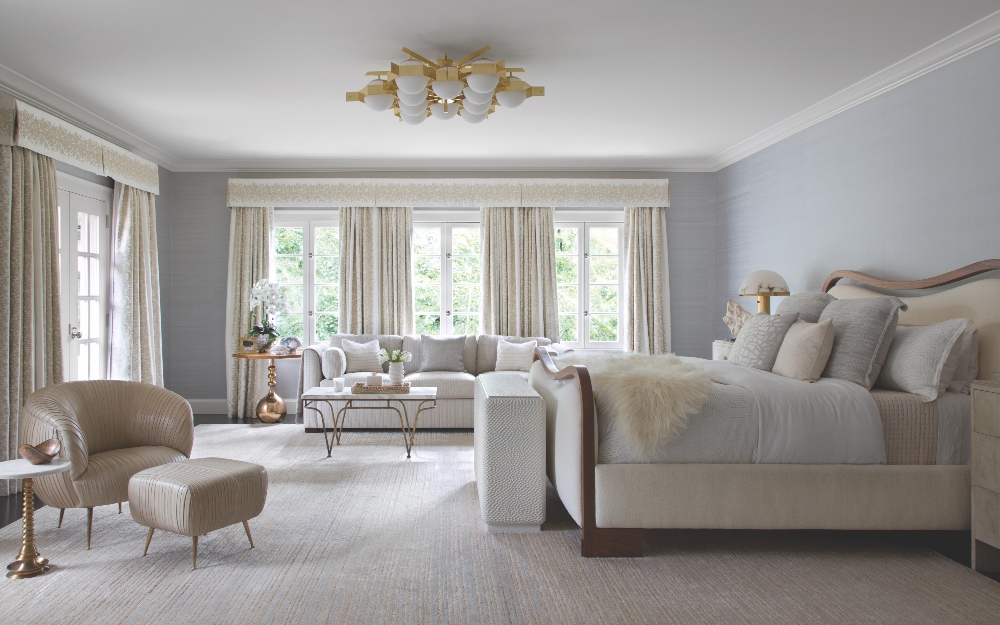 Master Bedroom The custom Kelly Wearstler bed features bedding by Wearstler and E. Braun & Co. Bedside table lamps are also by Wearstler, as are the chair and ottoman. An Amy Somerville Bauble table sits next to the sofa, and the light fixture is by Fedele Papagni for Gaspare Asaro. The rug and wallpaper are both from Holland & Sherry. 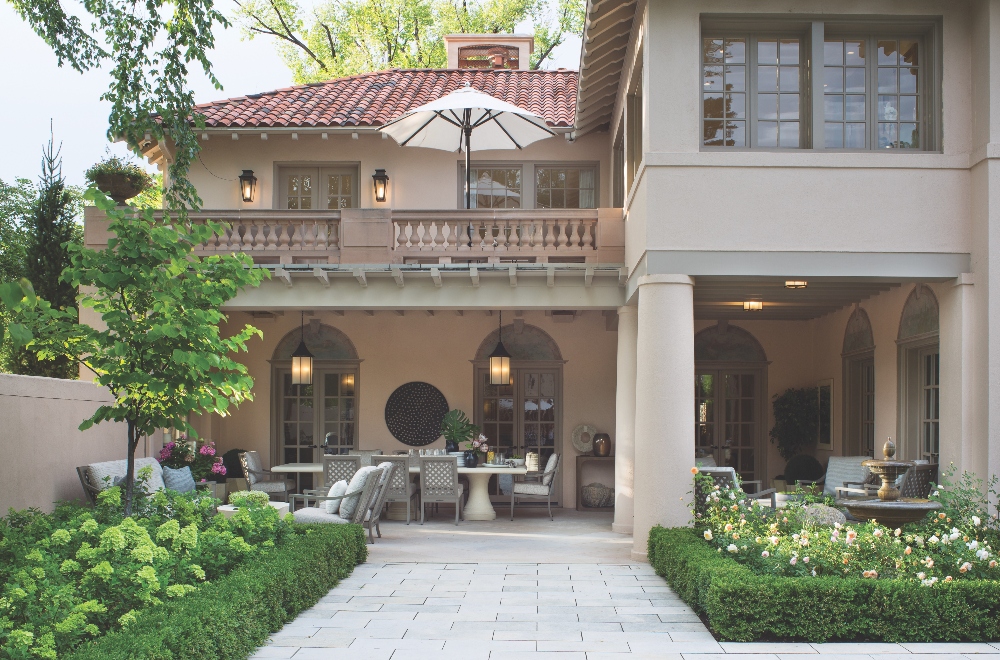 Outdoor Dining Area The seating by McKinnon and Harris is upholstered in Kelly Wearstler from Lee Jofa Outdoor fabrics. The table is from Stone Yard, Inc. The landscape architect was Paul Fields of Lambert Landscape Company in Dallas, while Designs By Sundown performed the installation. 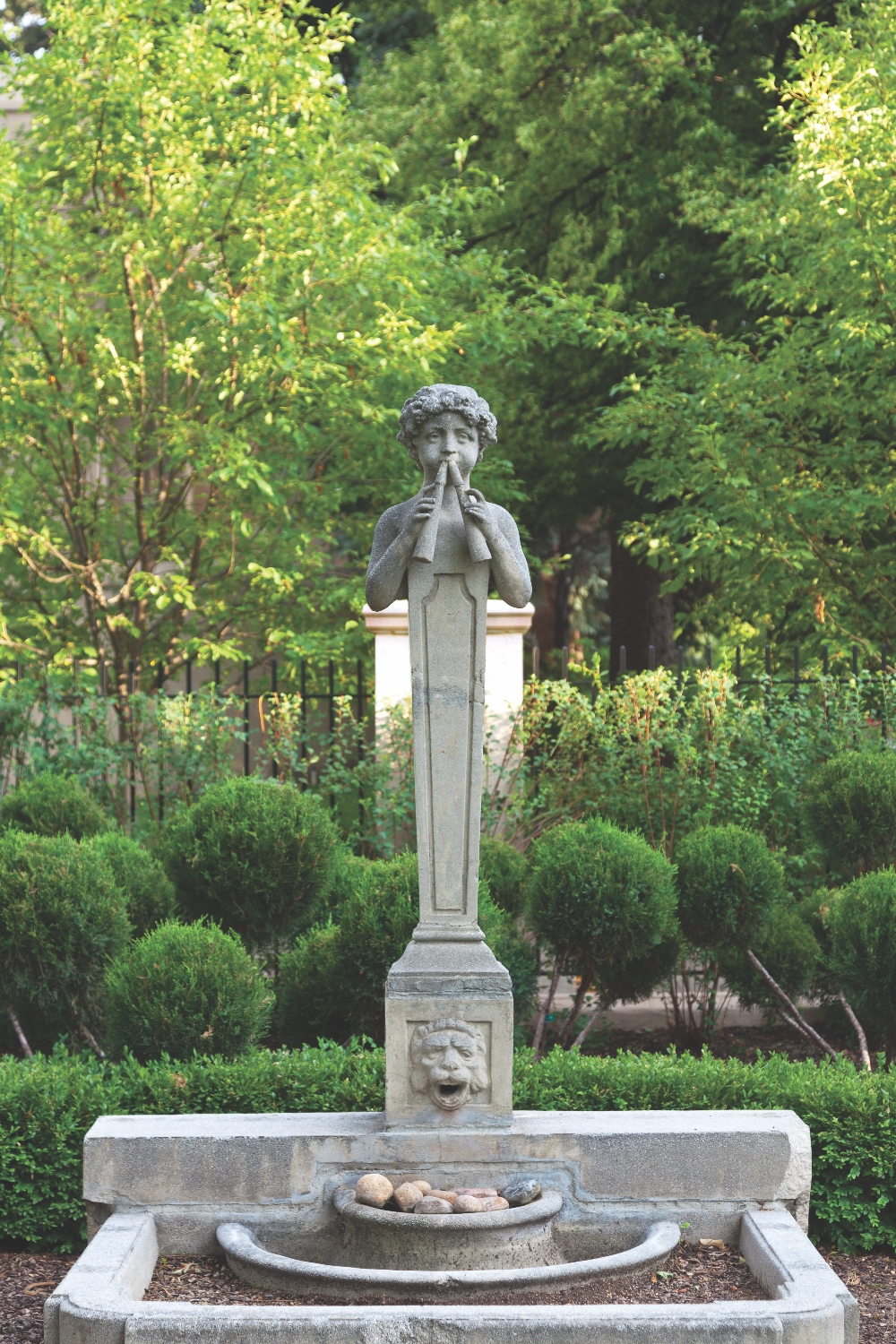 History Still Stands This fountain in the garden of a century-old home in the Denver Country Club was commissioned by the original homeowner in 1920. 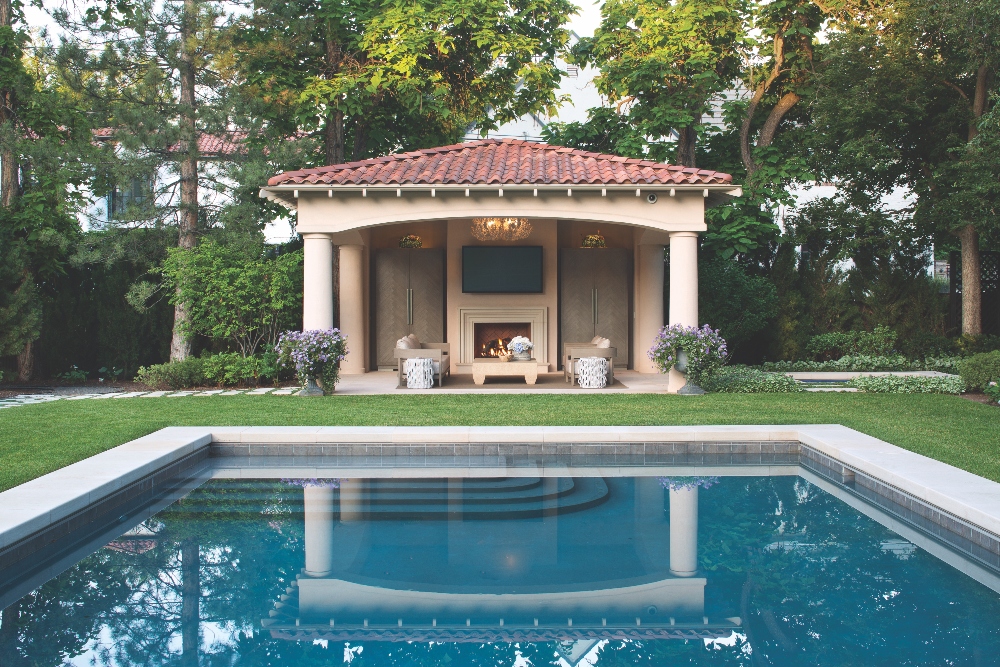 Pool House Architect Pat Cashen designed this elegant pool house. “We removed the existing pool and dug a new one in the back with a cabana, creating a focal point that attracts you to that end of the property,” architect Carlos Alvarez explains.