This Home is a Sister Act

Valerie and Gil Clausen weren’t looking so much to downsize as they were to simplify. Once their grown children had launched to far-flung places for work and postgraduate studies, Gil, a gold-mining executive, and Valerie, a violinist and the executive director of the Denver Philharmonic Orchestra, wanted a home where they could close the front door and travel, as they often do, without worrying. “Gil was interested in trying out a condo. I was excited about having beautiful views,” says Valerie. But a high-rise building was out of the question “because you only get a postage stamp outlook on your community, and we really wanted to feel connected.” They wanted to see the street below, come and go easily, and walk to a lot of places. So when they found a seventh-floor penthouse on Columbine Street, among the bustling shops and restaurants in North Cherry Creek, it had their names—if not yet their style—written all over it.

The building, by Oz Architecture in Denver, was unfinished when the Clausens bought their condo in 2016, so they acted fast and received permission for a few custom modifications to Western Development Group’s plans for the 4,500-square-foot interior. Enter Jennifer Tate, principal architect of Tate + Burns in Essex, Connecticut, and a match made in heaven—she and Valerie are sisters. Theirs is also a tried-and-true design partnership; they had worked together before on the Clausens’ previous home in Denver and, being 13 months apart, speak each other’s shorthand for the warm modernism they grew up with in their parents’ Cambridge, Massachusetts, house. “We didn’t do anything that was literally like the house we grew up in,” says Tate, "but we both understood what we meant when we went looking for something like it.”

If Valerie’s childhood home helped guide the vision, it was Gil and Valerie’s art that drove the palette and layout. The couple have been collecting paintings and sculptures everywhere they have lived, from Canada to Montana to Colorado. So before a wall was altered or a can of paint was opened, the threesome did a walk-through to determine where the art would go. The next step was to select subtle, high-quality finishes that would both complement their beloved furniture and add a contemporary warmth without upstaging the art. “We wanted the art to be the wow, and I think we achieved that, thanks to Jenny,” says Valerie.

They achieved that and more. Before the project was finished, Gil had reservations that the soaring space would feel like they were living in a public art gallery. “The results have produced the opposite,” he says. “We now have all these warm, cozy spaces and a whole new sense of being in Colorado. Instead of feeling more urban, we feel closer to nature. The light and the beautiful views that pour in are part of our every day.That has changed the whole fabric of life. We feel like we’re connected to the grandeur of the state. 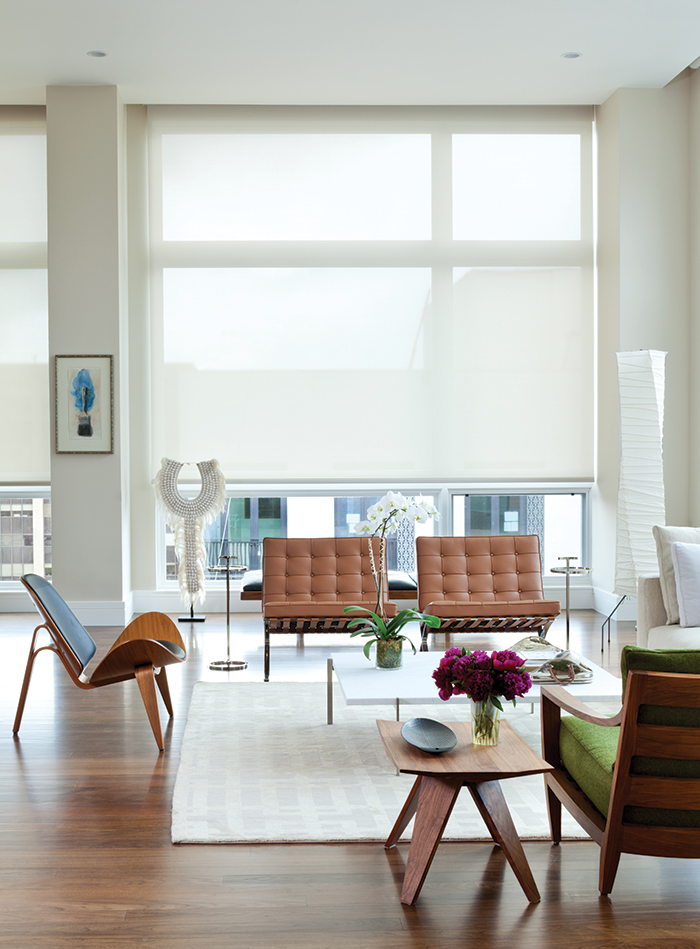 A Fritz Hansen coffee table fronts Barcelona chairs, which are flanked by a Papua New Guinea tribal necklace purchased from Bloom in Denver and a Noguchi lamp. The painting is by Valerie and Tate’s cousin, Wendy Artin, a Rome-based painter.

“The light and the beautiful views that pour in are now part of our every day. That has changed the fabric of life.” — Gil Clausen 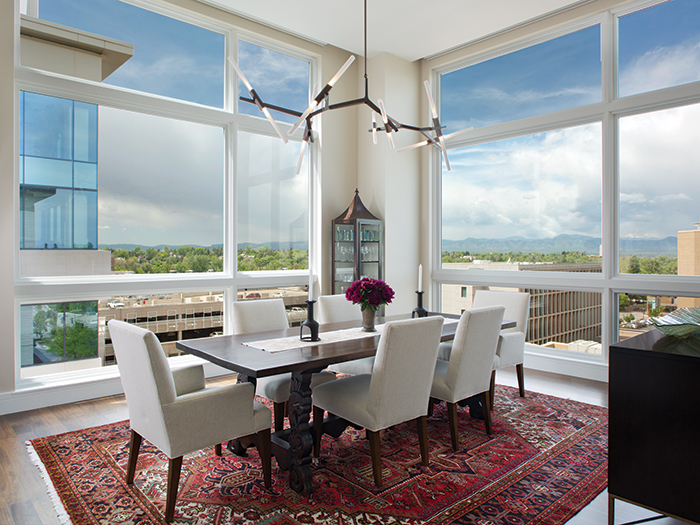 A 1969 Marquina marble M Table by Angelo Mangiarotti, along with Bassam Fellows Mantis chairs and a Louis Poulsen Patera pendant, anchor the breakfast area. NanaWall sliding window walls allow the western light to pour in. Says Valerie, “It’s great to have this flow from the inside to the outside. The patio is very protected—our begonias lived well into October!"

“We wanted the art to be the wow.” — Valerie Clausen 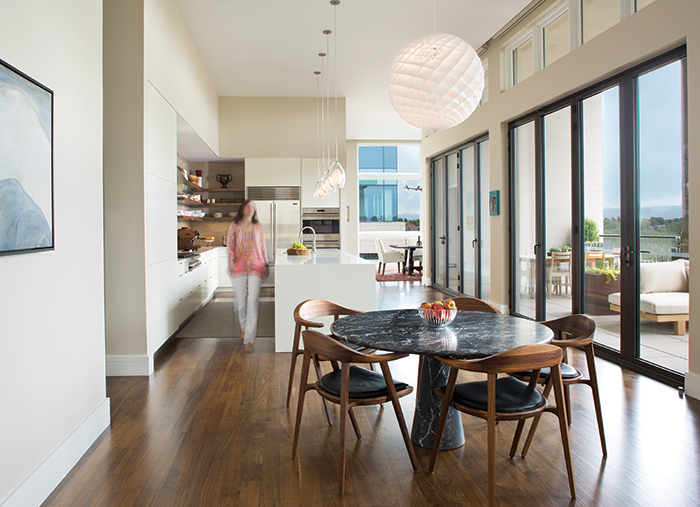 The conversational centerpiece of the view-blessed dining room is the table Valerie’s grandmother bequeathed to her. It has uncertain origins, but the sisters recall stories from their grandparents, wartime refugees from Germany, about buying it in Mexico from Ukrainians, who are famously skilled wood-carvers. The Tates’ extended family gathered around it for decades at their grandmother’s home in Princeton, New Jersey. “When I think of all the meals we’ve had around this table, and all the ones we still have ahead, I am thrilled we had the space for it,” says Valerie. The metal candlesticks, another treasure from her grandmother, rest below an Agnes chandelier from Roll & Hill.

“There were references to our past that helped inform the design direction.” — Jennifer Tate, Designer 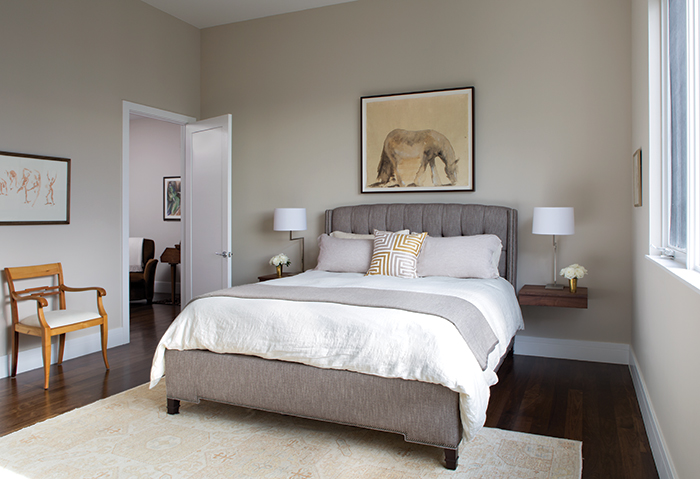 A 1930s German chair from Valerie and Tate’s grandmother has pride of place under a figure drawing by Artin. Bassam Fellows built-in side tables bookend the bed, over which presides a sumi-e ink and watercolor horse by Jane Rosen. 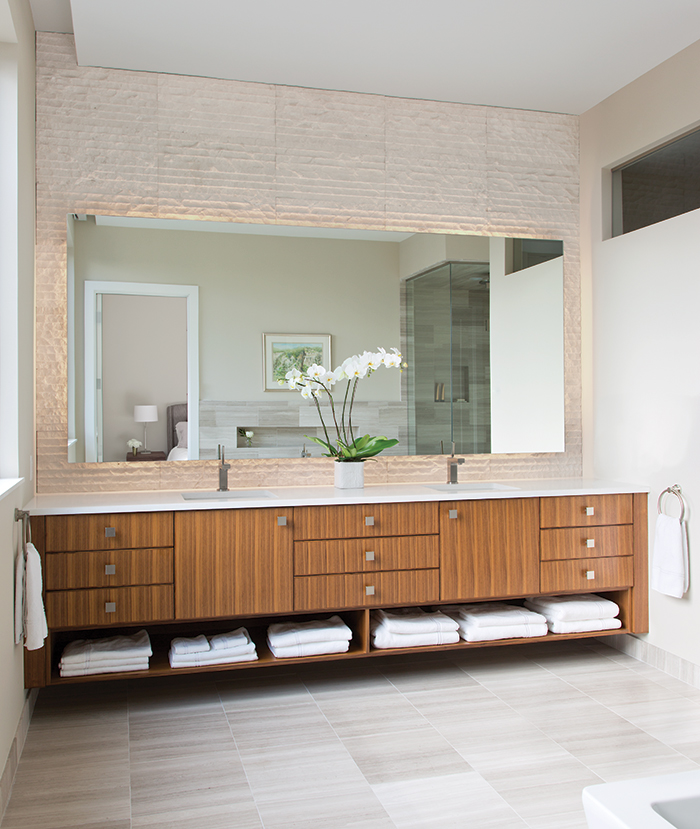 The penthouse came appointed with many fine touches—the master bathroom’s floating mirror and backlighting and Ann Sacks tile (Athens Silver Cream on the floor and chiseled tiles on the wall). But Tate’s modifications invited in more natural light and created warmth in the sparse, clean space. She custom-designed the vanity to give it a walnut façade with Manzoni drawer pulls and topped it with organic white Caesarstone. To borrow some daylight for the water closet, she cut in a high window. 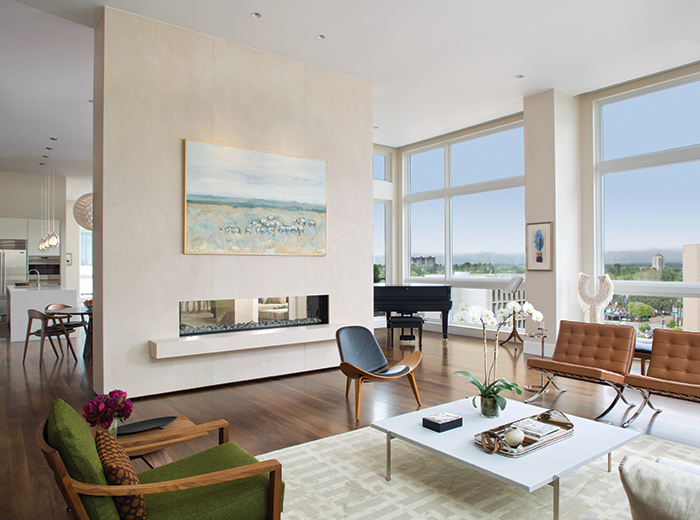 Architect Jennifer Tate suggested a stone-clad floating wall in lieu of the developer's original to-the-window drywall plan to separate the kitchen and living area. This one, clad in honed Crema Marfil Ivory marble, features paintings by Montana artist Theodore Waddell on both sides. Owners Gil and Valerie Clausen chose the see-through Ortal fireplace because it's similar to the one they had and loved in their old house. Valerie often practices her violin in the bright windowed corner by the piano because of the sweeping views and great acoustics.