The Ultimate Hangout With Views for Miles

After decades on the road, a couple sets down roots in Fort Collins and creates their forever home 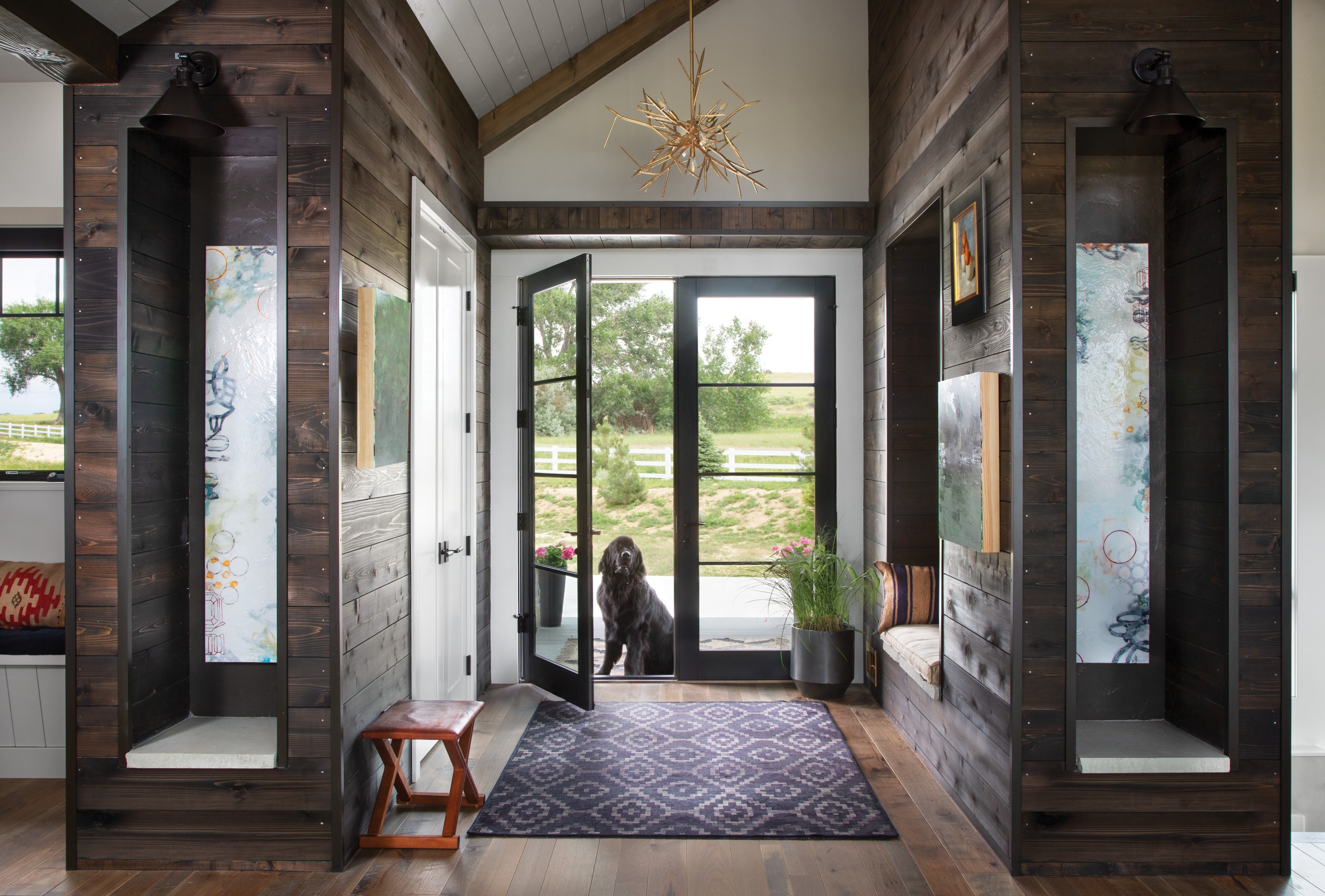 Entryway Tongue and groove pine, stained in Hill Country black, transports guests from the rustic porch to the lighter and brighter living room and kitchen spaces, says VFLA architect Taylor Meyer. A Ruggable diamond print rug provides easy care for the host of pets that both live at and visit the home. The striped pillows are from Etsy, Inset artwork by Colorado artist Julie Havel. | Photography by Emily Minton Redfield

What do you get when a former Naval officer marries a construction manager who specializes in building bridges? “Vagabonds,” says retired Petty Officer Bronwyn Chandler. That’s how she describes her lifestyle with husband Al Chandler. “We’ve lived in seven homes in less than two decades,” laughs Chandler. 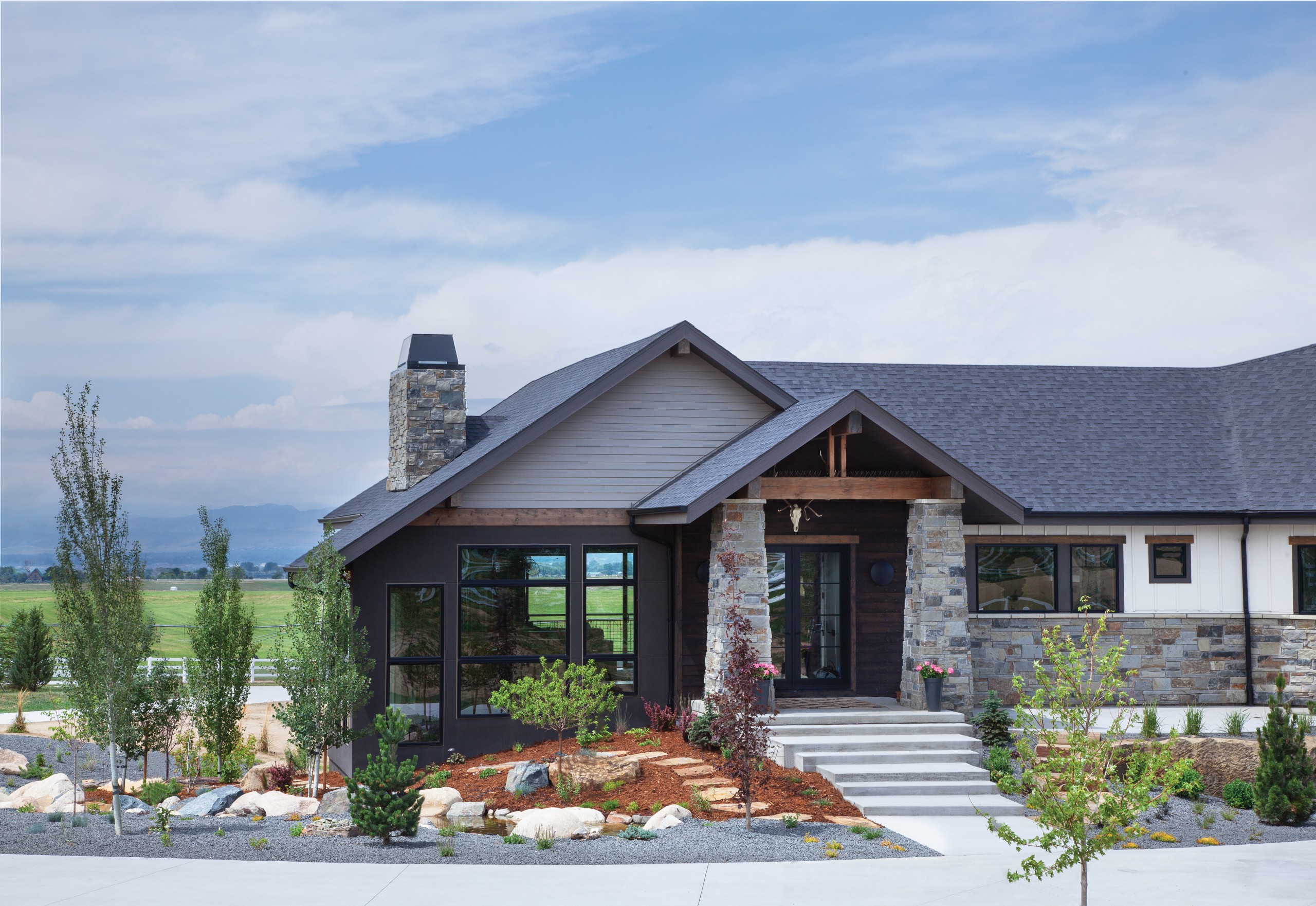 Front Exterior To design a mountain house that wasn’t too rustic, architect Taylor Meyer employed a mix of stucco, stone, and vertical and horizontal siding from locally sourced materials traditional to the area. To create the illusion of a wall of windows, he used a dark limestone stucco to match the black frame windows by Sierra Pacific. The Black Beauty limestone veneer forms the wainscoting and pillars and inspired the palette for exterior choices.

So when it came time to build their forever home, they knew exactly what they wanted and what they didn’t. “Every house that we have lived in, we’ve changed it—that’s how we came up with this house.” “Al’s specialty is building bridges, and when the bridge is done, you move on. Four years is the most time we’ve spent in one place,” says Chandler. 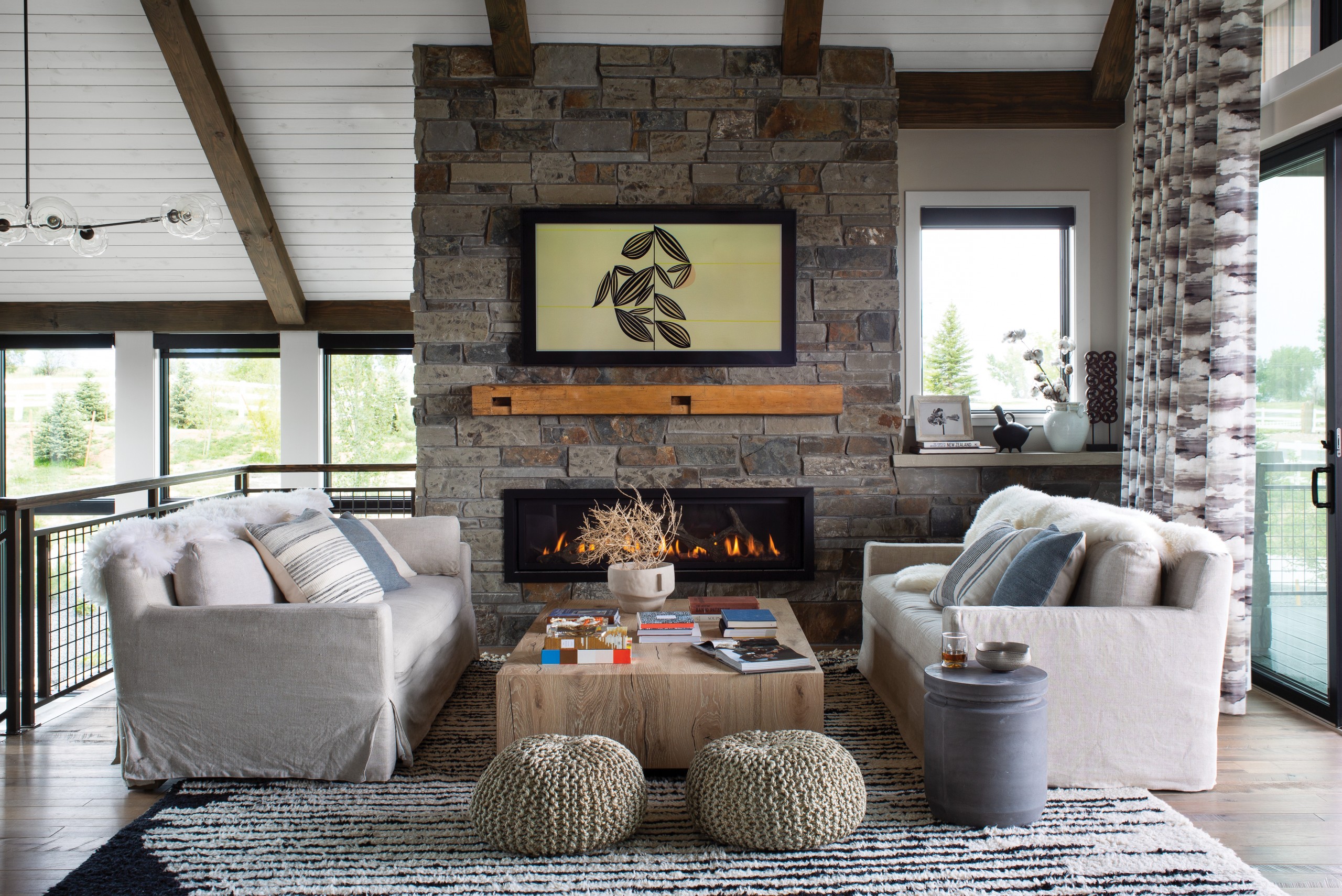 Living Room Nothing says cozy like a pair of Restoration Hardware sofas facing each other in front of a fireplace. Chandler opted against window treatments throughout most of the home, except in the living room, where she felt that Fabricut’s Cloud Nine drapery added to the coziness, as does the hand-loomed Turkish rug from Etsy. Meyer replicated exterior materials in the interior, such as the Black Beauty limestone veneer on the mantle, enhancing the cohesive feel.

Their work has taken them across America and as far away as New Zealand, where Bronwyn was raised. In 2016, they returned to the United States—Al is working on another bridge, in Colorado—and this time, they decided, they were staying put.

They found a plot in Weld County, where they wanted to put down roots, and the planning quickly began. So quickly, in fact, that the couple purchased the 60-inch Thermador Pro Grand range and Electrolux refrigerator before they had even found an architect or build team. 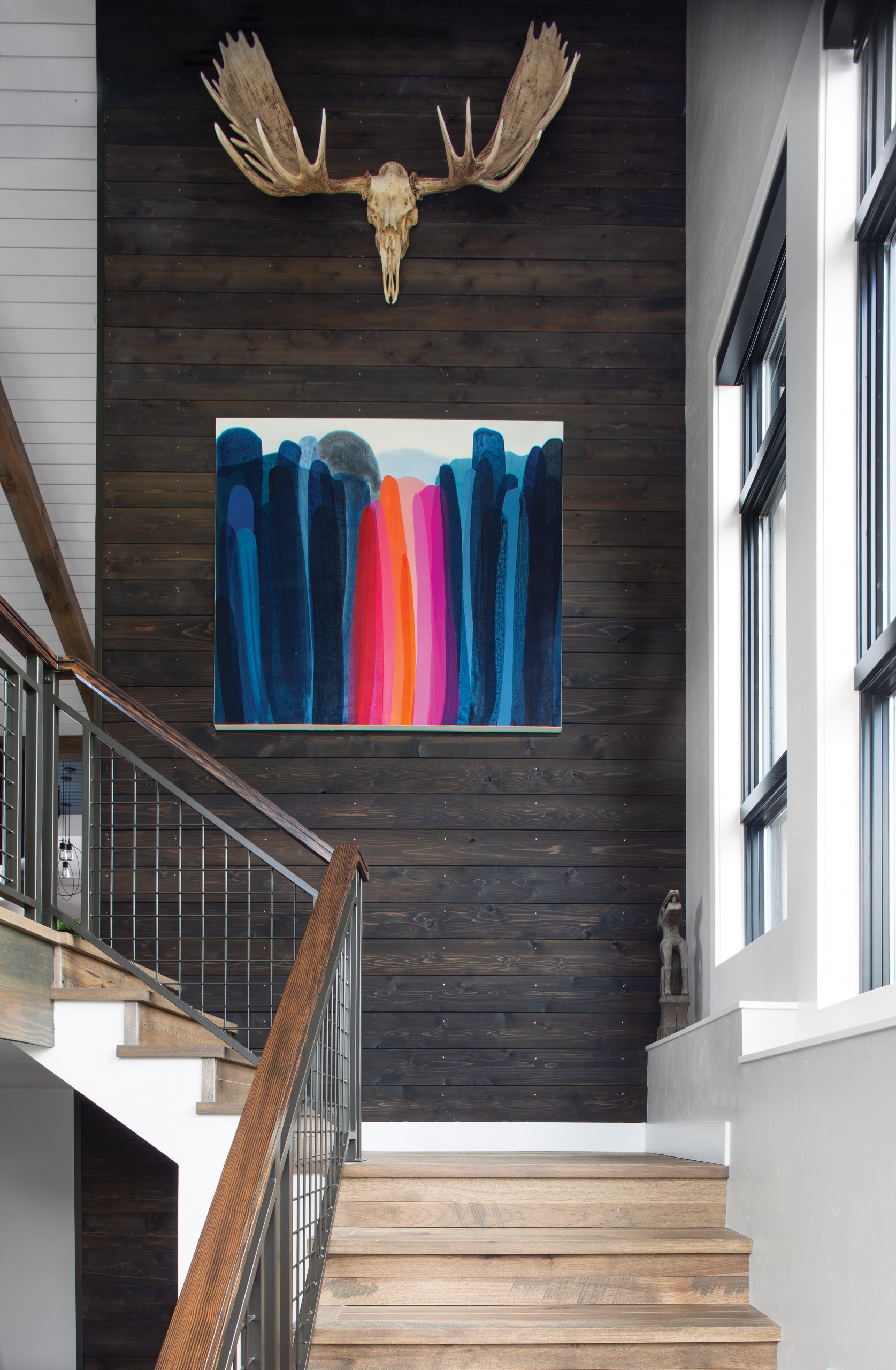 Stairway Fluent in all things DIY, Chandler aged the cast horns of the Moose Skull she purchased from Cast Horn Design. The vibrant pinks and blues of Sarah Kinn’s watercolor leap from the dark stained pine backdrop. Curated by Kate Finds Art.

Fortunately, their first visit to Fort Collins-based VFLA Architecture & Interiors was an instant match for the couple, who felt that architect Taylor Meyer and designer Stella Amedee understood the couple’s vision. “We were able to sit down with Taylor and design exactly what we wanted,” remembers Chandler. 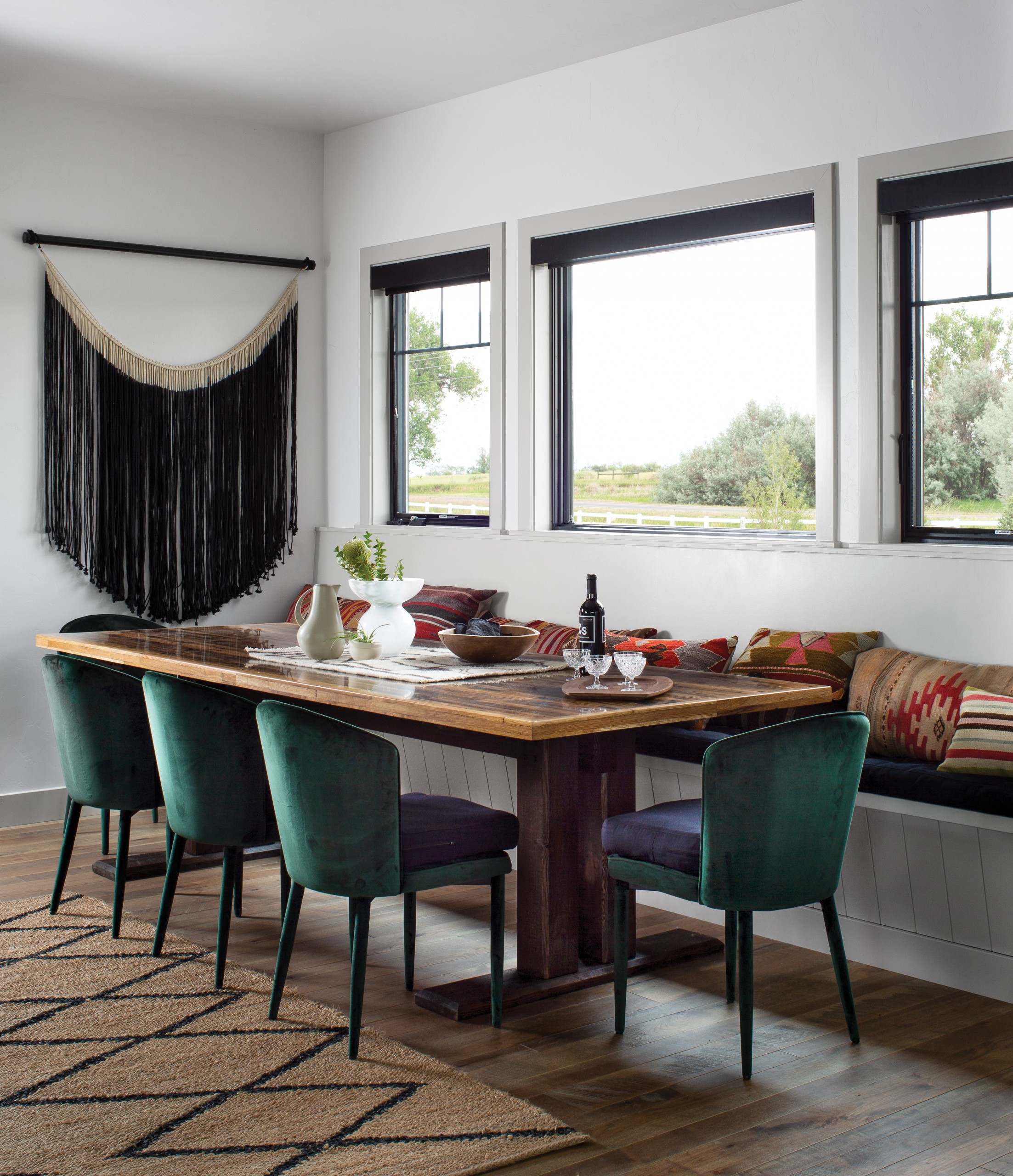 Dining Area A mix of Turkish rug pillow styles creates a casual vibe in the home. “I don’t like matchy-matchy,” explains Chandler. “I think it evokes a sense of comfort when colors are askew. It looks comfy, so I can get comfy.” Metropolitan forest green velvet dining chairs from tovfurniture.com surround a sizeable custom table. The macramé wall hanging is from Pottery Barn.

Their dream involved building a modest-sized mountain home where they could live with their three dogs, and where they could host family and friends in separate quarters. There also had to be a place for everything, says Chandler.

The home, 4,400 square feet in all, draws family and friends from all over, but no one ever feels cramped. The lower level is completely furnished and has a kitchen, so guests can remain independent and never miss out on the home’s main draw, since every room captures the view to the west.

High-traffic and pet activity drove the first interior finish selection-wide plank hickory flooring of random widths and lengths by Reclaimed Design Works. “It’s a varied material with a mix of texture and colors that sets the stage for everything else,” says Meyer. 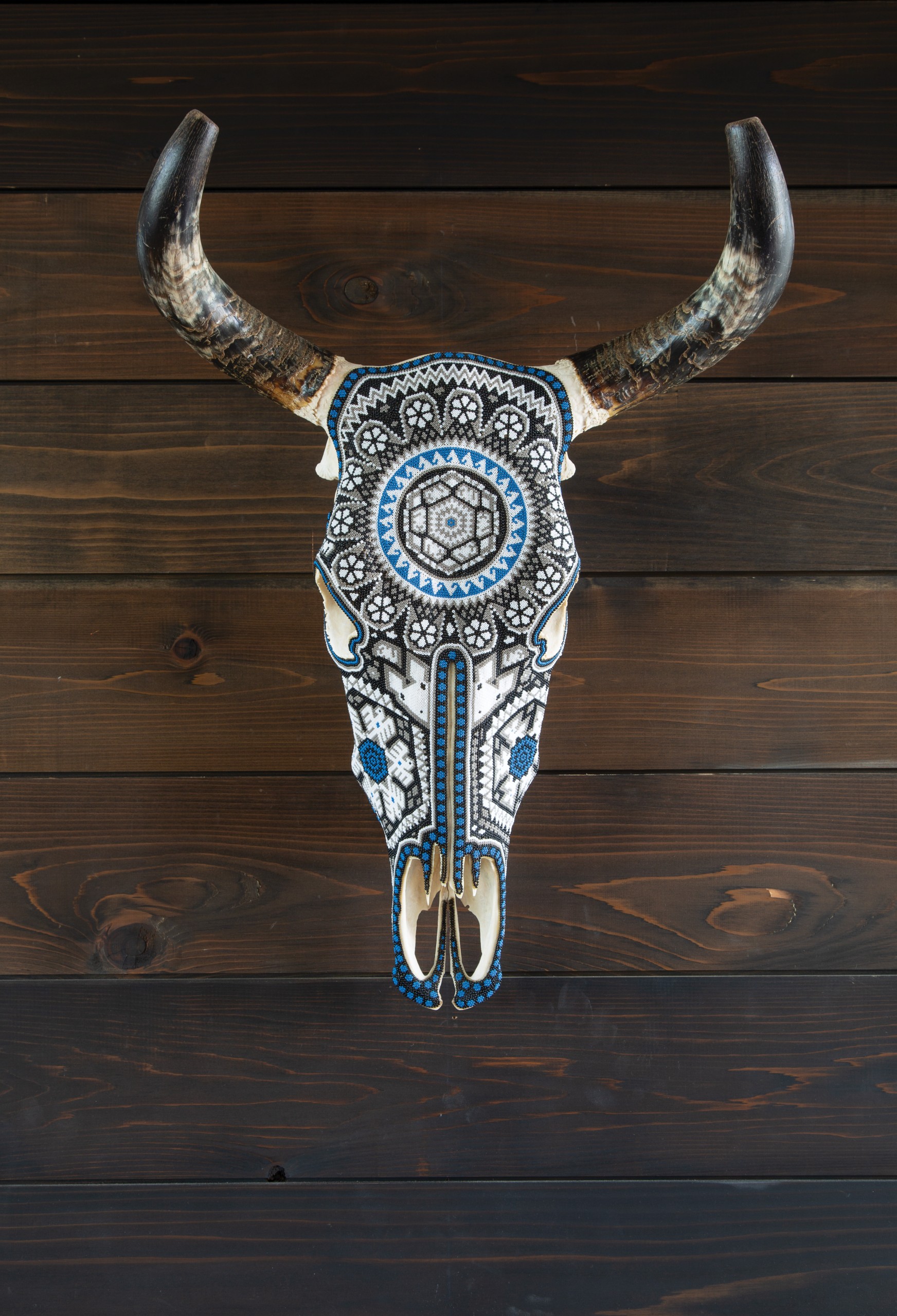 Love at First Sight While on a visit to Sayulita, Mexico, Chandler spotted a young woman working on the skull and was captivated as she “painstakingly placed each tiny bead,” says Chandler. “I was in awe and purchased it from her even before it was completed.”

Hickory, one of the hardest of hardwoods, also adds to the low-maintenance quality of the home. “These floors are unbelievable. Remy—a Newfoundland that often visits—runs back and forth, and there’s not a scratch mark in them,” says Chandler. “If there is, I can’t see them.” 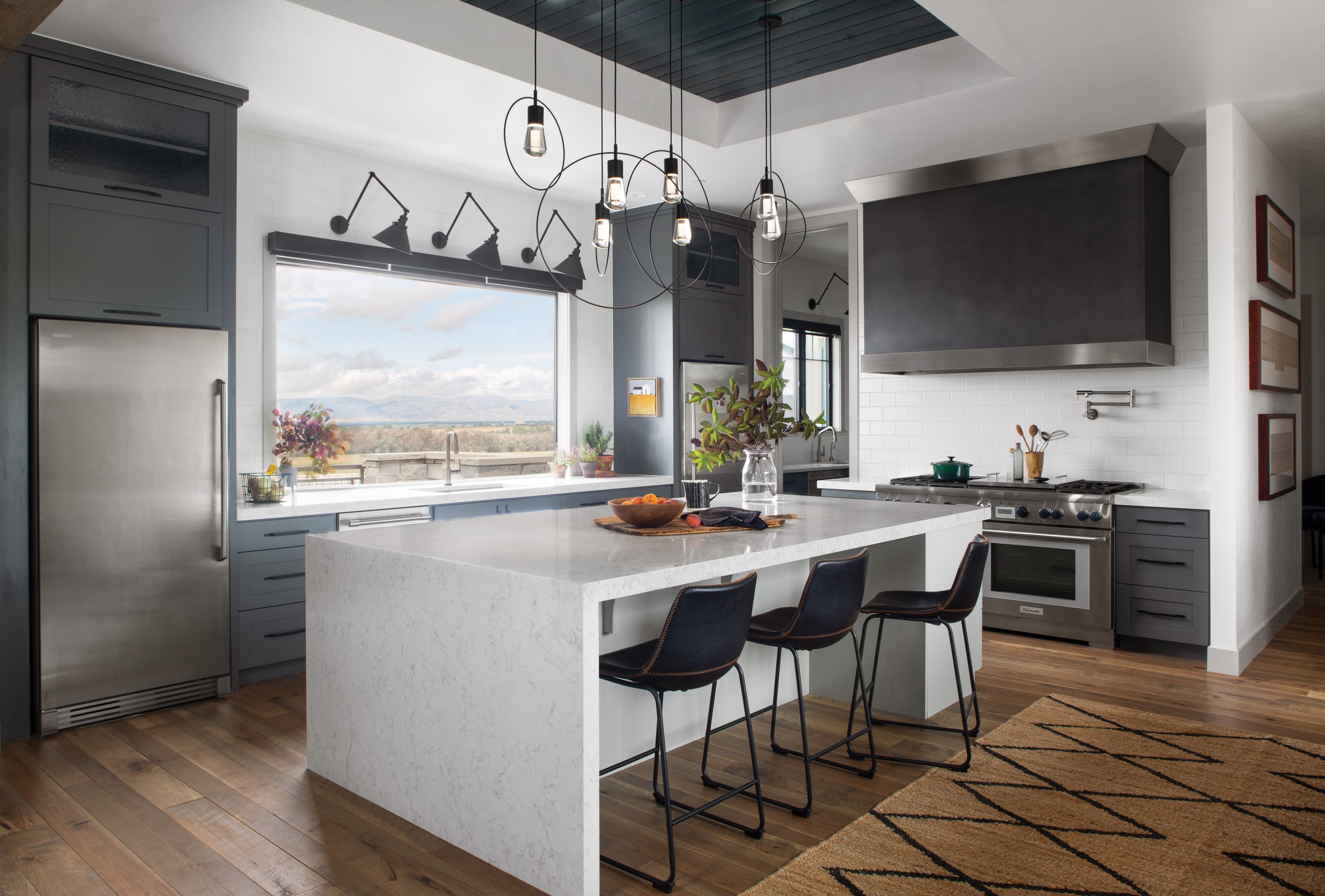 Kitchen Every decision in the kitchen design revolved around the jaw-dropping view of Long’s Peak. The Alva Pendants by Tech Lighting were intentionally placed at varying lengths above the kitchen island, and the homeowners decided against upper cabinets. Briarcliff Swing Arm sconce lights from Innovations Lighting guide the eye to the Nano pass-through window that connects to the outdoor porch. The homeowners purchased the leather stools from CB2.

Another focus for the Chandlers was the show-stopping kitchen design. “In New Zealand, there is a lot of indoor-outdoor living, and many of our friends have those big window walls,” says Chandler. “But as we started thinking about doing that here, where it’s really windy and the tumbleweeds are just flying by, I thought, when are going to have the opportunity to use a window wall?” Meyer suggested a Nano pass-through window instead, and it’s been a hit. 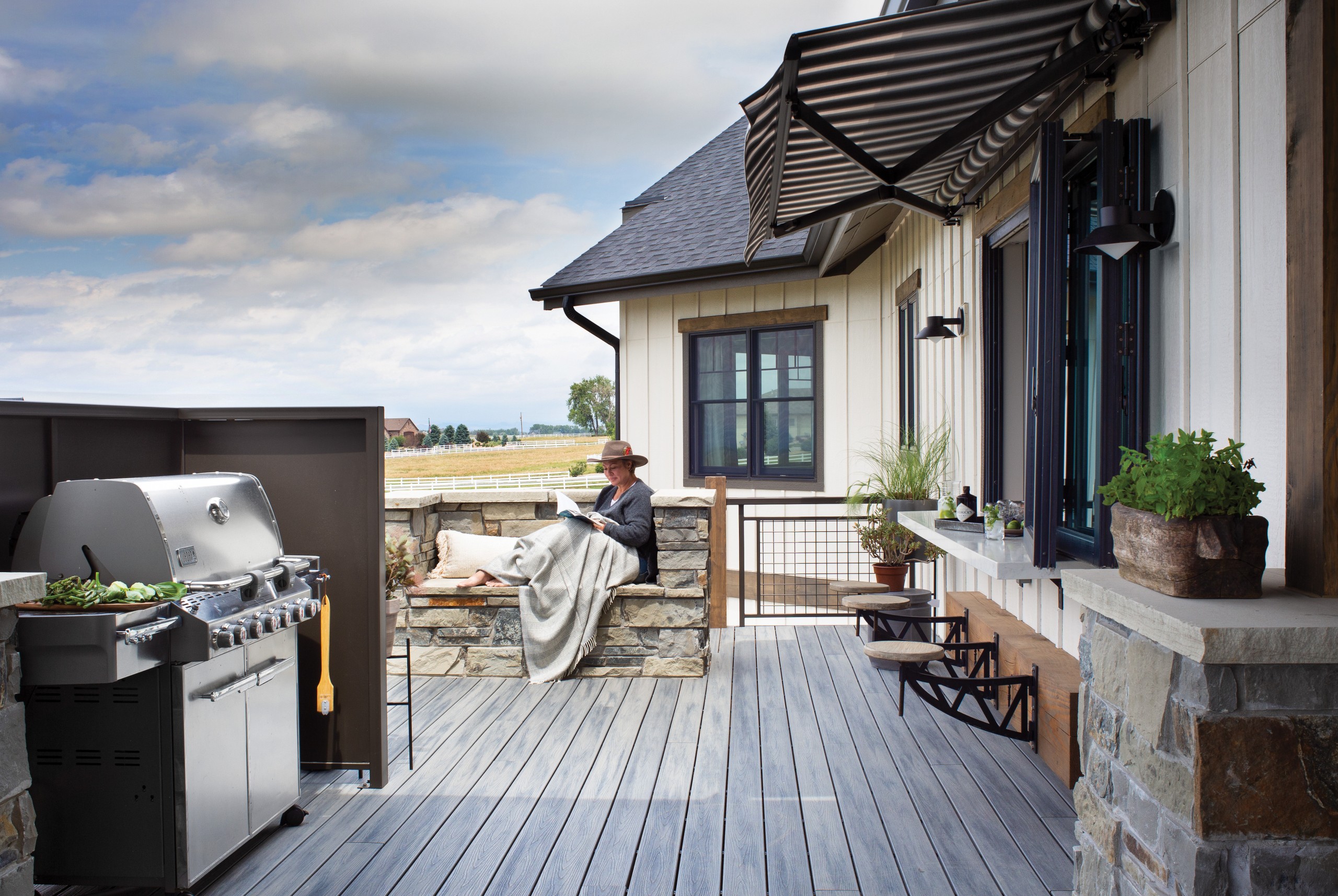 Rear Exterior A series of happy accidents shaped the patio design. The stone plinth Chandler is seated on was originally slated for the grill area but was the wrong size. Instead, the metal worker drafted the design for the metal screen, which is not only more protective but conceals the grill from view. Bronwyn ordered the attachable swing-out stools from Wildwood Custom Woodwork on Etsy before the counter was placed. During the install, they realized the stools would be under the counter, so added a large timber to which they could attach the stools, and that timber now provides a place where guests can rest their feet

Chandler says the design of not just the kitchen but the whole house helps the couple accommodate any size crowd. The Chandlers are so happy with their home, they’re glad to entertain. “I’m kind of surprised how easy it is to go from just Al and I to 30 or 40 people milling about,” Chandler says. “There’s plenty of space for everyone.”