The Architect & The Cowboy

They built themselves a perfect-for-two home, then added our favorite guesthouse—ever

If there were a contest, Karen and Jon Sund would be voted Least Likely to Glamp. Glamping—defined by the Oxford English Dictionary as “a form of camping involving accommodations and facilities more luxurious than those associated with traditional camping”—doesn’t really feel like a fit for a couple who spend late summer through late fall happily living the exact opposite of glam. During hunting season, the two reside in a tiny camper on a remote base camp on the edge of Gunnison National Forest. Come November, though, they load up their 32 horses and relocate to this place on the outskirts of Westcliffe, an architecturally polished and perfect small home that boasts more square footage outside than in and a guesthouse to beat all guesthouses.

Karen designed the whole shebang; she’s an architect who trained in Nebraska then worked in Georgia, where she fell in love with the elegance and hospitality of Southern style. Jon, owner of Eagle Mountain Outfitters, is a cowboy jack-of-all-trades who has spent his life working with horses; he helped build the place. The couple share a love of Colorado, wilderness, horses and good company, as well as a can-do attitude that allowed them to design, construct, and finish their home and guesthouse in less time than it takes most of us to pick out a new sofa.

“I wanted our house to have that modern Louisiana style meets rustic Western touch to it.” — Karen Sund, Homeowner and Architect

The Westcliffe spot came together in about six months, says Jon. He took charge of the plumbing and power (the place is 100 percent solar). “I’ve done a bit of it before, and it’s all pretty simple,” he says. “And it’s good that we have nice inspectors because they’ll come out and have you cut stuff out and redo it, and kind of tell you how to proceed. There’s nothing that can’t be fixed.” 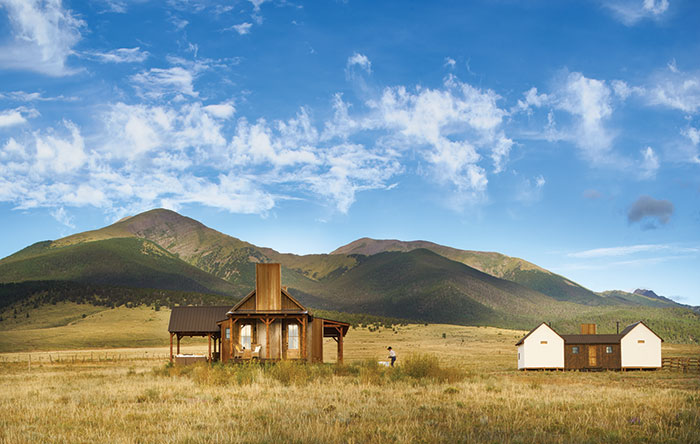 When the first builder the Sunds hired didn’t work out, they found their match in similarly imperturbable carpenter Edward Borntreger. “I’ve never built anything like that tent structure before,” Borntreger recalls. “But if it’s in the line of wood, I can always figure something out.”

Karen is a fan of small living—“I think you can make amazing spaces with half the square footage and they can still feel twice the size,” she says—so the main house is a tidy 690 square feet, with generous porches providing outdoor living and dining space for the overflow of family and friends who visit through the spring and summer.

The unique glamping guesthouse for all those visitors was actually an afterthought. “When we told our families we were moving from our one-bedroom place and building a new place, they asked, ‘Will this one have guest bedrooms?’ And I said, ‘Well, no.’ ” Karen says that at first she and Jon were thinking that guests could “just bring tents and campers” and set them up on the rolling 85-acre lot. But their Southern/Western hospitality kicked in. “Jon, who uses wall tents to house all the hunters, said, ‘Let’s just stick ’em in a wall tent,’ ” says Karen. “And I thought, ‘Great idea! But let’s build some platforms to slap those wall tents on so they have a nice floor. And then it just evolved.”

“Sometimes Karen has a vision,” Jon laughs, “and I don’t.”

“The thing I love the most is the guests have their own space and we have ours. We like to get up really early in the morning so we can go sit on the porch, have a cup of coffee and watch the sun rise. Guests usually get up later, but if they want to hang out into the night, they can lounge around their fireplace, be as loud as they want, while we’re over here tucked in our bed. It’s perfect for everyone. It’s my favorite part of how the place all worked out.” 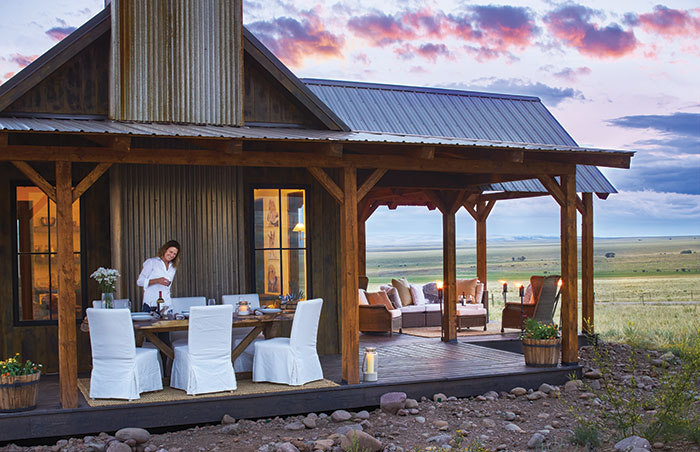 “I’m a huge porch fan,” says Karen. “I got that from my time in the South. And I realized that when the guests are here in summer, they want to eat outside, so we didn’t need to make a huge dining space in the house. I could just move it out to the porch.” 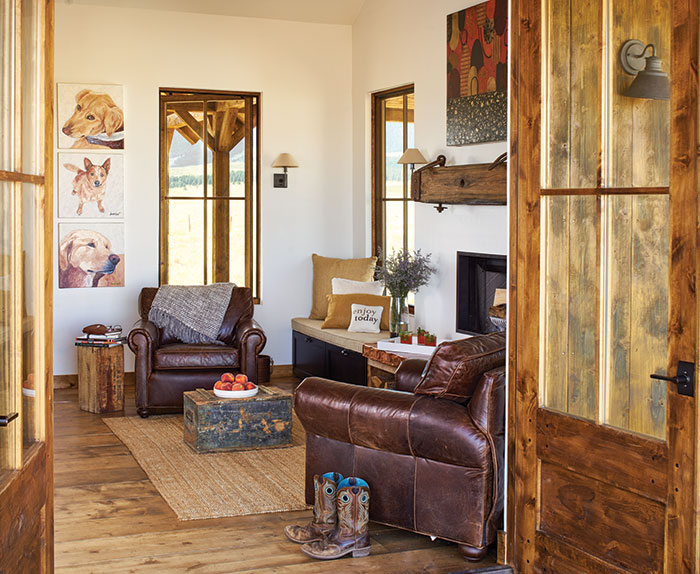 The pet portraits in the living room were a wedding gift from Karen’s friend, architect Beatriz Arbat. “She’s incredible. They are the spitting image of our dogs,” says Karen. “Two of the dogs have passed away now, and they were so near and dear to us. Thanks to Beatriz, we’ll have them forever.” Above the mantel is Dreaming of Madrid by Don Quade from Walker Fine Art. 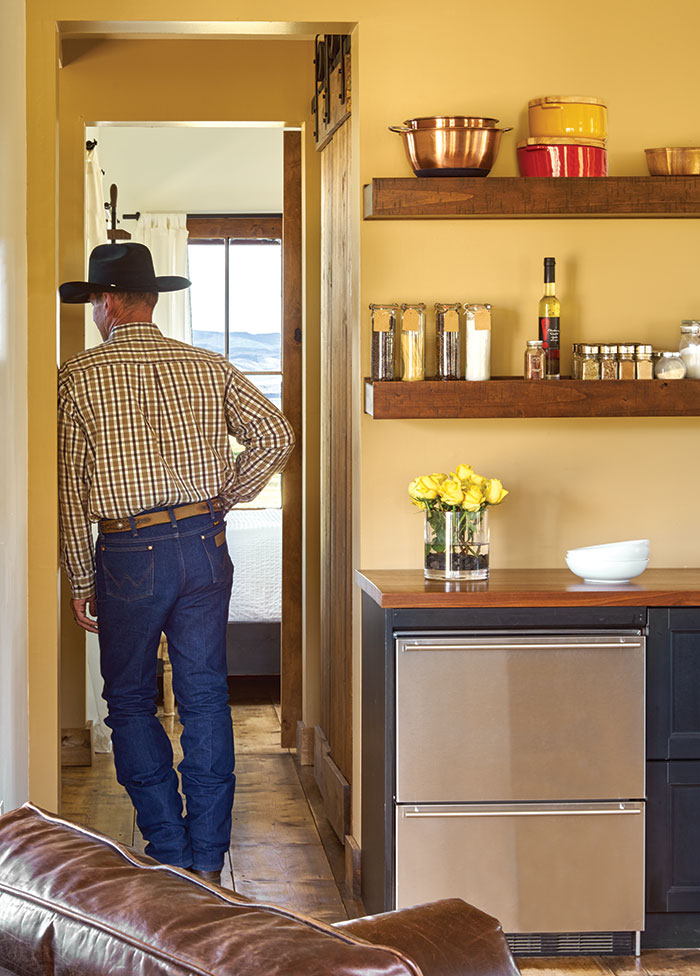 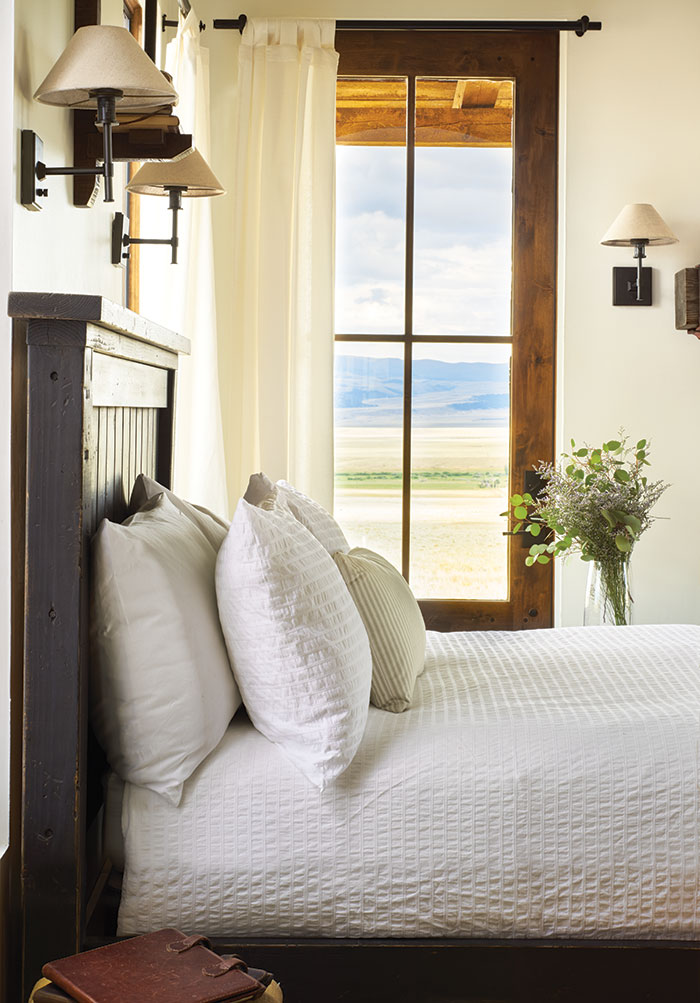 The bedroom is on the east side of the house, and the long French doors open onto a private porch. "The bedroom is one of my favorite parts of our home. We see some incredible sunrises from there,” says Karen. 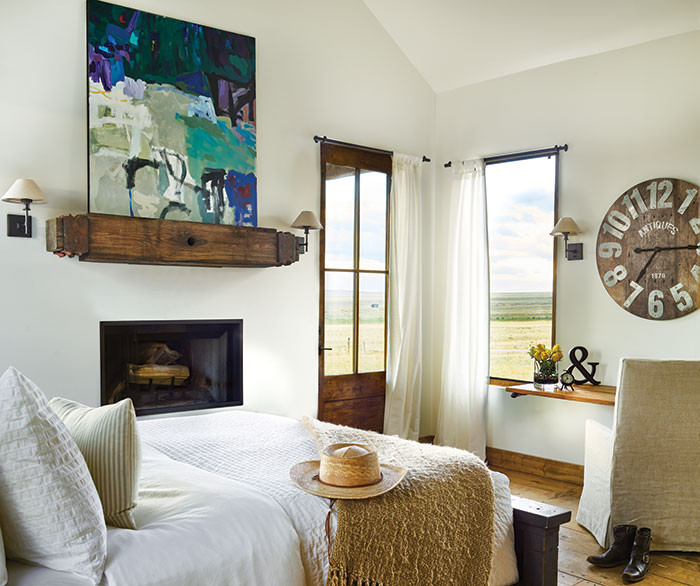 Karen initially wanted reclaimed timber for the mantels, but Jon balked at the price tag. While at a horse sale in Iowa, he found an old Amish logging sled for $200. They used the rear axle for the mantel in the bedroom, and the front axle for the one in the living room. “I couldn’t envision anything more perfect,” says Karen. “He’s a budding architect and doesn’t even know it.” On the mantel is Enchanter by artist Ben Strawn, from Walker Fine Art. 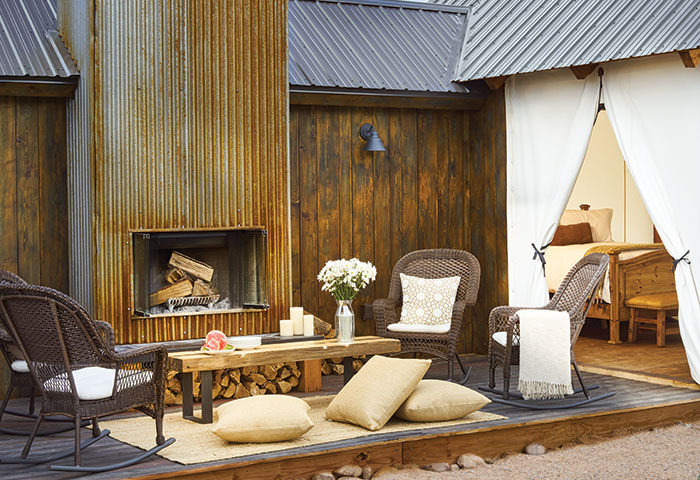 Karen used corrugated steel siding that’s meant to rust on the house chimney and on the glamping outdoor chimney. “I wanted a warm, antique look,” she says. “And originally I wanted to use old barnwood for the exterior, but it was just too expensive. I picked a stain, but the stain looked horrible on the wood we used. Then Chris [painter Chris LeCuyer] said, ‘We can work with this—I can make it look like reclaimed wood.’ It was a four-step process, and next thing you knew, I had this gorgeous ‘reclaimed barnwood’ that I didn’t pay anywhere near as much money for.” The white bedding and rustic bed frame coordinate with the timber tent supports and white canvas walls. With outlets, lights with switches, and a full private bath in each tent, says Karen, “it’s pretty far on the luxurious side of camping."

“I thought, let’s build a permanent tent frame rather than use those metal ones, and let’s make a shared deck and a fireplace on that, and let’s give ’em a couple of bathrooms. And it evolved into this incredible glamping structure that family and friends are crazy about.” — Karen Sund, Homeowner

At dusk, the canvas-walled tents, illuminated from the inside, look like paper lanterns set out on the prairie. “I did not know they would look that good at night!” says Karen.

SEE ALSO:
A Girl, A Blog, A Barn
A Guest House Overflowing With Style
A Back-Road Masterpiece in Horse Country
An Equestrian's Dream Home in the Front RangeSaveSaveSaveSave