Step Into the Studio of Ana Maria Hernando

Curt Pesmen,
Step into the Boulder studio of Ana Maria Hernando, and your eyes don’t know where to turn first. On one wall, affixed to a gesso-white expanse reached by ladder, a massive pastiche of pastel floral designs beckons, waiting only for what appears to be minor final accompaniment. On the tall wall opposite, a gleaming, dark collection of luminescent oil paintings-in-process huddle together, closer to the natural light. These shapes inspired by nature are arranged tightly, painted opaquely, as the artist contemplates the next layers of sheen. Of their blackness amid all the bright, Hernando says she has asked herself time and again, “What happens in the color of the night?”

And decorating the far wall is a passel of elegant imported fabrics, plus pancaked stacks of bright silken circles and round woven patterns that await their fate as cameos in one of her next arresting installations.

It is, to an outsider, a lot to take in. But to Hernando, not so much. Born in 1959 and raised in Buenos Aires, she studied as a young artist at Escuela Nacional de Bellas Artes and went on to the School of the Museum of Fine Art in Boston and the California College of Arts in Oakland, California. She descends from a line of creative women who passed down a love of beautiful patterns in nature that have stoked in Ana Maria a desire to move masterfully beyond the expected when it comes to creating art. Of all types. 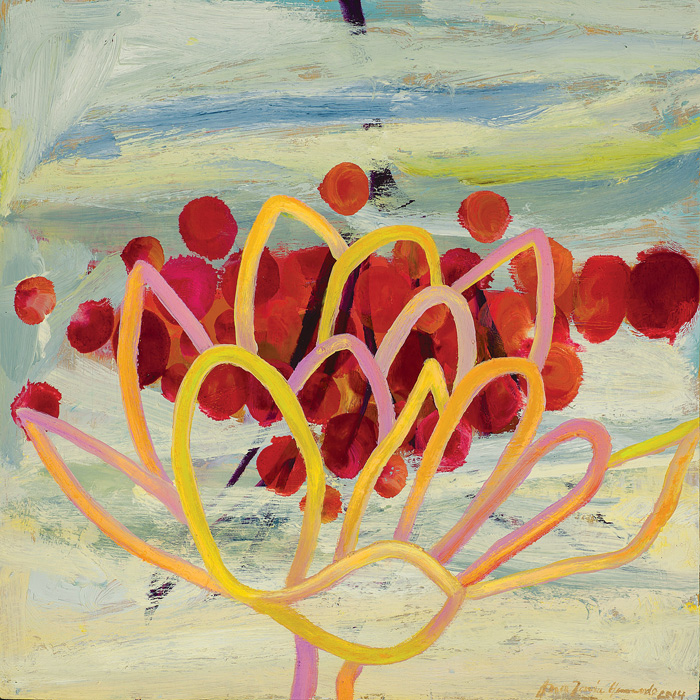 “I have painted since I was 5 years old,” Hernando says. “I was a painter when I began to work with an order of nuns in Argentina—when my pieces, without me even realizing it, started to become installations. As a teenager in summers I would go to work in my family’s textile factory. And I would draw. But I moved to Berkeley not to be an artist but because I fell in love. 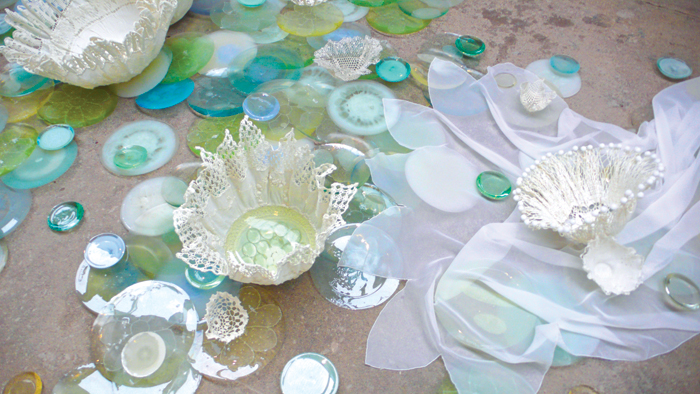 “I am very sensitive to light; I love the light here. I love that there is so much sun here—it is also in my emotional space,” she adds, speaking of what has been her home since 1986. “Colorado has been really kind to me.”

So has her homeland, apparently. For it is clear that her mixed media contains storied elements of both South and North America. Over the past decade, Hernando has found an unlikely but spiritually driven collaborator for her larger works and installations: a monastery of Cloistered Carmelite Sisters from Buenos Aires, from whom she buys original fabrics and whom she hires to cut and sew designs from patterns she carefully constructs. 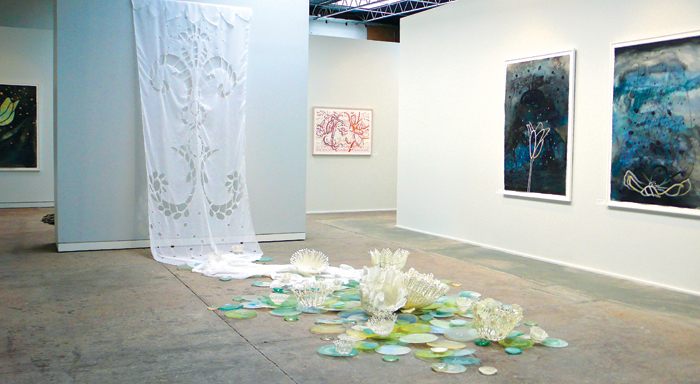 “At first I was not allowed to see my partners (the nuns), as they were only allowed to talk to me from behind a screened wall,” Hernando relates. Consider: An artist who has jetted in from Colorado, a mother of three artistic children, describing vast works of art-to-be to women she cannot see, to sisters from an ancient order with whom she hopes to work, on projects slated to be at once intricate and intimate?

She makes it work. So too, the sistren. As for her new installation pieces, Hernando remains keenly interested “in the poetics of the collaborative nature of women in different cultures.” 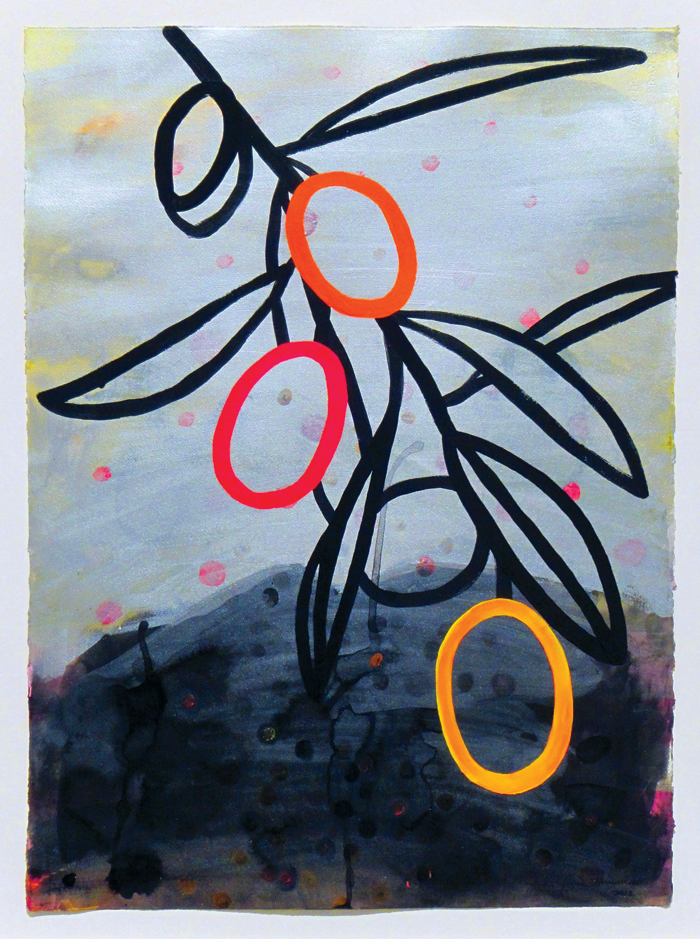 Following solo exhibitions at contemporary museums in Duluth, Minn. and Boulder in 2005, she had a solo show at the Kemper Museum in Kansas City, Mo., in 2010. In 2009, she created an installation, “La Montaña,” from hand-crocheted  Peruvian petticoats for a solo show at Denver’s Museum of Contemporary Art  (MCA). 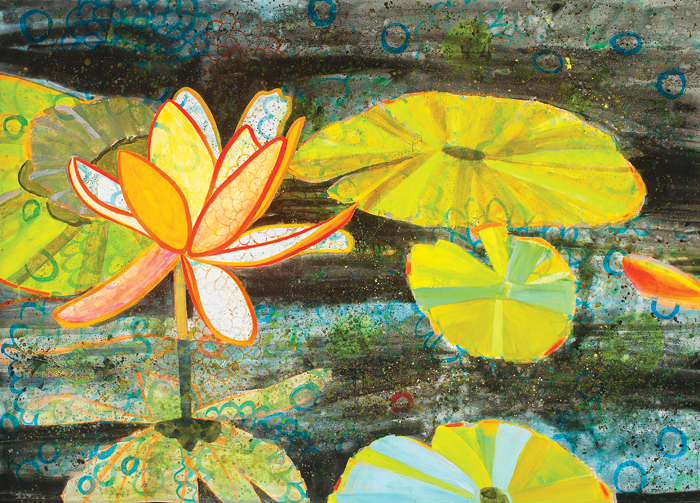 “Ana’s work is poetic and magical. And who doesn’t want to believe in magic?” says Karl Kister, former board president of MCA Denver.

Hernando staged a solo traveling exhibition at contemporary  museums in Oklahoma City and Marfa, Tex. in 2014. This year she is preparing for a  2016 solo show at the University of Colorado Art Museum. 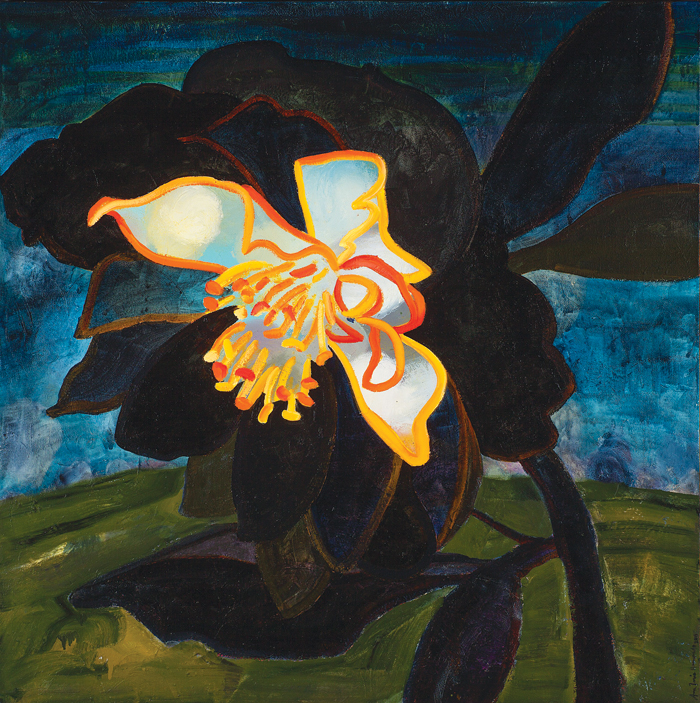 Yet whether paintings, sculptures of nature, or installations predominate in her shows there is one constant fairly bursting forth: the art of the flower.

“For me flowers are beauty,” she says. “They are desire; they are fire; they are time; they are sex. It gives me pleasure to move the brush following their shapes.”

Her works speak a language that harks back at least two generations to the intricate designs of mantones and mantillas, traditional garb Ana Maria found herself transfixed by in childhood and still today. Flowers, blossoming shapes, and sensual fabrics, evolving into a figurative language all their own.

“I drink from many places, though I really am South American in my colors. It just happens.”