The first thing guests see upon arrival at David Jacobs and Jean Conway Jacobs’ north Boulder home is an iron gate with an imposing black widow spider embedded in it. The symbolism is not lost on those who know Jacobs, founder and former owner of Spyder Active Sports, an upscale line of racing and recreational ski apparel. The black widow is the company’s logo, inspired by the contours of the padding on its original 1970s racing pants, which resembled a spider. “I’m a brand junkie,” Jacobs says, “and I realized that the edgy elegance of a black widow was unforgettable.”

Of course people who know Jacobs well also know he’s afraid of spiders. But a logo’s ­a logo. And where better to put it than on the gates to his five-acre spread where he and his wife, a communications consultant and psychotherapist, built a new custom home.

“We bought the land in 2005,” says Jacobs—the year after he sold the successful business he’d started in 1978. At the time, they lived across the street from what had been ranch land. When the owners of the ranch decided to subdivide the property, the couple jumped at the chance to buy a five-acre parcel.

Though they’d never built a house before, they knew what they wanted: a home that maximized the views, a dining room that accommodated large family gatherings, and a show garage for the six vintage race cars Jacobs takes to competitions all over the world. He wanted the garage to be visible from the dining room so that during dinner parties the spotlighted cars would create drama for guests.

Working with architect John Mink and designer Meg Jonsen, the couple was open to suggestions. Mink, a proponent of Prairie-School architecture, immediately envisioned a low-slung house with a roofline that mirrored the hills behind it and a presence on the site that seemed organic. The couple agreed with his exterior vision, but they didn’t want a true Frank Lloyd Wright interior, which they felt would be too dark and woody. 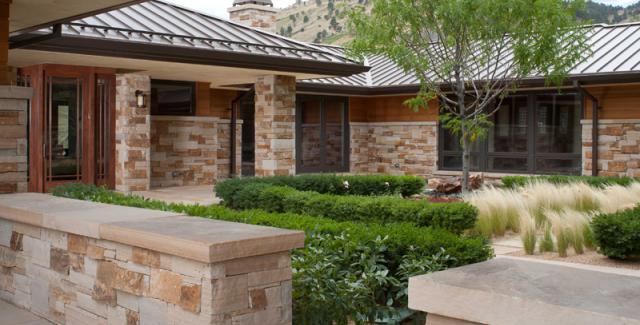 Mink sited the house in the northwest corner of the lot—not only to maximize the couple’s own views of the Flatirons, but also to preserve the neighbors’ vistas. The site was also lowered five feet so that from the busy road nearby, only the home’s roof shows. “We didn’t want to offend the foothills,” Jacobs says.

The horizontal exterior gives way to a soft contemporary interior, which, in spite of its 8,400-square-foot blueprint, feels warm and intimate. “We wanted rooms that felt comfortable for two people or 20,” Conway Jacobs says. True to their wishes, Meg Jonsen made sure each room stands as a unique space, defined by custom rugs and intimate arrangements of bespoke furniture. Curved alder soffits soften the horizontal lines that frame each exterior view. Coved ceilings offer indirect lighting, and at night the rooms take on a warm glow against the dark skies.

Much of the home’s greatness is subtle rather than over-the-top. The walls are a creamy Venetian plaster, which was applied by hand with a trowel, a process that took nearly four months. The walnut floors are warmed by radiant heat; the glass-to-glass corner windows (a la Frank Lloyd Wright) frame beautiful scenes; granite and onyx surfaces add elegance. “My father taught me to buy the best I could afford,” Jacobs says. This house is a testament to that advice.

The couple lives in about 5,000 of the 8,400 square feet. (The seven-car show garage and the studio and two guest suites that sit above it take up a considerable amount of the remaining space.) “Each room we use is so beautifully arranged, so warmly lighted, so comfortable,” says Conway Jacobs, “that one friend said our home was like being at the St. Julien Hotel [in Boulder], only cozier.”

For Jacobs especially, the home allows him to enjoy his “toys”—the cars he stations there when he’s not traveling to races. (His vintage 1966 Lola T 70 was once owned by Parnelli Jones; his 1968 Alfa Romeo T 33 was driven by Mario Andretti at Daytona.) No longer are they tucked away in a storage garage; they’re part of the decor, close enough to enjoy daily. As it should be for a man who worked hard, plays hard and has a wife who appreciates his passion.

This article appears in the April 2011 issue of Colorado Homes and Lifestyles.
Categories: Interiors, Landscaping & Gardening