Inside the Westin at DIA

Wings. A cruise ship. Even a mustache. Jeppesen Terminal’s white fabric peaks at Denver International Airport have long been compared to snowcapped mountains and tepees—even a circus tent—so it’s only fitting that the new Westin Hotel at DIA, connected to the terminal’s southern end, is already drawing real-life comparisons of its own. But the new hotel’s unusual form was influenced less by the desire to create a particular shape than by the need to keep a number of complex functions easy to navigate for hordes of travelers while squeezing intricate systems into a finite space. 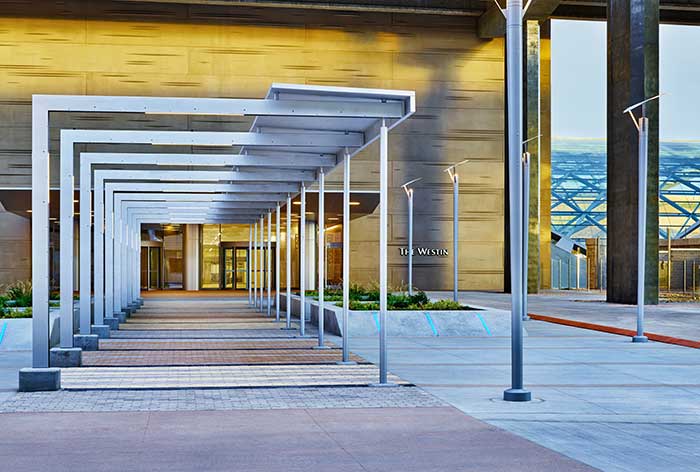 The curbside entry of the Westin welcomes guests through a “forest” of columns, celebrating an environment of movement.

In the works since 2008, when DIA hit its teen years and DIA Manager of Aviation Kim Day recognized the need for expansion, an earlier master plan was evolved to include an on-site hotel, conference center, and outdoor plaza to complement DIA’s and RTD’s growth plans, all within a highly confined site. The available space was regulated by the FAA’s mandated height limitation, while the adjacent roadways limited its width. 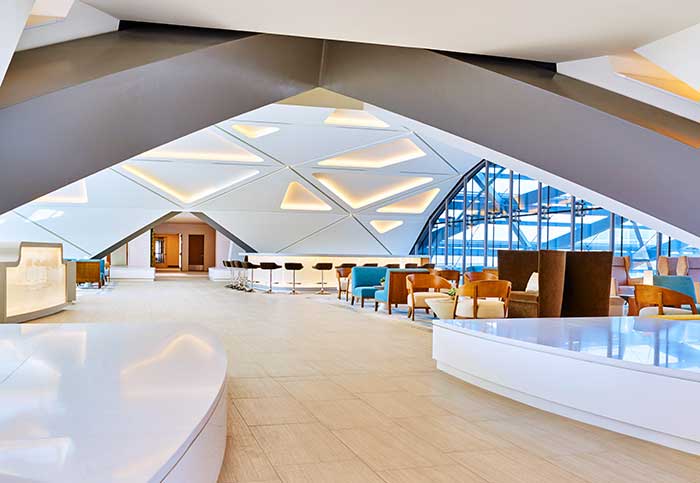 To satisfy DIA’s requirements, including optimal guest room count and high sustainability standards, the architectural team of Gensler and Anderson Mason Dale, along with S.A. Miro structural engineers, creatively considered the allowable space, eventually suspending the hotel’s east and west ends over the roadways. At the same time, the need to maintain an established view corridor to the Jeppesen tents—and meet visibility requirements from the air traffic control tower to the south cargo runways—resulted in the hotel’s gently dipping central saddle. “We put the biggest building that we possibly could in the smallest space,” explains Dave Mitchell, S.A. Miro’s senior project engineer.

Further honoring the original terminal, the hotel’s sleek surface reflects its white peaks, which dance across the ocean-hued glass to almost cinematic effect, mirroring colors, clouds, and shapes from the mountains and surrounding plains. “We knew that people wanted to come home to the Jeppesen Terminal. Our idea was not to compete with it, but to work with it to make an even stronger landmark,” says Kap Malik, Gensler’s design director.

“Our idea was not to compete with [Jeppesen Terminal], but to work with it to make an even stronger landmark.” — Kap Malik, Gensler design director 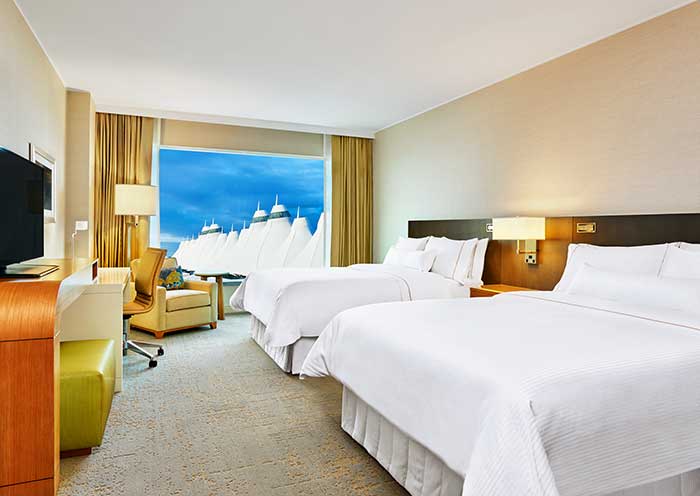 Inside the 519-room hotel, a large glass expanse presents jaw-dropping views of the Western landscape. The interior palette offers a sophisticated take on the colors and textures associated with Colorado’s natural beauty, putting travelers instantly at ease. So if the outline of DIA’s new Westin hotel may, for now, prove as shape-shifting as an afternoon cloud, there’s nothing elusive about the Western hospitality within.