2018 Home of the Year Finalist

One of the subtle charms of Aspen is its modest mining roots. Though the mines have long since closed, a vestige of the 19th-century silver boom remains in the T-shaped miner’s cabins that now sparsely dot the town. One such cabin, built in 1886, has become a second home to a family who splits their time equally between Dallas and Aspen, taking advantage of all the benefits of mountain living, from skiing to biking to hiking to just relaxing and enjoying the views.

Aspen was an obvious choice for the family’s second home. “Having lived in London, Tokyo and New Delhi, we’ve made a lot of friends all over the world. We have two grown boys as well—we wanted a home where our friends and family could gather often. Aspen is a town with global appeal. Everyone loves it, so it just made sense to have a home here,” says the homeowner.

Shortly after purchasing the cabin in 2012, the homeowners began working with Steev Wilson and his team from Forum Phi architects to draft plans to restore and expand it. The two-pronged goal of the project was to honor the historical origins of the structure, while adding a modern footprint with plenty of space to accommodate numerous guests. 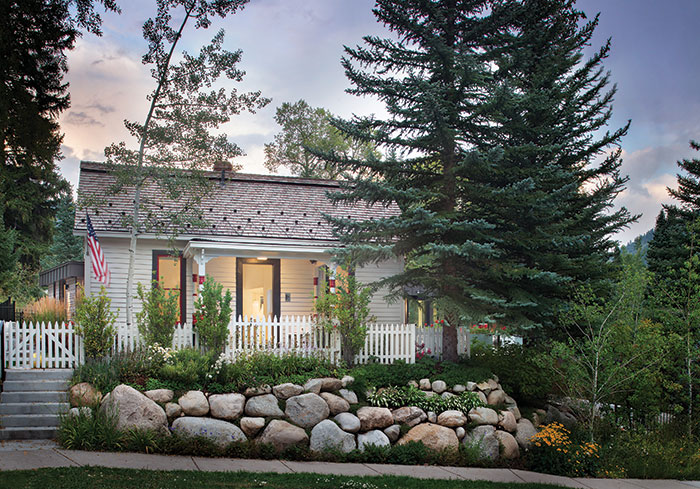 The cabin was restored to maintain its historical integrity. “This home will always work in Aspen,” Wilson says.

“This is the Tesla of houses. It’s sustainable, chic, stylish and meets all of our modern needs.” — Homeowner

The “process of discovery,” as the architect calls it, took a year and included hours of research at the city of Aspen Historic Preservation Commission to ensure its proper restoration. Wilson’s meticulous planning enabled him to add 2,688 square feet to the original 700-square-foot cabin.

Despite the increased living space, the home was designed with a strong sense of scale. There’s a charm and simplicity about the original cabin, so the modern addition, though substantial, was approached with restraint. “Unlike many Aspen houses,” says Wilson, “you don’t feel like you’re walking into someone’s ego.”

The humble cabin front set the tone with pops of red trim. “You step back in time when you enter but are immediately granted this unexpected light and bright space that looks like a modern-art museum,” says Wilson. “The cabin respects the historical aspects of Aspen’s humble mining roots, but by opening up the inside to celebrate the original T-formation, we created this wonderful juxtaposition where history meets modern living. It’s a home that reveres both history and art, so as such, we refer to the home as a beautiful jewel box,” Wilson says.

Beyond the box, walls and doors open onto multiple gathering spots. “We are in the sexy liquor business, so of course we’re party people!” says the homeowner, who, along with her husband, owns a top-shelf gin brand. “Every time Aspen has a celebration, we do too—New Year’s Eve, the Fourth of July and Wintersköl are some of our favorite times, because they involve fireworks which we can easily see from our house. We enjoy the veranda all year, and it tends to be a favorite spot for our guests, especially during parties. We can easily accommodate 80 guests, so our parties are always bustling and a lot of fun.”

When the crowds subside, the cabin becomes an art-filled retreat. The homeowners worked with Forum Phi to allow their contemporary collection to define each space. The main living area is gallery-like, with muted finishes, and every bedroom complements an individual piece of art, with bursts of color to match. Red is prominent throughout the home—and for good reason. The homeowners met while working at Coca-Cola, and the red Pantone used for paint matches that of the beverage company. Not only is the red theme an affectionate reminder of two people falling in love, it also, as the homeowner notes, “makes for wonderful holiday decorating—especially at Christmas and Valentine’s Day.” 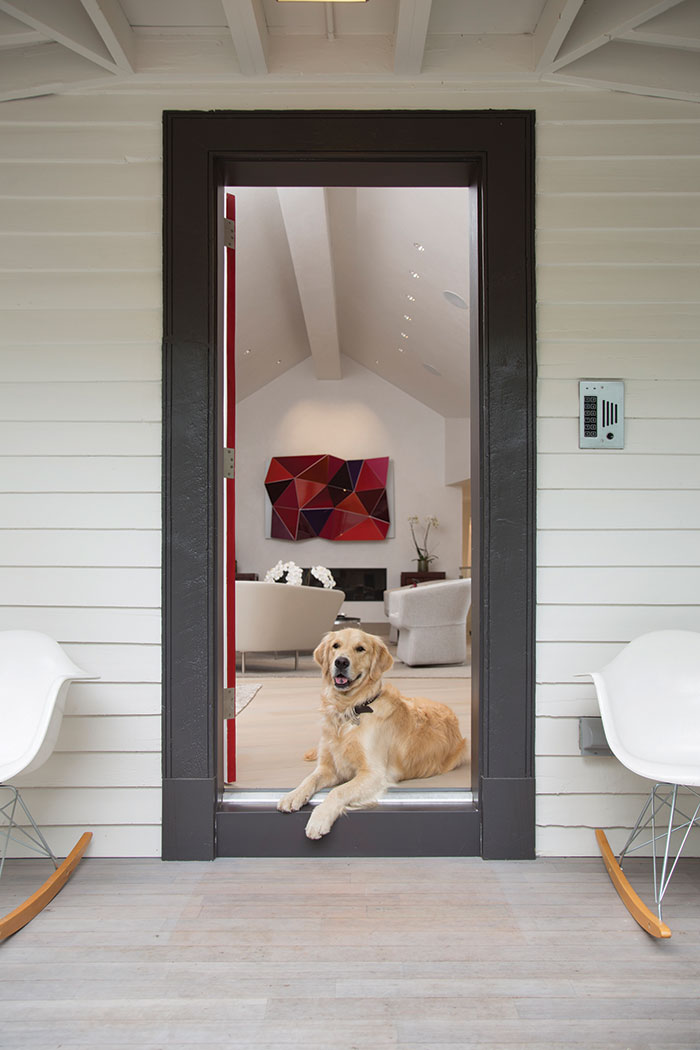 A walk across the historic threshold of the cabin leads to the contemporary addition. Local celebrity and Instagram star Jack the Pupp lies in the doorway, between Charles & Ray Eames rocking chairs.

“This house is different from many in Aspen. When you enter, it doesn’t feel like you’re walking into someone’s ego.” — Steev Wilson, Architect 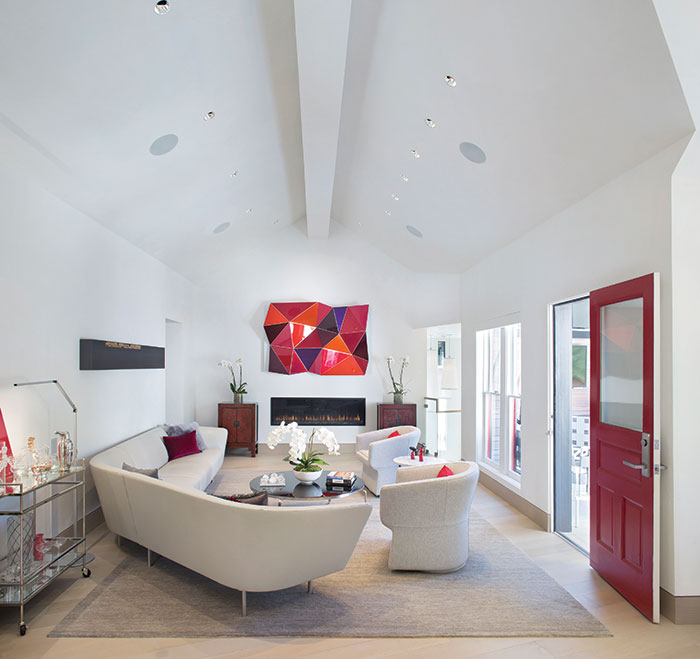 The ceiling beam from the historic gabled cabin stretches high across the muted, airy living space. Functional fireplace art Hard Candy 2016 by Christian Eckart conceals a television. The furniture—Viccarbe Fedele armchairs and an Arper’s Loop Sofa by Lievore, Altherr and Molina—adds to the gallery-like nature of the main living space. Vintage chests from the homeowners’ travels in Asia flank the Montigo fireplace. The aluminum wall sculpture is Wandkonsole by Madeleine Dietz. 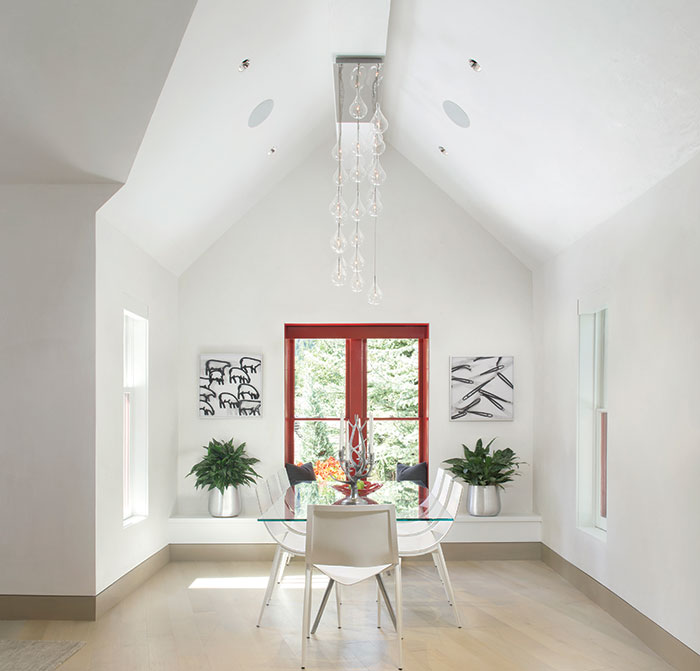 A custom light fixture by ET2 Contemporary floats over a dining table from Barcelona, flanked by Modloft leather chairs. On the wall: motion-card artwork Sheep and Minnows by Julian Opie. 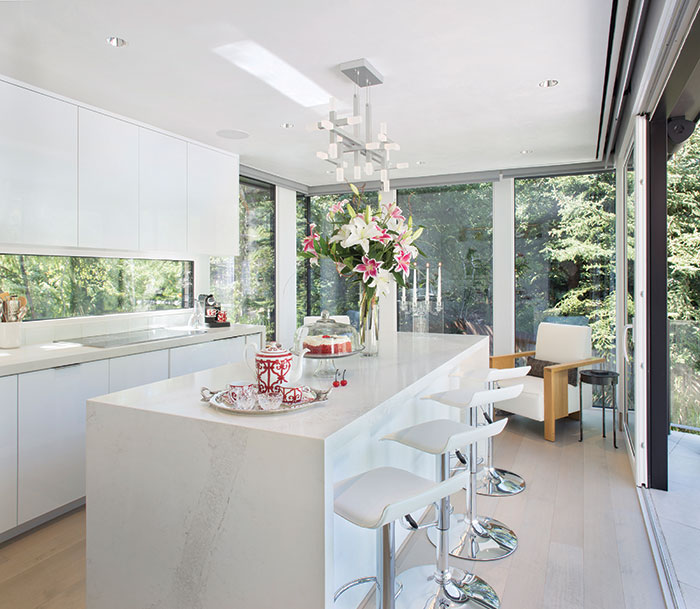 A Caesarstone island and accompanying countertops are ideal for the kitchen’s workspace. The white Thermofoil cabinets house a hidden surprise of Coca-Cola-red interiors. The light fixture is from Sonneman, and the china is Hermès Balcon du Guadalquivir. 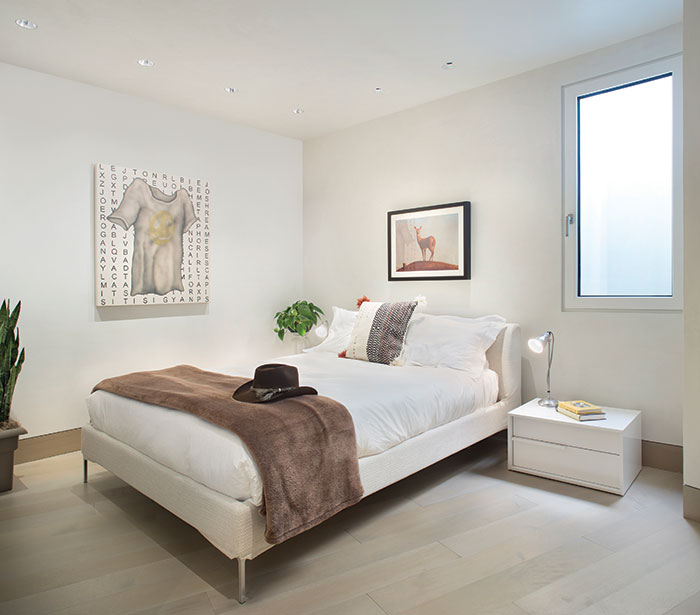 Like all bedrooms in the house, this one was designed around great art—namely Josh Reames’ Wordsearch, arcylic on canvas, and Bo Bartlett‘s Deer, giclee print. Bed is by Camerich. Nightstands are from Modloft. 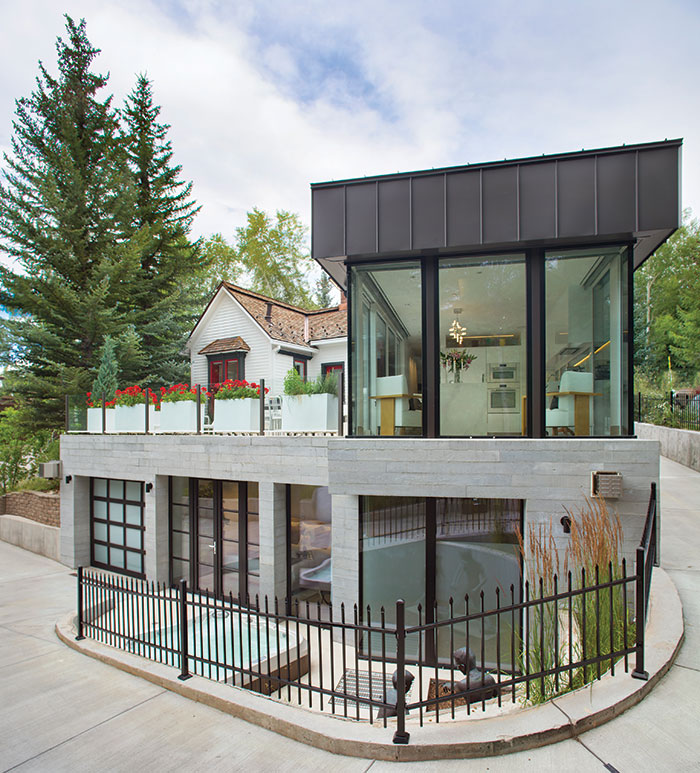 A view from the back highlights the juxtaposition of old and new, as well as the multi-use nature of this light-filled addition.

The graceful flow between indoor and outdoor spaces bridges the stark juxtaposition of the antique cabin and the contemporary addition. Emeco Navy chairs surround the Knoll Stromborg dining table. The sofa and chairs are from Karen, and the coffee table is by Pangea Home Outdoor. PureModern‘s Modern Elite Divider and Cube Planters house the flowers. 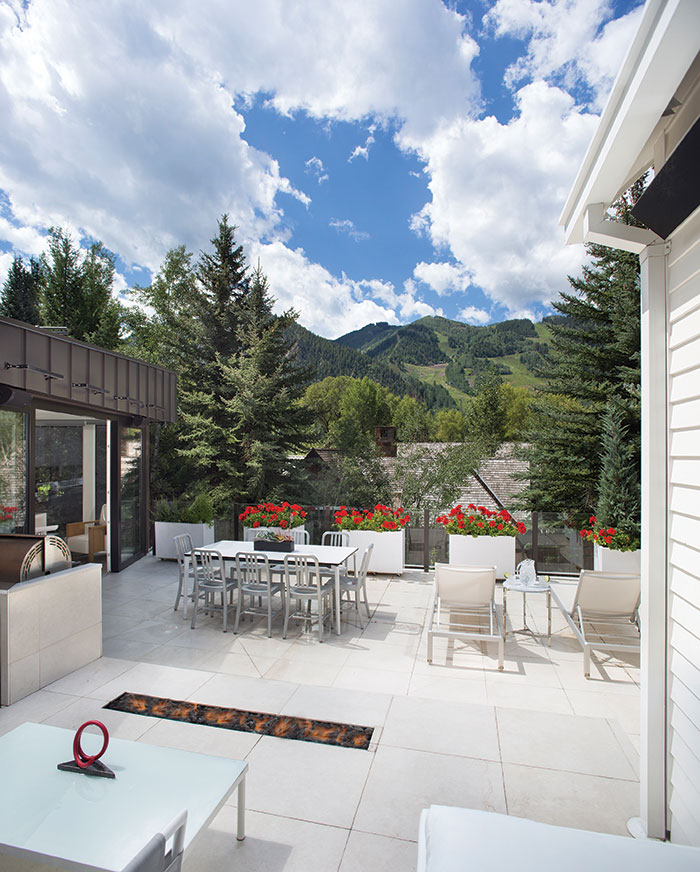 “My faith is really important to me,” says the homeowner. “When I’m in the mountains, I feel closer to God … and the mountain views from our home are breathtaking.” 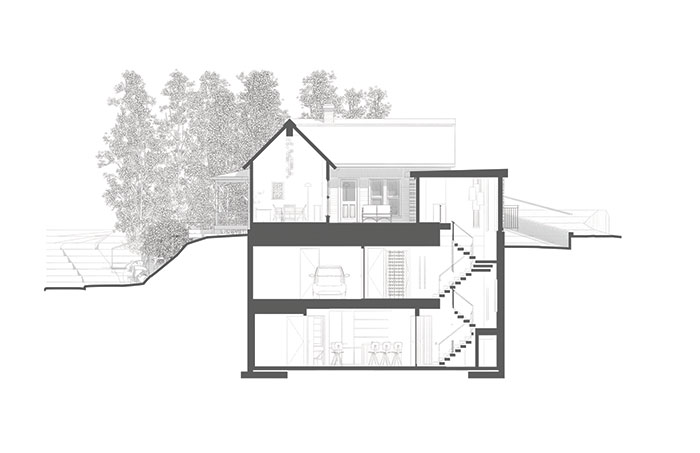 A side-angle sectional view of the addition shows the original cabin on top. 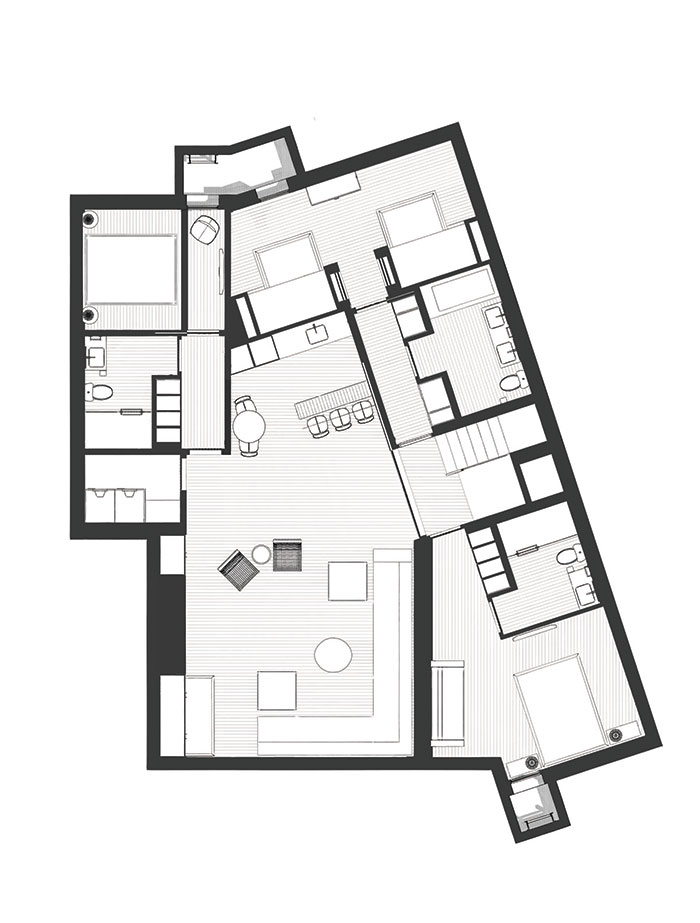