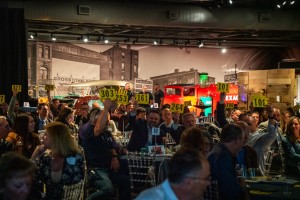 On October 13th, a crowd of nearly 300 gathered among the rare and exotic vehicles at the Vehicle Vault in Parker. They admired the cars, chatted with old friends, enjoyed delicious food and drinks and strategized on how to place the winning bid on a multitude of silent auction items. But the real reason all were there was to support and celebrate the Home Builders Foundation (HBF), a nonprofit that provides home modifications for individuals throughout metro Denver that are living with a physical disability. 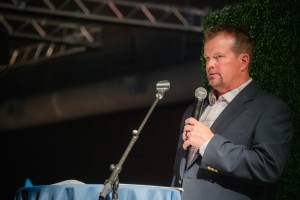 After a lead-in by HBF Board President Devin Bundy, Beth Forbes outlined how the attendees and community work together to make a powerful impact by elevating lives and fostering independence and safety. Forbes, HBF’s executive director, reported that the nonprofit is on track to complete 240 home modification projects for 120 clients by year-end. All work done by HBF ranges from simple grab bars and ramps to stairlifts, room modifications and home additions, which are entirely free to the clients. Much of the labor and materials for these projects are donated by builders, trade partners and suppliers in the building industry. The retail value of the projects that HBF anticipates completing by the end of the year equals $1.2 million. 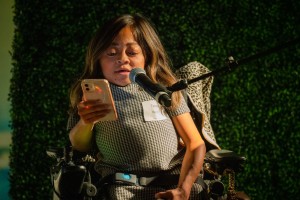 The real impact of Forbes’ remarks was felt when Teresa Nguyen took the stage. Nguyen, who was born with a brittle bone disease, spoke about the pleasure and independence she felt in purchasing her first home last year. She realized that she wouldn’t be able to utilize her home’s outdoor spaces until she could afford to make modifications that would allow her to access those areas. Nguyen was referred to HBF earlier this year by a friend, and by the middle of the summer, she was able to pursue her passion for gardening, entertain friends safely on her deck and play with her dog in the backyard. Nguyen thanked HBF and the volunteer crews who leveled her front and back decks, built a ramp and widened a doorway. 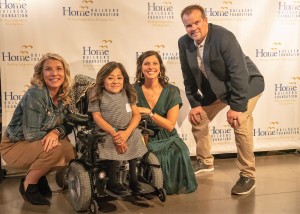 Nguyen’s heartfelt remarks were followed by a video featuring HBF supporters from various backgrounds who each play a role in elevating the lives of individuals with a physical disability. Each supporter spoke about the impact that being involved with HBF had on them personally. As the lights came up, the room erupted in applause as many individuals wiped tears from their eyes following the moving video.

The emotion continued into the paddle raiser, which raised a record $138,000. Forbes and Bundy wrapped up the evening with an advance invitation to next year’s annual celebration, which will mark HBF’s 30th anniversary and celebrate the valuable impact that has been made on the lives of more than 2,000 individuals.

To learn more about HBF, visit www.hbfdenver.org. You can also support the nonprofit through a donation on Colorado Gives Day.

Winners of the 2022 Denver Parade of Homes People's Choice Awards