Builder Chris Withers, on the other hand, admits he may have blinked once or twice. “This was one of the most complicated structural projects I’d ever seen,” says the founder and co-owner of Old Greenwich Builders of the four-bedroom, 4,800-square-foot home.

Case in point: The exterior is clad in 8×16-inch blocks of red trespa—a weather-resistant laminate paneling—and several shades of cement that were laid together like a jigsaw puzzle, with the windows cut to size. As if that weren’t painstaking enough, Withers also added a rain screen, suspending the blocks an inch and a half off the exterior to prevent water penetration.

The owners “were very committed to doing this as thoroughly and thoughtfully as possible,” says DuBrucq. But that would require the architect to design around a variety of zoning constraints. She would have to get creative with solutions that added to the home’s cutting-edge aesthetic rather than undermine the original vision. 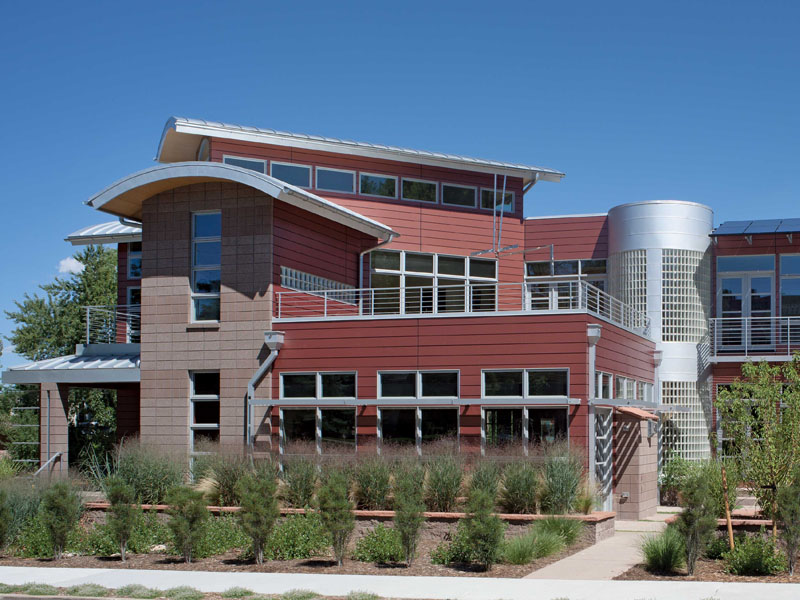 The couple, a geological engineer-turned-nature photographer and a nonprofit executive, wanted the house to look as modern and spacious as possible without appearing to be overscale. Zoning restrictions prevented DuBrucq from expanding the home outward, so she went up instead, creating a multi-level layout that combines flat modern rooflines with curved sections over three wings.

This vertical orientation also provides a dramatic backdrop for the family’s artwork. (The second-floor balcony was built expressly to showcase an original ’60s-era George Rickey kinetic sculpture.) And though the various levels were initially created to abide by zoning rules, they   have come to define the home itself. Visitors enter through main doors that are set three-and-a-half feet up from the street and then descend into a cozy sunken living room. A double-height section that leads to the third story rises from the center of the house, while a street-facing, two-story glass wall showcases the sleek hickory staircase. At the back of the house, a second spiral staircase encased in a steel tower lets the daughters run directly from their bedrooms to the basement playroom.

Smart design moves continue throughout the rest of the home. Outside the living room, an exterior glass-and-steel overhang above the room’s windows admits sun in winter but blocks heat in the summer. And inside, a minimalist Spark fireplace is surrounded by a cement hearth that exactly matches the exterior brickwork.

Operable clerestory windows at the peak of the double-height section allow light in from above, which streams through an opening in the bamboo floor and down into the center of the main living area. (This opening also serves as a chimney of sorts, sucking warm air up and improving overall circulation.) Down below, a rotating bookshelf separates the daughters’ study from the kitchen, dining nook and seating area.

All told, the home strikes a careful balance—pushing the design envelope with stunning modern elements, while providing space for down-to-earth family living.

“I think this was the crowning achievement of [DuBrucq’s] long, storied career,” Withers says. “There are only a few times in life that you get to design such an ambitious project.”

ECO-SECRETS
In addition to being architecturally striking, DuBrucq’s design is also environmentally sensitive. Here’s how the home minimizes energy use:

Green Roof: The flat areas of the home’s roof are covered in greenery that’s planted over a waterproof membrane, helping cool the home in the summer and prevent water runoff.
Geothermal Heating: The home’s heating system circulates water from five 250-foot-deep wells, where the temperature remains warmer than the exterior air in the winter and cooler in the summer. The water cycles through a furnace that transfers the heat or cold in the water to the rest of the home.
Solar Design: Rooftop solar panels and an abundance of carefully placed windows allow the owners to directly heat and power their home with the sun’s rays.