Friends since elementary school, they have long shared a passion for woodworking; in high school, they filled their afternoons tinkering in Dan’s dad’s garage and following instructions from library books about building furniture. Even after college, and into divergent and successful career paths in New York City, the two couldn’t squelch their need to tinker.

A rented space of 50 square feet in Brooklyn became their nights-and-weekends workshop. Within a year, a design award followed and Sex and the City called. Now, the always dressed-to-impress Danner and Chang-er (as they like to call each other) preside over a 16,000-square-foot space and a staff of 15. Chang-er took some time out between road meetings to fill us in. 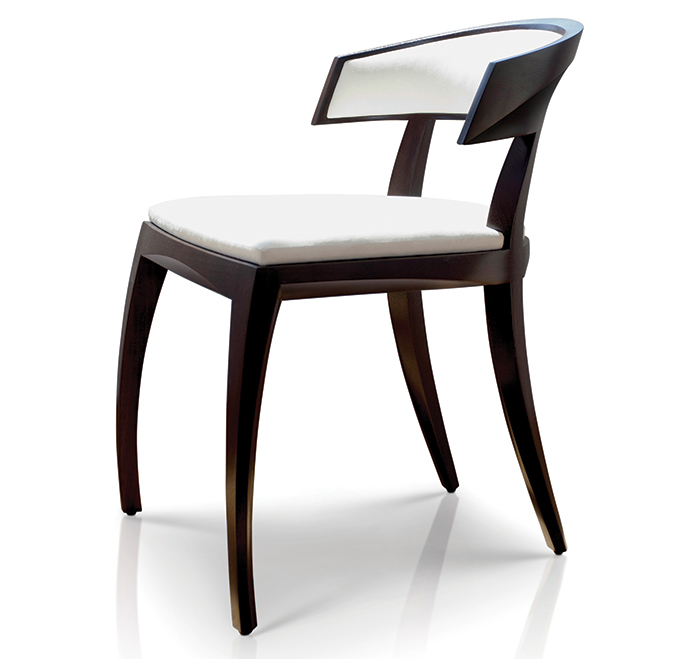 The customizable Hellman-Chang collection offers something unique for every room. Here, the Avery Chair.

WHAT’S THE DANIEL AND ERIC BACKSTORY?

We grew up in a nice suburban neighborhood in Maryland, right outside of Washington, D.C., called Potomac. It’s your standard American neighborhood—it has a great school system and great families rooted in strong values. Dan and I met in the sixth grade and instantly became really good friends. In high school we realized we shared a lot of the same interests when it came to art, design and doing things by hand—we both loved woodshop. As a fun hobby, we decided we’d teach ourselves how to build furniture. We’d go to the library for old-school woodworking books, and Dan’s dad would pull his car out of the garage and we’d tinker away with tools from Home Depot. 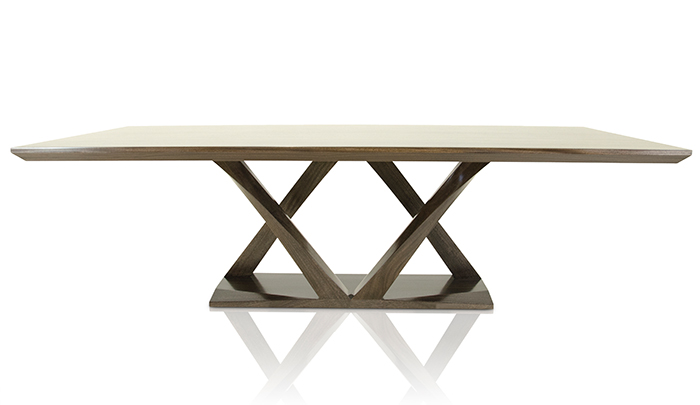 “My all-time favorite piece is the Z Dining Table,” says Chang. “It’s a conversation piece, a place where people gather to make memories.”

“In high school . . . we decided we’d teach ourselves to build furniture. We’d go to the library for old-school wood-working books. Dan’s dad pulled his car out of the garage and we tinkered away.” — Eric Chang 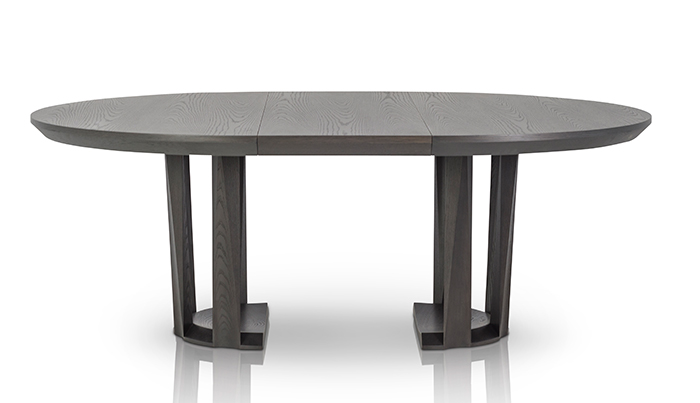 WHAT WERE BOTH OF YOU DOING CAREER-WISE BEFORE STARTING YOUR COMPANY? I studied finance and marketing at NYU, while Dan studied classic guitar performance at Northwestern. Both are obvious backgrounds that define furniture making (said with a chuckle). I actually never got into finance. Instead, I helped start up a marketing agency my junior year of college, and within a year or two we were ranked the 56th best private company by Entrepreneur magazine. The agency grew very quick and was highly successful—that was my nine-to-five. After Dan graduated, he moved to New York and took a job at a music agency booking talent for big venues like Lincoln Center. 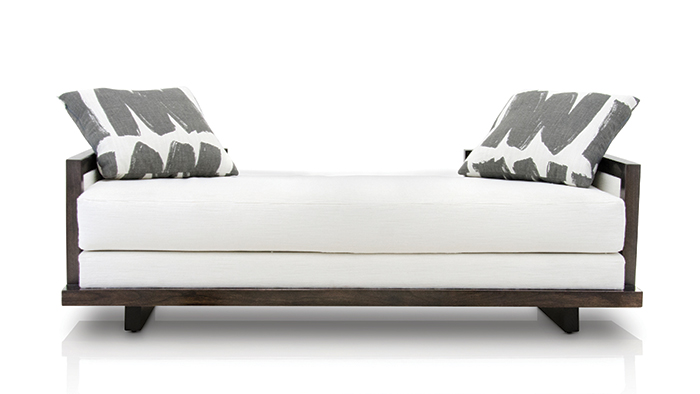 WHEN DID FURNITURE BECOME YOUR FOCUS?

We had really different career paths, but as we were hanging out in New York, we spoke a lot about how we missed woodworking. We were lucky to find a co-op on Craigslist in Bushwick, Brooklyn. It was a large space shared by woodworkers, sculptors—all types of artists. We rented 50 square feet with access to a shared machine room with amazing equipment. That’s where we spent our nights and weekends. We were paying rent for a tiny space equal to what my friends were paying for nice apartments in Chicago. So we designed a few pieces to sell and that started the idea for our brand. On a whim, we submitted our Z Pedestal to Interior Design magazine’s 2006 Best of Year awards. It ended up winning! We were 24 and there was a wonderful ceremony at the Guggenheim Museum. I remember distinctly Cindy Allen, the editor-in-chief of the magazine, leaning in and saying, “Who the hell are you?” That was our formal introduction into the industry. 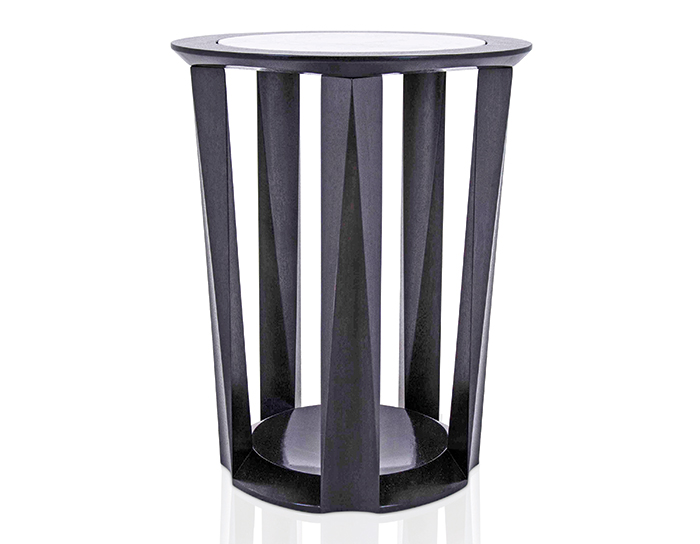 AT WHAT POINT WERE YOU ABLE TO QUIT YOUR DAY JOBS?

The Z Pedestal was published in the magazine, and a week later we got a call from representatives for the new Four Seasons in Seattle requesting a redesign of the pedestal as a restaurant bar table. They wanted 15. That was huge! Our second client came shortly after—it was Sex and the City 2. We turned the pedestal into bedside tables for Carrie and Big’s bedroom. From there, we picked up Gossip Girl and they ended up writing us into the script! It was a very quick trajectory for the brand, and that gave us the confidence to quit our day jobs. 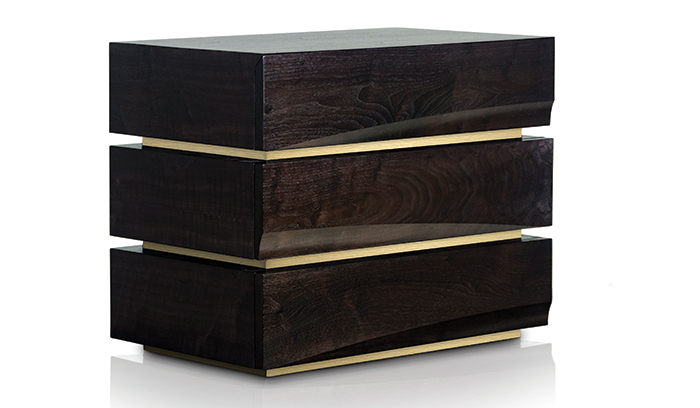 WHAT INFLUENCES YOUR DESIGN?

Having never gone to design school, it’s tough to say. For us, we want to emotionally connect with other people, and our medium for doing so is furniture. There are a lot of great designs that we throw away—they could be beautiful or potentially great sellers, but if they don’t fully convey the feeling we want our brand to represent, they don’t help grow it. There are also are a few core tenets we try to abide by when designing. First, our designs must be timeless, especially at this level of quality—they need to be relevant for a lifetime. Second, each piece has to have a beautiful balance proportion. Third, there’s a focus on negative space and how it changes as you walk around the piece, as well as great attention to detail when it comes to surfaces—how light reflects off a tabletop, for example. 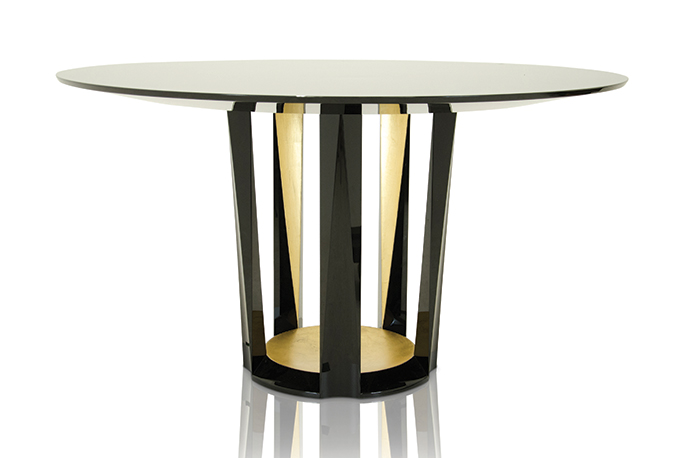 WHO INSPIRED YOUR MAD SARTORIAL SKILLS?

My grandfather had been a high-ranking general from Taiwan who immigrated to the U.S. after retirement. To him, it was important to treat others with the utmost respect and to present himself with the utmost respect. Dressing impeccably and speaking eloquently were important to him, and that is something I took from him and looked up to. Early on, Dan and I were meeting with big designers and we didn’t yet know the industry or the jargon associated with it, so we had to dress the part. Almost immediately people would notice our sense of style and subconsciously felt that we knew what we were doing. Because of that, our style became an important part of the brand. Even when I’m not traveling, I go to the woodshop wearing a suit.

The Hellman-Chang collection is available in Denver at Town Studio and at hellman-chang.com. Prices start at $14,850.