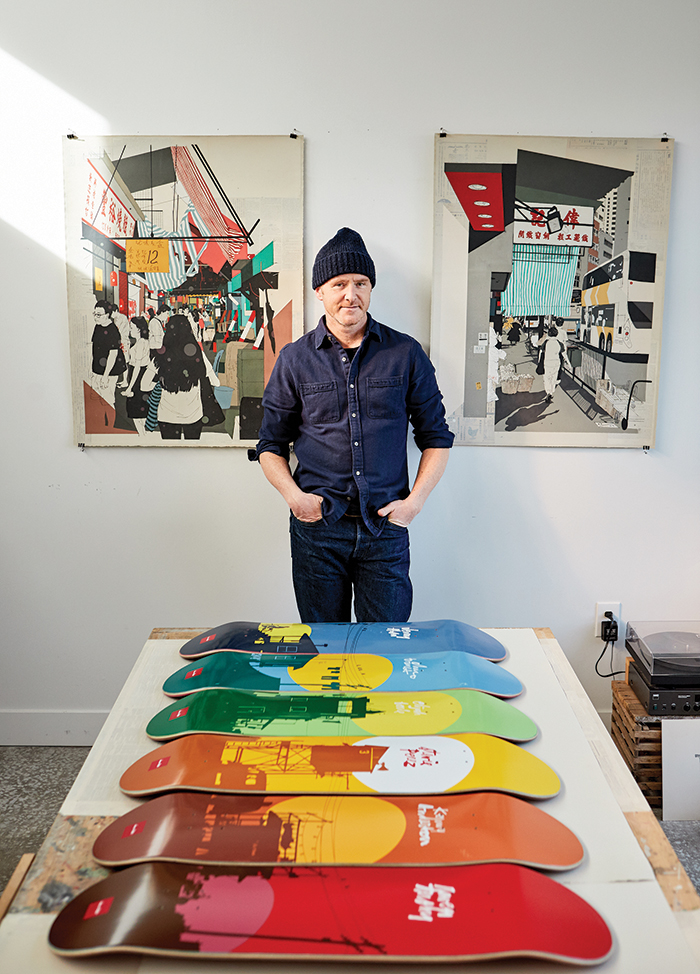 At age 45, Evan Hecox broke his collarbone while attempting a precarious trick, prompting him to hang up his skateboard for good. That skateboard and a few others now adorn the backyard studio he built at the Denver Highlands home he shares with his wife and 14-year-old daughter. Hecox, a Colorado native, has spent almost 25 years in the industry, designing more than 300 boards, mainly for Chocolate Skateboards. Today he combines his board work with an expanding fine-art practice.

The pristine, 600-square-foot studio contains replicas of a Donald Judd worktable and chairs that Hecox built himself, an antique seed cabinet, a vintage turntable stereo with a wide collection of indie rock records, and a “not-too-serious” bar. Hecox’s father was also an artist, so when he died, Hecox inherited his printing-press cabinet, woodworking bench, tools, pens, paintbrushes and even his compass. “Having my dad’s things in my studio is important to me,” says Hecox, who uses them daily.

The walls are lined with artwork waiting to be framed or on its way to a gallery or client. The space above his desk holds a collage made by his father, a photo of his daughter and a Will Rogers’ quote in old-school typewriter font: “If you want to be successful, it’s just this simple. Know what you’re doing. Love what you’re doing. And believe in what you’re doing.”