Any developer can throw a couple of solar panels on the roof and call a house “green.” But as the next generation of Colorado green developers knows, it takes a little more effort to attract today’s savvy eco-conscious buyers.

“As a developer, you want to build something that really stands out from the competition,” says Mark Kostovny, co-founder of Solar Village, a Boulder-based green-building company. “With the economy the way it is, people want to see concrete results—like their energy bills going down by 50 to 80 percent. Otherwise you’re just ‘green lite.’”

You’d be hard-pressed to call Kostovny’s results “lite.” The average utility bill on an 1,800-square-foot custom home he built last year in the mountains is $18 per month, even during the winter.

For Kostovny and other green developers, the key to success is in the construction. Rather than building traditional houses and gussying them up with costly green appliances and finishes, many of today’s developers are building differently from the ground up.

But here’s the catch: what they are doing is not technically new. They are borrowing tried-and-true building and living concepts—ones used for centuries by American Indians and in historic European villages—to  make entire communities naturally energy-efficient and sustainable. Moreover, these developers are making homes affordable, and in doing so, they are making green homes attainable for more Coloradans.

Take, for instance, the concept of passive solar heating and cooling. In traditional homes, heaters and air conditioners can account for up to 50 percent of energy use. But passive solar homes cut these costs with a simple solution: south-facing windows let in sunlight in the winter, and awnings block the sun’s heat in the summer. Add ultra-insulated walls and energy-efficient windows to prevent airflow to and from the outdoors, and you’ve got a house that will maintain a comfortable temperature with relatively little energy intervention. That means fewer solar panels and more cost savings.

“If you look at the original adobe dwellings in the southwest or at Greek homes on the Mediterranean, you’ll notice that people have been doing this kind of stuff for years,” Kostovny says. Back then—as now, perhaps—people’s eco-consciousness was motivated by cost and necessity. That’s why, Kostovny says, the trend today is “going back where we came from.” All it takes is a little common sense in building.

You don’t have to look hard to find more examples of basic resource conservation. At Geos, a green community under construction in Arvada, European-born developer Norbert Klebl is building mixed-use, passive solar and geothermal homes that he estimates will consume 75 percent less energy than traditionally built homes. The community has also been designed with water conservation in mind—the neighborhood’s vast open space will be xeriscaped with drought-resistant and native plants. And parks will be built a few feet below street level, so that rainwater will run off into the grass rather than into drains.

Other green developments are borrowing age-old sustainability
practices in the form of co-housing and sharing of resources. At Washington School—the forthcoming renovation of an old elementary school property in North Boulder—developers are planning shared spaces such as a community food garden and common rooms for bi-weekly neighborhood dinners.

Developers in other communities have planned comprehensive networks of hiking and walking trails that will make it possible for residents to forgo their cars. At Caribou Ranch, a 40-acre development outside of Nederland, trails will lead to and from the local elementary school and grocery store. 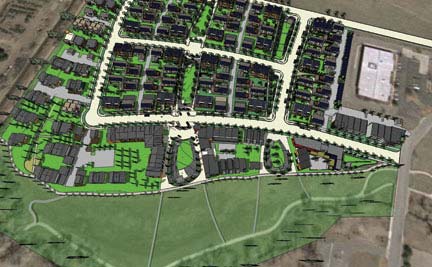 This article appears in the January-February 2009 issue of Colorado Homes and Lifestyles.
Categories: Exteriors, Stylemakers