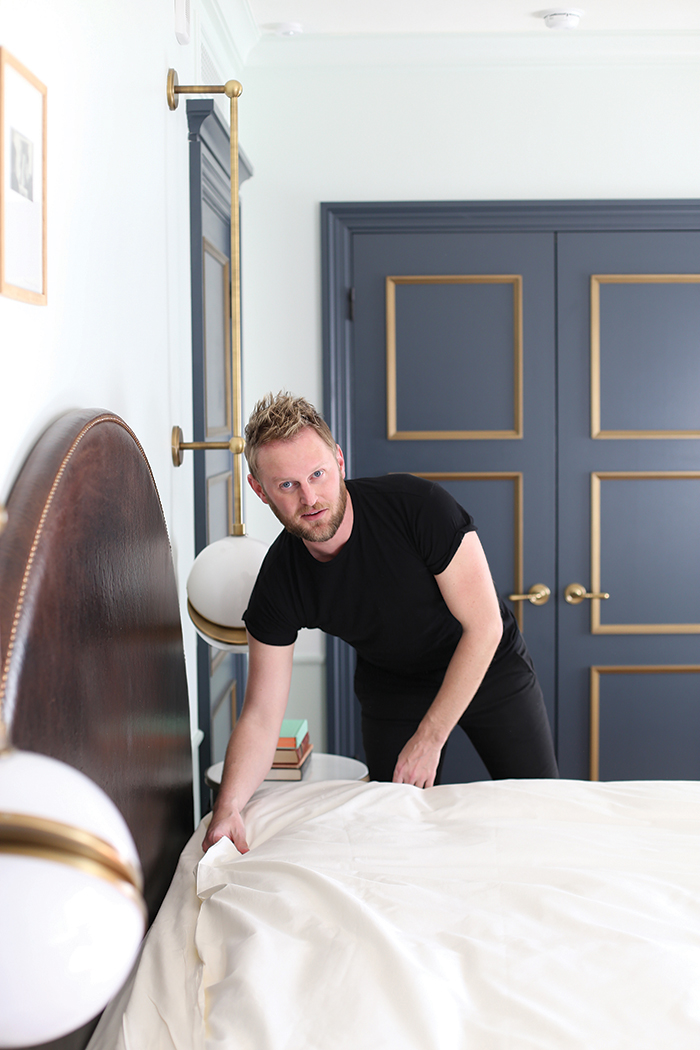 Bobby Berk never wanted to be a celebrity. But in the past whirlwind year, the 36-year-old designer and star of Netflix’s Queer Eye makeover series has found himself on the cover of countless magazines, pasted on national billboards and seated in talk-show sofas, all alongside his Fab Five cohorts.

“This was never something on my list,” he says. “I guess I just got really lucky.”

His backstory proves that luck isn’t as prominent in his success as are grit and perseverance. Raised in what he calls the “Middle of Nowhere, Missouri,” Berk ran away from home at 15 to escape his deeply religious farm-town community. Although he had an interest in design, the cost of a formal education was out of the question at the time, so instead, he spent his late teens and early 20s working his way up in the retail industry.

“My life was either work or starve,” he says. 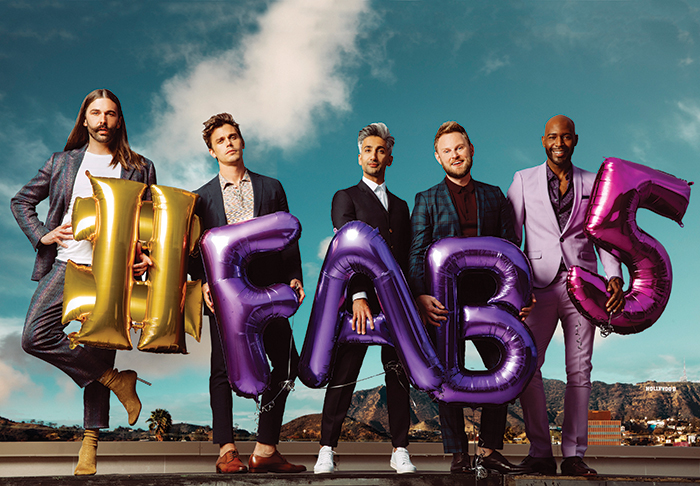 By way of a four-year stint in Denver, Berk landed in New York in 2003, where he managed a Restoration Hardware and later became creative director of Portico Home + Spa, until the company declared bankruptcy in 2006. Out of work, Berk registered bobbyberk.com “in a panic,” and started selling furniture. The online business’s unexpected triumph paved the way for multiple brick-and-mortar stores and eventually led to Berk opening his own Los Angeles-based design firm in 2015.

Now, as the design expert on the reboot of the early 2000s’ Queer Eye for the Straight Guy, Berk has the seemingly impossible job of stepping into the unkempt homes of strangers, assessing their style and making over multiple rooms in less than a week. In its first two seasons, Queer Eye has gained a cult following to its lovable, exuberant cast, as well as its uplifting and sometimes tear-jerking encounters with makeover-ees that touch on self-esteem, sexual identity and social issues.

“We did not go in thinking that the show you see was the show we were going to do,”explains Berk. “But when we got to that first episode, we realized that we needed to be helping these guys on an emotional level, not just a superficial level. We decided to get to know them personally and listen, and because we did that, it opened up the door to a lot of conversations we never thought we’d have.” 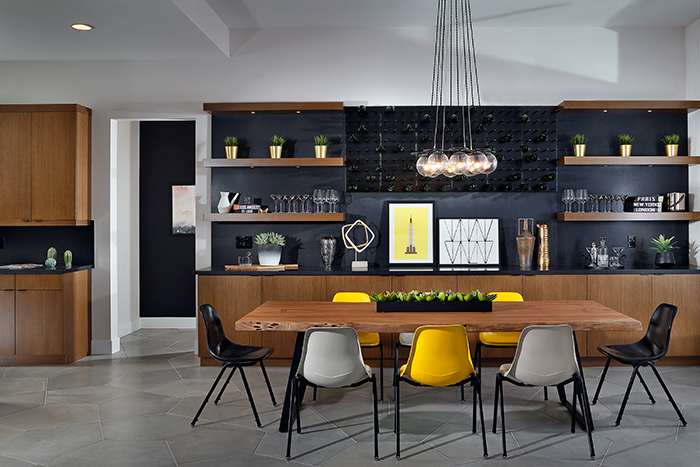 WHAT INITIALLY DREW YOU TO DESIGN?

I remember the exact moment. I was around 8 or 9, and I saw the Michael Graves teakettles and spatulas and toasters at Target—it was the very first designer collaboration they did. Growing up in Missouri, design just wasn’t a thing. I had never seen things in the home that served a purpose other than what their function was. If there was a toaster, it wasn’t pretty. It wasn’t supposed to bring you joy. So I remember standing in that aisle, looking at those pieces and being flabbergasted by how cool they were.

TELL US ABOUT YOUR TIME IN DENVER.

I was 18 when I made the move, and I remember coming over the hill on I-70 and seeing Denver laid out in the valley. I pulled my U-Haul over, and I was like, “Oh my god, I’ve made a huge mistake. This city is so big.” I remember thinking I was never going to survive there. In 2003 it was still a sleepy town, but to me, it was super scary. I go back now, and I’m like, ‘gosh, I wish Denver then was what it is now.’ I probably never would have left!

HOW DOES THE QUEER EYE REBOOT DIFFER FROM THE ORIGINAL?

The original cast was a little more negative, and they showed the straight guys what was wrong with them, whereas we try to show the guys everything that’s good about them, because we see it; they just don’t see it, and that’s the problem. We wanted to make sure we stayed positive and very uplifting.

And I don’t think the original cast was intentionally negative; I think it was a different time. People were fine with gays on TV if they stayed in their lane—if they were designers and cooked and were hairdressers, and they were catty and funny and bitchy. So I think they kind of had to play that up because that’s what the world was comfortable seeing. Now the world is more comfortable seeing me as a husband and Karamo [Brown, Queer Eye's culture expert] as a father and us as just regular people. To us, it’s not that we’re five gay guys coming in to help you. It's that that we’re five people who are experts in the things that we do, and we just happen to be gay. I think being gay was at the forefront of the original, where being gay now is just part of who we are. 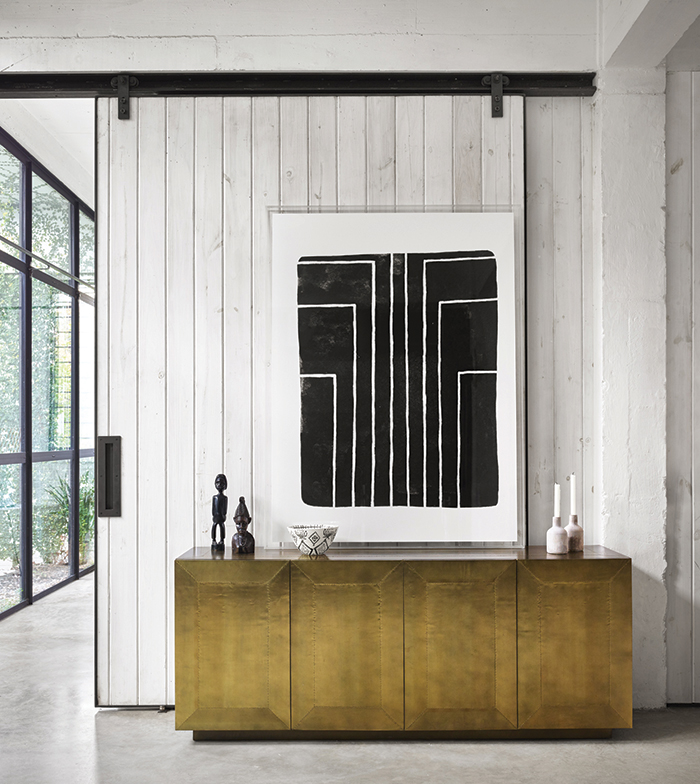 HOW DO YOU DO AN EXTENSIVE HOME MAKEOVER SO FAST?

There are actually six of me. It’s kind of like Full House, where there were two Michelles but you didn’t know it—no, I’m kidding. But I do have a really great construction team that does all the painting and building, and a team of five who help me stage all the furniture, accessories, lighting, rugs, bedding. I design it, but I have people who help me execute it.

HOW DO YOU ASSESS A STRANGER’S STYLE?

We usually get a one-sheet the week before as a jumping-off point­­­—What’s your favorite clothing brand? Color? Ideal vacation spot? Home store? Six or seven of the first eight guys said Walmart was their favorite home store. I’m like, that’s not a home store!

For the show, wardrobe really wanted me to wear bright colors—literally, I think at one point the creator of the show said, “I want Bobby to look WASP-y! Like Clifford from Connecticut!” But no, that’s not me. My white, pasty skin does not look good in bright colors, so I wear a lot of black and navy when I dress. And it’s kind of the same for my design. I’m not afraid to use color, but I gravitate toward more masculine, dark colors and neutrals. I’m definitely more on the modern, minimalistic side, but I love using layers of textures and patterns in the same color palette to create more depth in the room instead of using bright colors, which to me just distract.