And Then There Were Six

After adopting six boys, a young couple builds a home in Larkspur with plenty of space for their new family of eight

December 25, 2014, was not just another Christmas Day for Nicole and Pete Cassara. That morning the Castle Rock couple opened their home to welcome two sons—brothers Chris, 2, and Isaac, 1—into their world. “It was the most overwhelming day of my life,” says Nicole of the couple’s mini miracles. That evening, the new parents, along with Nicole’s parents, brother and sister-in-law, celebrated the homecoming and holiday by sitting down to their first meal together and watching the boys open gifts. “Being around all those people and opening those presents, they had never had anything like that before,” Nicole says. “I think in that moment, I sat back and realized, ‘This is it. We’re forever changed.’ ”

Not a surprising reaction for a new mom, but a seismic shift for a couple who never thought they wanted children. Nicole, who has a master’s in nonprofit management, reimagined their life plan after doing a great deal of research on at-risk children and hoped to make a difference by adopting young girls from countries that had high numbers of human trafficking. “She came home one day and said out of the blue, ‘I want to adopt,’ ” Pete recalls. “Her heart—and eventually mine too—was set on it, and I said, ‘OK, let’s do this.’ ”

Two years later, they were still waiting. “We were on a list behind hundreds of other American families. It’s not a need if there are people in line, so we switched our search to domestic adoption,” Pete says. Nicole adds, “We also switched from girls to boys because girls were in such high demand.” That adjustment led to their spectacular Christmas morning and ultimately, exponential growth of the Cassara family.

Less than a year later, the phone rang again. The social worker who brought them Chris and Isaac called with the opportunity for Pete and Nicole to adopt four more boys all living in the same foster home—Logan, 9, Eli, 5, Joe, 3, and Ethan, 18 months. Their answer, again, was, “Yes!” “We had no intention of scaling to six kids in just 11 months, but that’s the way it worked out,” Pete says.

Nicole and Pete worried that Chris and Isaac would be hesitant to welcome the new additions, but it didn’t take long for the boys to become brothers.

“At first, they were timid and shy and didn’t know how to take it all in,” Nicole explains. “But after just a few days, they were playing and roughhousing and being kids together.”

“I want this to be a place they want to be, that they love coming home to.”
— Nicole Cassara

The brotherly bond grew deeper when Isaac, who has sickle-cell anemia, was admitted to the hospital for a week due to low oxygen levels. Nicole recalls the scene in the hospital room: Three boys sat on the bed with Isaac, watching Toy Story; another rubbed Isaac’s head; another fed him snacks. “I stopped and thought, ‘This is what family is.’ Even during the hard times and crud, it’s peaceful and encouraging,” she says. “It was a painful week, but I wouldn’t trade that moment for anything.”

Though the boys adjusted well, the Cassaras’ cramped, three-bedroom home in Castle Rock did not. There were holes in the walls within the first week as a family of eight, and fitting six kids in two tiny bedrooms quickly became a test of patience. “You’d have kids hanging off the lofted beds and ladders. If anyone decided to move or jump, they’d land on someone else,” Nicole says.

“I was very politely threatened to get us the hell out of that house,” Pete adds with a laugh. “We needed much more space.”

The couple bought a wooded lot in Larkspur, with more than five acres of land where the boys can run, climb and play. They enlisted builder and close friend Jason DeYoung of DeYoung Brothers Construction to create a six-bedroom, 7,000-square-foot space with a seamless floor plan and plenty of natural light. Nicole, an interior design consultant for over a decade, mixed white oak floors with modern finishes, a neutral color palette, and furnishings built to withstand sticky fingers and spilled milk. With a 2,000-square-foot downstairs play area plus a zip line, tree house and trampoline outside, the resulting home is a dream for the rambunctious boys—who now range in age from 3 to 11—and their “free-range” parents.

“Our intention here was to old-fashioned kick them out the door and say, ‘Just go be boys. Climb things and fall down and be outside,’ ” Pete says. “We wanted to be in a space where we could be comfortable and confident that they’re not getting in trouble.” 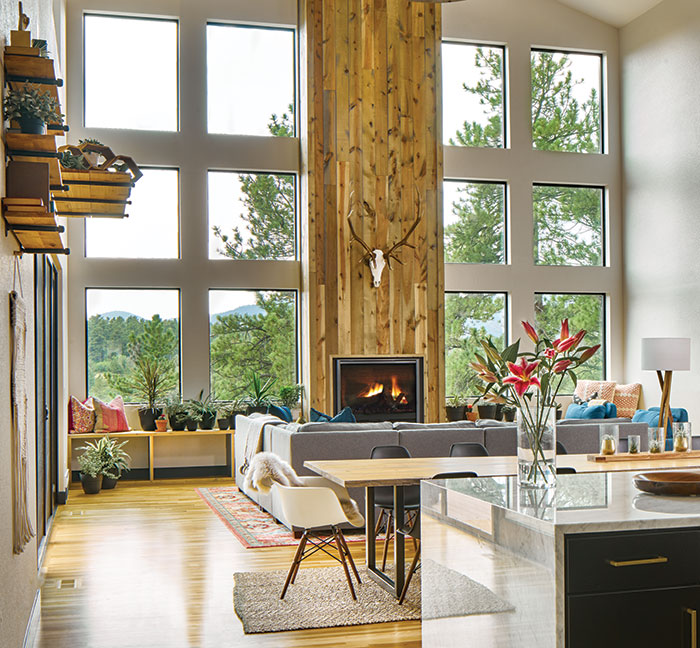 “I wanted to be outside as I was sitting inside,” Nicole says of the great room’s grid of Pella windows that stretch from floor to ceiling, and frame views of the foothills beyond. A West Elm sectional cozies up to the fireplace; an elk skull found on Craigslist hangs above. 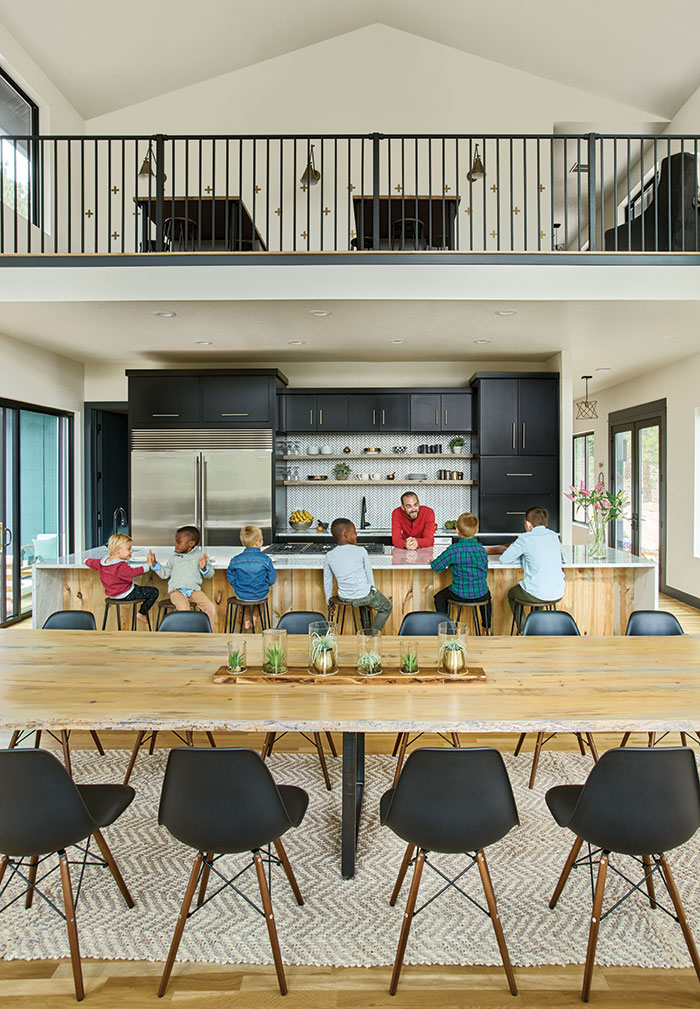 The kitchen’s oversized waterfall-edge marble countertop provides enough space to “dish out food like a diner,” says Pete, pictured here with his six sons. A reclaimed-wood-slab dining table seats 14, “so that when the boys are dating or married someday, they can have their spouse over for dinner,” Nicole says. 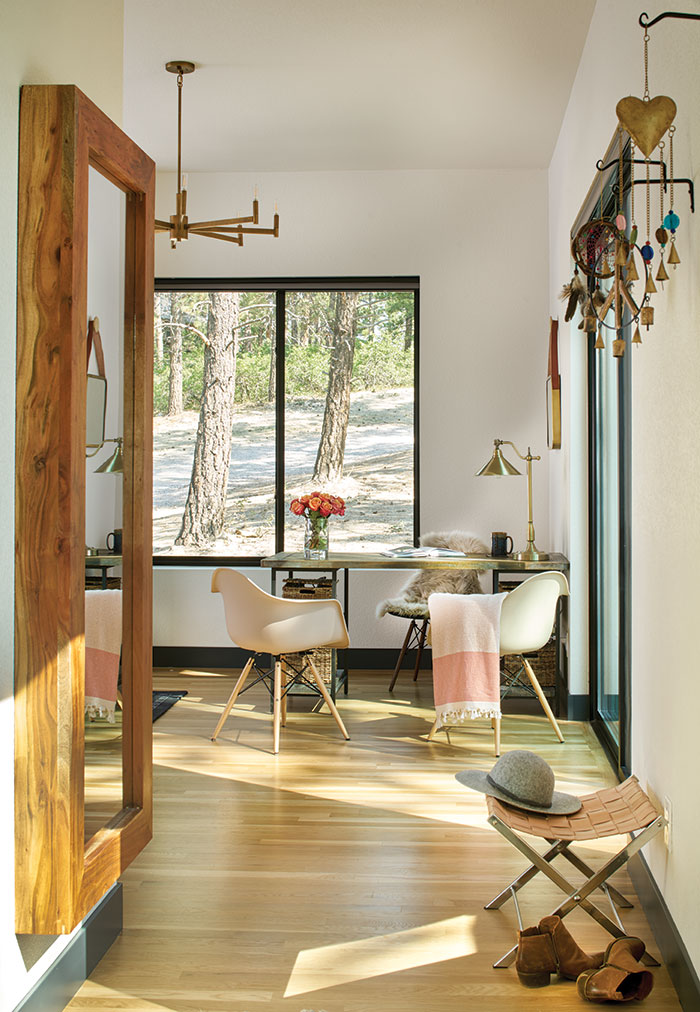 In between prepping lunches, doctors’ appointments and carpool, Nicole works full time from her home office, which includes a brass-top desk from Overstock.com and chairs from AllModern.com. To the left of the entry, a full-length box mirror from Home Goods adds depth; to the right are wind chimes and a dream catcher purchased on a trip to Yelapa, Mexico. 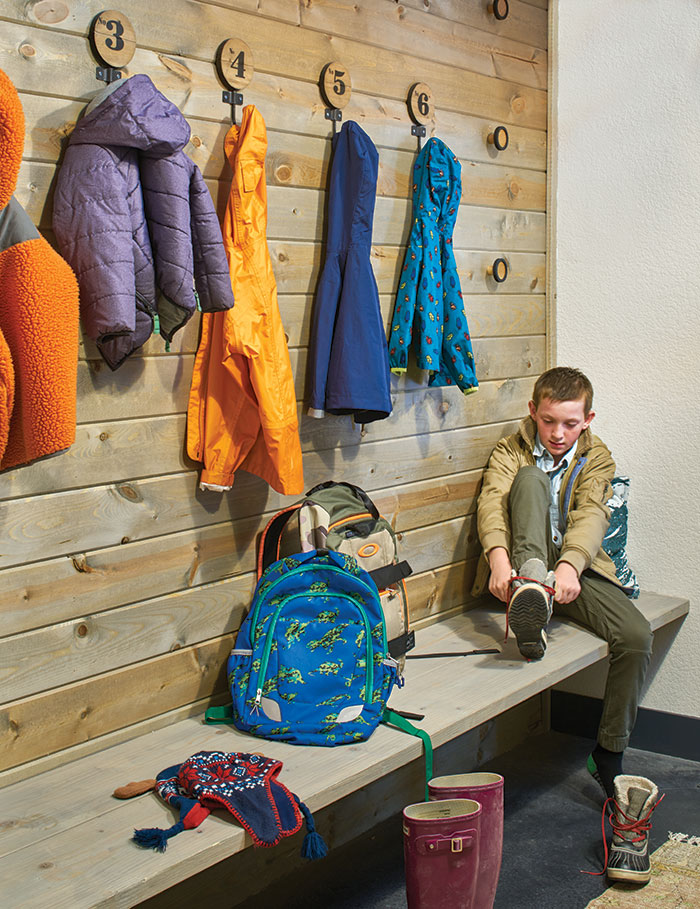 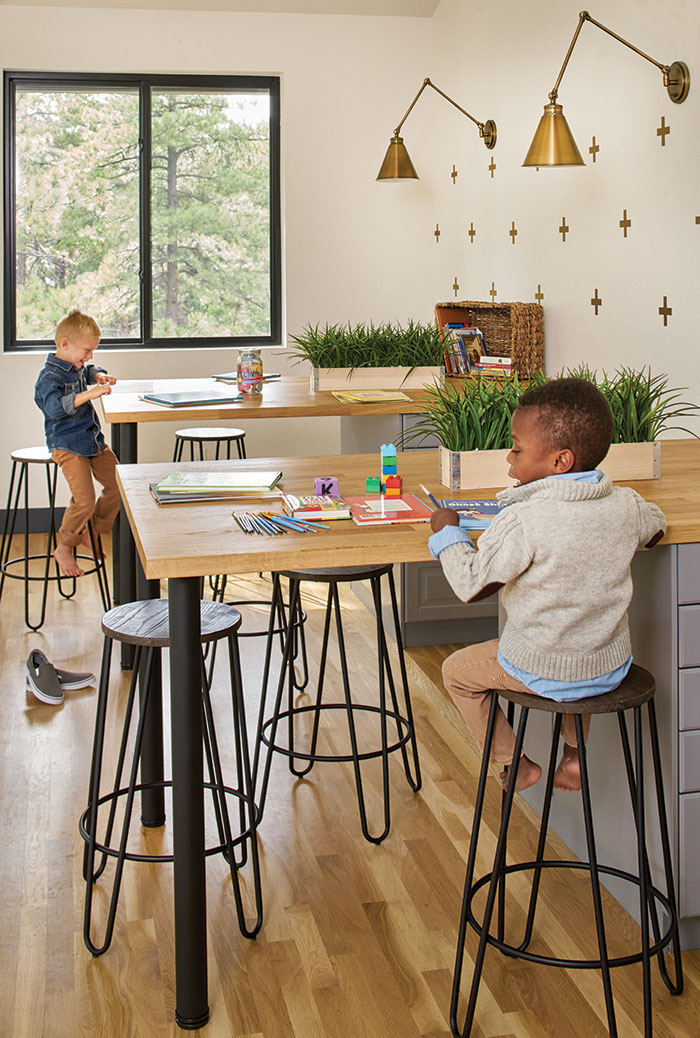 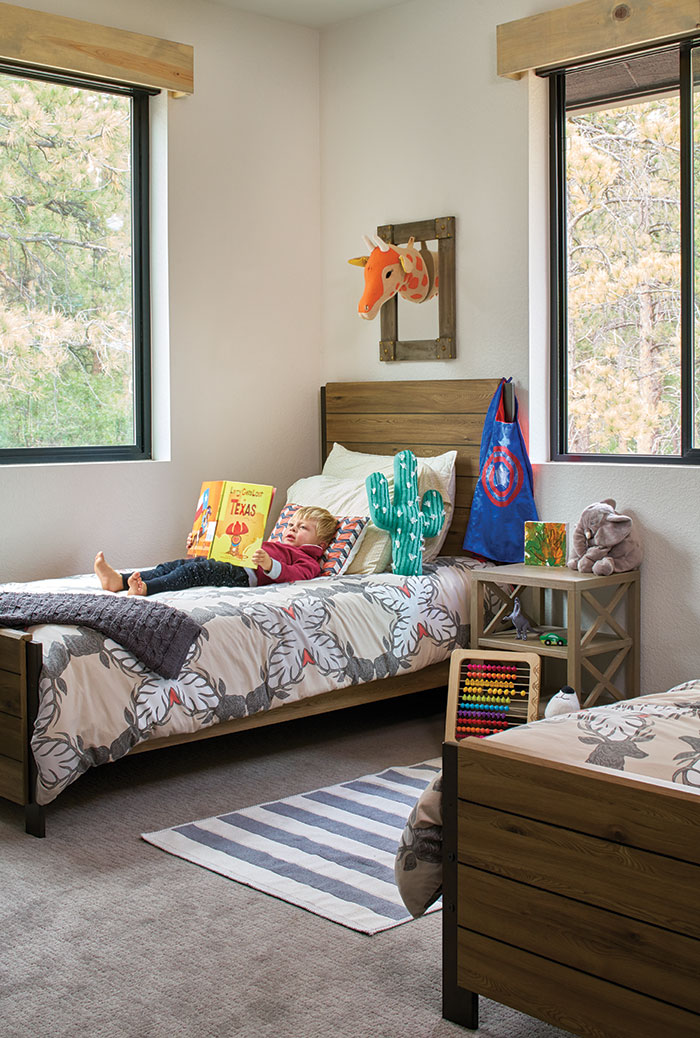 Ethan enjoys story time on his Overstock.com bed with bedding from West Elm; the plush giraffe mount and cactus pillow are from Target. 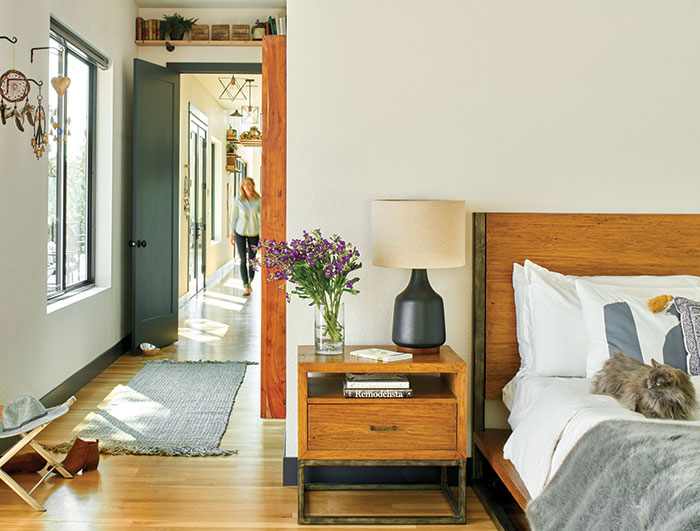 Tori, the family cat, lounges atop an industrial-meets-modern bed, which is flanked by matching nightstands and reading lamps, all from West Elm. 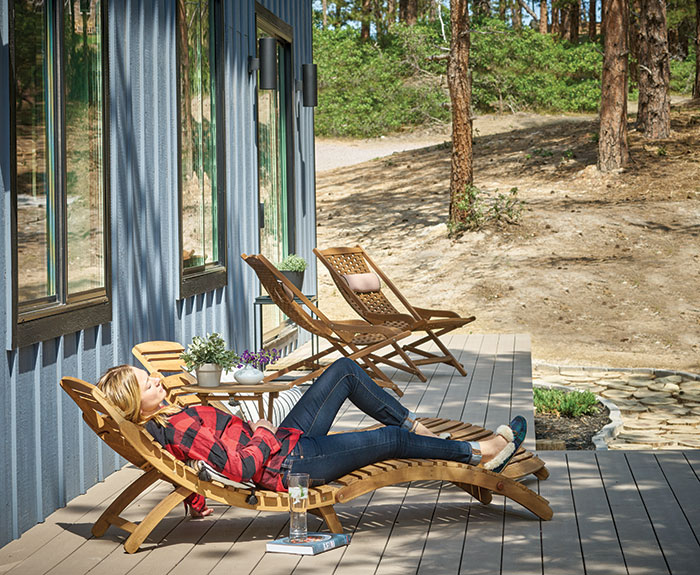 Nicole retreats to the wraparound porch outfitted with AllModern.com seating for a fleeting moment of well-deserved R&R.