From clutter and confusion to sophisticated and stylish 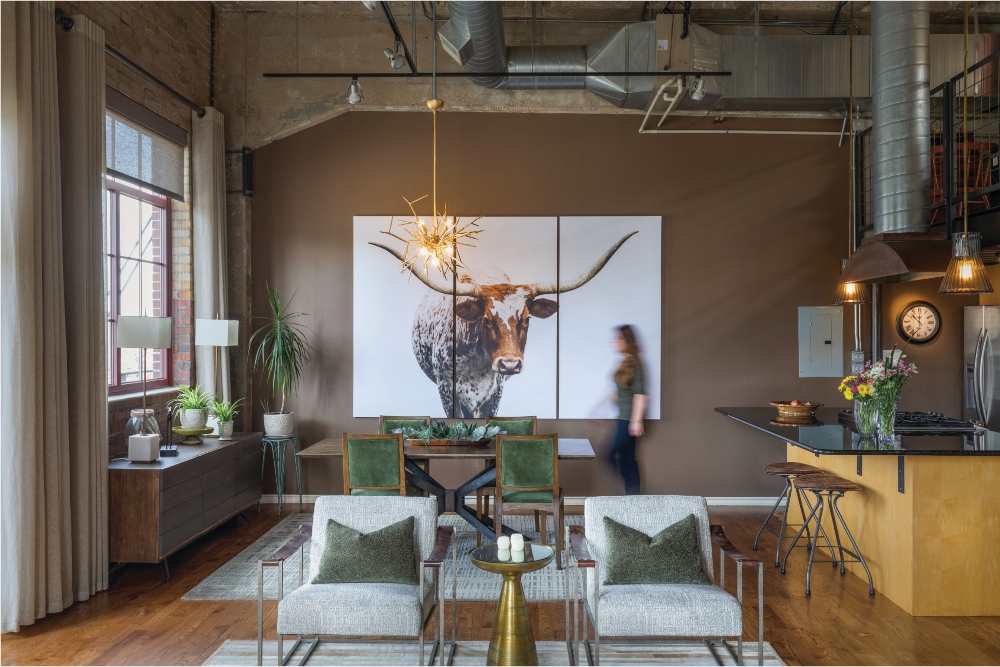 STARTING POINT: Designer Gina D’Amore Bauerle was tapped to reinvent this 1,690- square-foot Uptown Denver loft. There were plenty of assets to work with: brick walls, a steel mezzanine and an exposed concrete ceiling. But first Bauerle had to clear the canvas. “We had to eliminate clutter,” she says.

To that end, the designer helped the owners, a 40-something couple, embark on what she called “the purge”— getting rid of practically everything they owned, which resulted in multiple dumpsters filled with random house objects. The floor stain, formerly a light oak, was refurbished to Early American, a darker base for a more calming color palette. 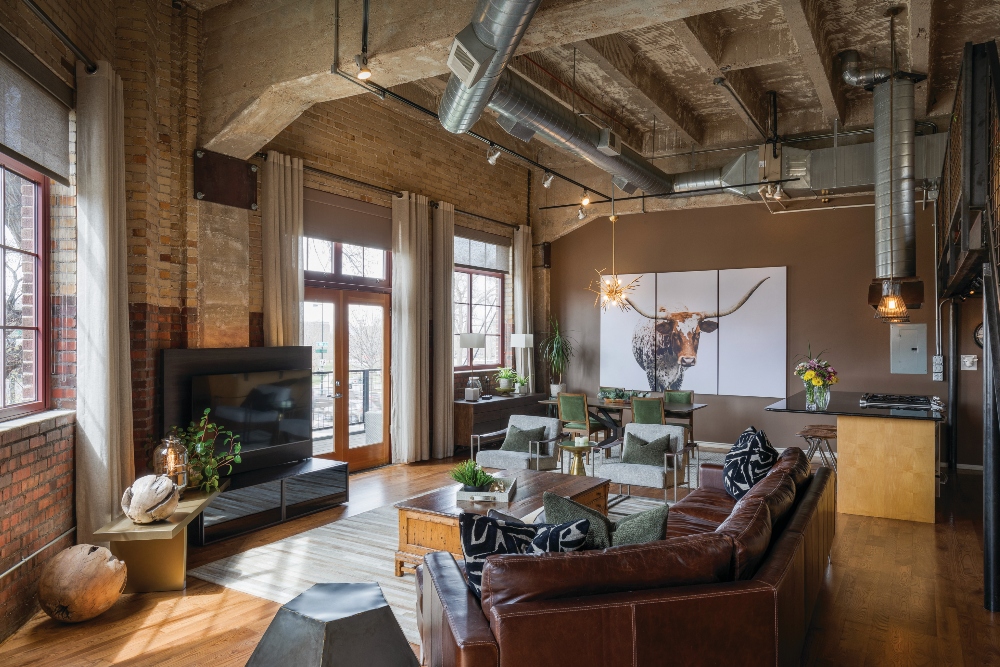 Living Room The cuddle-wedge shape at the end of the Oliver sectional by American Leather is virtually the exact same angle of that wall—the whole unit is a triangle. Decorative pillows by Massoud, Fabricut and Auskin cover the sectional, which stands on a Prairie Cowhide Patchwork rug from Nourison.

CHALLENGES: Bauerle’s toughest hurdle was the triangle shape of the unit. “The sectional is really cool because it has the cuddle-wedge piece on the end, and I swear to you, the angle of that sofa is the exact same angle of their unit,” she says. The sectional, along with all other furniture and light fixtures, was purchased from D’Amore Interiors. Bauerle selected furniture that would serve multiple functions.

For instance: A large, gold Arteriors armoire in the sitting room houses a TV and provides additional concealed storage, and an under-the-window bench can be moved for extra seating at the dining-room table. 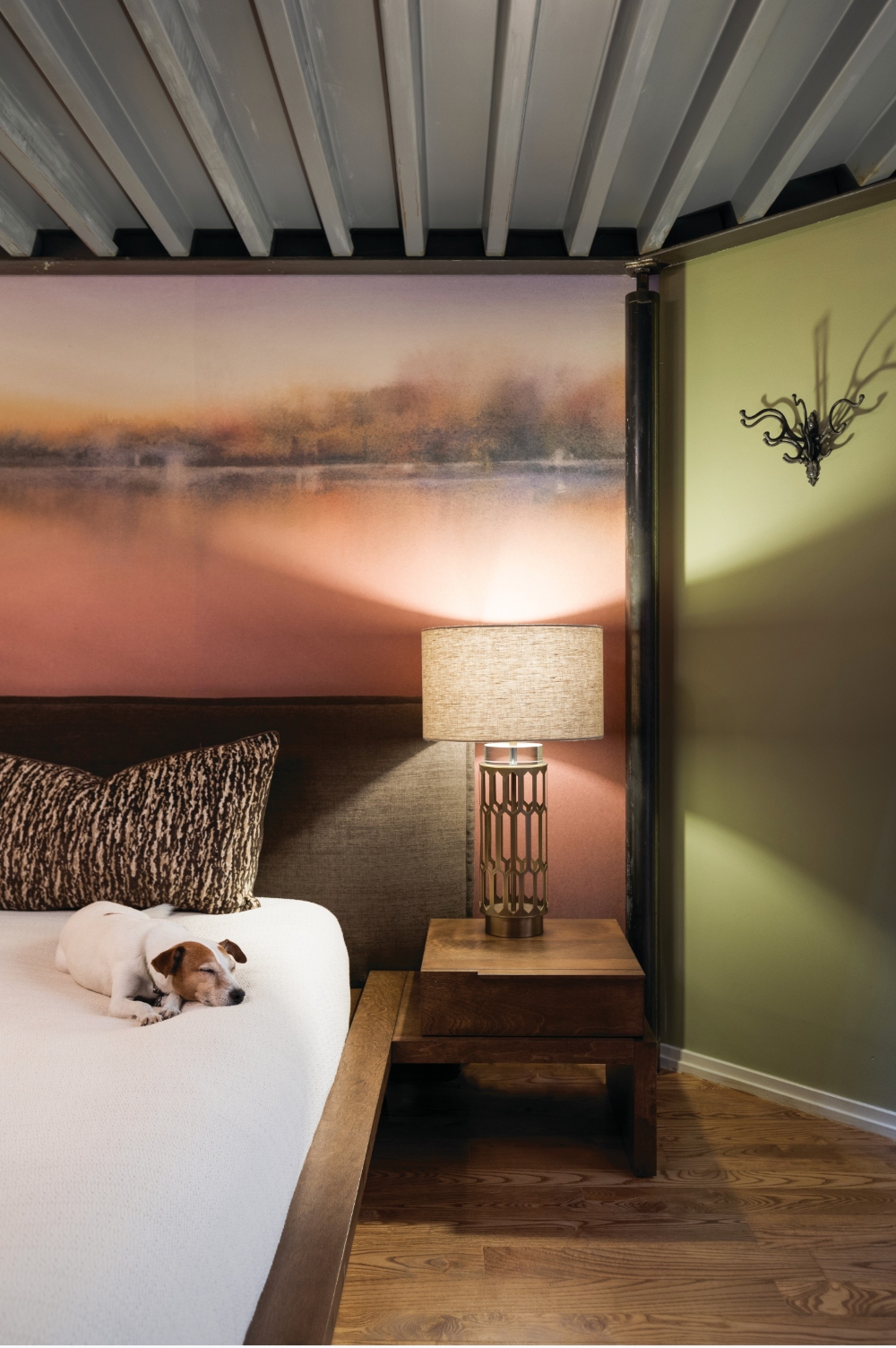 Scale in the bedroom was another design hurdle. “It’s a small room with a low, 7-foot ceiling,” Bauerle says. Her solution was to lower the bed, thus skewing the room’s proportions and making the ceiling seem taller. The wall mural helped proportionally as well. The orientation of its horizon line—two-thirds of the way up the image—fixed the imbalance, because the platform bed was in the lower, darker portion of the mural. The horizon above rested where a piece of art would normally be placed. 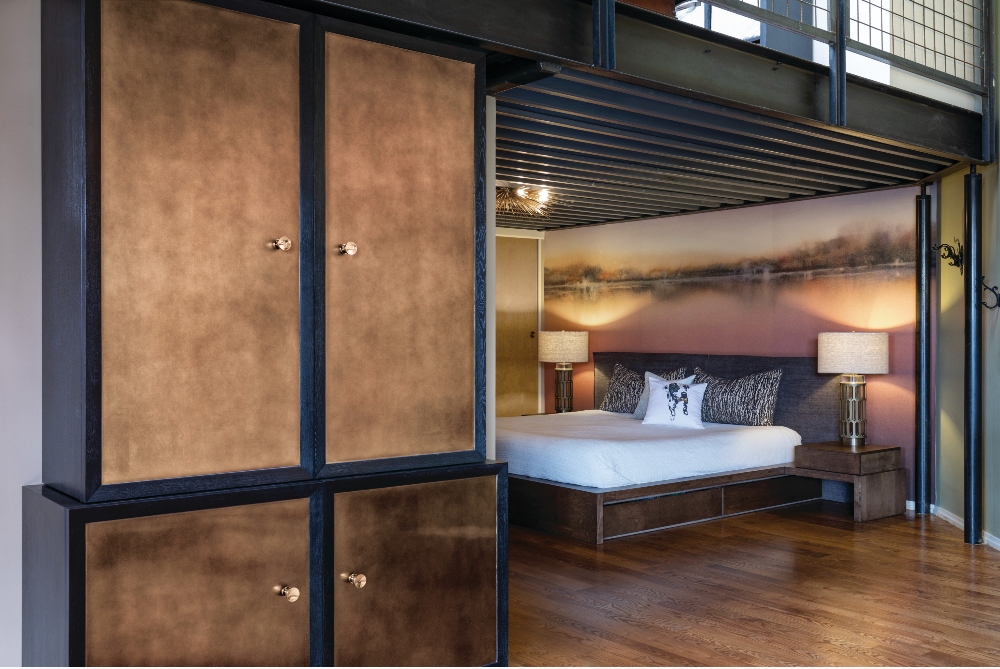 Bedroom Designer Gina D’Amore Bauerle lowered the bed and added a mural with an emphasized horizon line to give this room an illusion of space, despite a 7-foot ceiling.

EYE CANDY: “I love the massive longhorn bull,” Bauerle says. She felt the huge wall called for an overscale statement piece with personality. Inspiration came while at home watching Ferdinand, the cartoon about the bull, on TV with her young son. The loft’s bull—8 feet tall and 6 feet wide—serves as a feisty focal point. “It was something we picked at the end, and now I can’t imagine the loft without it,” she says. 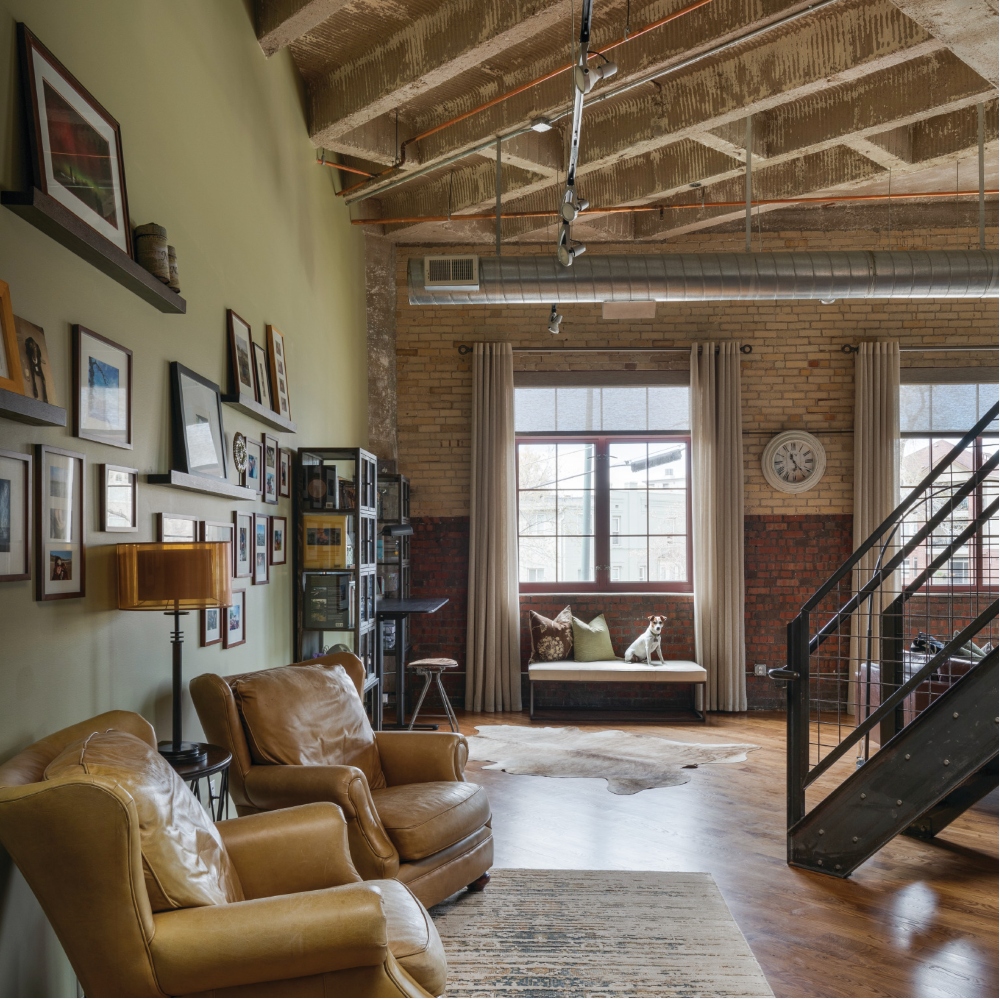 SATISFACTION: “It went from cluttered and mismatched to lofty elegance,” says the ecstatic homeowner. “Between the leather and the wood and the natural elements and everything she did, I am speechless. In my mind, you can’t compare the two. She transformed our space in a way that justified every choice.”