An Architect’s Modern Home in Evergreen 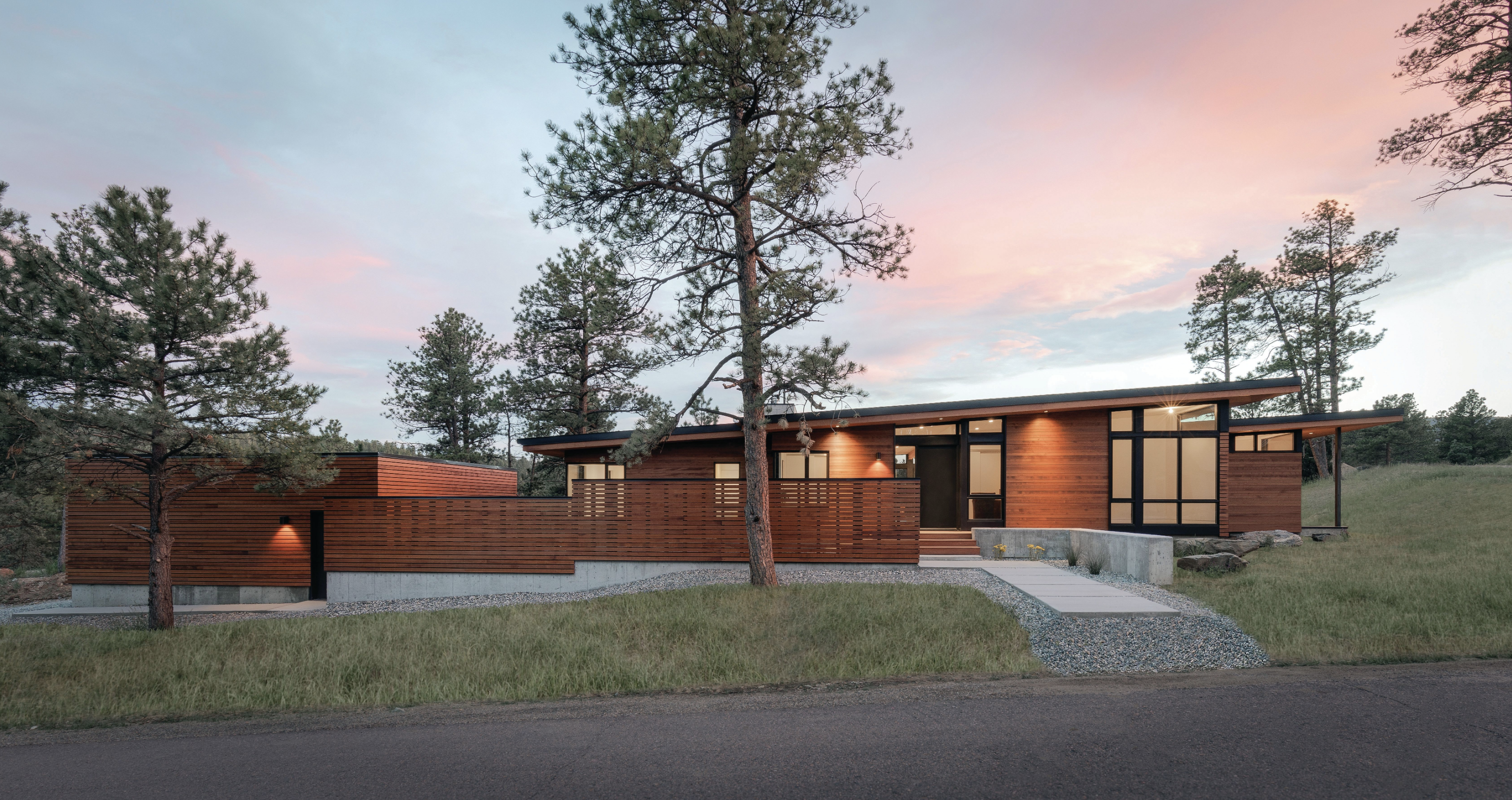 Exterior Privacy walls create multiple courtyards, which serve as intimate gathering spots and as opportunities for gardens that elk and deer won’t eat. “We have a real affinity for courtyard spaces,” architect and homeowner Tucker Johnson says. Photography by Timothy Gormley.

Tucker Johnson is fond of analogies. (“I think it sometimes drives my wife crazy,” he jokes.) So when explaining the creative strategy for his family’s Evergreen home, he likens it to designing a pair of jeans. “Jeans are all made from the same material. But what makes some brands more successful than others is the stitching and pocket design. We defined our house through those small, rich decisions.”

Indeed, the home’s layout is simple, the materials similar, and the forms consistent. It is humbly tucked into the hillside with a low, sloping profile that matches the grade of the land and doesn’t inhibit the neighbors’ views. Yet there are subtle, splendid details that make it pop, like metal detailing on the entryways, bronze-framed corner windows, and the juxtaposition of traditional tongue-in-groove hemlock siding and open-slatted rain screen.

The basic, clean design of the home aligns with the Johnsons’ modernist aesthetic, sure, but it was also a necessity out of budgetary restrictions. “We had to sacrifice some things,” Johnson says. “At the same time, those limiting factors helped us finalize our design choices.” Johnson spent most of his career as a commercial architect; his own home is the first residential project he’d ever designed.

Like most architects worth their salt, he began with the land itself, working backward to create a form that fit its surroundings. “We wanted to respond to the natural shape of the site itself,” Johnson said via Zoom call from his office near Evergreen Lake. (An avid mountain biker, he rides the Dedisse and Three Sisters trails after work as often as he can.)

“It’s a modern mountain home that feels like a flat.” — Architect and Homeowner Tucker Johnson

Next, he designed a layout that would serve his family. He wanted an open floor plan that would still allow separation between him and his wife, Hannah, who works as a physical therapist, and their two kids, Evelyn, 3, and Rhett, 5. He created two wings that are connected by an open kitchen, living room and dining room, positioning the master wing facing east, so the sun comes into their bedroom as it rises over the mountains. “We can look out on the mountains when we’re lying in bed,” Johnson says.

The bedrooms are small (“designed for sleeping”), the ranch style easy to navigate, and every inch of the home thoughtful and lived-in. “It’s a modern mountain home that feels like a flat.”

Outside, Johnson inserted a courtyard between the detached garage and the house for privacy and built a seat wall so he and his wife could hang out with a glass of wine and watch the kids ride their bikes up and down the street. A storage area under the deck offers easy access to mountain bikes, camping gear and other Colorado toys. “It’s built for us—for how we see life.”

Johnson enjoyed designing his own home so much that his firm, Tucker Johnson Architects, is branching into other residential projects. “The type of architecture you see here is what we want to continue to work in,” he says. Then, using another analogy, he continues, “We’re trying to be a restaurant that focuses on making a specific type of food really well, as opposed to having a menu that has a little bit of everything.” 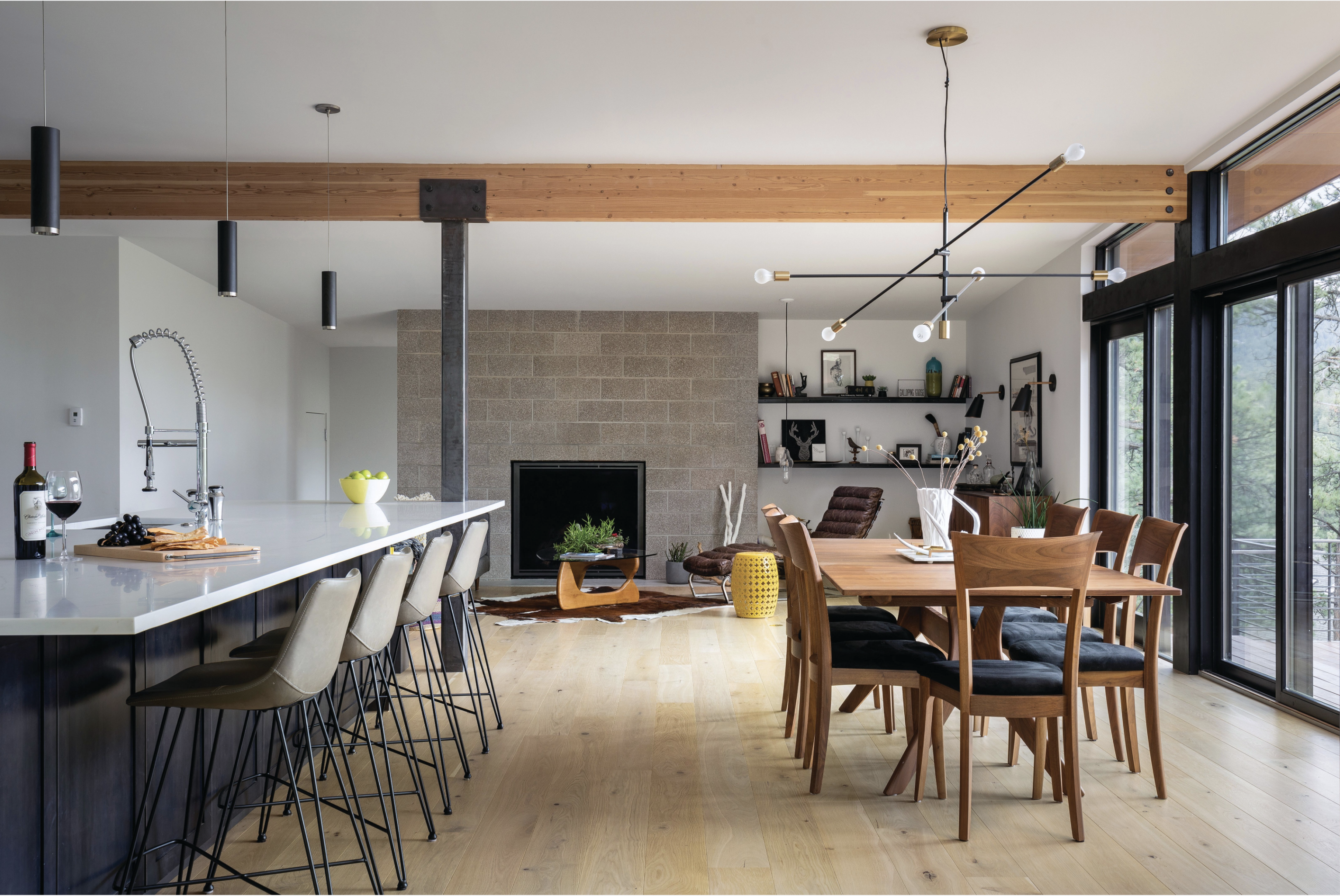 Great Room “When you’re standing in our living space, you can see 75 percent of the house,” Johnson says of the open fireplace room, dining room and family room (behind the camera in this photo). The European white-oak floors from Rock Solid Surfacing add warmth to the industrial steel beams and CMU (concrete masonry unit) block fireplace. “I used this masonry on a commercial project and liked the way the pink in it plays off the wood,” Johnson says. The chandelier is from West Elm, and the dining table and chairs are by Copeland. “I’m a big fan of Copeland,” Johnson says. 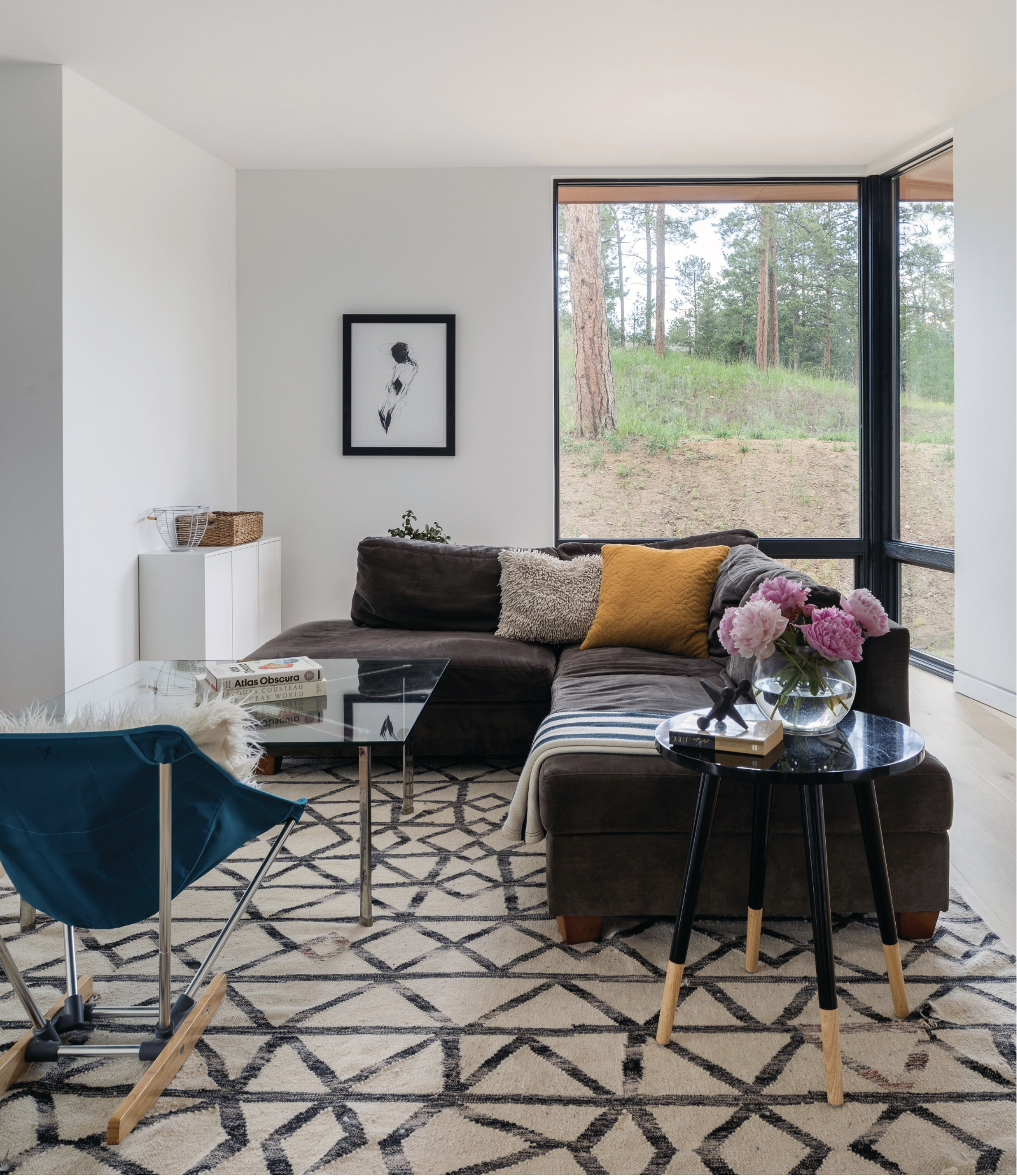 Family Room The Johnsons designed this family alcove at the end of the living room/dining room to create an intimate gathering spot in an otherwise open space. The home centers around the central living area: “The bedrooms are all small, designed for sleeping,” Johnson says. “We spend most of our time in the living spaces.” Large corner windows that look out to the mountain ranges bring the outside in; the views are the focal point of every room. 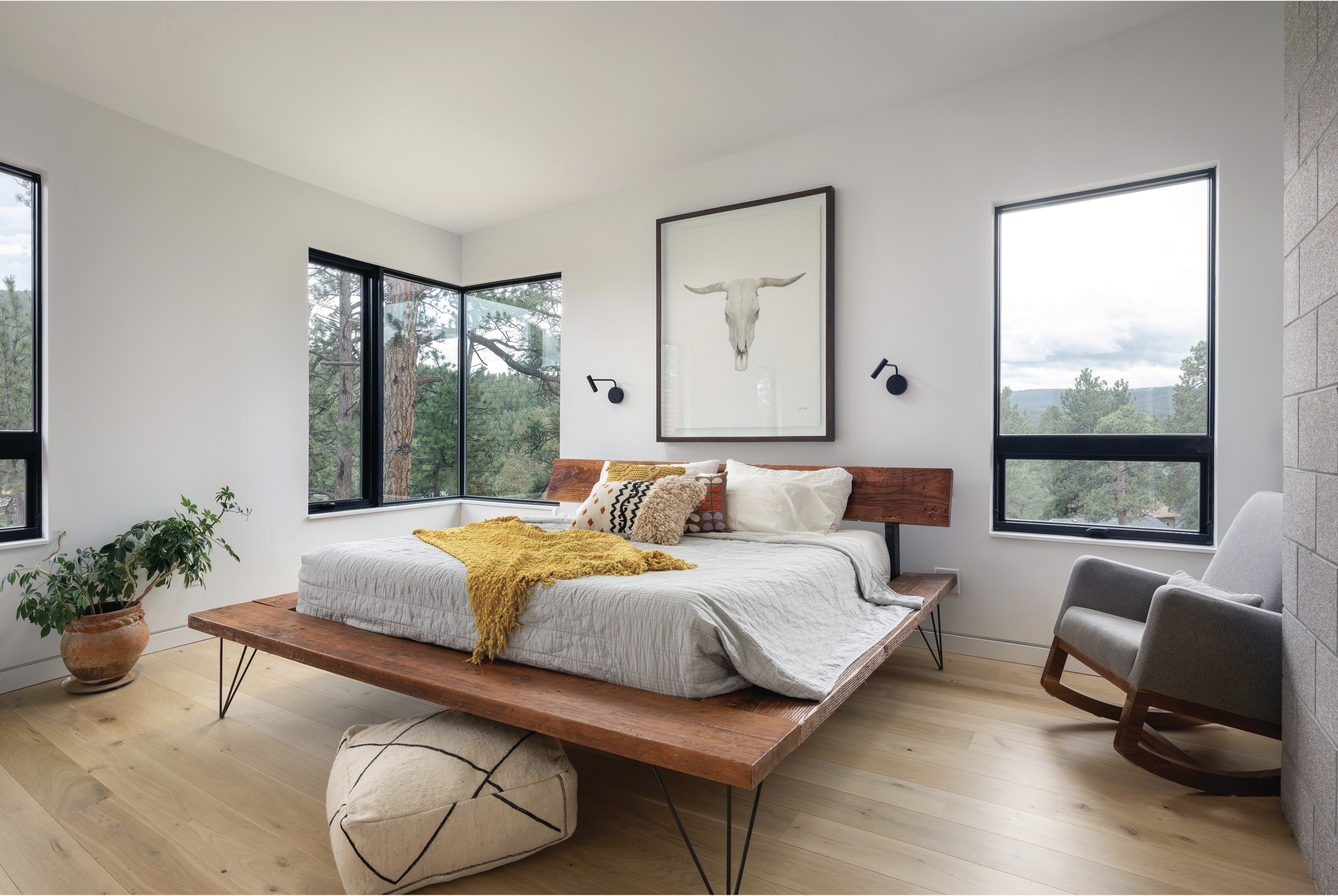 Master Bedroom A three-step transition separates the master bed and bath from the main level, which both helps the home meld into the landscape and offers a partition in the otherwise open home. “We love our kids, but we want a little separation,” Johnson says, laughing. “So we built the master on one side, the kids’ rooms on the other and the living space in the middle.” The sun rises into the master windows and wraps its way around the house throughout the day. The bed is a Railhouse Platform Bed from Croft House in Los Angeles, which merges modern with rustic. 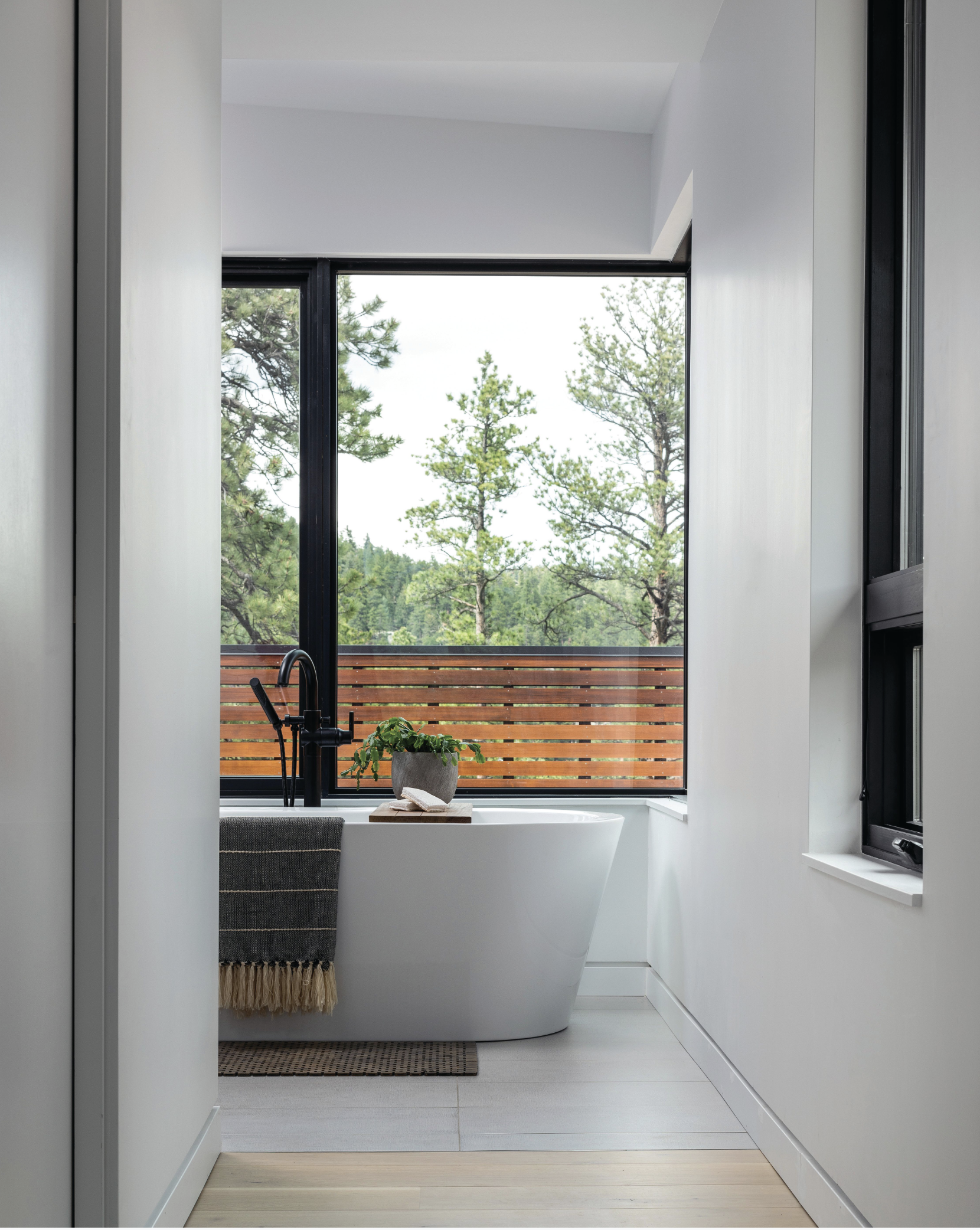 Master Bathroom Clean, simple and considerate is the Johnsons’ modus operandi. The master bath is all-white, with richly stained alder-wood Vogo cabinets grounding the space. Outside the windows, the hemlock garage and courtyard fencing provides both privacy and a cozy feel. The Celeste free-standing soaking tub is from Jacuzzi. The Johnsons carefully chose everything in the home from a budgetary standpoint, proving Johnson’s philosophy that “good design adds value faster than cost.” 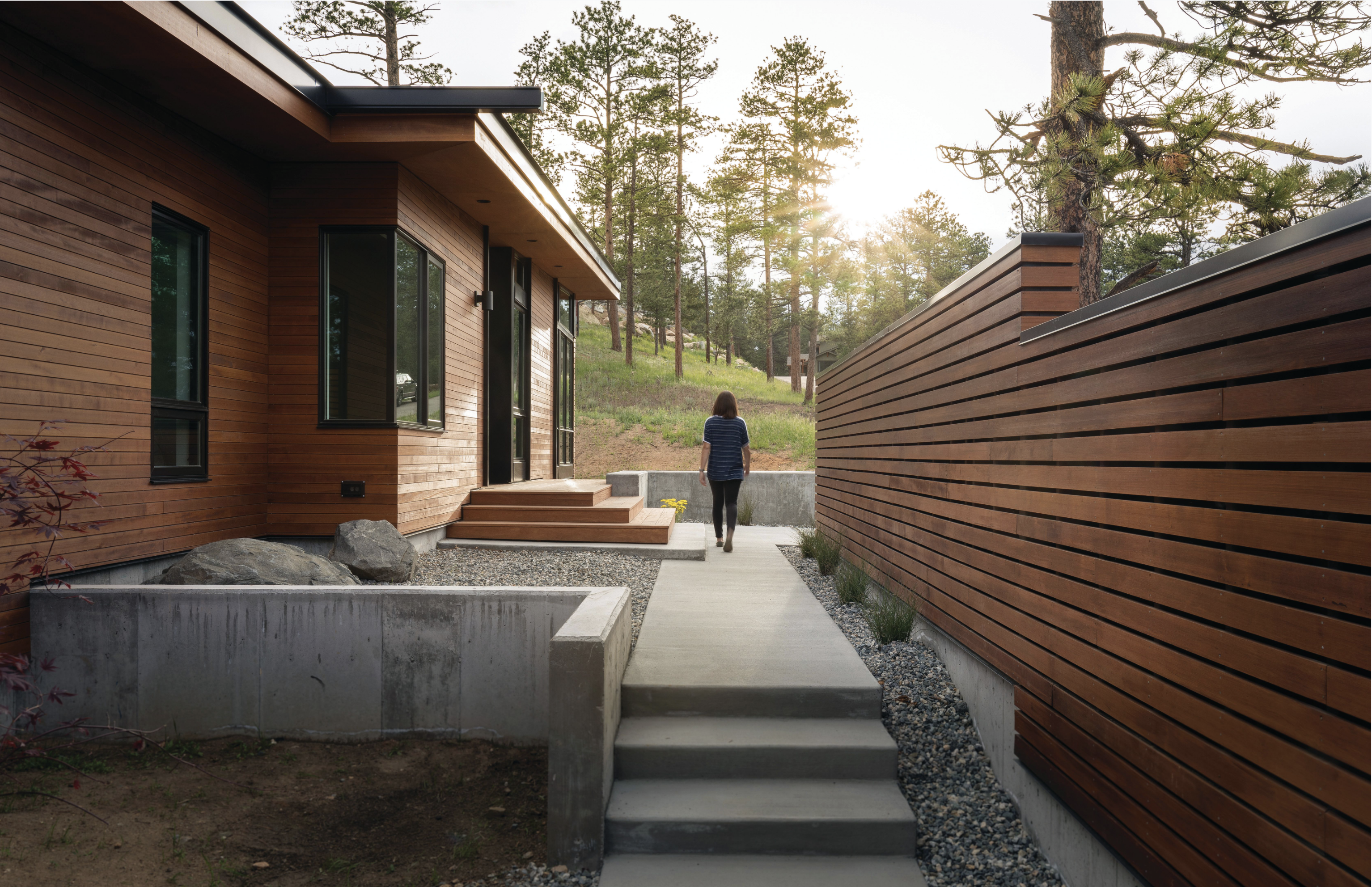 Exterior Large roof overhangs, low ceilings and the use of concrete provide for an energyefficient design. Windows on both sides of the house are optimized for cross-ventilation, so there’s no need for a cooling system. Radiant heat in the floors works efficiently in winter. “The house holds its temperature really well,” Johnson says. 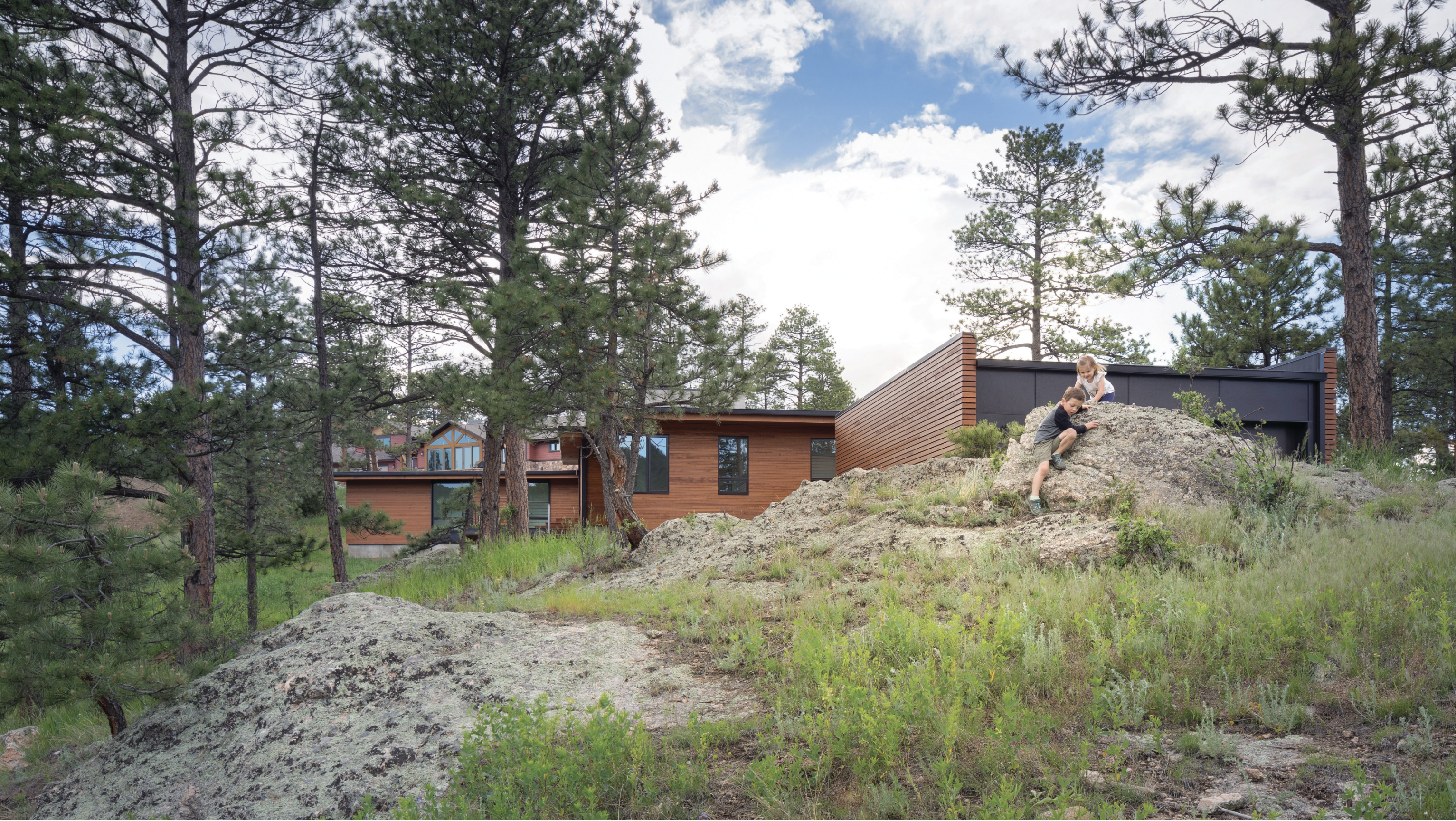 Rear Exterior The Johnsons had their first child up in Evergreen, while living in a home that Hannah had owned when they met. Eventually, they moved down to Denver for a couple of years, but by the time their second child was born, they decided Evergreen was the community where they wanted to raise their kids. “We wanted to come back for the lifestyle of it all,” Johnson says. “We decided to build and to make the whole dream happen, so we opened the office up here and made a full investment in this area.” When they first looked at land, they saw this rock outcrop and positioned the house respectfully around it, because “it was just meant for the kids to have fun on.”