An Architect Walks into a Coffee Bar…

A dream collaboration transforms a kind-of-dark, kind-of-small Boulder ranch into some kind of wonderful

It’s impossible to look at this light-filled Boulder home and imagine it as the classic (read: a little squat, a little dark) 1950s ranch house Cara and Vajra Rich moved into in 2009. The multitalented Riches—she’s a musician and artist, and he makes fine furniture—are better known around Boulder and Denver as co-owners of Boxcar Coffee Roasters. Architect David Barrett’s studio shares a neighborhood with Boxcar, and the couple and the architect became friends over coffee long before the renovation began.

“It all started when Cara decided she’d like a little more light in the living room,” recalls Barrett, describing the modest beginning of a project that morphed into this pop-the-top remodel that doubled the house’s floor space (1,010 square feet to 2,020 square feet), while opening every corner of the home to the Colorado sunshine. “At first it was just taking off the back porch and putting in a bunch of windows,” says Cara. “Vajra and I had thought about a big renovation, playing with ideas of what we’d do if we redid the whole place, but it just wasn’t the time.” And then the couple received a generous gift from Cara’s grandfather. “We’d just been kicking ideas around with David—whom we love—and then we received this gift, and it all fell into place.”

The architects and the clients were determined not to fall into the classic pop-top trap. “We are very sensitive about pop-tops because there are so many bad examples around, where the second floor looks like a new hat that doesn’t fit; the building looks top-heavy,” says Barrett. Raising the brick trim line along the front of the house helped keep the new top and existing bottom in proportion. “Cara and her mom’s idea,” says Barrett. “The higher windows on the street side give some privacy, and they let in the east light, that early morning, wake-you-up light. In the evening, the light from inside emanates outside to the street, a glow reflecting off the wood of the outdoor soffit. It’s like the house becomes a lantern.” 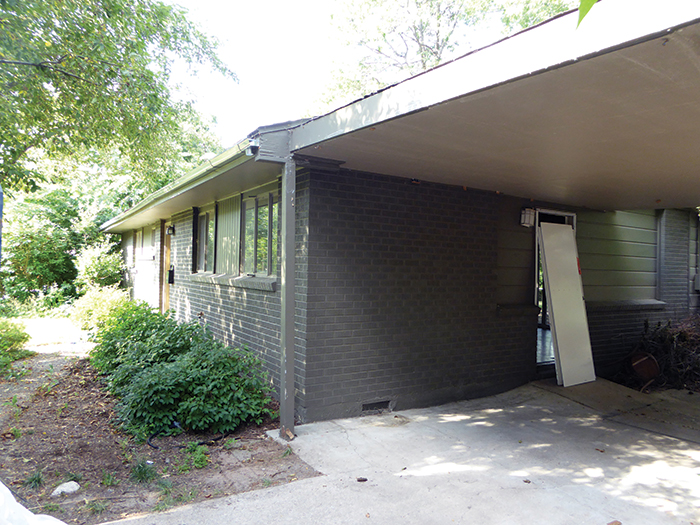 “When there’s joy in the making, shared creativity, people welcomed into the process, that feeling stays with a house.” — Architect David Barrett 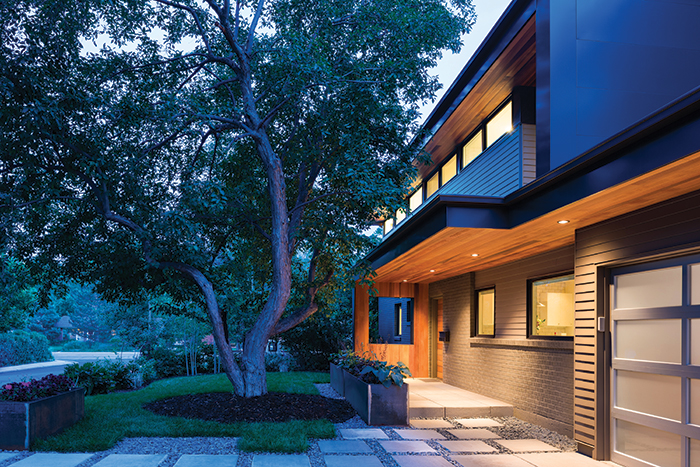 “The lot had such great mature trees,” says project architect Richard Keilman. “They were built-in sun control as long as we didn’t damage them. We designed the deck out back around them and were careful to build supports that wouldn’t harm the major root systems.”

“Almost all the unique details, like the façade and the kitchen island and the fireplace, were developed in collaboration,” says project architect Richard Keilman. “Someone had an idea, then two or three other people chimed in, and we eventually came up with a solution that everyone contributed to. It was pretty incredible.” 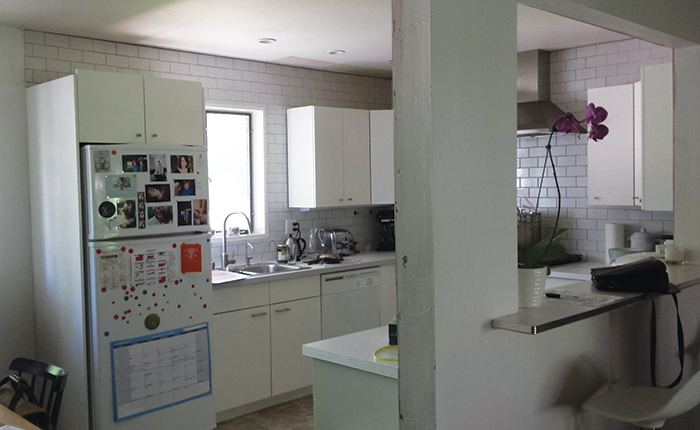 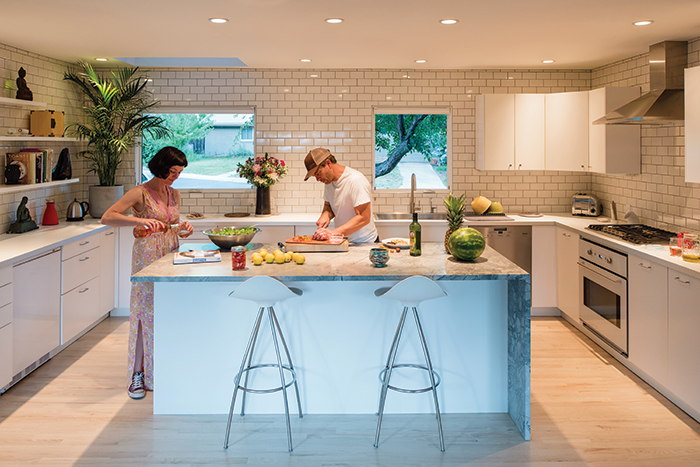 Previously, the downstairs was chopped up into the typical kitchen/dining room/living room spaces. Removing the walls brought light from the west into the east-facing kitchen. The white tiled walls and appliances and cabinetry provide a cool contrast to the warm oak floors. “That’s the yin and yang—warm flooring, cool granite on the island,” says architect David Barrett. “That back-and-forth between warm and cool tones brings a certain balance and rightness to a place.”

“You hear so many nightmares about builders,” says Cara, “but David is a brilliant artist, and Rich and Ryan (Wither, the builder) and the craftspeople they worked with cared so much about beauty and the place. I feel like these are some of the coolest guys I ever met.”

Through the year of the remodel, Cara, Vajra, daughter Stella Rose and dog Banjo relocated to a one-bedroom apartment. “I wouldn’t recommend it,” laughs Cara. Moving back from those tight quarters into the newly sun-filled, spacious house was “surreal.” she says. “It was wild. Even though we were involved through the whole process, Vajra and I were having trouble believing we get to live in a house this beautiful. When we moved back, it felt that a lot of love had been put into this project, and the beauty resulting from a collaboration of so many is something really special about the house.”

Barrett agrees: “It may be old Boulder hippie talk, but I think when you hear horror stories about architect and builder and owner, you can almost feel that funk in the building. When the opposite is there—when there’s joy in the making, shared creativity, people welcomed into the process—that feeling stays with a house.” 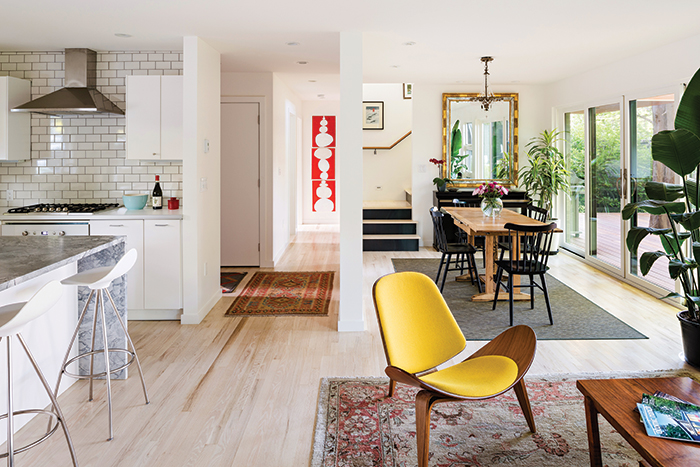 The yellow Hans Wegner chair is “a design that Vajra, a furniture designer, has always admired because it’s so simple and classic,” says homeowner Cara Rich of her husband. “And it’s so comfortable.” The striking bubble triptych at the end of the hallway was painted by Cara. “I’m a musician,” she says, “but I’ve always done art and loved doing it. I painted these and thought, ‘I kind of like them!’ So we put them up.” 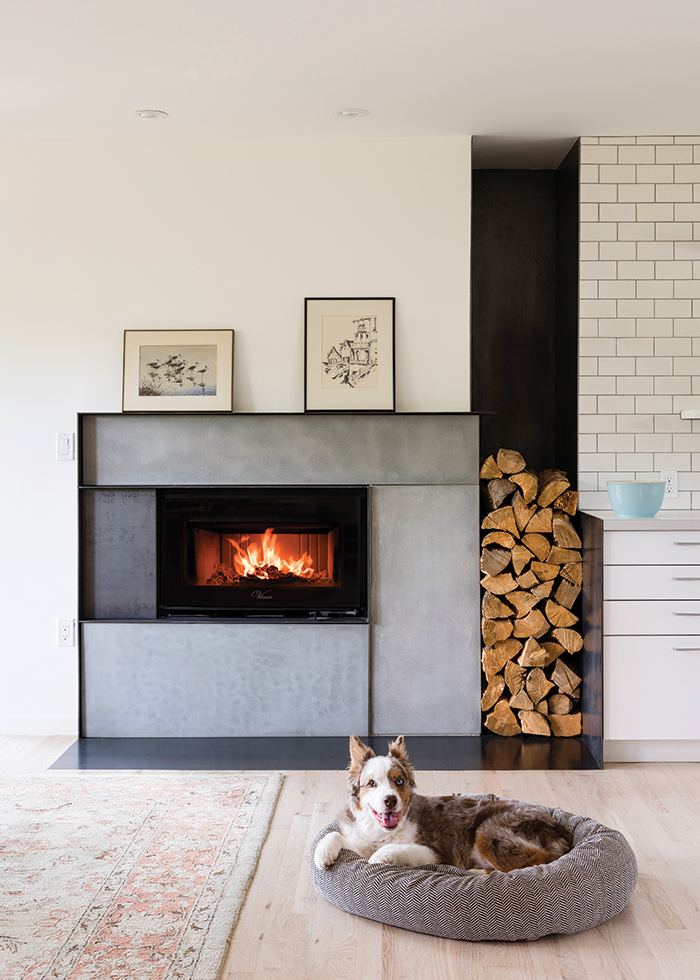 “The fireplace is really an art piece,” says Barrett. He credits Vajra with designing something that is elegant and functional and light enough not to require additional costly structural supports. The calming gray surround is constructed of thin concrete panels set at slightly different depths. “The vertical wood box (Vajra really wanted a space for wood storage handy to the fireplace) is lined with thin plate steel—light enough to be manipulated into the space yet bombproof, so you can just toss the wood in there and not worry about it,” says Barrett. The family dog, Banjo, happily curls up whenever a fire is roaring. 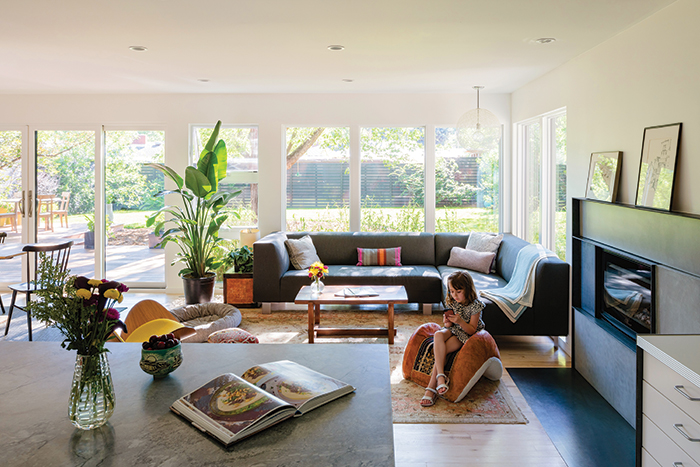 The Riches’ niece (the photographer’s daughter) relaxes on an antique saddle chair. “That was my grandfather’s saddle. He brought it back from Africa years and years ago,” says Cara. 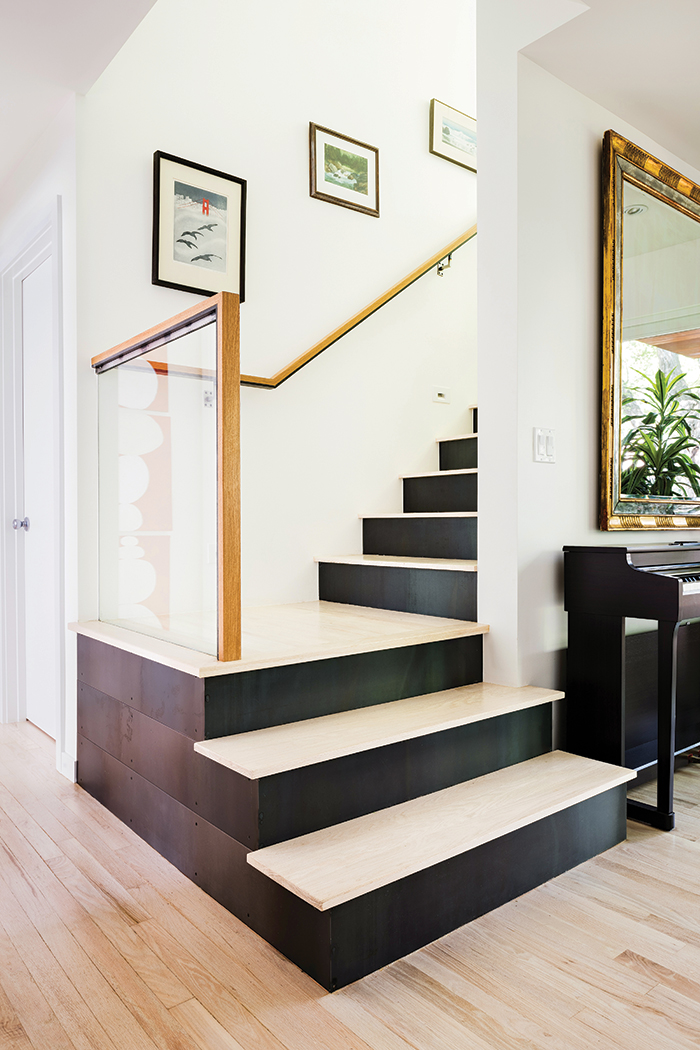 “When you stand on the landing, it feels as if you’re suspended outside the house,” says homeowner Cara Rich. 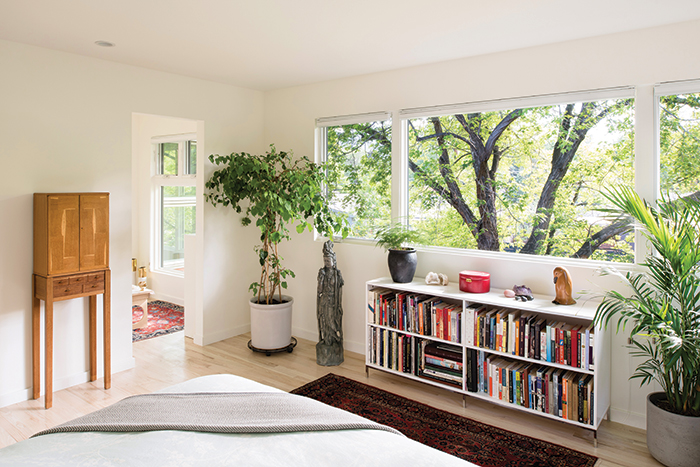 “We lived here for seven years, but we really never realized what trees we had until the renovation,” says Cara. “The whole upstairs has a tree house feeling.” The delicate, long-legged wooden cabinet is Vajra’s work. 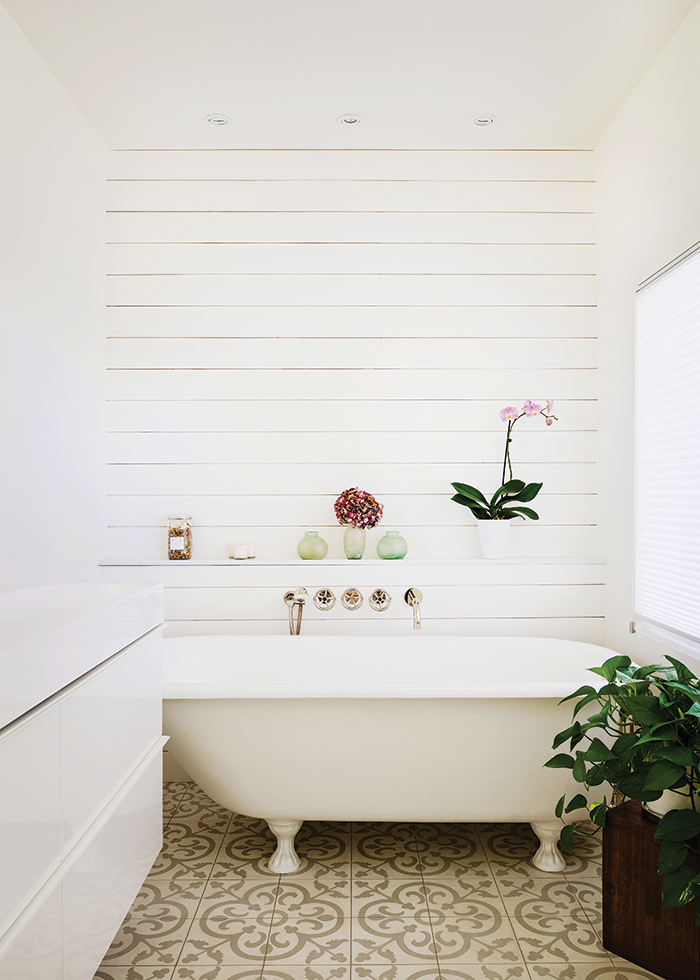 The blue-gray patterned floor tile was a bit of a splurge, but the serene bathroom with its white walls and clawfoot tub came in well within budget. “We didn’t have an unlimited budget, so we economized with Ikea cabinets in the bathroom, hollow-core doors and Home Depot knobs, so that we could spend on design details like the fireplace and the stairs,” says Cara.