A Traditional Home With a Modern Twist

To transform the home for a family with a modernist bent, a Denver design duo first heeded the needs of the home itself 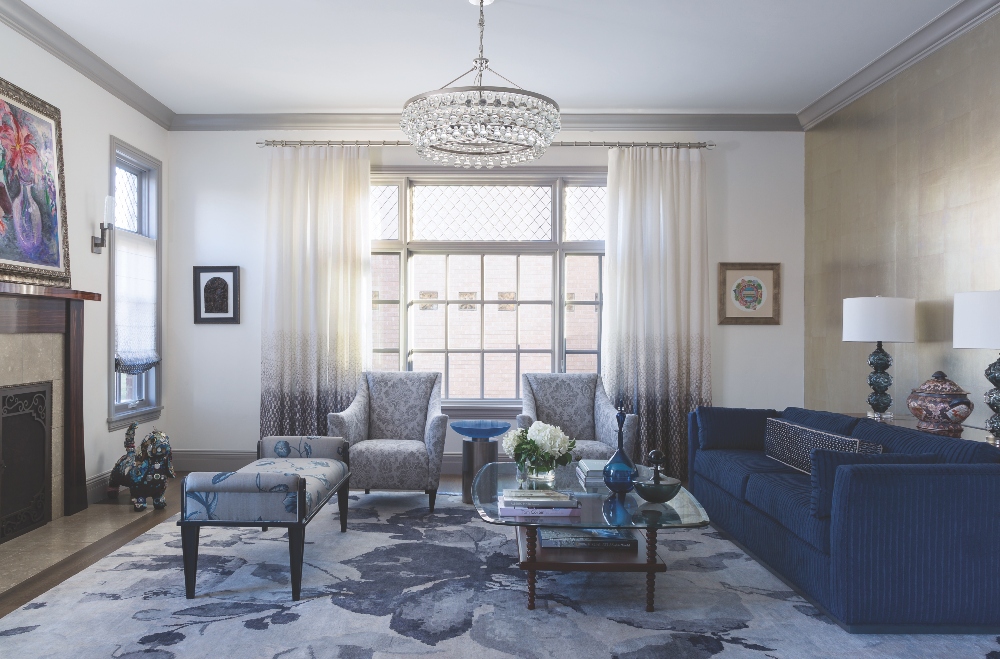 Every house, from a flirtatious Victorian to a stoic Denver square, has its own voice. And when it comes to remodeling one, it takes a good listener to do it right. When tasked with remodeling a traditional home in Denver’s Crestmoor neighborhood for a family who leans toward the avant-garde, Kristi Dinner and Susan Schwab—founding principal designers for Company KD—were all ears, indeed. Like gracious hosts at a cocktail party making the right introductions among an eclectic crowd, they found the common ground.“The house was not their style,” Dinner says. “They came from a contemporary new-build in Hilltop, but when they walked in, it somehow felt right.”

The family chose to relocate because, as devout Jews, they wanted a home close enough to their synagogue that they and their three teenage daughters could walk to services on Saturday. (The laws of the Sabbath prohibit driving in a vehicle from sundown on Friday until sundown on Saturday.) To that end, they were also looking for a home where they could incorporate a kosher kitchen, which requires separate areas for storing and cooking meat and milk products. “We looked for two years,” says the homeowner, dressed casually in jeans, sneakers and a cozy, gray sweater. “When we found this house, we knew it was meant to be.”

At first the owners weren’t sure how much remodeling they would do, because they wanted to preserve the bones of the 13-year-old home, so Dinner and Schwab presented them with a three-tiered design plan. “We gave them options of good, better and best,” Dinner says. “The client had ideas of what they wanted, but the house speaks too, and they wanted to listen to that. So we opted to make it more transitional, to go toward modern yet honor the home by keeping things like the molding and leaded-glass windows. We wanted it to feel warm, sophisticated and elegant.” To create a bridge between old and new, they replaced the existing dark, heavy Brazilian cherry floor and cabinets and chose new, modern furnishings, while also incorporating much of the couple’s pieces from their previous home. They retained the original sweeping staircase in the entryway, but updated it by painting the stairs gray and handrails black. They also added clean-lined, built-in shelves in nearly every room in the home, which feel like an organic part of the house, while tying in the contemporary furnishings and light fixtures. In the dining room, they added a traditional window seat under original leaded-glass windows and chose throw pillows with metallic accents to match the new wallpaper.

Another issue was that the new home’s rooms were more defined than the owners’ previous open, airy spaces, so Dinner and Schwab wove similar threads—like a gray paint palette and warm metallics—throughout the home to bring it all together. “We chose clean lines for everything and emphasized unique lighting fixtures throughout,” Dinner says. In the kitchen, they needed a big island that would accommodate casual dining for their family of five and serve as a staging space for holiday entertaining, but they also didn’t like the look of a huge, cold slab of stone. “We felt like we needed a division for working and eating,” Schwab says. They worked with Exquisite Kitchen Design (EKD) to create an acrylic resin that sits on top of the quartz to visually delineate the space and lend a warmth to the cold stone. “A lot of what we do is problem-solve,” Dinner says. “And in the end, it wound up working better than if we had been involved with building the home from the beginning.”

Both Dinner and Schwab credit their partners EKD and Cadre General Contractors for much of the success of the project. “We all worked so well together. We had meetings at the house every Thursday. We all became part of the family,” Dinner says. “Now that it’s finished, we all kind of miss each other.” 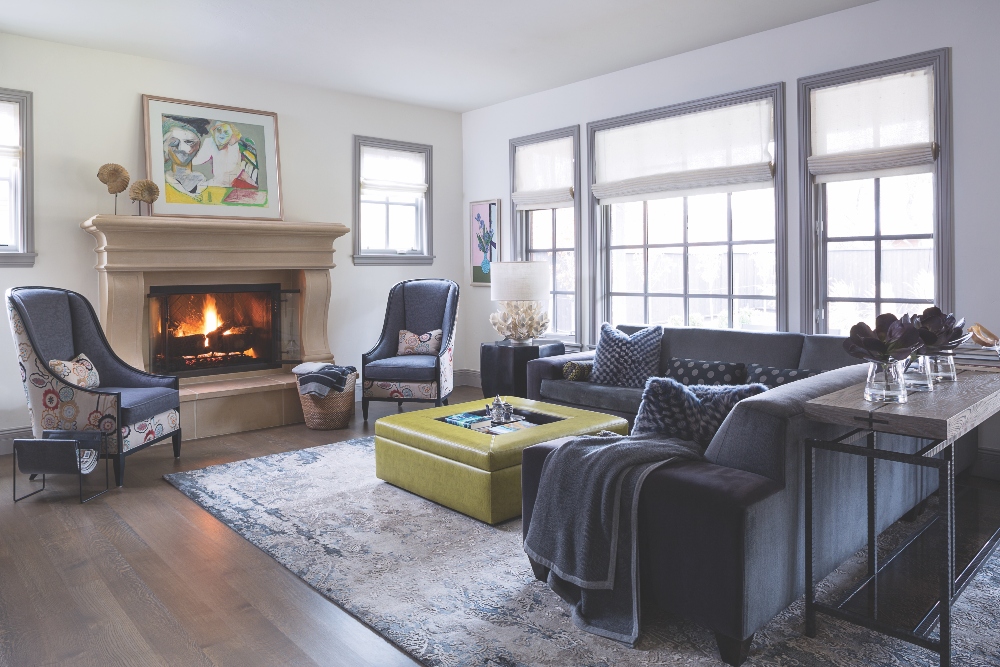 Family Room “Throughout the home, we worked in a palette of moody blues,” Dinner says. In the family room, which opens into the kitchen, they chose blue hues that are more grayed out. The Jefferson side chairs from Century Furniture are upholstered in Casamance Insomnie fabric on the inside and Harlequin Edin Coral/Sapphire on the outside. Company KD had made the sectional sofa and chartreuse coffee table/ottoman, which is soft on the perimeter for resting tired feet, for the owners’ previous home. 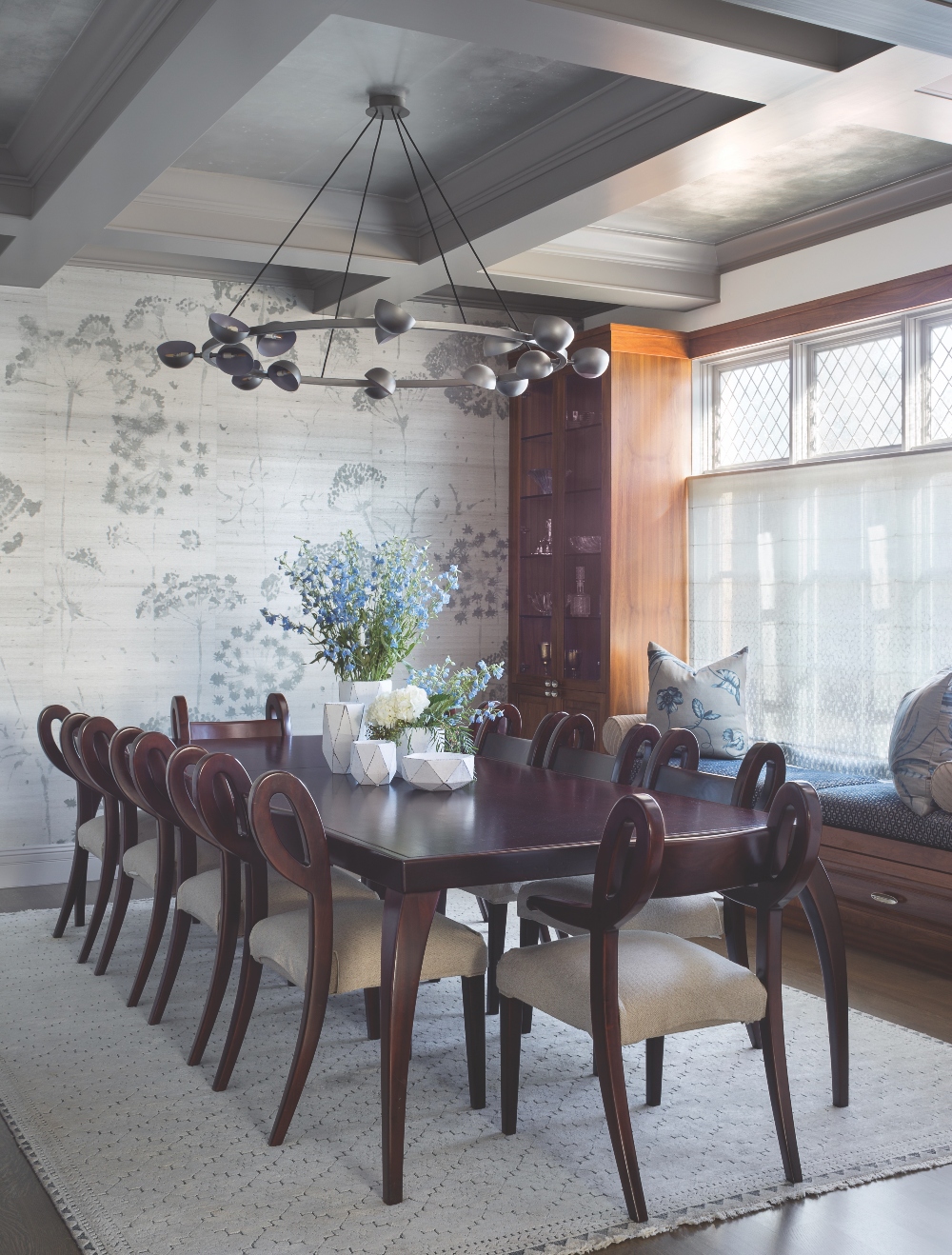 Dining Room Using the homeowners’ existing dining table and chairs and the original leaded glass as the starting point, Dinner and Schwab added a built-in window seat and shelves that look like they could have come with the house. “They really warm up the room and give it a cozy feel,” Schwab says. They wallpapered the ceiling with a timeless Oxidized Leaf paper and walls with Wish Metallic Whim on Silver Silk, both by Phillip Jeffries. Throughout the home, Dinner and Schwab emphasized light fixtures, using them as an opportunity to make an artistic statement. “It just sets the tone for the home,” Dinner says. The light fixture is a Jonathan Browning Avion Round chandelier from Town Studios. 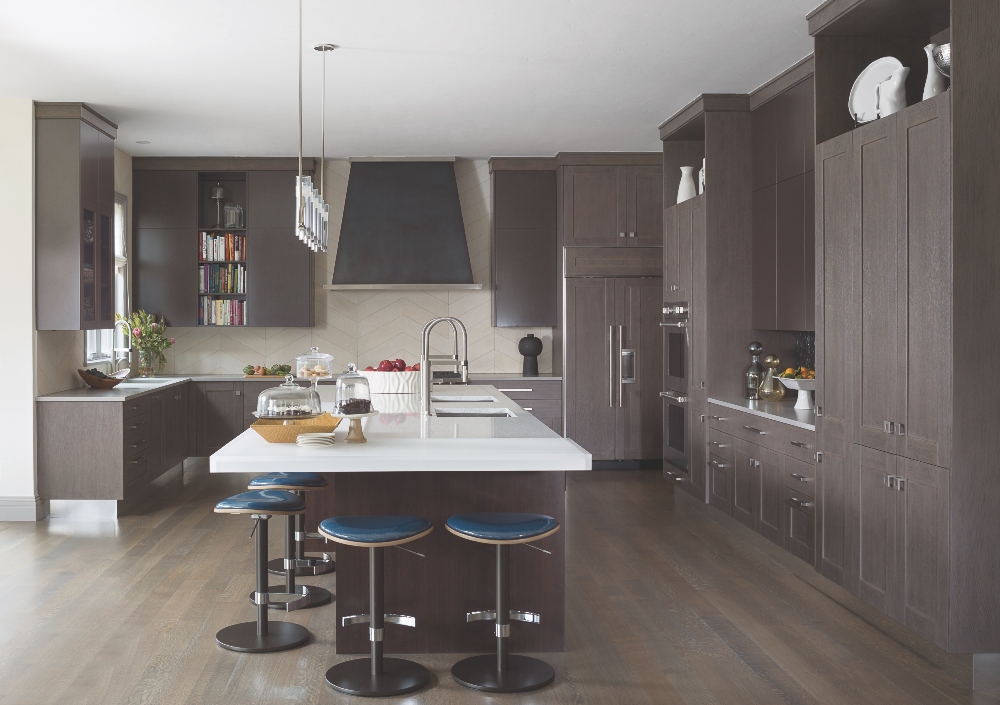 Kitchen An extra-long island accommodates five stools and serves as a staging space for holiday entertaining. To delineate the eating counter from the rest of the Cambria Whitney Jewel quartz counter, EKD designed an acrylic resin that feels warmer to the touch and adds visual interest to the monochromatic slab. The Jonathan Browning light fixture is from Town Studios. 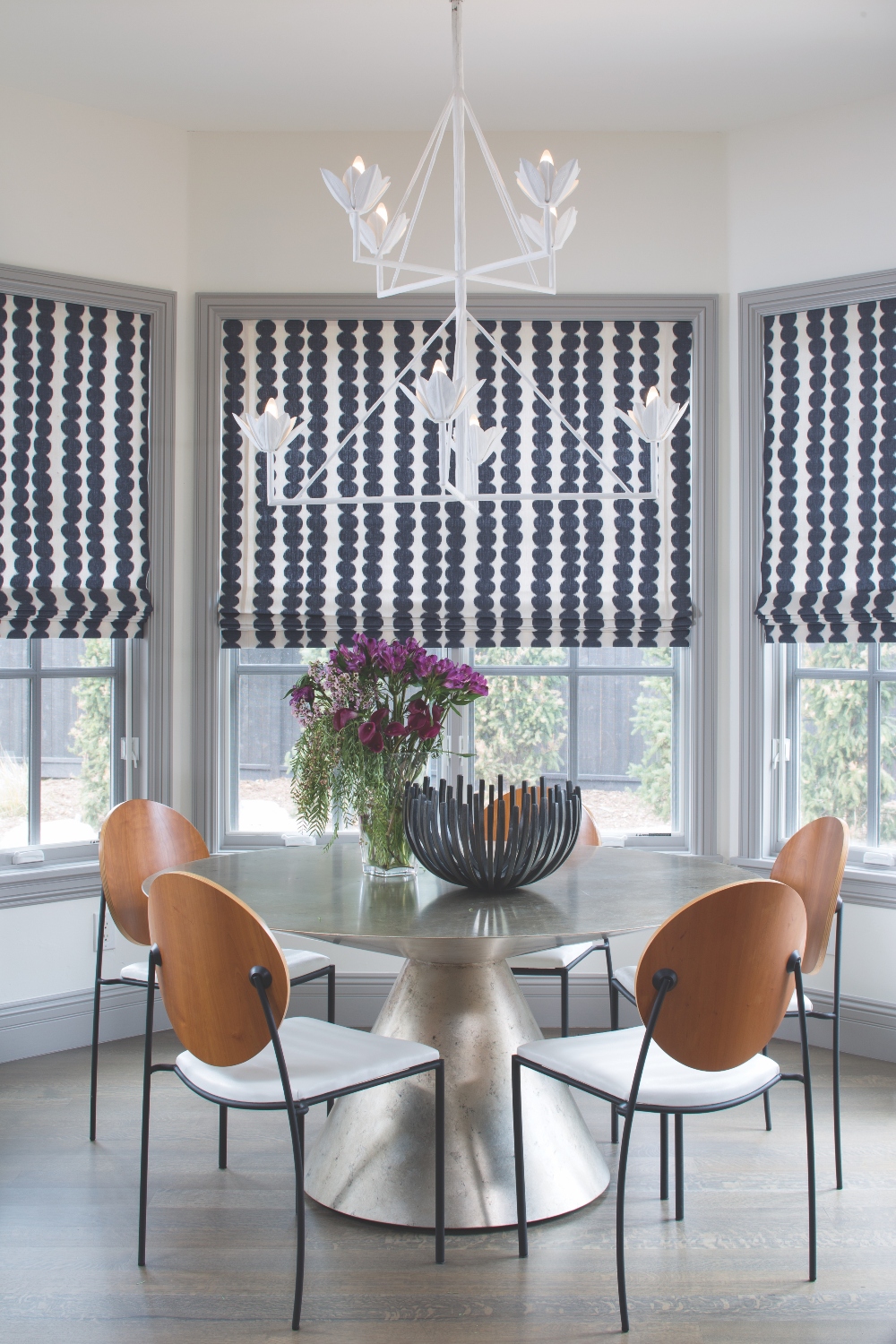 Breakfast Nook Dinner and Schwab chose a Perry Luxe Kobe Silver Tea Leaf table from Shanahan Collection for the sun-soaked nook. “We wanted something more solid than glass there, because there are already so many windows in that room,” Schwab says. They re-covered some chairs from the couple’s previous home and added a whimsical Paul Ferrante Small Marina Chandelier in Chalk White from John Brooks. 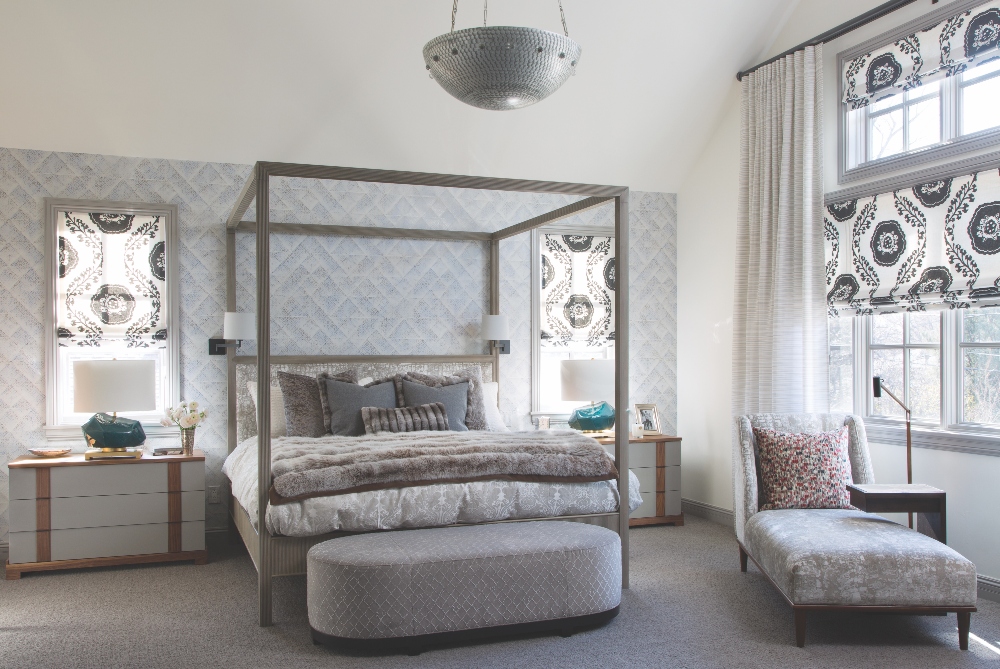 Master Bedroom A modern take on a traditional four-poster bed takes up volume in the high-ceilinged master bedroom, and double drapes on the wall of windows lend warmth to the breezy room. The David Iatesta Baldwin King Canopy Bed is from Shanahan Collection, and company kd custom designed the walnut and lacquer nightstands. The shade fabric is Zimmer + Rohde from Shanahan Collection; drapery fabric is Pollack Strand-Bamboo from Egg & Dart. 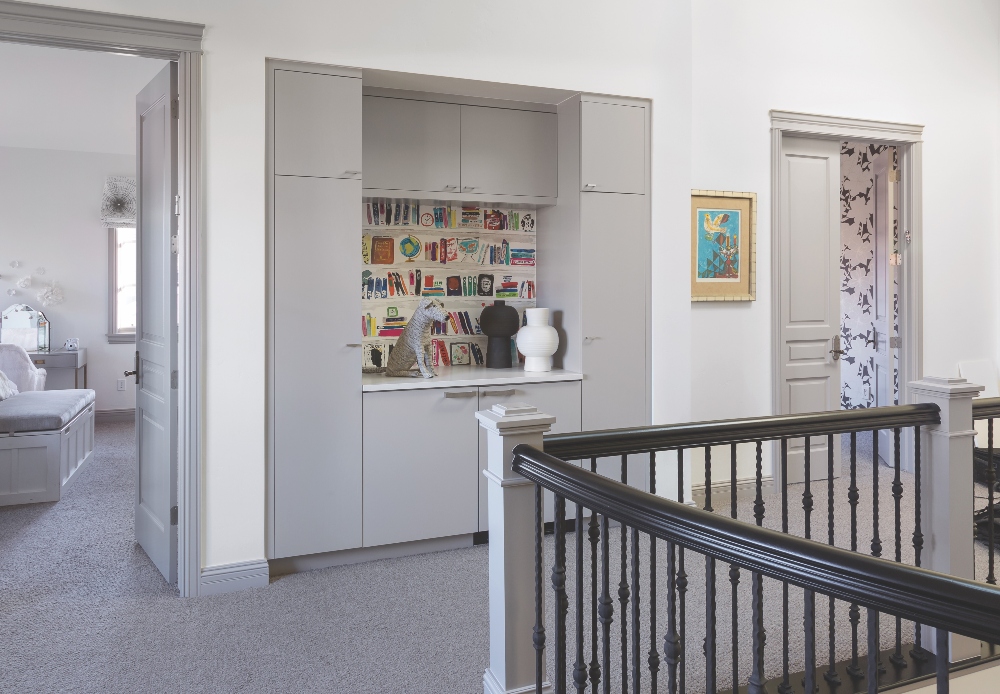 Landing The upstairs landing is another popular family-gathering place, because it’s the common space closest to all four bedrooms. The wall color is Benjamin Moore Mountain Peak White, and the trim is Benjamin Moore Stone Harbor.