A Natural Retreat for a Tight-Knit Crew

When a forty-something couple with two elementary school-aged daughters decided to move from their Observatory Park home to build in the quaint town of Bow Mar near Littleton, they faced a dilemma: how to construct a home for their active family of four that also met the neighborhood’s strict design requirements, including a non-negotiable one-story constraint. The solution was the same reason they love Colorado to begin with: the natural landscape.

Architect Kathy Jones designed the family of four a 6,200-square-foot ranch around an awe-inspiring view that embraces the country setting they have chosen over city living. Sitting up on a slight hill on three-quarters of an acre, the house offers a vista of a perfectly still lake framed by majestic snowcapped mountains. Of all the rooms in the house, only the breakfast nook doesn’t take advantage of the view, but that is an easy trade for Colorado’s early morning eastern sunlight.

“The most fun an architect can have is standing on an empty site and visualizing how a family can live and still have the amazing feeling you’re standing on a natural site,” says Jones. “I used an organic approach to settling on the land.”

Reinforcing the outdoorsy, rustic feel of the stone and stucco exterior are the natural elements found throughout the house: Bronzite Rustic granite slabs surround the great room fireplace, providing a rich, earthen finish; 14-panel ceilings and wood doors are found throughout the house; and a 16-foot arched ceiling in the main living space is covered in mahogany panels. “The owners are both former technical rock-climbers,” explains Jones, who worked with them for 18 months to build a masterly blend of form and function. “We brought in materials specifically made to remind them of rock formations they have climbed.”

The result is an unfettered space that creates a feeling of openness and uncluttered living. “It doesn’t have the same uniform that all of the other houses have these days,” says designer Conni Newsome of C + A Interiors. “So much that we’re seeing is so traditional—the dining room on one side, the study on the other—it’s very expected. But this house is so organic. There are no rules for how it’s laid out.”

The couple’s own major design mandate was a kid-friendly house with nothing off-limits. So Jones worked with them to create a stylish yet functional solution that provided plenty of shared space but also some natural divisions. The center of the light-filled house would be family-focused, with a kitchen, breakfast nook, great room, and dining area, while the two ends of the house accommodate the parents’ wing and kids’ wing on opposite sides.

To delineate the spaces, Jones chose different ceiling treatments for separate areas of the main floor. The dining room is a pocket corner of the great room, for example, so it doesn’t have the same arched mahogany panels as the great room. Likewise, the kitchen ceiling drops down significantly, while the wings of the house are both cordoned off by large, industrial-style wooden barn doors. “We didn’t want the intrusion of a swinging door blocking off a space,” says Jones. “We used the barn doors on the long axis of the house so they are seen as entrances to the wings.”

While Jones has dubbed the style of the house Colorado Western Contemporary, Newsome insists it is Industrial Modern: “There’s a great mix of materials, with metal, wood, stone, and concrete. But it still has that modern Denver vibe.” She and partner Ashley Larson took charge of the home’s soft furnishings, using modern elements from Town, HW Home, Design Within Reach, and Room & Board, with rugs from Missoni completing the geometric tone of the house. The interior is decidedly uncluttered and unfussy.

Just as Jones incorporated the outdoors into the house’s exterior elements, Newsome and Larson translated the inside experience into earthy, organic furnishings that frame the natural aesthetics of the mountainous surroundings.

The great room leather sofas are from Design Within Reach, while the hair-on-hide coffee table is Bright from the Town showroom in the Denver Design Center. The few draperies in the main living area are neutral and soft—and always open, of course, so that the family can look out.

When the owners requested blues and greens in the palette to mimic the colors of the lake, Jones cheerfully complied, choosing blue tiles for the master bath and green tiles for the kitchen. The splash of color adds some levity and playfulness to the rest of the home’s neutral and earth-toned walls and surfaces. Newsome and Larson also used bright colors in the girls’ rooms, even letting the children pick out their own color palette. Faux-fur window seats and Lucite boxes holding stuffed animals provide a cleanup solution that’s both practical and modern.

On the lower level, the walk-out basement has a large rec room, a striking Sandalwood Sandstone fireplace, a built-in kitchen, an exercise room, and a guest room. But the sweetest part of the lower level is the “family office,” a large room with two sets of desks facing each other, one for the girls, and the other for the parents. “This is a very close family who enjoys being with each other,” says Newsome.

Bow Mar, with a population of 900 and an area of less than 1 square mile, is a “well-kept secret of Denver,” says Jones. “No one knows it’s here. It’s the quintessential definition of the best living conditions in Colorado—the mountains and the lake.” And now, a couple of former rock-climbers and their girls are thriving there, happily grounded in style and surrounded in light. 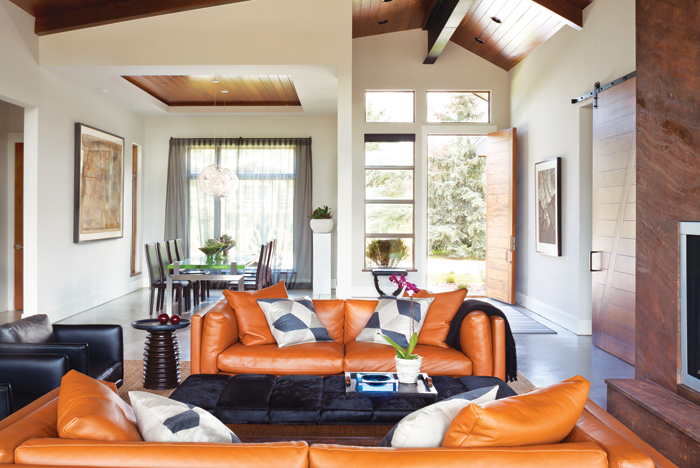 Two relaxed Design Within Reach sofas mingle with a hair-on-hide coffee table by Bright Chair, a vintage end table from Black Tulip Antiques and a jute rug from Aztec. “It’s casual and comfortable, but still has a level of dressiness,” says Newsome. The black-leather chairs by Milo Baughman add an element of modernity. 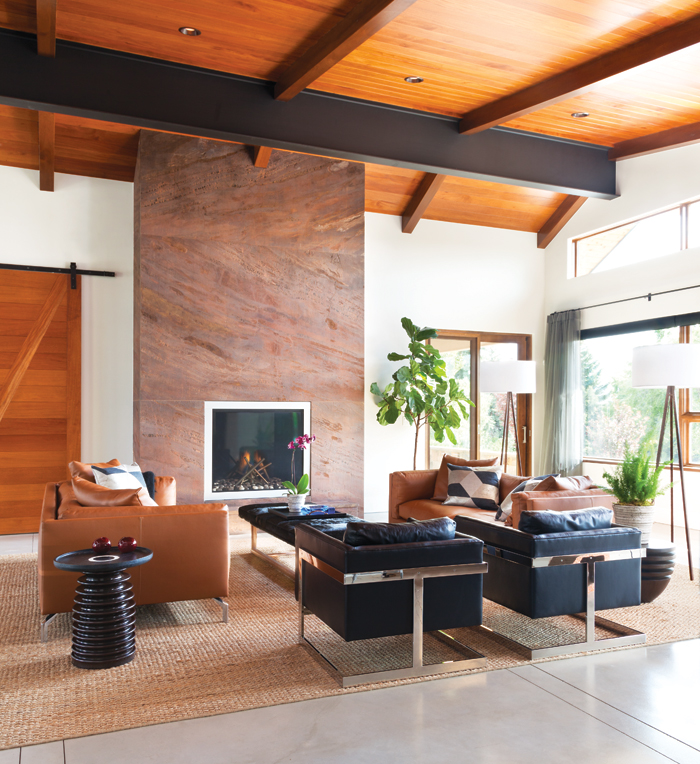 A dramatic floor-to-ceiling fireplace fabricated from a single sheet of Bronzite Rustic granite is the focal point of the great room. “It’s a reminder of the red rock formations the owners have climbed,” says architect Kathy Jones. “It’s very in vogue right now to use greys, and black and white, but that can translate as cold,” she explains. “So, we used the red of mahogany (on the ceiling) and Bronzite stone to give the house organic feelings to warm up the backdrop of grey.” 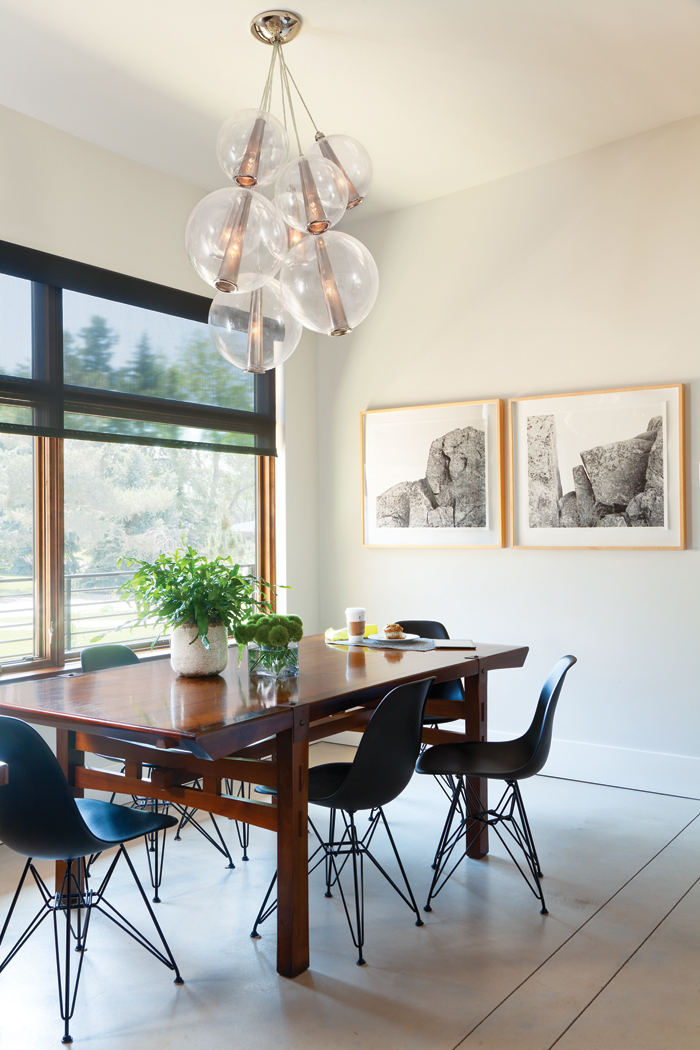 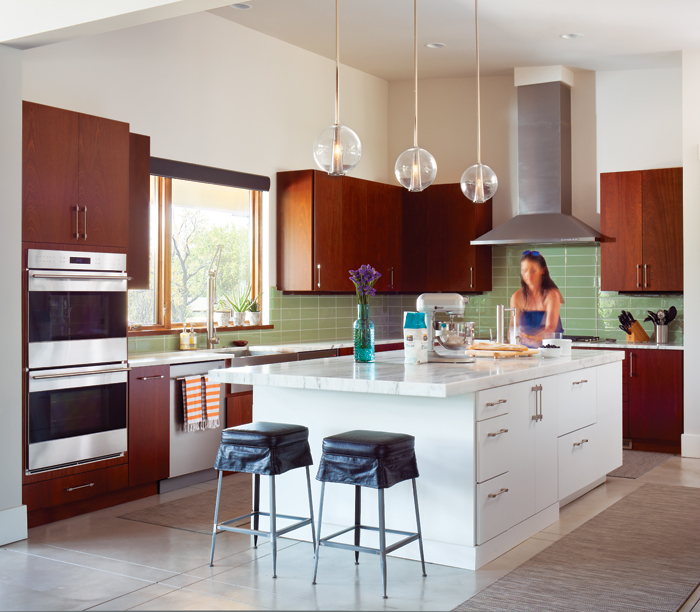 Jones’ favorite room is the kitchen. “I love the function of it. There can be multiple cooks in separate spaces — the layout really works well.” Plus, she says, “you can be in the kitchen cooking for hours, but with the view, it’s almost like you’re outside.” Retro “Caviar” light fixtures by Arteriors hang above the honed marble countertop. The slab-wood cabinetry is mahogany and the backsplash is green Villi glass tile. 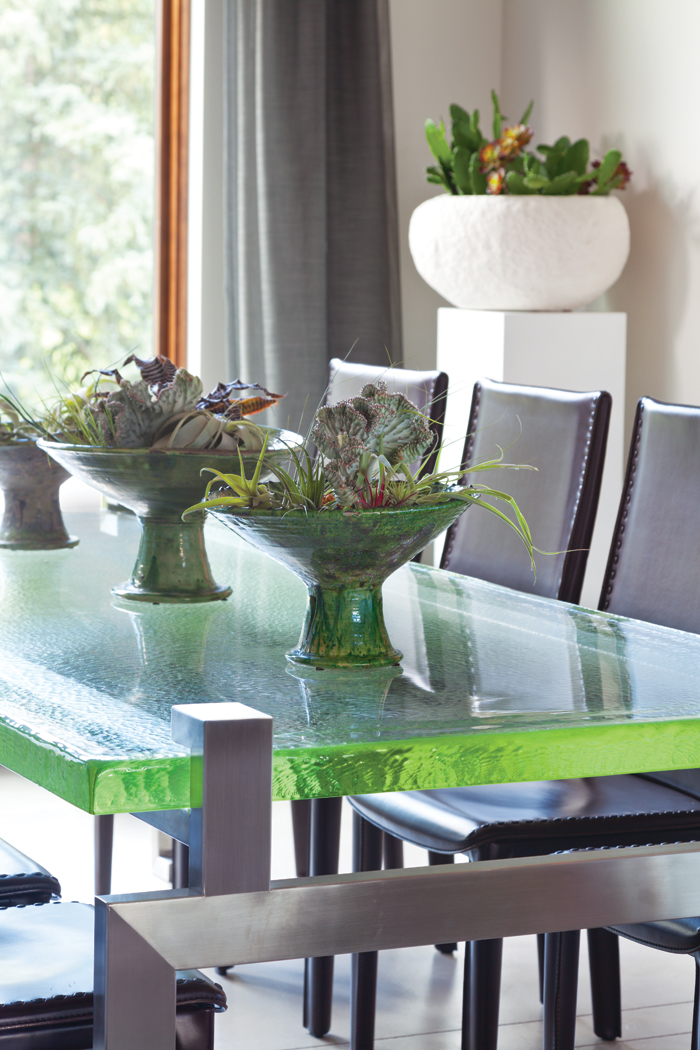 Newsome and Larson had concerns about the sheer weight of the Magni dining room table from the Town showroom. “We, the designers, came in after drywall and we didn’t know if the floor would support the weight of the table,” says Newsome. “So, we tore out the ceiling below and put in additional structural support.” The designers had to hire nine movers to get the glass-top table, weighing 1,200 pounds with a steel base, into the house. 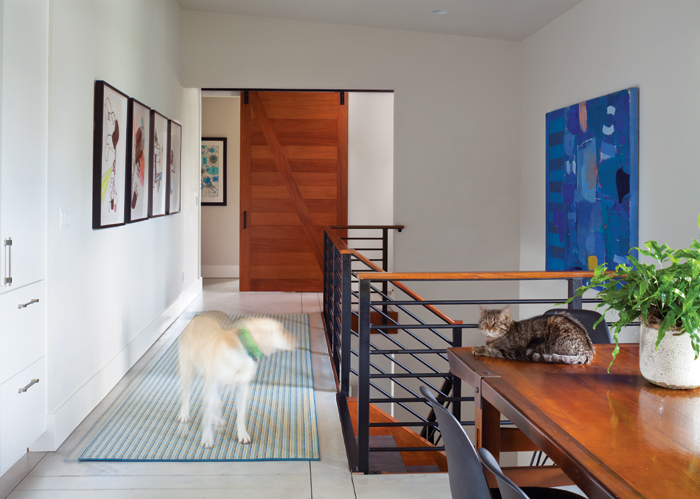 In the breakfast nook a Missoni  rug from Aztec Custom Rug adds just the right touch of sophistication and color. Neolith porcelain slabs inset into wood stairs, along with iron handrails, complete the staircase leading to the lower level. 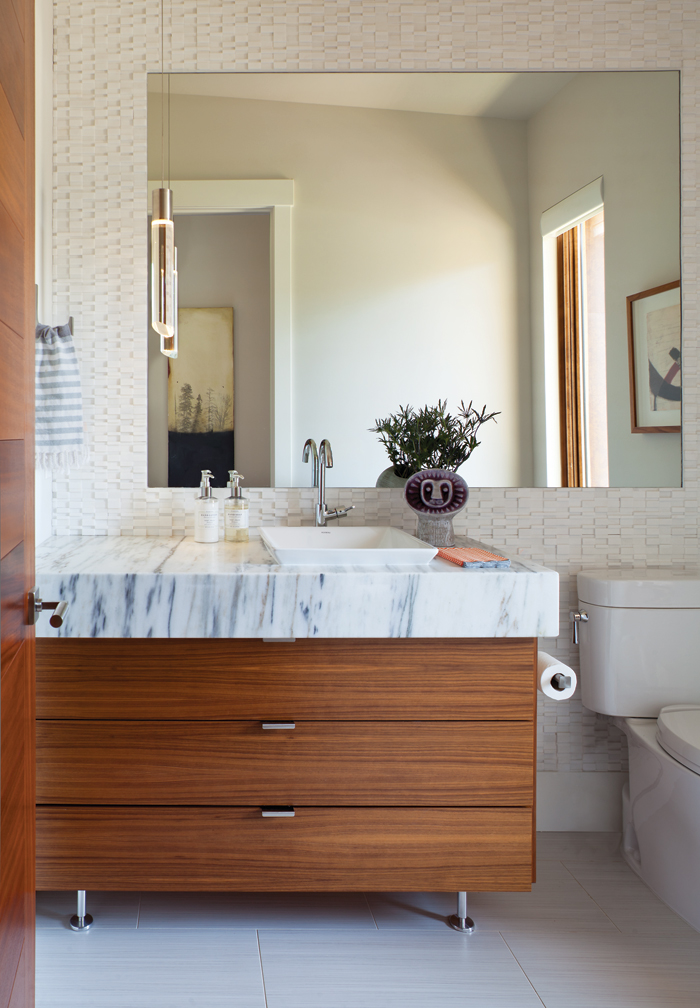 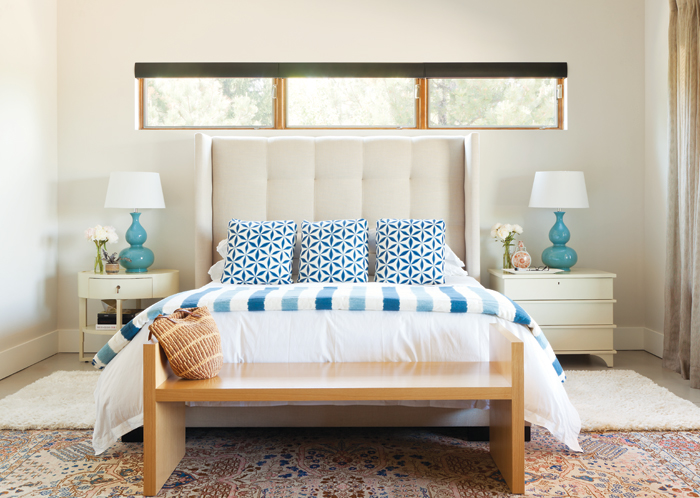 The owners were drawn to ocean-inspired colors and fabrics, as they had moved from Manhattan Beach, California, in recent years. The 6-foot-high Brownstone Upholstery bed from Town is covered in oatmeal linen, with a calming, beach-inspired blue geometric bedding by Michael Smith from John Brooks. The Edward Ferrell + Lewis Mittman bedside tables were chosen specifically as “hers” and “his,” says Newsome, based on the feminine and masculine feeling of each piece. The bench at the end of the bed is custom-made from rift-cut white oak. 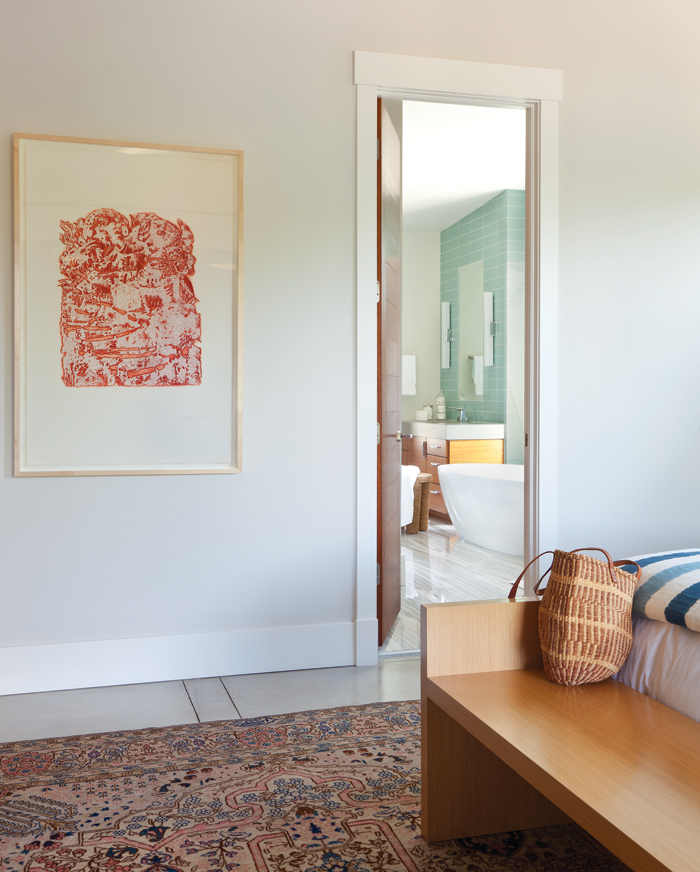 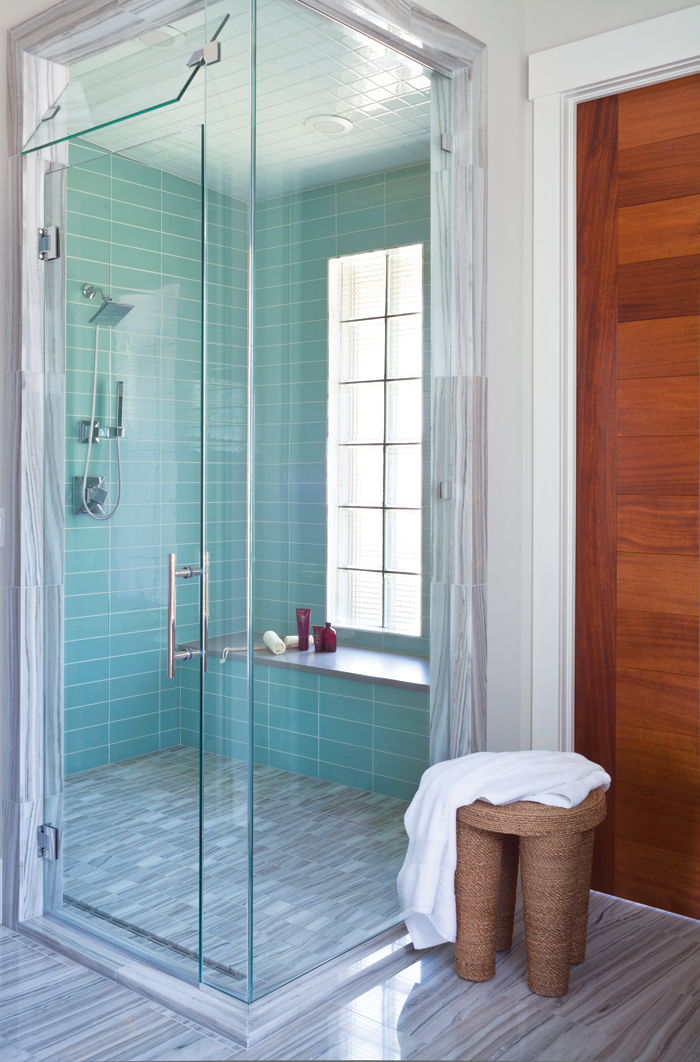