When the couple first laid eyes on the house, in Denver’s Country Club District, the architect side of Amy saw a midcentury modern home with great bones and a handsome pedigree (it was designed by Denver architect Paul Atchison in 1955). The original aesthetic, however, had been lost over the years as it morphed into a 6,500-square-foot “nineties contemporary,” with white carpeting, whitewashed wood, a white kitchen, and rooms with rounded, Santa Fe-style corners.

The mom side of Amy saw the potential for a great family space. “Both Paul and I like midcentury modern because it is very livable and warm,” Amy says. “We’re an active family, and the midcentury style is not so pristine that our kids (Aaron, 10, and Maris, 7) couldn’t play hide-and-seek inside and out while our dog (a miniature goldendoodle named Tucker) was also running around. Once we bought it, we knew we wanted to take it back to those midcentury modern roots but also make it a place we would all feel comfortable in as the kids grew up.”

While Amy pondered what to do with the interior spaces, Paul focused on the outdoors: The one-third-acre property included a large front yard tailor-made for playing sports with Aaron and Maris. “Our previous yard was perfect for toddlers, but we had outgrown it,” she says. “We were already seeing that our family needed more space to run and roam and explore—and Paul said he could imagine having a soccer field out front.”

Amy spent three months drawing designs for the remodel—with Paul’s helpful input. “We architects can get tunnel vision, so it’s good to have somebody to bounce things off of, and he had some really great ideas,” she says. Downstairs, they kept the layout roughly the same, with several important tweaks: “We enclosed the kitchen a bit more to make it more functional but also because when we’re having dinner parties, the last thing I want to do is look into the kitchen and see the giant mess I’m going to have to clean up,” says Amy. In the heart of the first floor, they also added sliding doors on either end of what had been an office, so it could be enclosed to create a quiet sanctuary and library for reading (one of Amy’s passions) and doing homework. And gone are the light wood finishes from the nineties, replaced by a warm, vivid walnut in the kitchen and on the stairs leading up to the second floor, “because it felt like that material belonged in this house,” says Amy. Turns out their instincts were right on both counts: After construction was complete—it took about a year—“we found the architect’s original drawings, which showed a walnut kitchen, as well as a library in the middle of the house,” she says.

Finally, adds Amy, “The size of the walls meant they were just screaming for artwork, so we made them very white throughout [Benjamin Moore’s Chantilly Lace] so the art could be the focal point. And to add contrast to the white walls and rich walnut, we added black slate floors.” Avid travelers (in June, the family of four went to Ireland, Amsterdam, and France), the McPheeterses have been collecting art for years while on trips, but they knew they would need to up their game in this house. So they turned to art consultant Ann Benson Reidy, a friend. “Ann really helped us find pieces that fit in this house but also spoke to both of us,” says Amy. As for the upstairs, Amy says, “Primarily we wanted to clean up the floor plan to make it more livable for our family.” In addition to a master suite and office, she created a bedroom-bath combo for each of the kids (who got to help out by choosing the accent wall color for their rooms, as well as the color of their baths), plus a game-and-crafts room that can double as an additional bedroom.

Outside, they modernized the landscape by taking down some overgrown crabapple trees and cleaning out the understory of three huge blue spruces to create better sight lines from the street to the house and give the kids room to play underneath. “Aaron and Maris love the yard,” Amy says. “After we bought it, we contemplated whether to keep a dry creek bed on the property that was filled with boulders. But it was like the Giving Tree, where we would see the kids playing out there, looking for worms underneath the rocks or playing “Star Wars,” and we are thrilled we kept it.”

Above all, Paul and Amy have created a fun family space. “As a mom, what I love most about our home is how much the kids can run around and play,” Amy says. “I can’t tell you how many times this house has been used as a racetrack for running kids and running dogs. Maris used to have a Hippity Hop ball, and she would go around and around—through the family room, the library, the living room, the kitchen, and back again. And when one of the kids is practicing piano in the living room, you can hear it from every room downstairs, and that makes my heart glad.” The fun extends to the adults, too: “Because we like having an indoor-outdoor feel,” says Amy, “we added NanaWall glass accordion doors off the family room, kitchen, and dining and living rooms so the house feels very porous. We love to open up those doors when we have parties so people can flow inside and out.”

Now, the McPheeterses feel that their midcentury abode has come home again. “I think the original architect would be happy with the way it has gone back to what he envisioned,” Amy says. “But even before we put our touches on this house, we knew it had these intangibles, like the quality of the light from all the skylights. It’s modern but not sterile. It’s full of life and energy, just like our family. Paul and I have taken a lot of amazing trips, but what delights us the most is that when we come back, it just feels so good to be home. We love this house so much.” 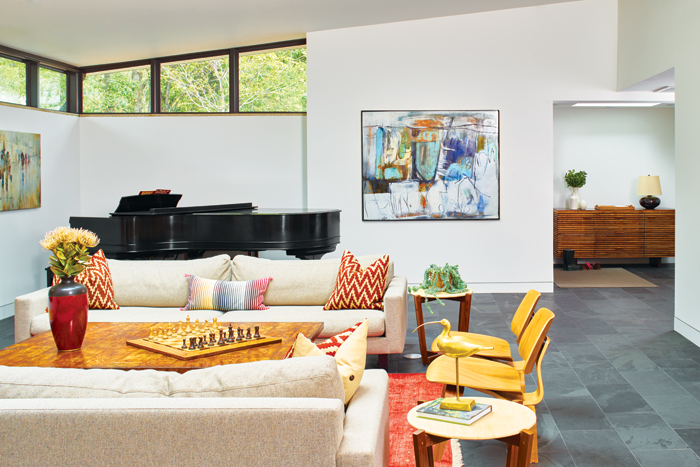 The living room, at the front of the house, is anchored by an 1893 Steinway grand piano inherited from Amy’s aunt and uncle. “The size of the walls,”  Amy says, “meant they were just screaming for artwork,” including “Anonym,” by Austrian artist Margit J. Füreder, and (on far wall) “Otiyot,” by Colorado artist Andy Berg. 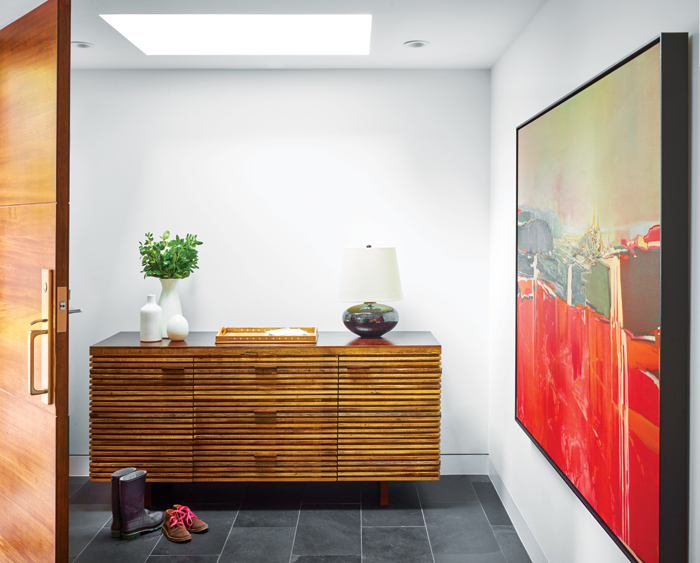 The large painting in the foyer—”The Flats,” by Colorado artist Beau Carey—sets the tone for the couple’s home. “It has a spatial, architectonic quality to me,” Amy says. “It’s reminiscent of a mountain landscape but has an abstract, painterly feel which moves it beyond the typical landscape genre.” 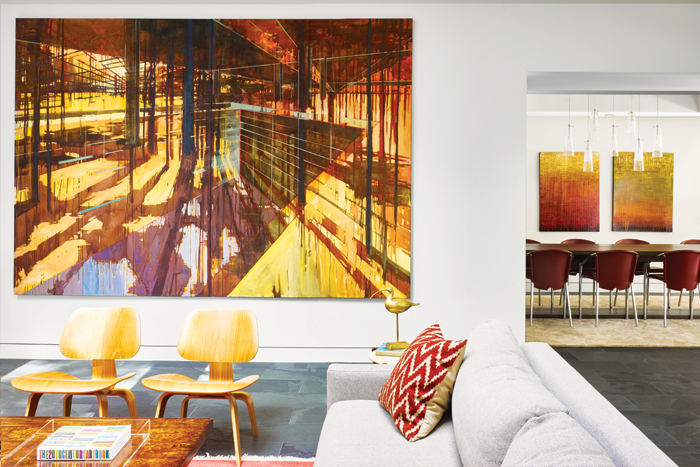 The two paintings in the dining room, titled “Soprano” and “Symphony,” are by Arizona artist Marlene Barnes; the leather dining room chairs are from Roche Bobois. The large painting in the living room is titled, "Private view of public space," by Colorado artist Laura Carpenter Truitt. 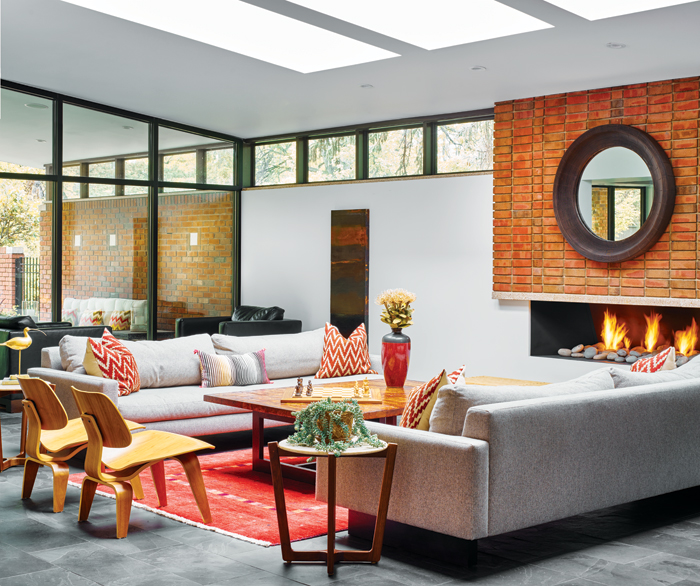 After they bought the house, the couple uncovered and refurbished the fireplace’s original brick and terrazzo trim and elongated the opening to emphasize the linear proportions of the living room wall. ”This room has become our cold-weather game spot,” Amy says. “Our kids learned how to play poker around that fireplace!” 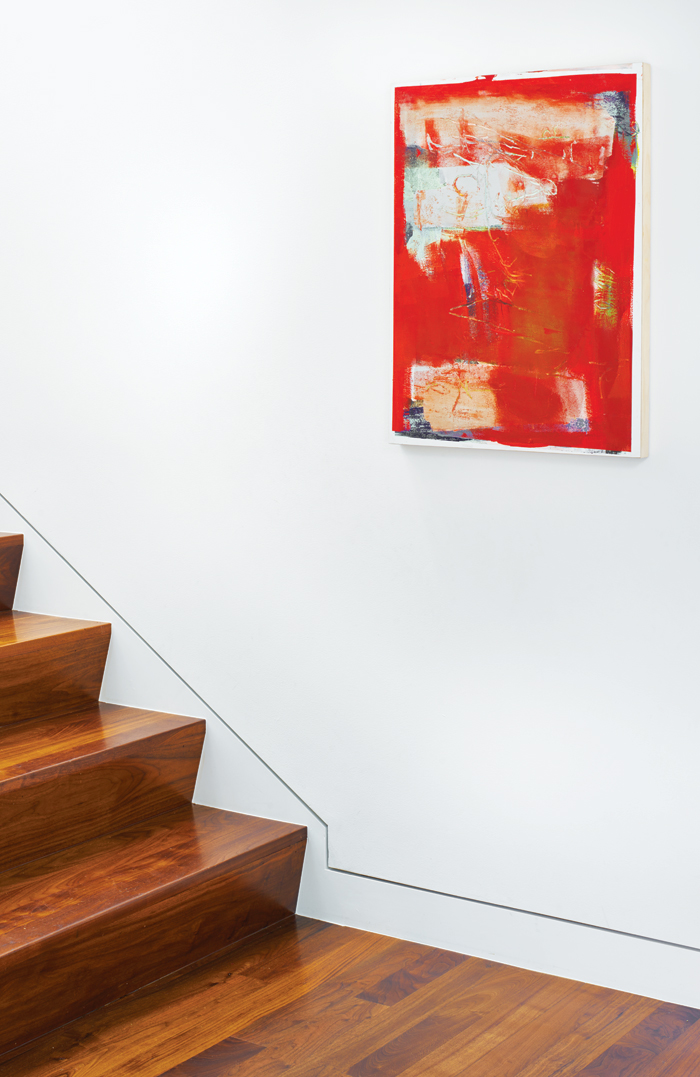 The McPheeterses loved the vibrancy of the painting “Red,” by Colorado artist Andy Berg, at the bottom of the stairs to the second floor. 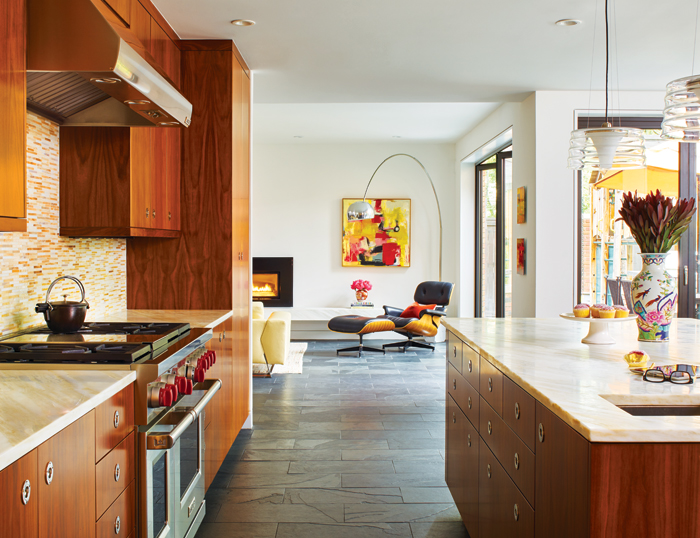 The kitchen’s rich walnut cabinets were chosen for warmth and as a nod to the house’s midcentury roots. Working with Exquisite Kitchen Design, they chose a refined, silky finish that is very modern—not fifties in feel. To contrast with the walnut, the McPheeterses used a light-colored Calacatta Honeymoon marble with diagonal gold veining, then added round, polished-nickel pulls that are flush to the cabinets to contrast with their extreme linearity. 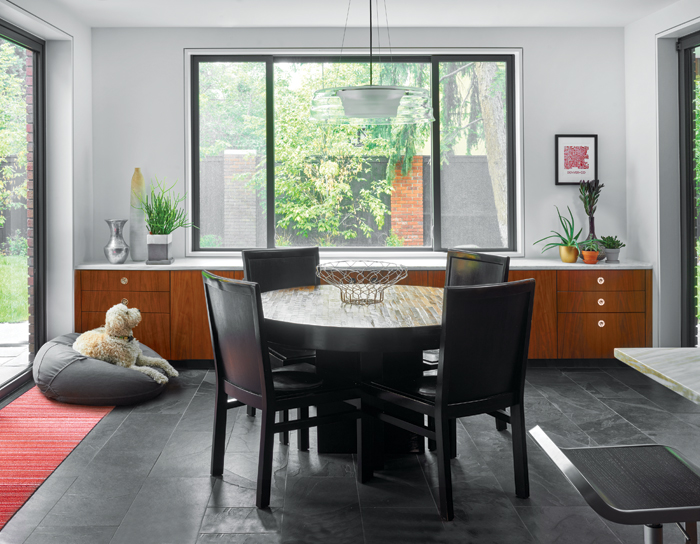 The walnut cabinetry and Calacatta Honeymoon marble countertops extend into the breakfast and family rooms. ”This is really where we do most of our living,” Amy says, “and we wanted the integration of spaces to be seamless.” In warmer months, the NanaWall doors extend the living space outdoors to the patio. 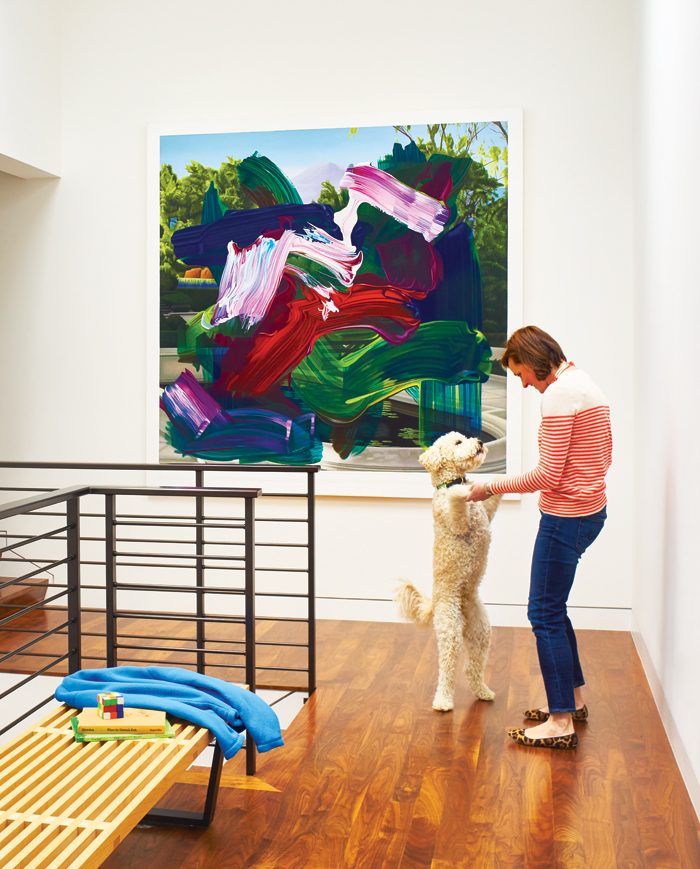 Amy and the family’s miniature goldendoodle, Tucker, play in the upstairs hall. The large painting, “Vesuvio e Claro,” is by Bob Knox, a New York artist the McPheeterses found through Ann Benson Reidy, a friend and art consultant. 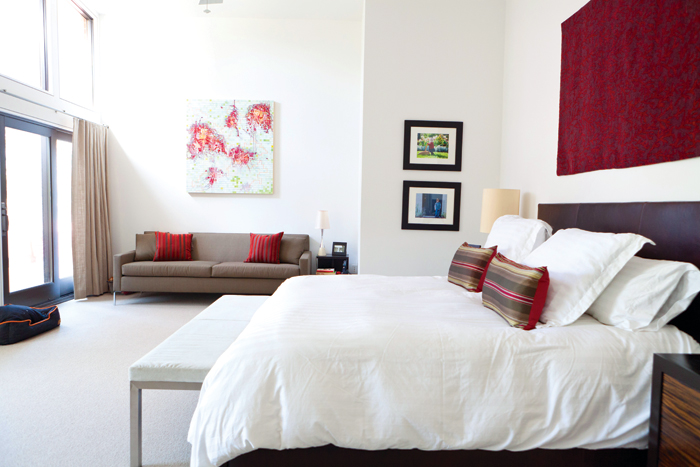 The McPheeterses extensively reconfigured the upstairs, including reorienting the master bedroom to increase privacy and create a view to the outside, and turning the former master bath into a study. 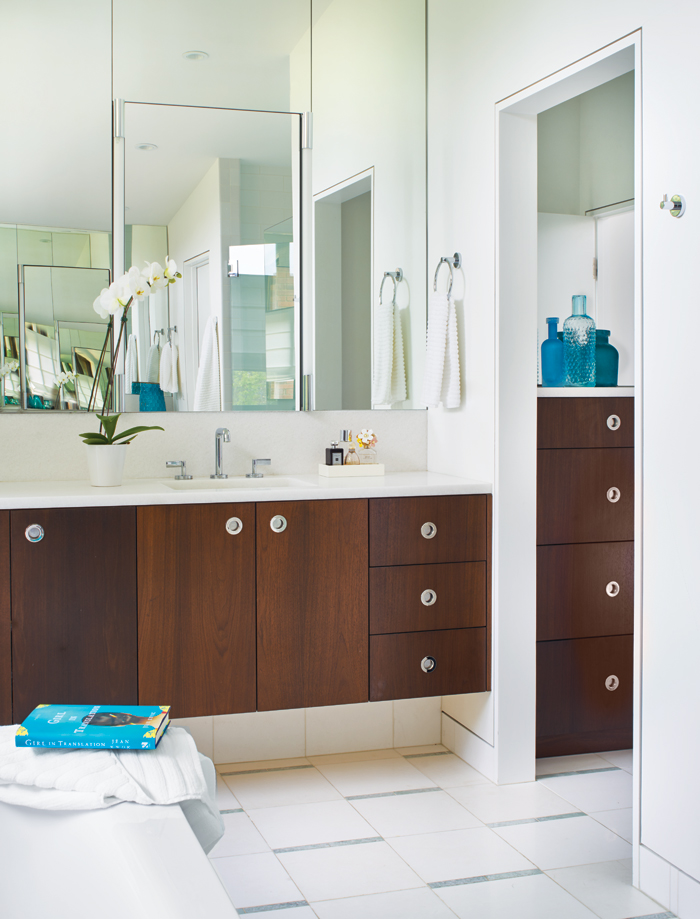 “The starting point for the master bath, once it was relocated, was really about the color: the blue-green of water,” Amy says. “But we wanted to use color sparingly, in the form of accent tiles in the floor and a glass tile mosaic at the back of the shower.” 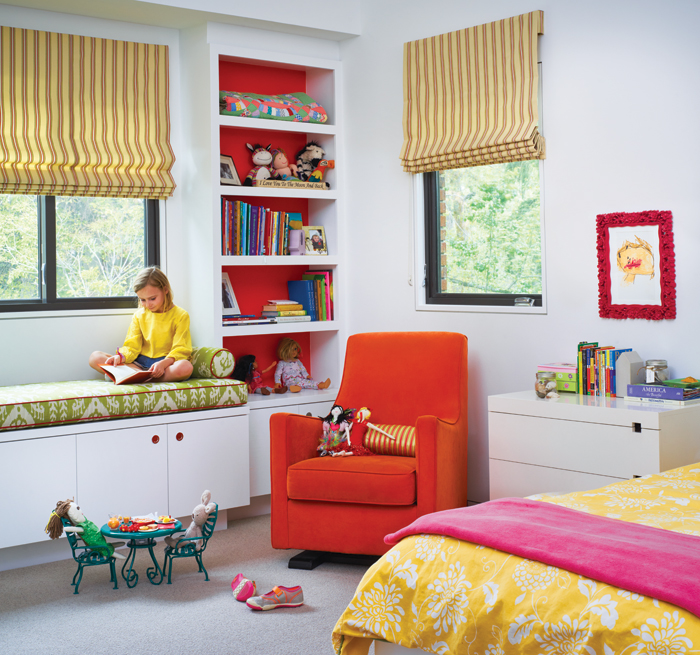 The bookshelves in Maris’s bedroom hold toys and seasonal clothes while also displaying her favorite treasures and books.