A Home Transformed into an Urban Treehouse

“Creating a piece of art around someone else’s piece of art … that was the real challenge,” says architect Jack Snow of the Charles Haertling-designed house in Denver’s Hilltop neighborhood that his friends Ron Guillot and Ali Theriault asked him to renovate. The house, an exceptional example of the brutalist genre, with cast-in-place rough surface concrete on both the exterior and interior, severe copper finishes throughout and small dark spaces, had almost zero function. Guillot and Theriault envisioned an art-and-light-filled, family-friendly home for their posse of four (Remy, 10, and Elle, 8). Snow was quick to embrace the challenge. “This was an original. It had such a phenomenal pedigree. I couldn’t let that go.”

Haertling, a famous Boulder-based architect who died in 1984 at age 55 of a brain tumor, originally designed the house on Shangri La Drive for the Razee family in 1970. Guillot and Theriault bought it in 2013 and waited patiently while Snow and his team spent almost three years expanding the 1,900-square-foot design into a 3,880-square-foot, four-story house with an added master bedroom, enlarged kitchen, new entryway and added third-level rooftop pavilion. It took months just to match the wood and copper pattern of the original design, while figuring out how to increase the fluidity of the tight spaces and add natural light while still respecting the Brutalist legacy.

“Haertling wouldn’t roll over in his grave if he saw it,” says the humble Snow. But Guillot, a New Orleans native, is downright giddy. “I moved here because I’m in love with the mountains. I always imagined if we bought this house, we would build something on top and see out,” he says. “Now I see the mountains at sunrise. I see downtown lit up at sunset. I see lightning storms, and I’ve seen three rainbows at once. I live in an urban treehouse.” 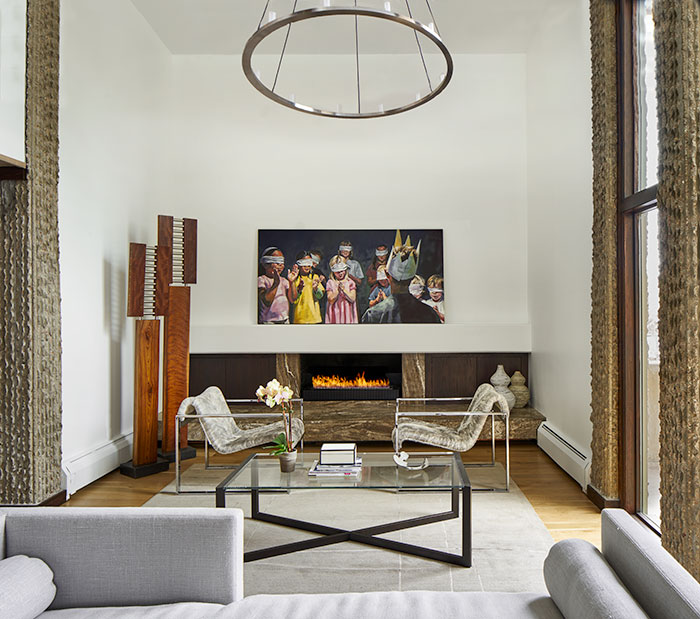 “Ali didn’t want kid-friendly furniture. She wanted it to look finished, contemporary. We don’t let our kids eat off the children’s menu, so we weren’t going to do that design-wise. The orientation is grown up.”
— Ron Guillot, homeowner 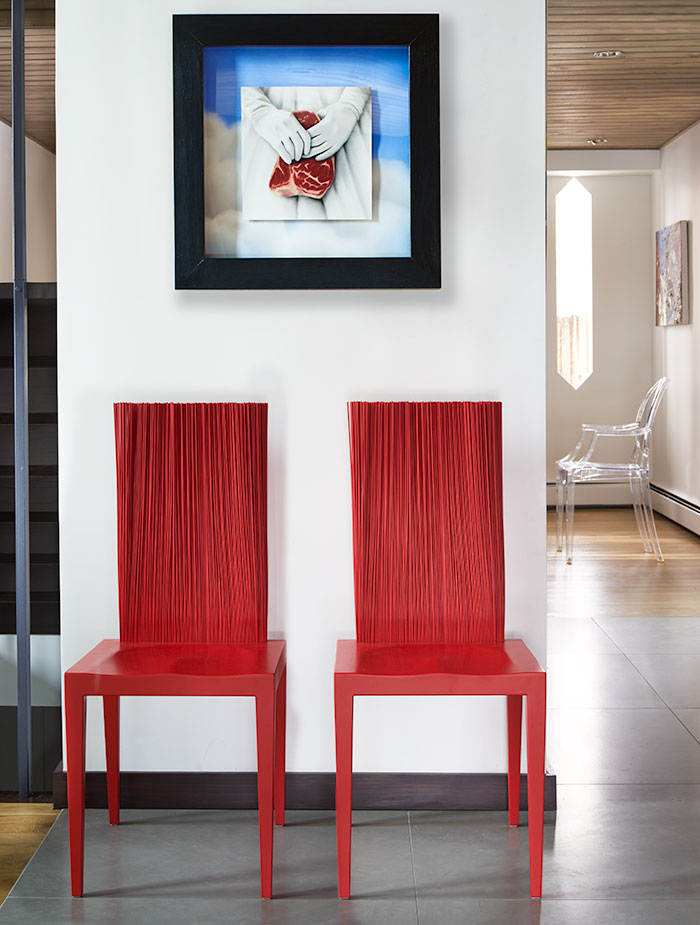 Two playful cherry-red Campana chairs are placed under a multi-media piece by Riva Sweetrocket in the newly fabricated entryway of the house. 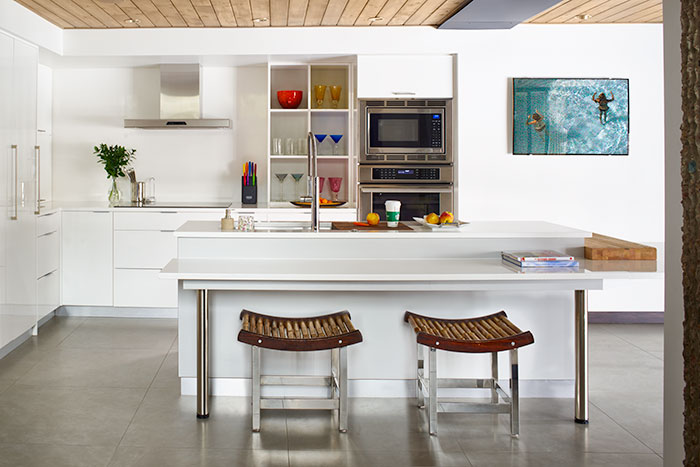 “We made sure there were big open walls for art. We love art because it tells a story, it’s fun, it makes people think.” — Ron Guillot, homeowner 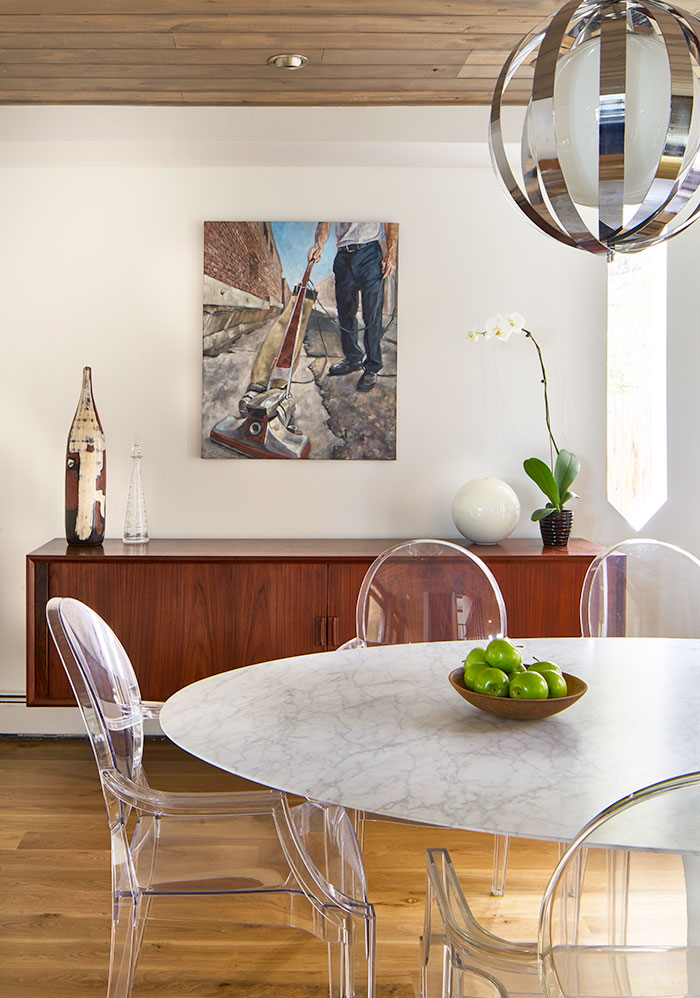 An elegant Eero Saarinen table by Knoll is flanked by Philippe Starck Louis Ghost Armchairs, allowing ample seating for the family of four in the intimate dining room. A vintage Italian chandelier from Jean-Marc Fray French Antiques in Austin, Texas, hangs from above, coupled with a vintage buffet from ZModern. The painting is by Denver artist Wes Magyar.

A Herman Miller bench lends both practicality and durability in the hallway next to the third-floor staircase, a steel-and-wood design by builder Jonathan Coppin that offers a present-day take on a brutalist ‘70s structure. 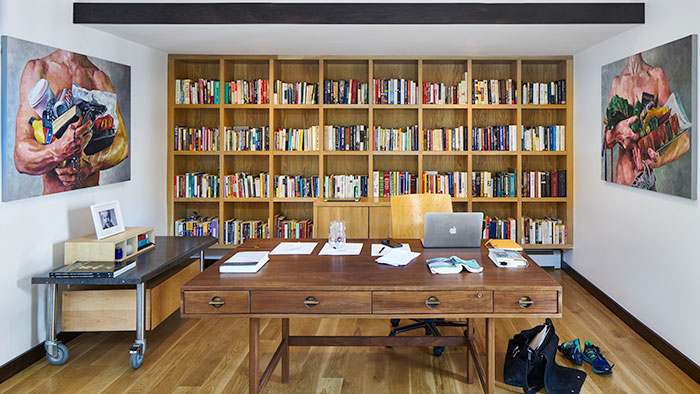 The opposing paintings are Denver artist Wes Magyar’s representation of a 21st century yin/yang, or the dichotomy between good and evil. The side table was made by local furniture designer Ted Davis. The desk is a Linus Vintage Partner’s Desk from ZModern. 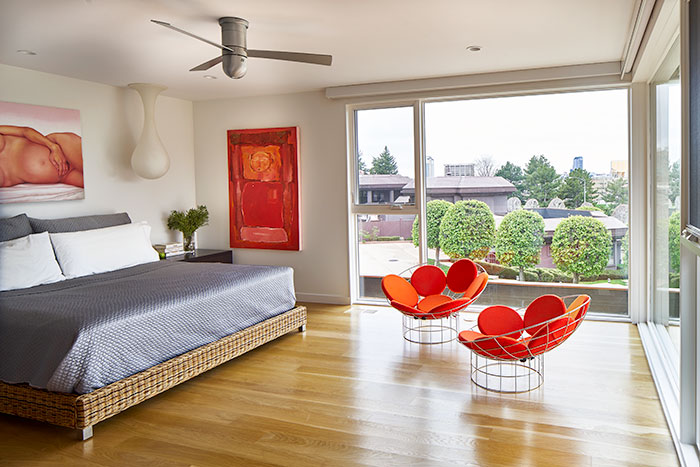 In the master bedroom, a Jenny Morgan painting hangs above a Donghia bed from Town, with an adjacent light fixture by Next Design Company that Guillot likes to call “the nipple light.” The side wall painting, also by Morgan, helps integrate the bright orange felt chairs by Verner Panton into the overall space.

“The challenge in this was dealing with a piece of art and respecting [Haertling’s] vision, but to also respect my vision and then marry those two. And knowing that we had to make the composition a sculpture.” — Jack Snow, architect 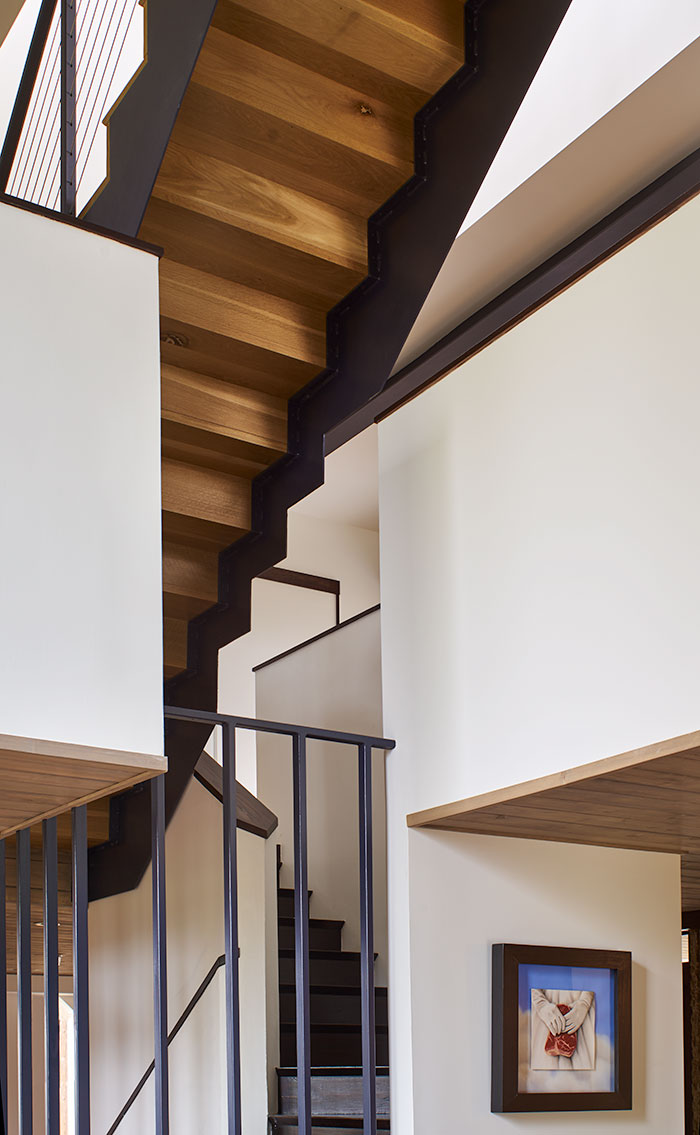 Owner Ron Guillot says other than a 1,500-square-foot loft he lived in downtown, this narrow, three-story house is easily the most efficient home he’s ever had. “It’s a tight, compact, easy house to live in with a ton of natural light.” 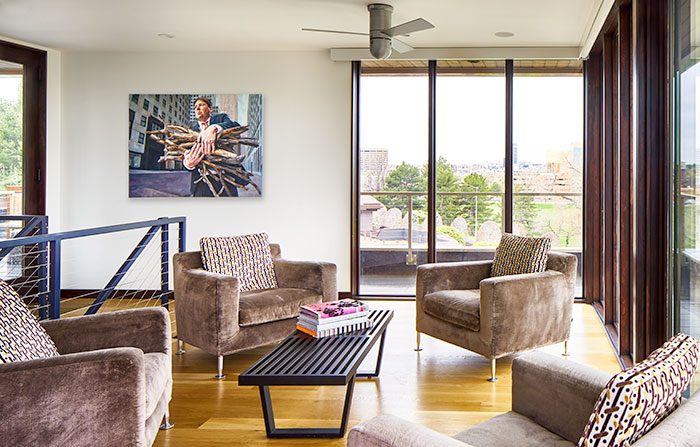 A third-floor lounge has a Wes Magyar painting and chairs by B&B Italia. The breathtaking treetop views are paramount to the owners. Says Guillot, “I see the sunrise. I see the mountains. And I come up every evening at sunset to see downtown light up."