A Home That Says, "This is Us"

After more than two decades of raising kids in Hilltop, this Denver couple embraces a new groove

At a party in Los Angeles in the mid-1980s, the fates of a girl and a guy were sealed when he asked her to dance to Bruce Springsteen’s Dancing in the Dark. Today, after attending more than 500 concerts, music is still at the soul of the 30-years-and-going-strong relationship. So when this Denver couple decided it was time to celebrate their parental graduation, they ditched the Tudor house in a neighborhood reminiscent of the wife’s East Coast upbringing and settled on something more conducive to getting the next bit of their party started.

“This is the time in our life when we can buy a white couch, entertain friends on weeknights, relax in the back yard and drink a beer,” says the homeowner. “Our kids were so sentimental and sad about leaving the house they grew up in. They didn’t want to admit that they don’t live there anymore. But they are starting to come around to the new house!”

“This was about the next phase of life, our nesting spot.” — Homeowner

The home that answered the call was originally two separate structures—small farmhouses built in 1912—that had been combined 40 years later into one 4,000-square-foot address in Denver’s Country Club neighborhood. “I had a vision that wasn’t so obvious to everyone else,” says the homeowner, a detail-oriented former CFO, who interviewed three architects before hiring Carlos Alvarez of Alvarez Morris Architectural Studio to design the year-long renovation.

Critically important to the homeowners: a floor plan that allowed every room to open up to a central courtyard and fountain. “I am from in Spain, where every town has an open plaza for socializing,” says Alvarez. “Designing a home with a courtyard layout is in my DNA.”

Alvarez left the existing brick exterior intact, instead opting to spend the couple’s budget on reconfiguring the internal structure to showcase the private courtyard. They encouraged Alvarez Morris interior designer Lauren Perry to place their colorful artwork and other pieces from their travels on the walls and the floor-to-ceiling bookcase. The couple’s love of travel, culture and especially music is carried throughout: A full wall mural of Elvis Costello lyrics is the centerpiece of their youngest daughter’s bedroom (a 1977 Costello tune inspired her name); a collection of hot sauce, a nod to the husband’s Western roots, adorns open kitchen shelving; one hallway includes concert posters from The Replacements and Wilco, as well as a Morrison Hotel Gallery photograph of Springsteen circa 1978; and the pride of the living room is an old-school turntable along with a 450-album cache. “We have a treasure trove of vinyl,” the homeowner says. “Music is what brought us together, and it continues to be something special that we share. I think for a marriage to really last, you have to have much more in common besides your kids.” 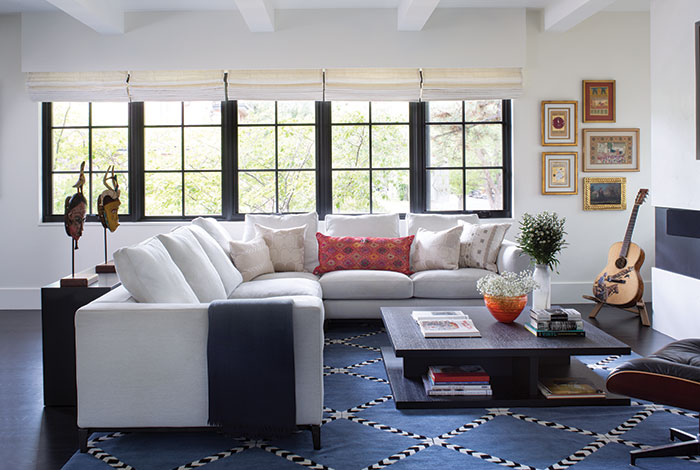 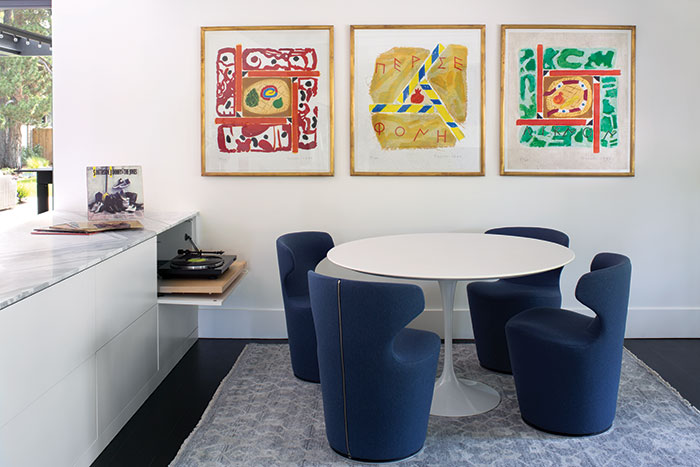 “The turntable is a little bit more labor than Spotify, but it’s fun and brings back memories for everyone.” — Homeowner 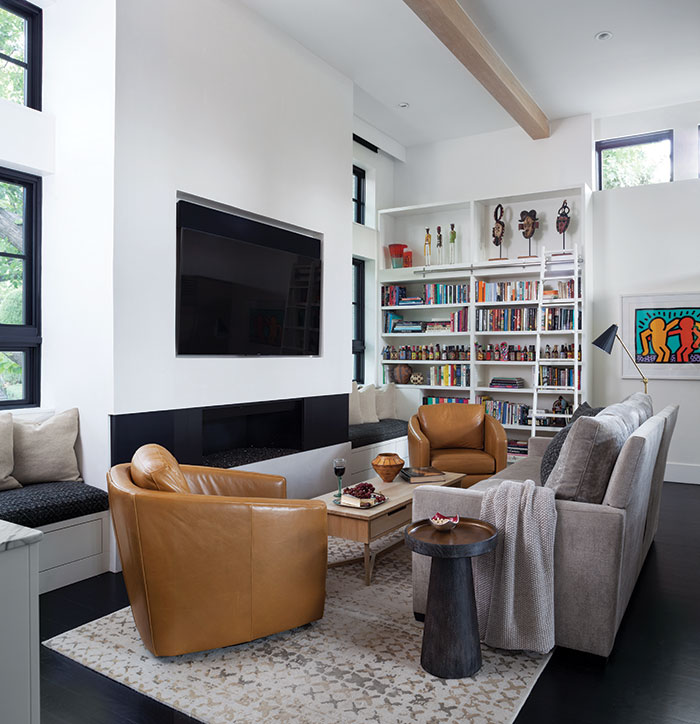 A nap-worthy, reclining sofa from the Caperton Collection at Egg & Dart in John Brooks’ Donghia Divan fabric sits atop a custom wool-and-silk Tamarian rug from Shaver-Ramsey. Room & Board swivel Ford chairs in Urbino Camel Leather surround a bespoke rift white-oak coffee table from Denver’s Where Wood Meets Steel. The side table is the Palecek table from CAI, the floor lamp is from Jonathan Adler, and the hanging artwork is Keith Haring’s numbered silkscreen Best Buddies, circa 1990. 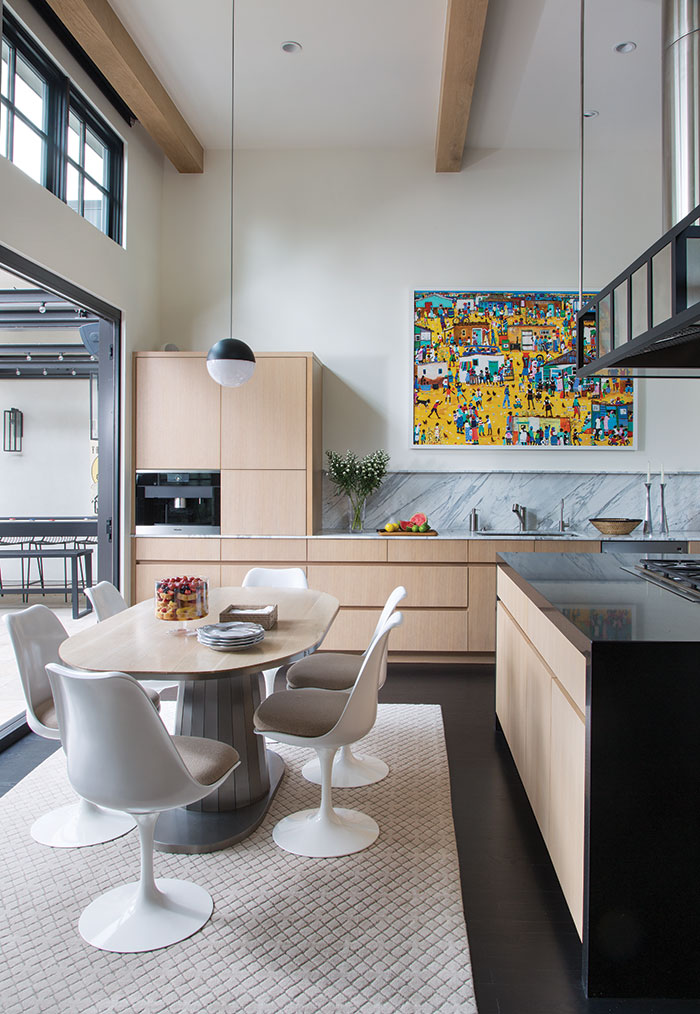 With the room’s 13-foot ceiling and large-scale stainless-steel appliances, the homeowners were challenged to warm up the industrial-feeling space. They did so with a custom-wool Tamarian rug inspired by the Mirage Collection from Shaver-Ramsey, placed under a bespoke stainless-steel and white-oak table made by Where Wood Meets Steel, surrounded by Saarinen Tulip Armless Chairs from Design Within Reach. The lighting is the String Light Round Pendant by Flos, and the honed backsplash is Statuarietto Marble from Galleria of Stone. The 2004 South African Township oil painting is by Katharine Ambrose. 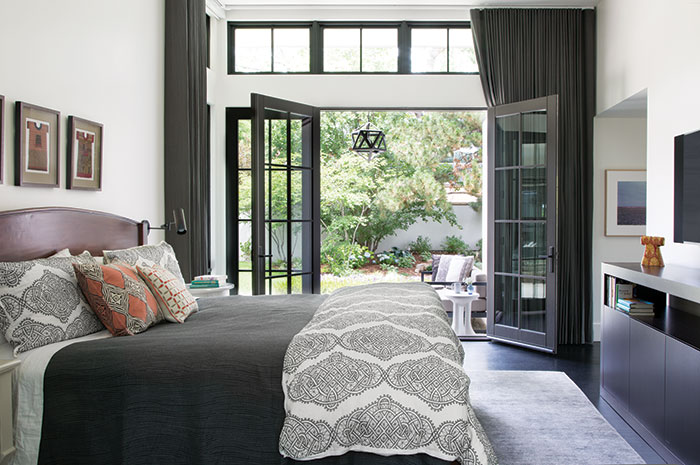 Denver’s The Brass Bed provided the master-bedroom bedding, with the Infinity design by Ann Gish on a linen duvet cover and shams, the Zona coverlet in midnight by SDH, pillows by John Robshaw, and Soprano sheets by Peacock Alley. The wool-and-viscose rug is Nettle by Organic Looms, and the TV cabinet is a bespoke ebonized console from Denver fabricator Where Wood Meets Steel. The Cylinder Swing Arm Sconce is from Apparatus. 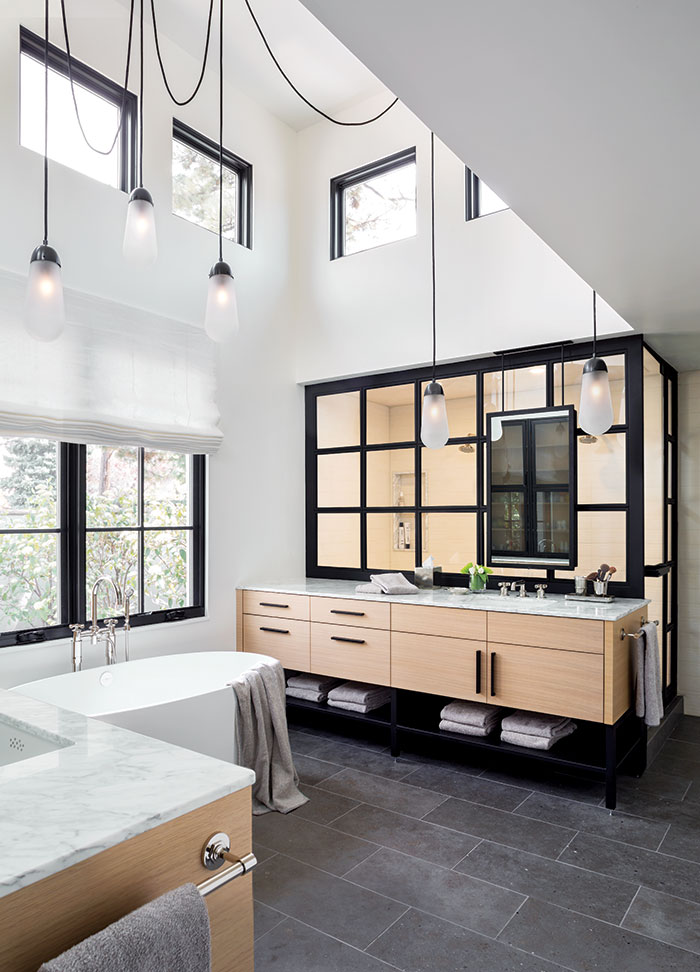 Architect Carlos Alvarez describes the master bathroom as the “most challenging room in the house” to design. The Aran Gray Honed floor tile, Crema D’Orcia Honed wall tile and Henry Collection plumbing fixtures are all from Waterworks. The tub is by Victoria + Albert from DSKB Plumbing & Tile, while a custom Lariat Pendant from Apparatus hangs above. Don Smith of Custom Welding & Fabrication Inc. built the shower wall and floating medicine cabinet, and the custom shower glass is by Euroglas Denver. 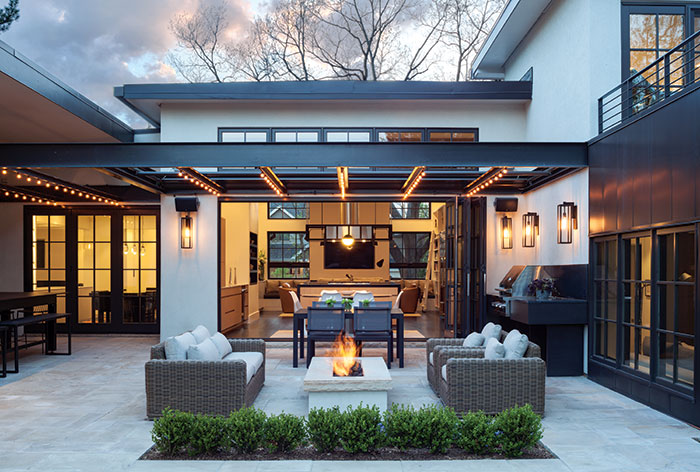 The central courtyard features outdoor wicker furniture from Restoration Hardware’s Majorca Collection. The dining area includes a table and chairs from Restoration Hardware’s Aegean Collection, with E.F. Chapman Fresno Long Sconces by Visual Comfort and commercial-grade outdoor string lights from Sival. Architect Carlos Alvarez designed the fire pit with a stucco-surround to match the exterior of the house. Not seen in this photo are two mounted cornhole boards, a beanbag-toss game with graphics from the couple’s favorite movie, The Big Lebowski.