A Home Renovation in Five Acts

HOUSE NOTES:
When Nona and Alex Feuer decided they wanted to revamp the master bath in their Snowmass Village house, they called in Aspen designer Michael Paxton. His transformation of the space from “dated Southwestern” to sleek and modern was so perfect that they asked him back—four more times.

The top-to-tail redo of Alex and Nona Feuer’s Snowmass Village home unfolded like a multiact play. 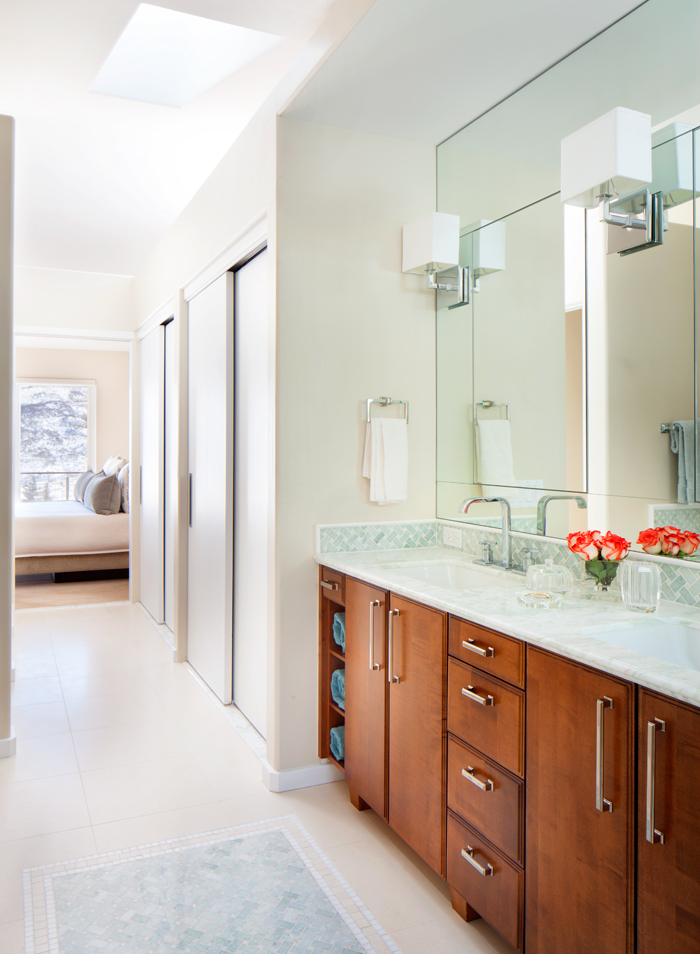 Paxton opened up the master bath and flipped the layout, putting in a large walk-in shower where the former closet was, and insetting a Ming and thassos marble mosaic "bath rug" into the floor.

ACT I:
The curtains opened in 2011, when the couple decided that their master bath had to go. The Feuers had built their 3,500-square-foot house in 1994 with little in the way of professional oversight. “We didn’t have a designer—or really an architect, either,” Nona says. “We worked with our contractor and figured everything out for ourselves.” Seventeen years later, the four-bedroom, three-and-a-half-bath house no longer suited their needs, and they’d fallen out of love with its 1990s Southwestern adobe style.

A friend recommended designer Michael Paxton of Paxton Lockwood Interior Design in Aspen, and very quickly, they discovered a two-decade-old bond: The Feuers had actually sold their Aspen condo to Paxton in 1994 when they moved into the Snowmass place. “It was a funny connection,” Nona recalls, “but we clicked right away. When Michael first came to the house, we asked him for two things: to redo the master bath and not to laugh at our master bedroom.”

Paxton didn’t laugh—but he did suggest that if they were going to redo the bath, which was choppy and not as functional as they needed, they should also update the adjoining master bedroom. “I still had the chest of drawers that I had grown up with,” Nona recalls. “I felt like, Oh my God, how can I ever get rid of it? But Michael showed us a cleaner, more modern design, and I knew he was right.”

The couple looked across the hall and realized that the bathroom used by their children (son Kyle, now 24, and daughter Hannah, now 22) could also use some updating. “The kids had painted it themselves—turquoise, because we all love the Caribbean," says Nona. "But they had outgrown the color—so we asked Michael to redo that too.” 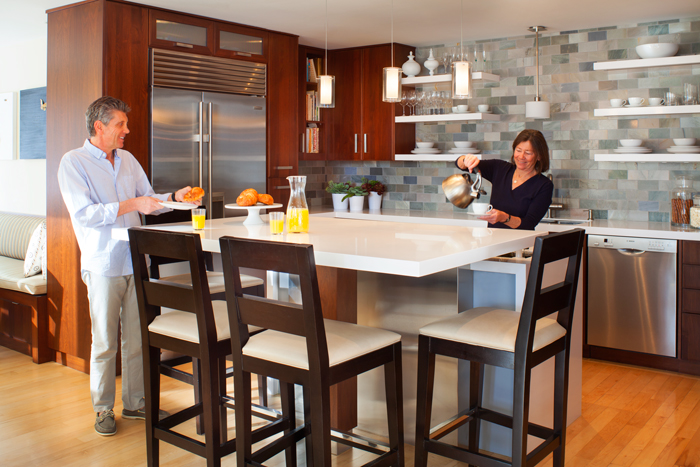 ACT II:
Paxton’s designs were such a success that the next year, the Feuers invited him back to renovate the kitchen and breakfast nook. “It was a whitewashed Southwestern style and didn’t maximize storage; I turned it into a true chef’s kitchen,” says Paxton, who also created a warm but utilitarian breakfast nook. The Feuers were thrilled. “We all love to cook,” says Nona, “and it turned out fantastic—so sleek and beautiful.” 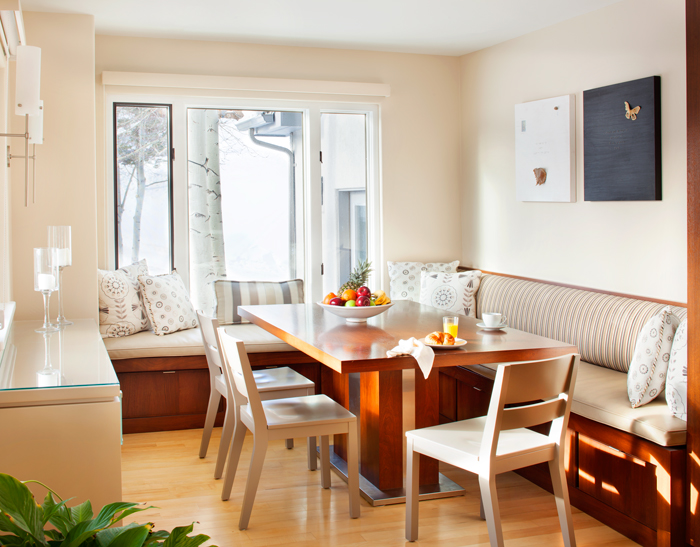 The custom table, built of walnut with stainless inserts, was designed by Paxton and built by LLH Woodworks of Brooklyn Park, Minn. Benches contain pull-out drawers for storing large items. The artwork, which contains a butterfly and horseshoe crab from Cape Cod, was created by the Feuers' son Alex. 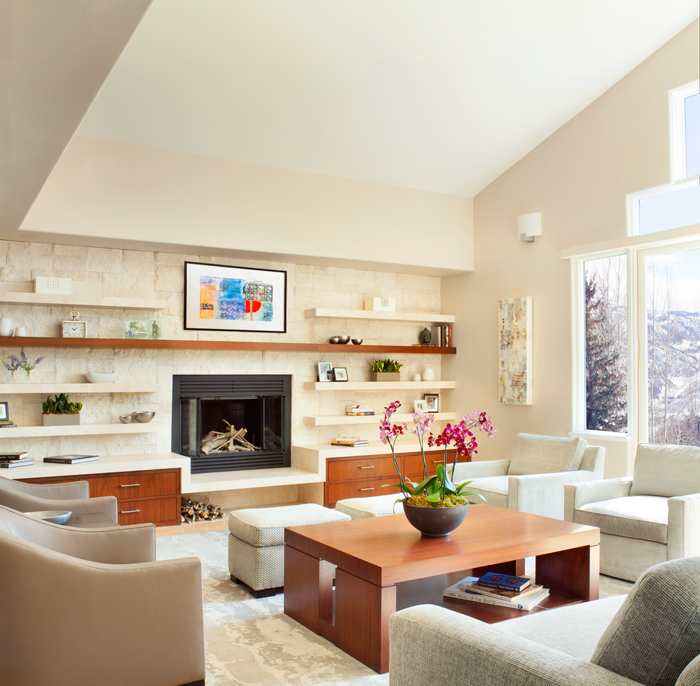 Paxton modernized and minimized the wood-burning fireplace, surrounding it with Texas limestone from Denver's Materials Marketing. Modern touches include A. Rudin chairs from TOWN and Hickory Chair chairs from Hoff Miller that swivel to take in the views.

ACT III:
The gorgeous new kitchen flowed into the home’s social rooms, which still felt stuck in the ’90s. So a year after the kitchen redo, the couple decided that a rethink of the living room, dining room, mudroom, and main-floor powder room was in order. “Every time we would do an upgrade, we would discuss things with Michael and then go away on a trip and let him do his thing,” Nona recalls. “People would say, ‘How can you leave your house in the hands of your designer?’ But we trusted him totally and knew he would do a great job. We were lucky.” With all of those rooms complete, “we thought we were done,” Nona recalls. “But then we realized that the house was so beautiful inside, we really should redo the outside so it was equally nice.”

Paxton expanded the original deck to accommodate outdoor furniture and added cable railings to create openness. He used ipe, a hearty Brazilian hardwood, for the decking and posts. A grayish Texas limestone was added around the new front door and on the tower.

ACT IV:
Paxton took a look at the “Southwestern salmon” exterior and revamped it all, replacing the oversized front door, repainting the stucco and clapboard a soft gray, adding Texas limestone as accents, and expanding the decks to take advantage of the glorious views. “We love spending time outside because we’re surrounded by a lot of green and open space,” Nona says. “It’s lovely. After that was finished, we said, ‘Okay, that’s it. This time, we’re absolutely done. Done!’” 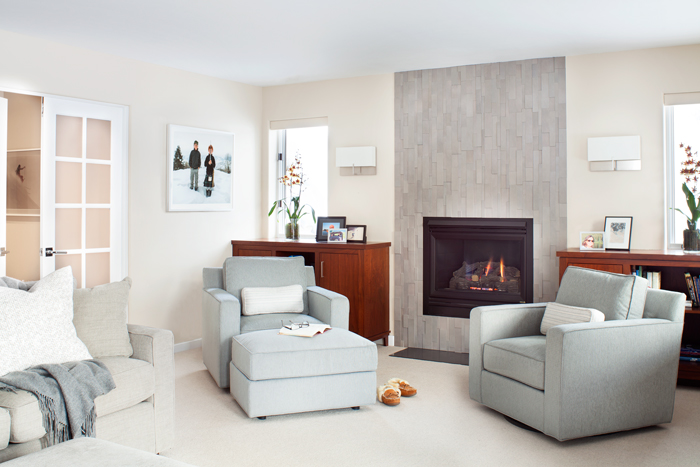 The new family room with swivel chairs from Kravet, is a favorite hangout spot for the Feuers' kids.

ACT V:
Three months later, they changed their minds. “I said to Michael, ‘Guess what? We want to do the downstairs too.’” Formerly cold and dungeon-like, it was an area of the house that the family rarely used. But for his final act, Paxton redesigned the entire space, creating a comfortable family room, which often serves as a separate social space for Kyle, Hannah, and their friends, and updating the guest bedroom and bath.

“Looking back,” Nona says, “I realize that even though Alex and I knew what we liked and disliked, we didn’t really have a vision. We needed Michael to channel our taste. Now, when friends come over, they cannot believe the transformation. It’s even better than we expected.”

Finally, they really are done. And that’s bittersweet for everyone involved. “We laugh about it, because we have become such good friends with Michael,” Nona says, “but there is nothing left to do. We’ve run out of house.” Well, at least in Colorado—Paxton is now bringing his special touch to the interior of the Feuers’ Cape Cod house. Consider it a whole new production.