A Home Inspired by East, West and Warmth 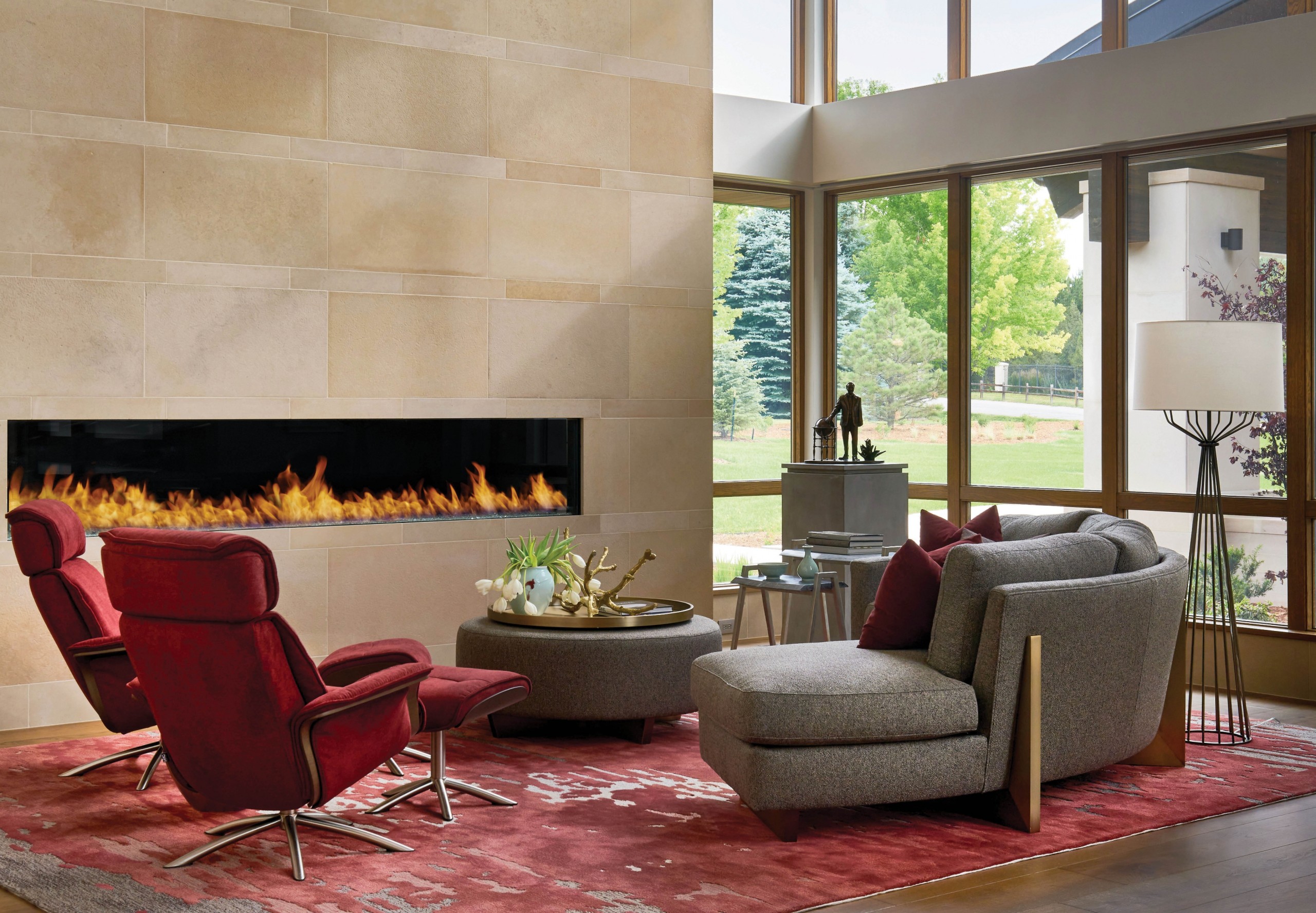 Omotenashi. Even the word sounds welcoming. In Japanese, it means “to entertain guests wholeheartedly,” an idea precisely suited to this graceful home on 1.5 acres in Denver’s Buell Mansion subdivision.

Because this is a second home, the owners, a Japanese-American couple, were in no rush, patiently working over several years with the architect, Paul Mahony at KGA Studio Architects, and the interior design team from Mandil Inc. to get everything just right, not only for themselves but also for their many guests.

“They were committed to taking their time to get what they wanted,” says Mahony, senior partner and architect at the firm. Initially, he says, the couple felt they wanted a “Colorado home,” perhaps in part because the wife grew up here (her husband was raised in Idaho). “So we started with kind of a rustic, Prairie-style home,” Mahony says. “But then they backed up and said, ‘No, we want a bit more contemporary.’ Ultimately, we ended up with a hybrid: a gracious, modern contemporary with a lot of Asian influence.”

Eric Mandil, founder and principal at Mandil Inc., and Sean Hughes, senior interior designer there, came on board in fall 2017. “We acted as art directors, making sure everything was looked at holistically and communicating that with the client,” Mandil says. “We wanted the home to essentially give them a respite,” he continues. The husband has businesses around the world, and the couple, whose main house is in Las Vegas, are very philanthropic. “Until COVID, they traveled a lot, so we wanted this to feel like they were coming home to an oasis. We tried to make it very calm, with Asian overtones. It’s a mature house, because they are a mature couple. They’re as American as apple pie, but we still wanted to honor their Japanese heritage. They also wanted it to feel warm and Colorado-ish, with earthy, grounded materials.”

It was especially important that the house be suited for guests: not only friends and family (a daughter and grandchildren live in Denver) but also business associates—there is often an entourage traveling with them. For all those visitors, the wife says, she wanted the house to feel like a “home away from home.” And it does, Mandil says: “The house is very welcoming. All of the guest rooms are like VIP hotel rooms.”

“Even though this is a second home, we treated it like a first home,” Hughes says. “We listened closely to them and got to know them. We are always very hands-on, doing showroom visits, having clients test tubs and look at plumbing fixtures and appliances in person. We like spaces to be very tailored to the people we design for.”

And the homeowners were completely appreciative. “It is a large home,” the wife says, “but it flows and is decorated so spectacularly that it still feels intimate. The architect, interior designers, builders and landscapers all worked to achieve a home that reflects who we are. Some of our favorite pieces of art are displayed, yet the house does not impede the grandchildren from running through the halls.”

“We wanted something really beautiful for them—something elegant and timeless that would honor their heritage in a sophisticated way,” Mandil says. “Doing this house also made us grow. It was a special one. Every one of the craftsmen who worked on the house did a superior job. It was like doing couture fashion. Everyone raised their game. They were all proud of it, and we are proud of it, too.”

The homeowners concur. When they returned recently after being out of town, Hughes recounts, “They said, ‘This is the best house we’ve ever lived in. We forgot how beautiful it is. Thank you.’” 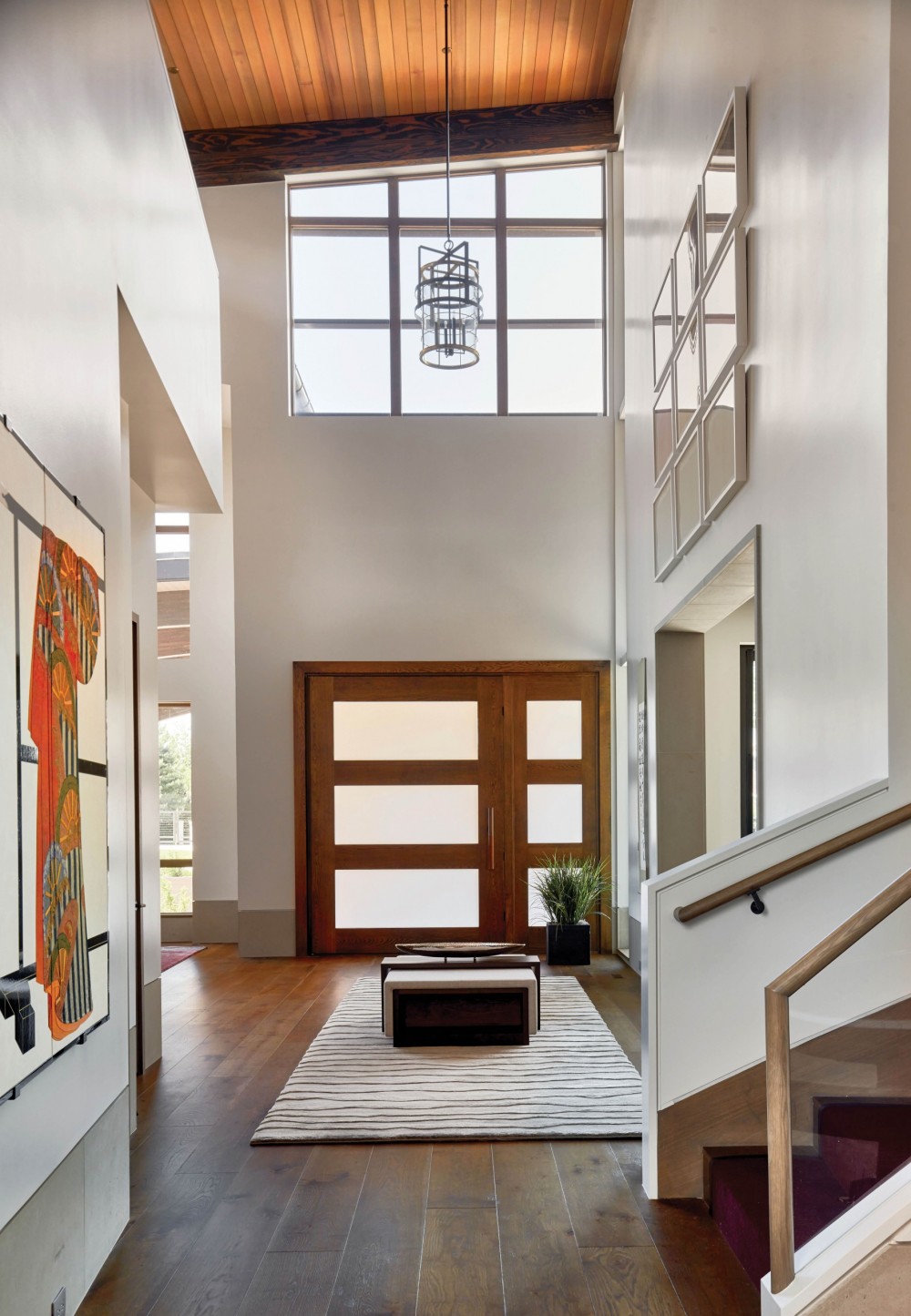 Entryway A 9.5-foot-tall, 7-foot-wide shoji-like front door begins the welcoming process. At the far end of the hall, a samurai figure (shown on page 99) from the homeowners’ collection also greets visitors. It “stands guard over the house,” Mandil says. Because the homeowners follow traditional Japanese rules of etiquette, asking guests to remove their shoes and put on slippers, the designers added a Troscan Design ottoman from Town Studio, so visitors can sit, sliding the table back and forth for convenience. The Asian-feel Beacon lantern pendant lights from The Urban Electric Co. are seen throughout the downstairs. 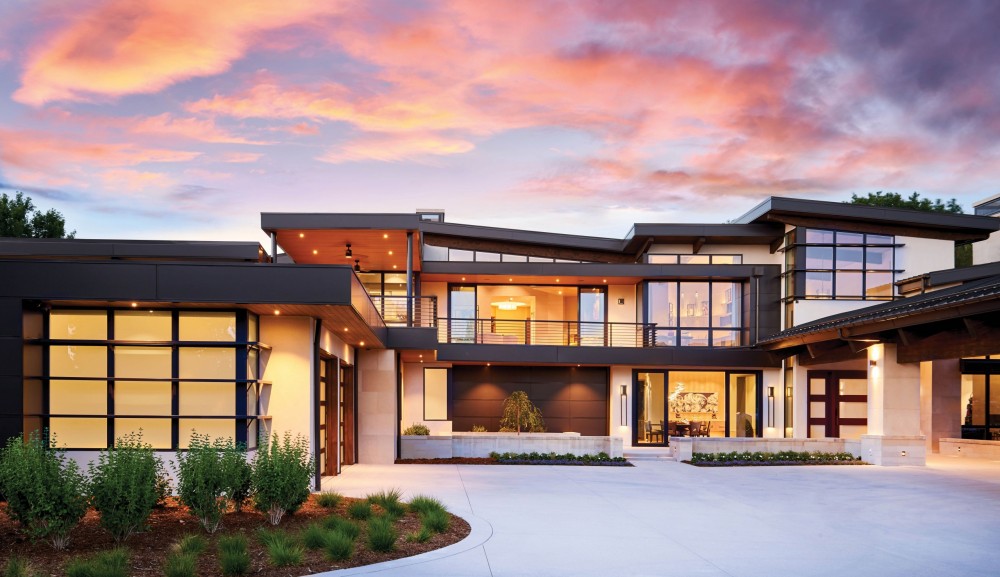 Exterior The Asian-influenced exterior is sheathed in a pewter-colored Texas limestone from Materials Marketing, stucco, and bronze-metal panels. “We tried to keep the exterior calm, with wood under the soffits to warm up the house and bronze-clad metal,” Mandil says. Guests can park under an expansive porte cochere. The massive front terrace is porcelain. 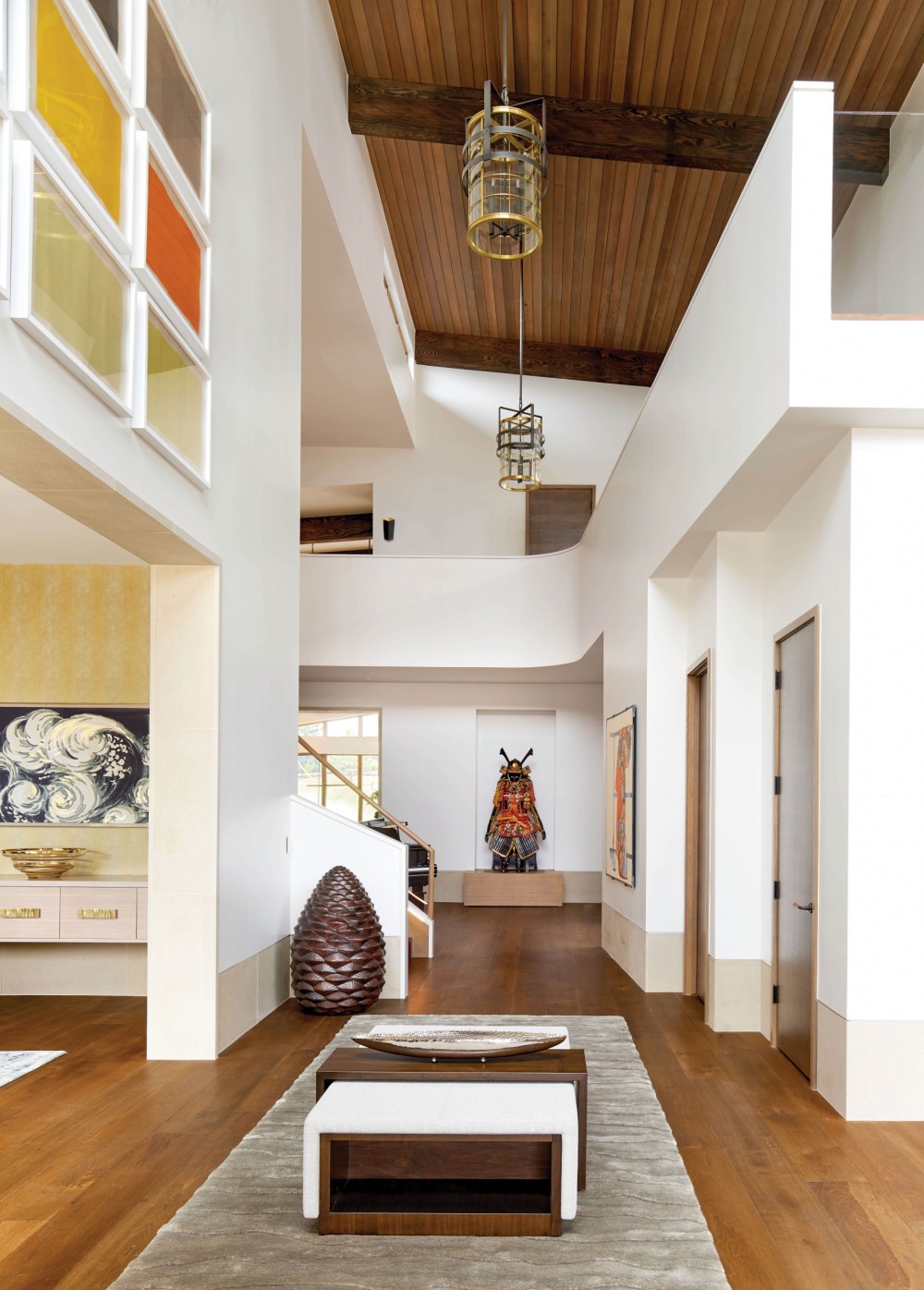 Entryway Hemlock, stained to match the oak floors, covers the ceilings. “Basically it’s a wood Oreo, between the ceiling and the floors,” Mandil says. A piano peeks out from behind the staircase, but its sound can be heard throughout the house, thanks to comprehensive home-automation technology from Harrison Home Systems in Lakewood. “The homeowners love hearing music during the holidays,” Mandil says, “and the grandchildren love it, too.” To ground it all: an 18-inch-high limestone base on the walls that runs throughout the main floor.

“We wanted this to feel like they were coming home to an oasis.” — Eric Mandil, Interior Designer 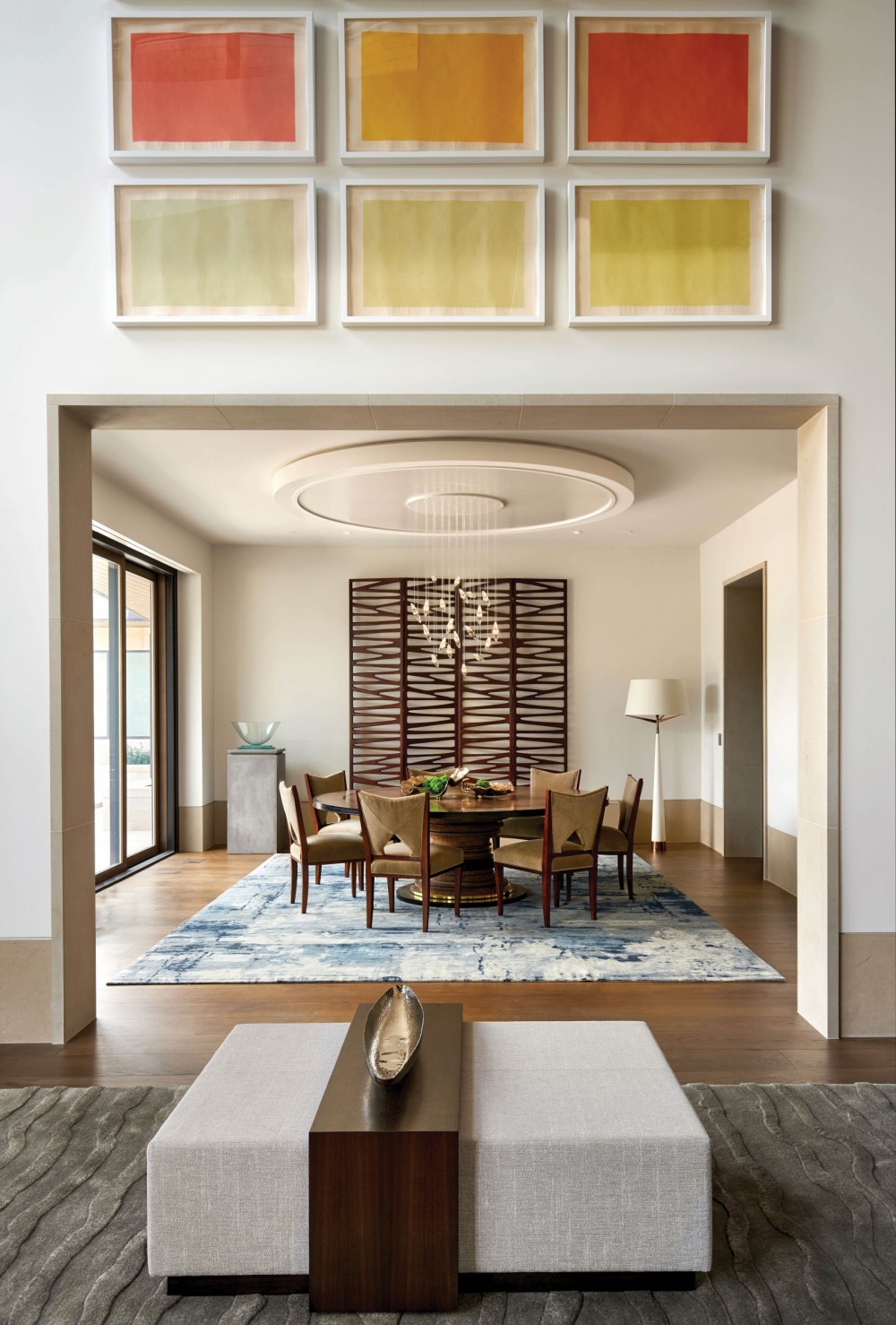 Dining Room The homeowners and their guests can dine under the stars any time they want, thanks to a circular oculus in the ceiling. “It has fiber optics in it, so it sparkles like starbursts,” Mandil says. “It can change color and twinkle, so it’s a bit of an homage to Vegas,” where the couple have their main home. Descending from the oculus is a strikingly modern Moonlight Murmation chandelier by Ochre, out of London. It sits over a round, 90-inch-diameter dining table by local furniture maker New Classics, atop a Yule Cobalt wool and silk rug by Stark, found at the CPA Showroom in the Denver Design District. On the far wall is a mahogany screen by Christopher Guy, found at Objets, on a stone pedestal. A series of nine color studies by Natural Curiosities hang above the entrance to the dining room and provide extra visual interest in the entryway. “We wanted color and something abstract in this space,” Hughes says, “and the colors almost exactly match the colors of the samurai sculpture down the hall.” 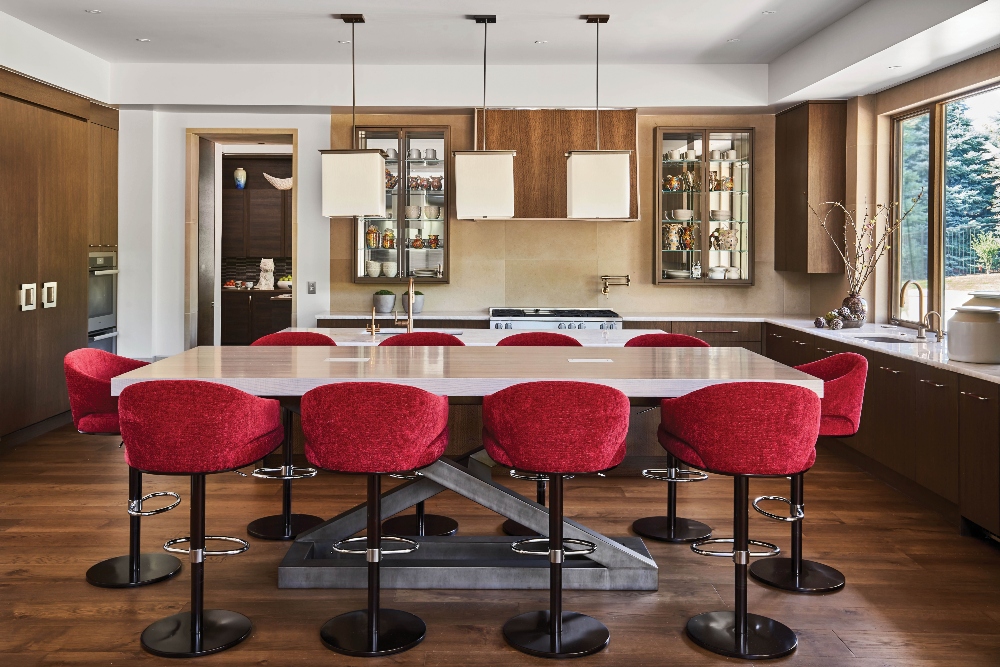 Kitchen Because the homeowners have so many guests, including work colleagues, the kitchen has two islands, one for prep and cooking, and one for socializing, eating and work meetings. “The socializing island—a custom piece with steel, crisscross legs and a thick oak top that includes pop-up USB plugs—is surrounded by adjustable Elite Modern red stools from Charles Eisen in the Denver Design District. It sits under Spalding pendants from Meyda with silk shades, which mimic Japanese lanterns. The perimeter cabinets, of oak and eucalyptus, were designed by Marcus Otten of Exquisite Kitchen Design (EKD); they are topped by Crystalo quartzite from Brazil, sourced from The Stone Collection. “The burled eucalyptus has a high-sheen lacquer, so it has a great depth to it,” Mandil says. On the far limestone-covered wall, mirrored cabinets—also custom from EKD—are recessed almost a foot into the walls. They hold dishware and assorted pieces the homeowners have collected. “They receive a lot of gifts, which they want to display to honor the people who have given these pieces to them,” Mandil says. Behind the far wall is a caterer’s kitchen. 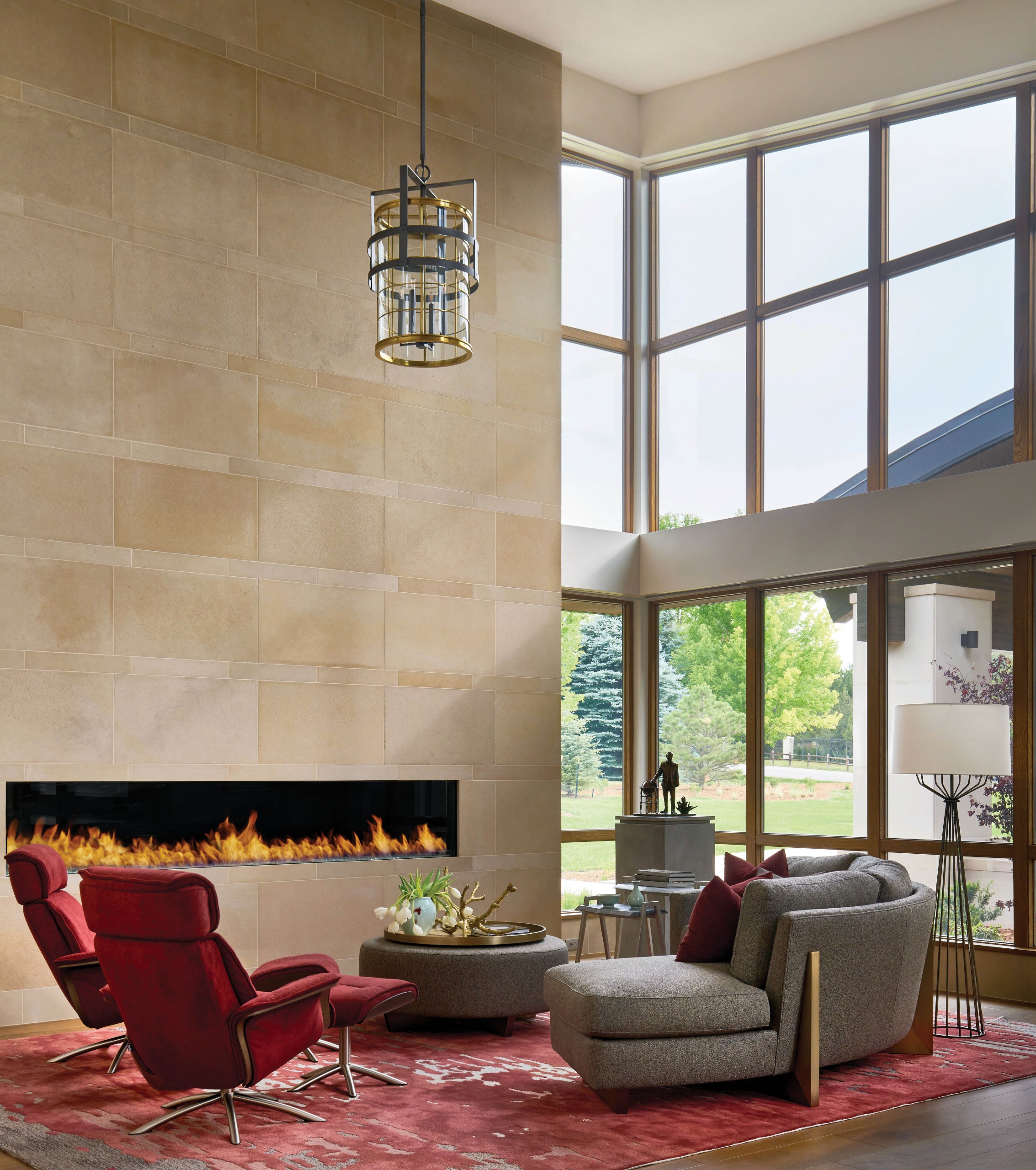 Living Room Soaring windows from Mountain View Window & Door in Denver illuminate this 22-foot-high space, to the right of the entryway. The fireplace sits in a striated limestone wall, which wraps inside and outside the house on the chimney form. “The homeowners love big fireplaces,” interior designer Eric Mandil says. “There are five: one here, one in the master, two outside on patios and a fire pit in the family room.” A taupe-colored Thayer Coggin Clip sectional and ottoman face two cardinal-red Space chairs and ottomans from IMG Norway. Presiding over it all is a miniature statue of the husband, his hand on a globe, which replicates a full-size figure that sits in front of a Boy Scout building on the East Coast to which he donated.

“When the whole house is full of people, the homeowners can retreat to the upper level and let the house run separately downstairs.” — Paul Mahony, Architect 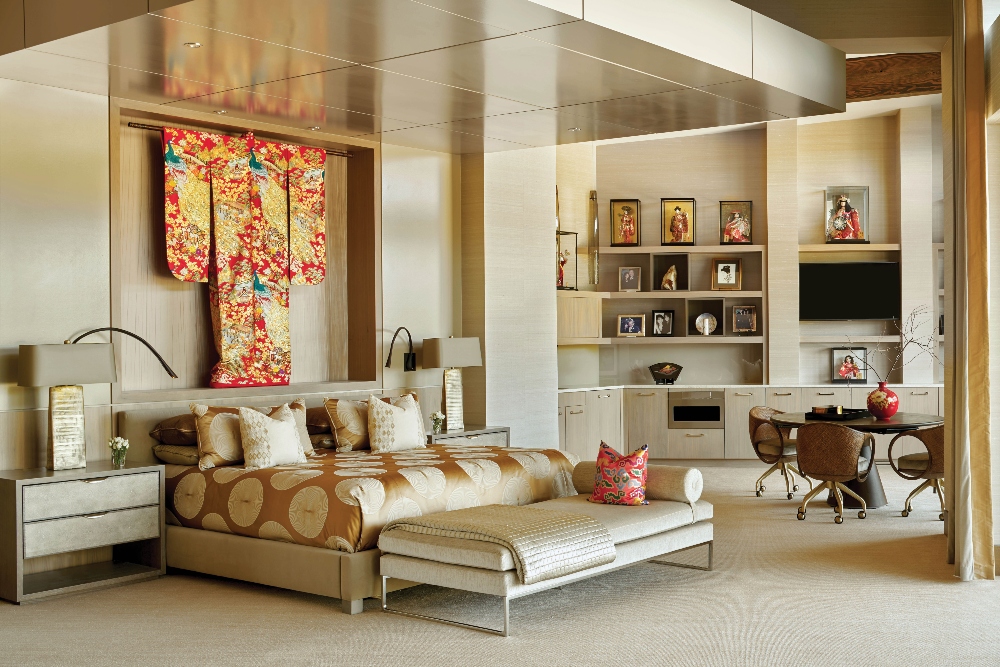 Master Bedroom The platform bed by Lee Industries stands amid a decorative surround. “There was a juncture in that room with lots of beams coming across, so for feng shui, we created this cloud to disguise them,” Hughes says. “We essentially created a built-in canopy bed.” The homeowners’ brightly colored kimono was placed in an honored position above the bed, with millwork by Sam Schuster of SJS Construction designed around it. Custom nightstands are by Jacob Levek, and the lamps are from Arteriors. The bedspread, also custom, is Larsen Tadao Camel fabric from Egg & Dart. The Nuevo Living chaise longue is upholstered in Foraker linen fabric by Larsen. “The husband likes to take naps, but he doesn’t want to nap in the bed, so that is what that chaise is for,” Hughes says. The wife likes to use the master space as her office, so in the adjoining space, we built in bookshelves and added a small conference table with a data port that pops up.” Hughes says. “But we wanted it to be pretty, which is why we used a table instead of a desk.” There’s also a morning bar with a refrigerator and microwave. 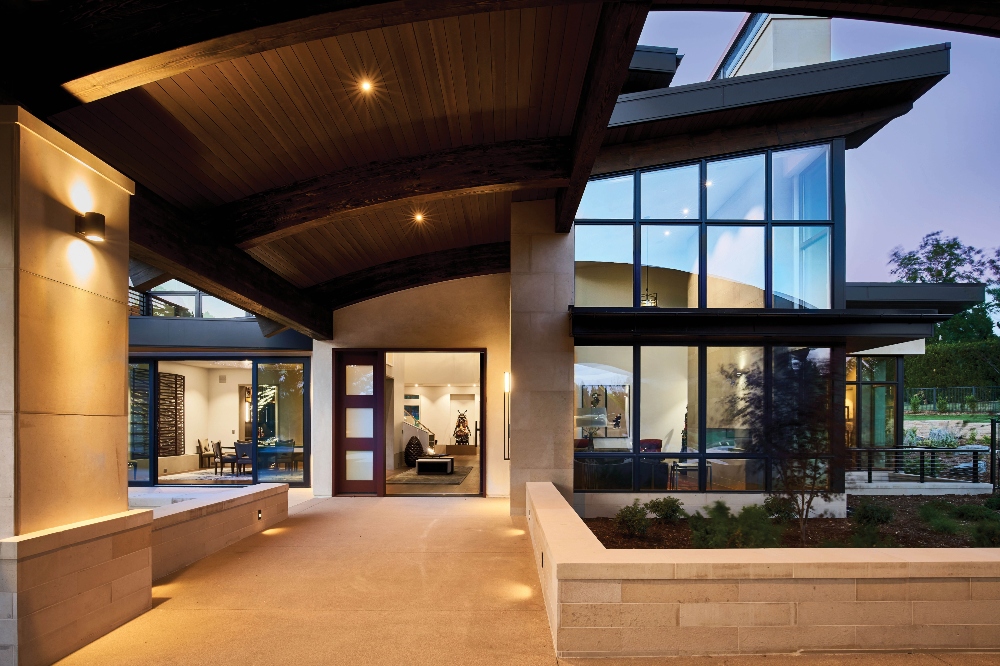 Exterior The house looks grand but still warm and intimate. “It’s important when homes get this big to try to maintain the human scale, with precisely placed details,” Mahony says. For landscaping, the homeowners wanted “some Japanese flair, including a weeping cherry tree, a Japanese maple, some bamboo and more bonsai-like evergreens,” says Troy Shimp, senior designer at Lifescape Colorado. “They wanted constant color throughout the seasons, including interest in the wintertime.”

How to Prepare Your Home for the Holidays

These Artists Create Inspired Work That Will Make Your Space Pop

A Fond, and Fabulous Farewell