A Cherry Hills Village home receives a remodel in lieu of a scrape, and the results are awe-inspiring

On the back patio, all furniture is the Amalfi Outdoor Collection by Palacek. The home, which took more than four years to renovate, is painted the same color as the original 1930s house in order to preserve the nature of the initial brick Tudor. “We wanted to save what was there,” says Paul Mahony, project architect. “We stayed true to the original style but it’s still very updated from the inside with cues from the modern age.” | Photography by David Patterson

Sometimes, sentimentality gets the better of us. For a husband and wife in Cherry Hills Village, the decision to remodel instead of scrape came down to sheer emotion. Since 2006, the couple had worked on multiple plans to demolish their house and rebuild, but a decade into the process they pivoted toward renovation instead. 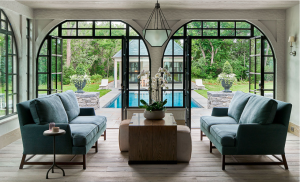 Adjacent to the kitchen is the family room, featuring sofas by Rose Tarlow in fabric by Mark Alexander Loom Atlantic from TOWN Studio in the Denver Design District. The custom hanging light fixture is from Urban Electric in blackened pewter with etched glass. The Shelter Island coffee table and pony-hide poufs are from Mulligans, and the side table is Ironware International.

The husband had cherished memories as a child visiting the home with his now-deceased father for business meetings; when he was finally able to purchase the house as an adult, the couple raised their three children there and treasured those precious moments as well. It was an arduous but relatively easy decision in the end. 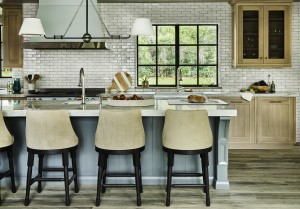 The light fixture from Urban Electric hangs over the kitchen island, with Chatwin Swivel Counter Stools by Richard Wrightman Design covered in Suede Buff by Holly Hunt. The range and hood are La Cornue, the cabinetry is by William Ohs, hardware is from Rocky Mountain Hardware, and the tray on the island is Jeffrey Alan Marks for Palecek.

With the help of KGA Studio Architects senior partner Paul Mahony, who had been working with the couple for more than a decade, a final plan materialized in 2017 that made sense both logistically and emotionally. 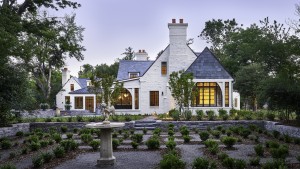 Landscape architecture firm Design Workshop came up with a plan to replace the former rose garden with a new boxwood maze and add quartz walls and steps; Designscapes Colorado executed the landscape construction. The homeowners decided to keep two existing fountains, including the one pictured. The sprawling lot is just under three acres, allowing ample space for various outdoor destination areas.

The 10-plus renovations and additions to the house over the years had led to disconnectedness, but by enlisting local builder Squibb Estates and California-based celebrity interior designer Jeffrey Alan Marks, the team was able to work in tandem to gut the home to the studs and rebuild it into the grand dame she once was.

A 960-square-foot pool house was constructed primarily as a workout facility for the wife, who is very fitness driven. In addition to the fitness apparatus, it houses a sauna, shower and pool equipment. The original grotto-shaped pool was filled in and this new one was built in a better, more public location for the family.

“The story of this house is holding on to its beginnings. It’s been worked on so much over the years, but I knew it wanted to hold on to what it was originally,” says Mahony. “We didn’t want to scrape because we didn’t want it to be something it’s not. Even though it’s much bigger than when it was built in 1931, I still see the original home in there. We were able to give it life for another 100 years.” 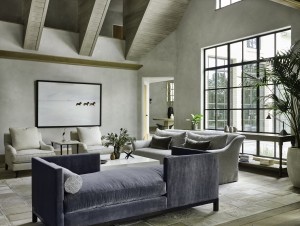 In the great room, a tete-a-tete by Jeffrey Alan Marks for A Rudin is placed next to a custom sofa upholstered in fabric by Mark Alexander in Andante Grey Mist from TOWN. The custom club chairs feature Keystone fabric by Holly Hunt in Ivory. The coffee table is by Erinn V. from Quintus, and the Rue de Seine side table is from Holly Hunt.

“It doesn’t follow a particular formula, but this is what a home should do—hold onto its heritage.” — Project architect Paul Mahoney, KGA 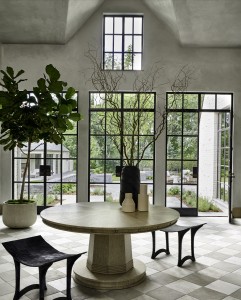 In the formal entryway, iron benches by Formations flank a round table from Harbinger in a limed gray oak satin finish. The black vase on the table is from Palacek, and the stone tile floor was sourced by Exquisite Surfaces in Los Angeles. The main floor of the house features custom Venetian plaster walls throughout.

To do so, Squibb Estates replaced all of the inner workings, including electrical, plumbing, HVAC, windows and flooring—not an easy process. “When we opened things up, we found water damage from renovations 20 or 30 years ago,” says Eric Mann, project manager and site supervisor for Squibb Estates. “No remodel is easy, but this one was particularly difficult because we had an original structure mixed with newer construction.” The team also removed previous additions, replaced the grotto-style pool with a sleeker one in a better location, constructed a 960-square-foot pool house, and moved rooms within the home for a more open and livable floor plan. 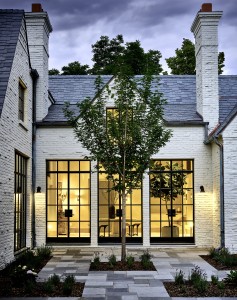 “It’s not your status quo house. It doesn’t follow a formula or recipe,” says Mahony of the 7,830-square-foot home that sits on a three-acre parcel in a historic enclave off University Boulevard. “There’s a quirky nature to these spaces, such as windows in the showers, a great room far away from the kitchen, and separate staircases for access to sets of upstairs bedrooms. It sets its own path,” he adds. “But we committed to the nature of the original design.”

“It’s still considered to be an old brick Tudor house in line with the 1930s architecture. We didn’t want to abandon the original nature of the home. We wanted to hold onto what it was in the beginning” says Paul Mahony, KGA project architect. Eric Mann, project manager for Squibb Estates, concurs. “It’s comforting and homey. It’s charming in the sense that it’s pleasing.”

Marks infused the interiors with his signature relaxed-yet-tailored aesthetic, using a neutral palette for a sense of breezy fun and informality. “They were looking for a mostly monochromatic palette. It was challenging for me in that I had to restrain my use of color,” says Marks, who has worked on multiple projects for the clients, who are based in Los Angeles. “Aside from the color, the owners let me have free rein,” he says of the interior, which he likens to a modern Belgian farmhouse with a light, airy and monochromatic European vibe. Marks used the exemplary firm Exquisite Surfaces to source reclaimed wood, stone and tile from France, Turkey and Morocco. 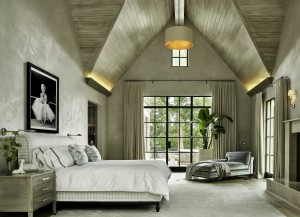 In the primary bedroom, a French mattress bed by Dmitry & Co. from Una Malan is covered in Toyine Sellers fabric, with custom bedding by Walker Valentine. The draperies are a linen weave from Otis Textiles, and the custom nightstand is crafted from light gray oak.

“There has always been an attachment to the home for [the husband],” concludes Mahony. “The couple has other homes around the world, and this isn’t even their primary residence. But while the others will come and go, this is the one they will hold onto forever.” 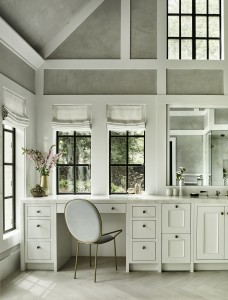 The wife’s private bathroom features the Nika Zupanc Stay armchair with velvet upholstery. The husband and wife have separate bathrooms with individual closets, lavatories and vanities. Hers is bright and light; his is dark and masculine.

After the Fire, What's Next?