“It’s a place for living, not retiring,” says a former Fortune 500 CEO, who, along with his wife, a former interior designer, went for the grand gesture with this Castle Pines manse. “At this stage, most people scale down,” she says, “We scaled up.”

With three grown children and several grandkids, the couple wanted a family-friendly compound that would also serve as a dramatic stage for the charity events they love to throw.

After acquiring the 7-acre plot with stunning vistas of Pikes Peak to the south, they spent more than three years working with architect Don Ruggles to create something deliberately unlike other homes in the area, which tend to feature dark stone and big wooden columns.

“It’s all about accentuating the view and the drama on site,” says Ruggles. “It doesn’t look like it, but the design is based on Grecian temples. Same rhythm, same set of proportions.” Among the temple treasures is a semi-subterranean showroom with a collection of seven exotic cars and an automobile elevator that displays one car at sidewalk level.

LeAnn Ostheimer of Lifescape Colorado planted the perimeter with a variety of greenery and wildflowers that blend with the surrounding forest yet give the main house a striking manicured look. The final effect is strongly geometric, and that suits the owners just fine. As the design-expert half of the couple puts it, “I wanted it to be warm and inviting but still very modern. I’m not a frilly person. I don’t like curves; I like straight lines.” 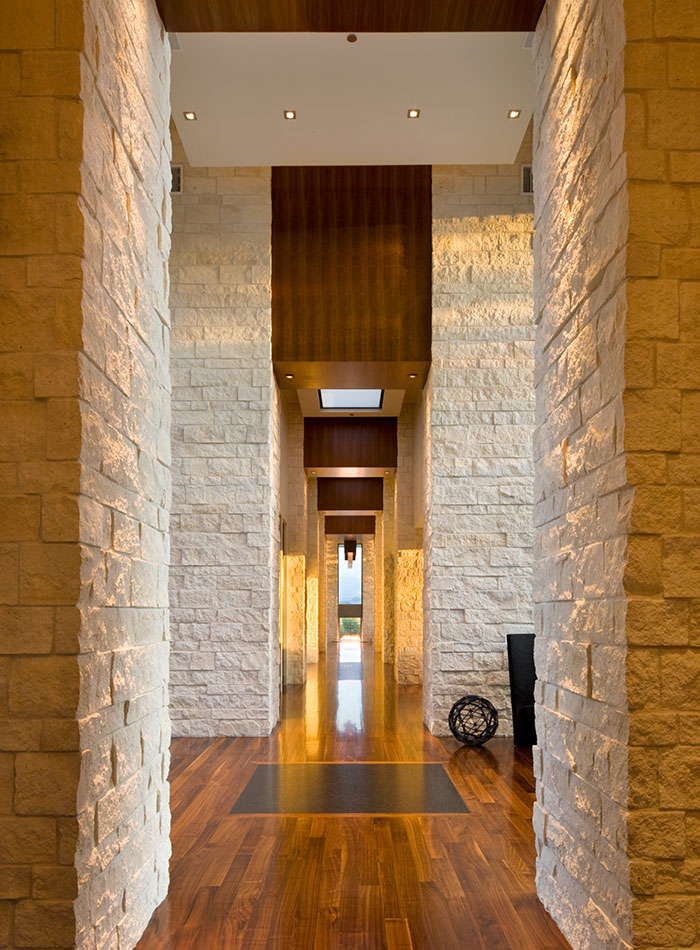 An extended gallery corridor serves as a spectacular canyon of light thanks to a series of windows and skylights. It leads to the family room at the southern end of the main house. The narrowness frames the mountain view in the distance. “Narrow spaces tend to make you walk a little faster, like water through a narrow stream,” says Ruggles. “So when you arrive at that final narrow opening for the great room, it’s like entering a pool of water. It slows down how you react to it, and you want to be there and be still.”

“The design is based on Grecian temples. Same rhythm, same set of proportions.” — Don Ruggles, Architect 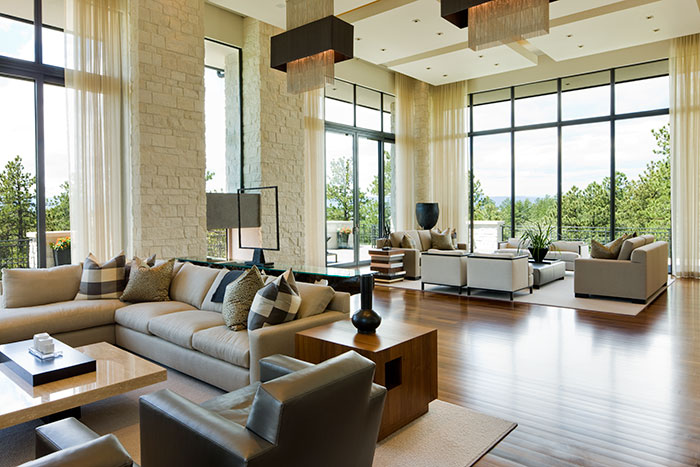 This supersized family room was designed as a proscenium for the spectacular Rocky Mountain views to the south. Massive limestone pillars extend up through the roof and outward to the terrace areas, uniting indoor and outdoor spaces. The square wooden end tables are by furnituremaker Jim Braverman. Suspended from 6-foot-long chrome beaded chains, the chandelier was created by Zia • Priven; the steel-frame windows are from renowned Upstate New York fabricator Hope’s. 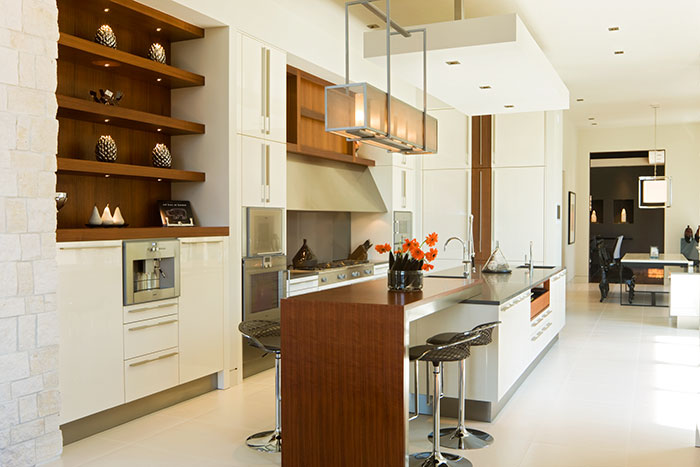 Square recessed lights in the “cloud” panel and a rectangular Hammerton five-light chandelier are suspended over the island and breakfast bar. “It’s my favorite part of the house,” says the wife, and not only because she genuinely enjoys cooking: The eastern windows offer ample morning light and a view of a tree fort where her grandchildren play. 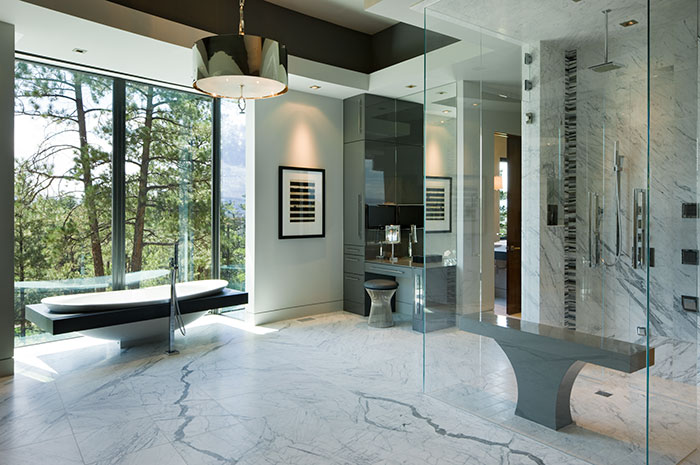 The 800-square-foot master bath includes a window-box area that frames the stone bathtub by Lacota. The glassed-in shower cube features a T-shaped, cast-concrete bench originally designed for outdoor use. His-and-her bathrooms and closets line the way to the master bedroom. 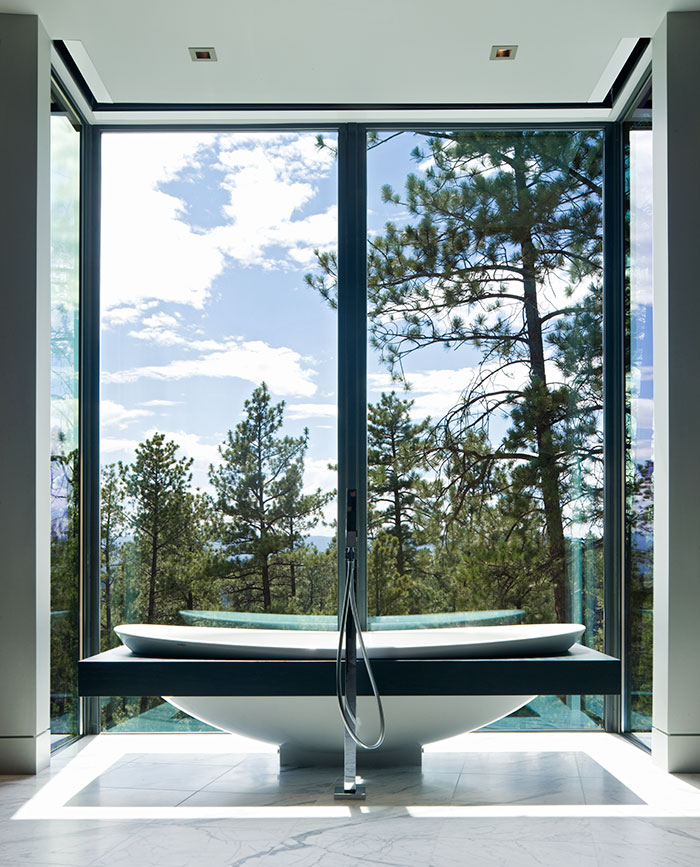 “I’d find design elements I loved for the bathroom, like the tub and the concrete shower bench, and the architect was spectacular about incorporating them.” — Homeowner 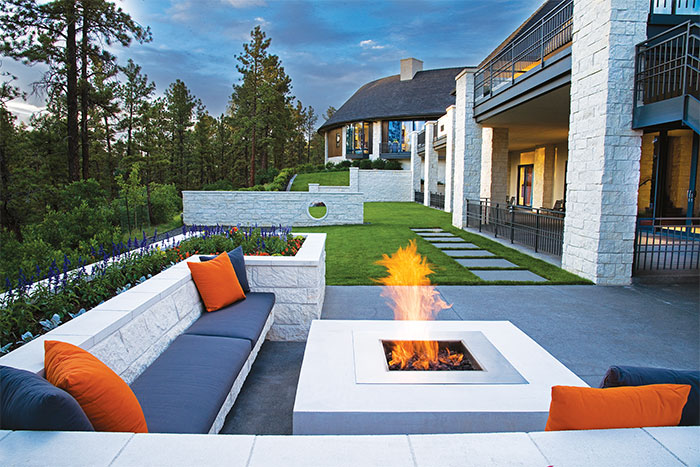 White limestone used for soaring columns, chimney-like protrusions decorative walls contrasts with the perfectly manicured green lawns in spring and summer. “The limestone has fantastic color and warmth,” says architect Ruggles. “It’s also an ancient material. It gives a sense of permanence.” The house is dominated by squares and straight lines, except for the curved area capping a hilltop straight ahead, where the master bedroom and bathroom sit. 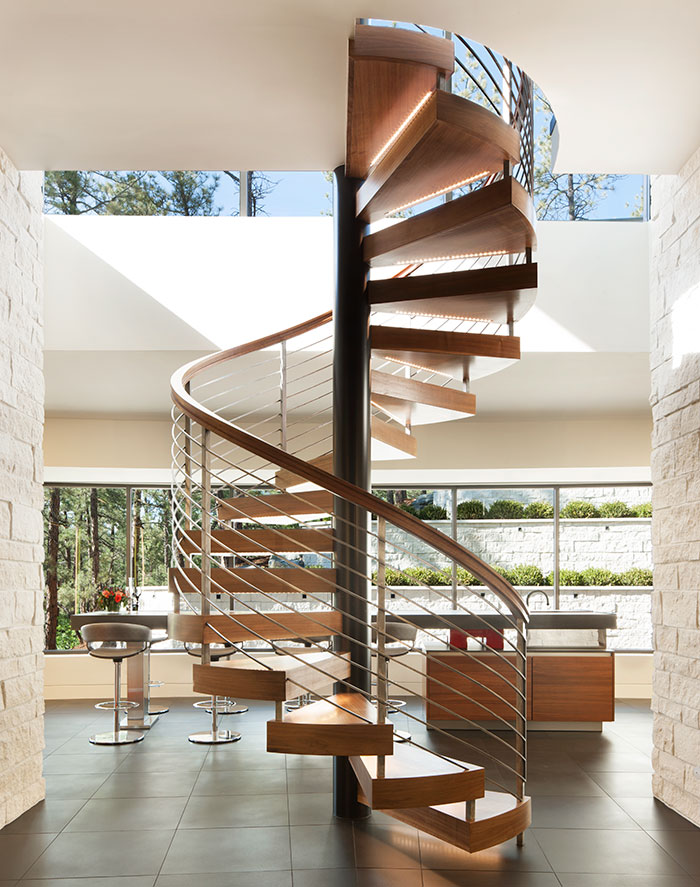 Flooded with light, this spiral staircase descends to an unexpected lair that showcases the owner’s collection of new and vintage exotic vehicles. The wedge shapes of the stairs echo the overall shape of the larger space. The same type of walnut used for the steps is also found in the wet-bar area and in the main house staircases. 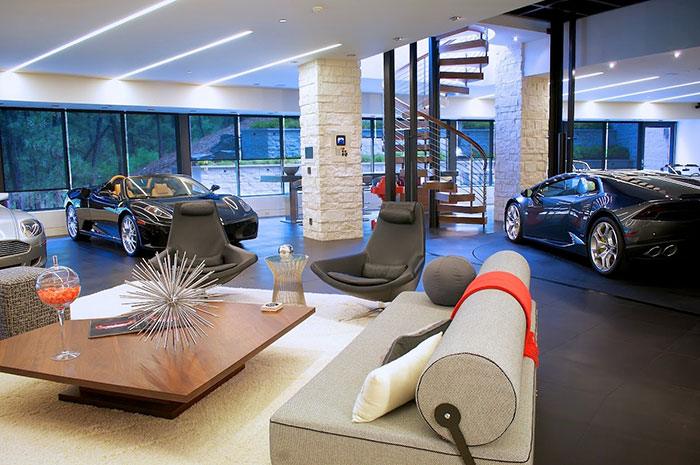 The husband’s initial idea was to use the space exclusively for car storage. But his wife, he’s happy to say, intervened. “If we were going to have this phenomenal space,” she says, “it would be so unique to be able to entertain in it as well.” Enter architect Ruggles who outfitted it with a living area, kitchen, bathroom and wet bar. The space is part entertaining spot, part guest room and part trophy room for the husband’s collection of vehicles, including a Lamborghini Huracán, a black Ferrari F430, and a peak of a gray Aston Martin DB9, pictured here. 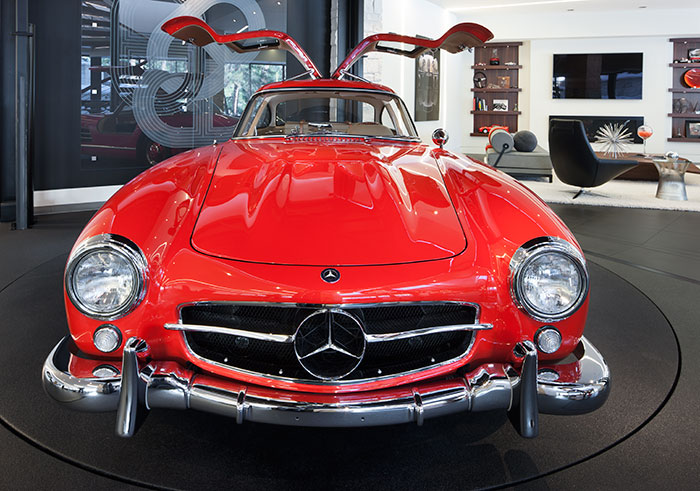 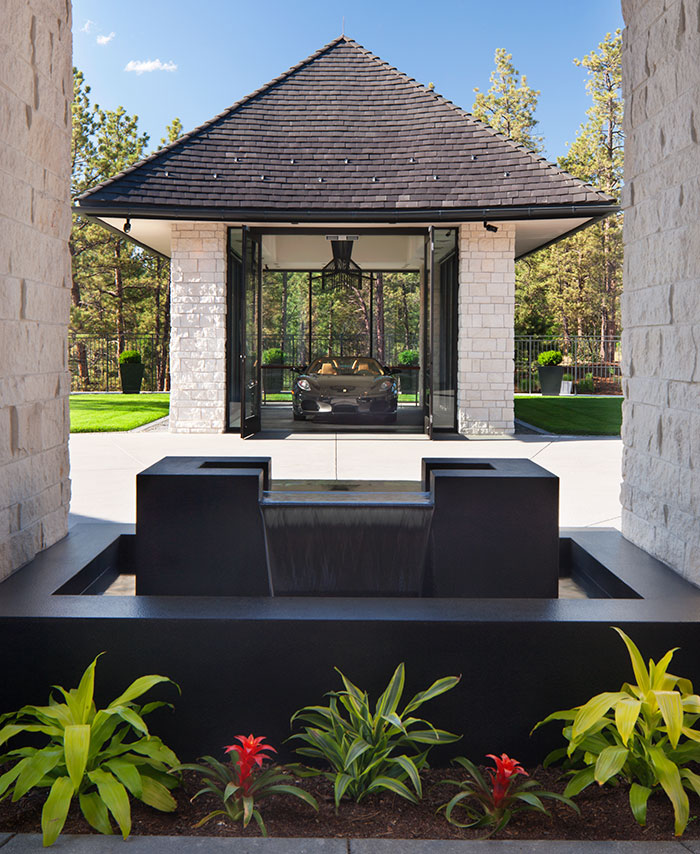 Vehicles are lifted to driveway level where the glass “carriage house” displays them until someone is ready to take one for a spin. “I like to tease my husband,” says his partner in luxury living, “that if we have issues and I need my space in the main house, he’d probably be more than happy to come over here and live with the cars.”

As the sun sets in the west, the house’s southern-facing two-story promontory begins to light up. The white limestone columns that line the interior walls of the family room on the upper deck and the recreation room on ground level are echoed in the outdoor supporting columns. The house’s large windows double as sliding doors, allowing family and guests to move freely in one extended, continuous entertaining space.