A Customized, Contemporary Haven in Aspen 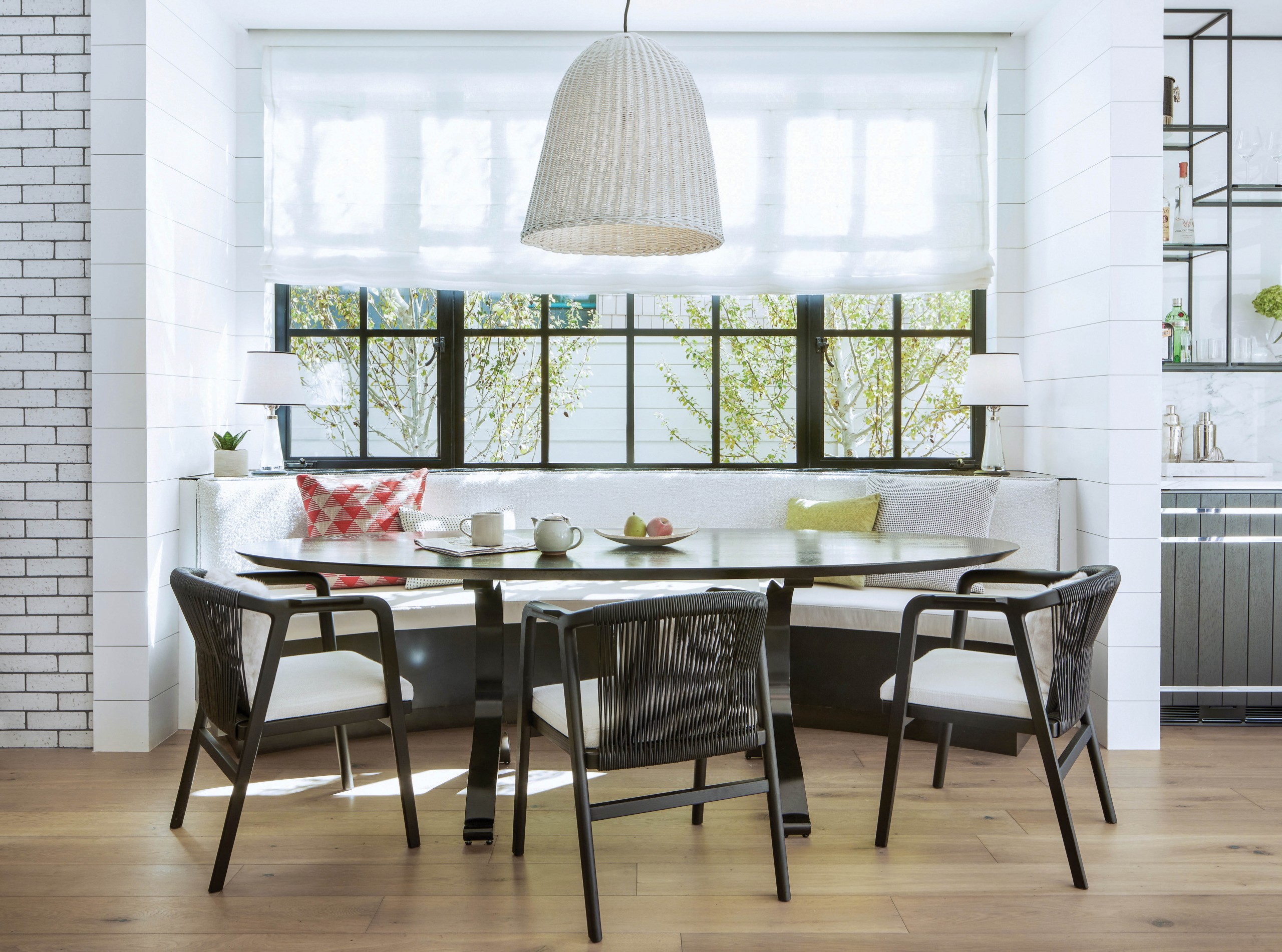 Banquette The curved custom banquette—with a vinyl seat from Mod Designs and back fabric from Romo—is modern but not stark. Atop are custom pillows from JMD, including one in the homeowners’ color of choice: chartreuse, which matches the aspens that peek in the window. The table was a team effort by the designers and Where Wood Meets Steel. The vintage-glass table lamps are from 1stDibs | Photography by David O. Marlow

When a Palm Beach couple hired interior designers Joe McGuire and Matthew Tenzin in October 2019 to take on a 6,000- square-foot, partially constructed new-build in Aspen’s West End neighborhood, everyone involved thought they were designing a vacation getaway home. But after COVID hit, the designers and the family, which includes three grown children, realized it would serve a larger purpose. 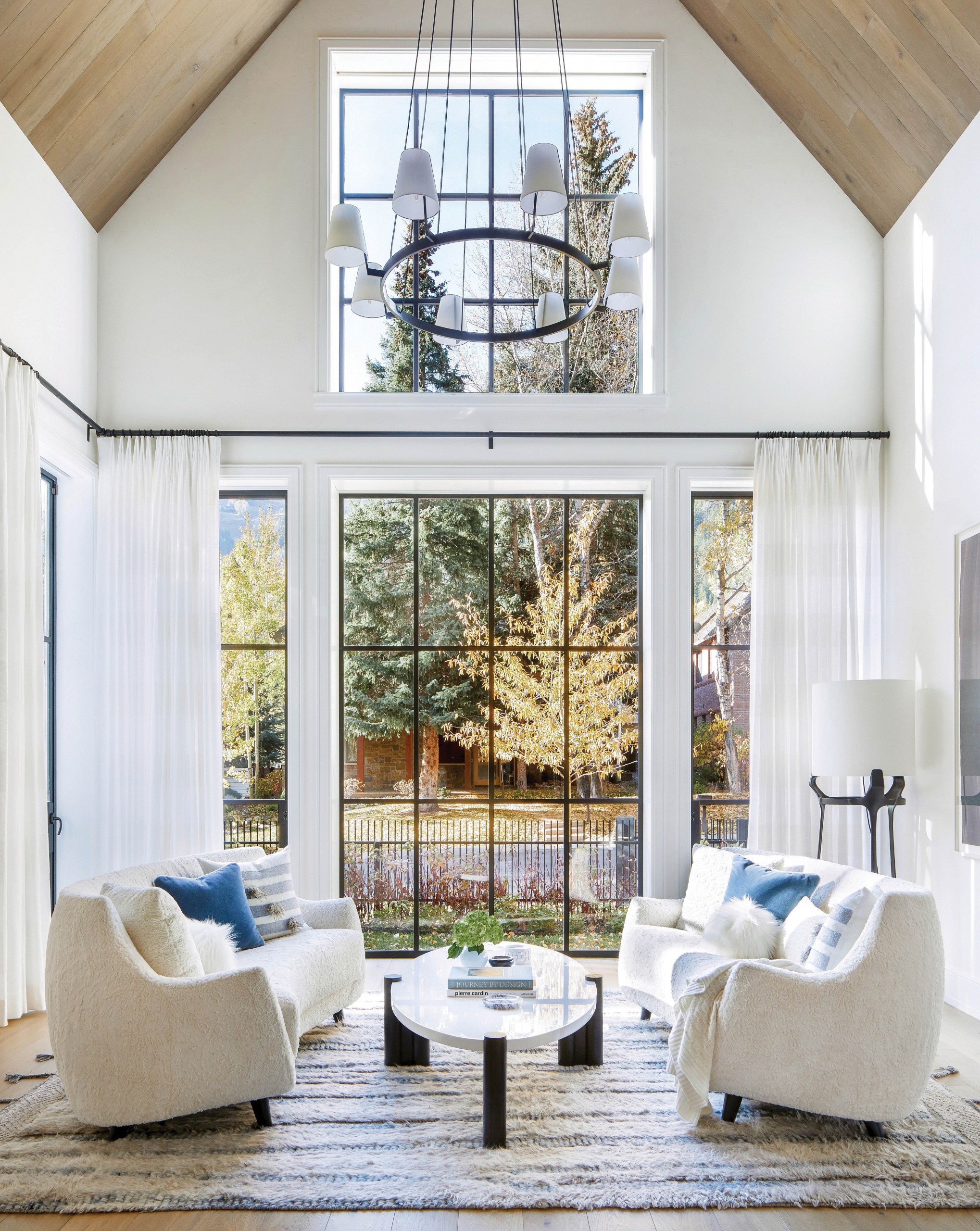 Front Living Area The home’s extra-deep sofas, including these by Studio Van den Akker, are designer Joe McGuire’s favorite part of the whole project. “The coziness of the sofas and the rugs makes me so happy,” he says. The rug is from L.A.-based Mehraban, the ceiling is stained white oak by Brenda Pringle, and the coffee table was a collab by Joe McGuire Design (JMD) and Denver’s Where Wood Meets Steel.

“When the family first bought the place, no one knew how well-used and well-loved it would immediately become,” says McGuire, founder and principal designer of Joe McGuire Design. “They planned to use it for only part of the year. But when the country went into lockdown, everyone’s plans got scrambled and it became a refuge.” 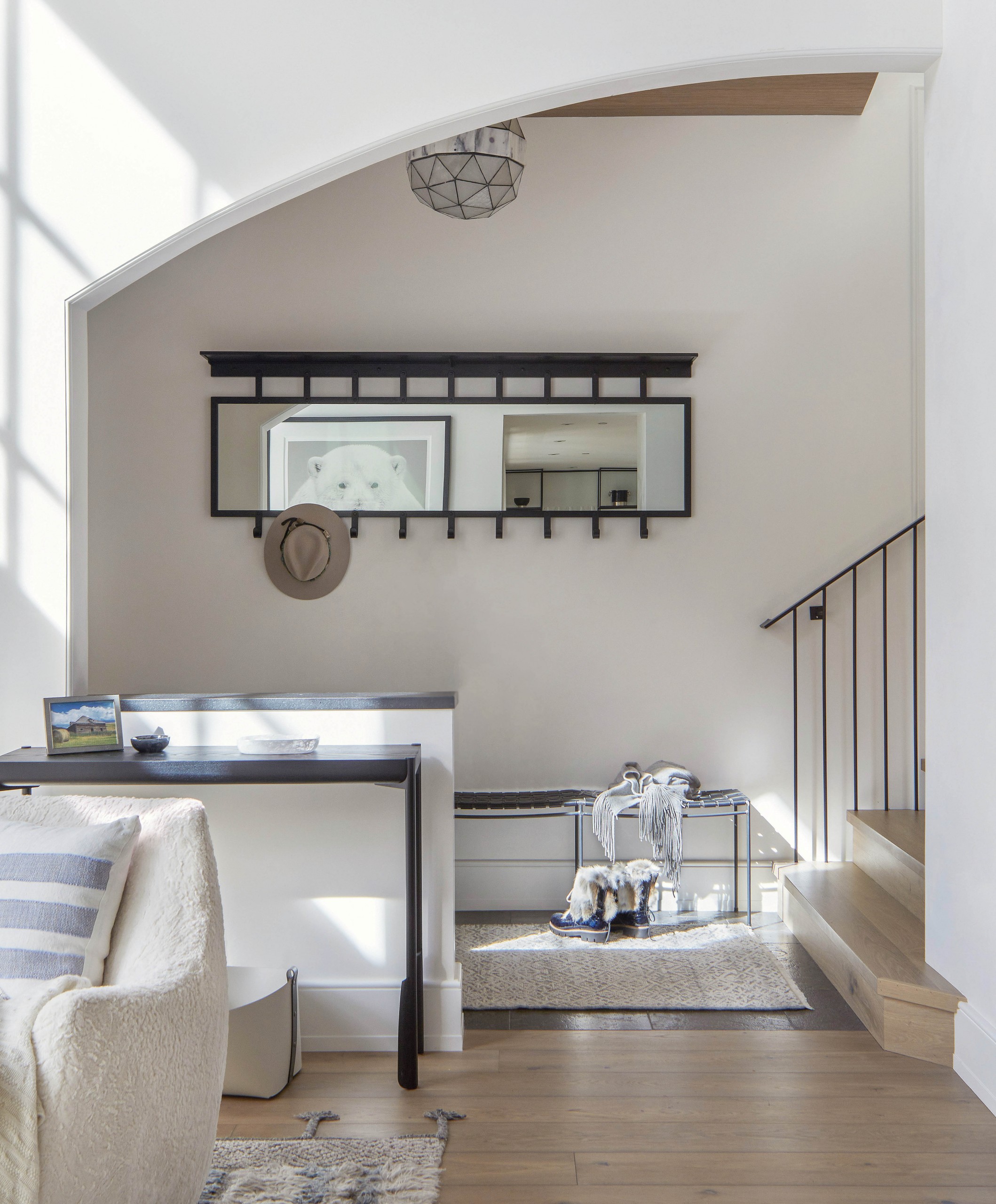 Entryway A multitasking coat and hat rack—masterminded by JMD and built by Joe Burleigh of Carbondale’s Roaring Forge—maximizes a small space and captures the reflection of The Statesman polar bear photograph by London-based David Yarrow. The bench is from Stahl + Band, and the rug is from Isberian Rug Company in Basalt.

One daughter left her L.A. high-rise; another was escaping the smoke from the fires near San Francisco. And then there were the kids’ partners and pets to accommodate as well. So McGuire and Tenzin tailored the five-bedroom, seven-bathroom home to fit. They outfitted each bedroom with a well-appointed work area, ramping up the house’s functionality. Plus, they used pet-friendly materials throughout.
They also fashioned the furniture to be ultra-comfortable. “We ordered beautiful furnishings from all over the world—very customized for this tall, athletic family,” says Tenzin, the firm’s co-owner and principal designer. 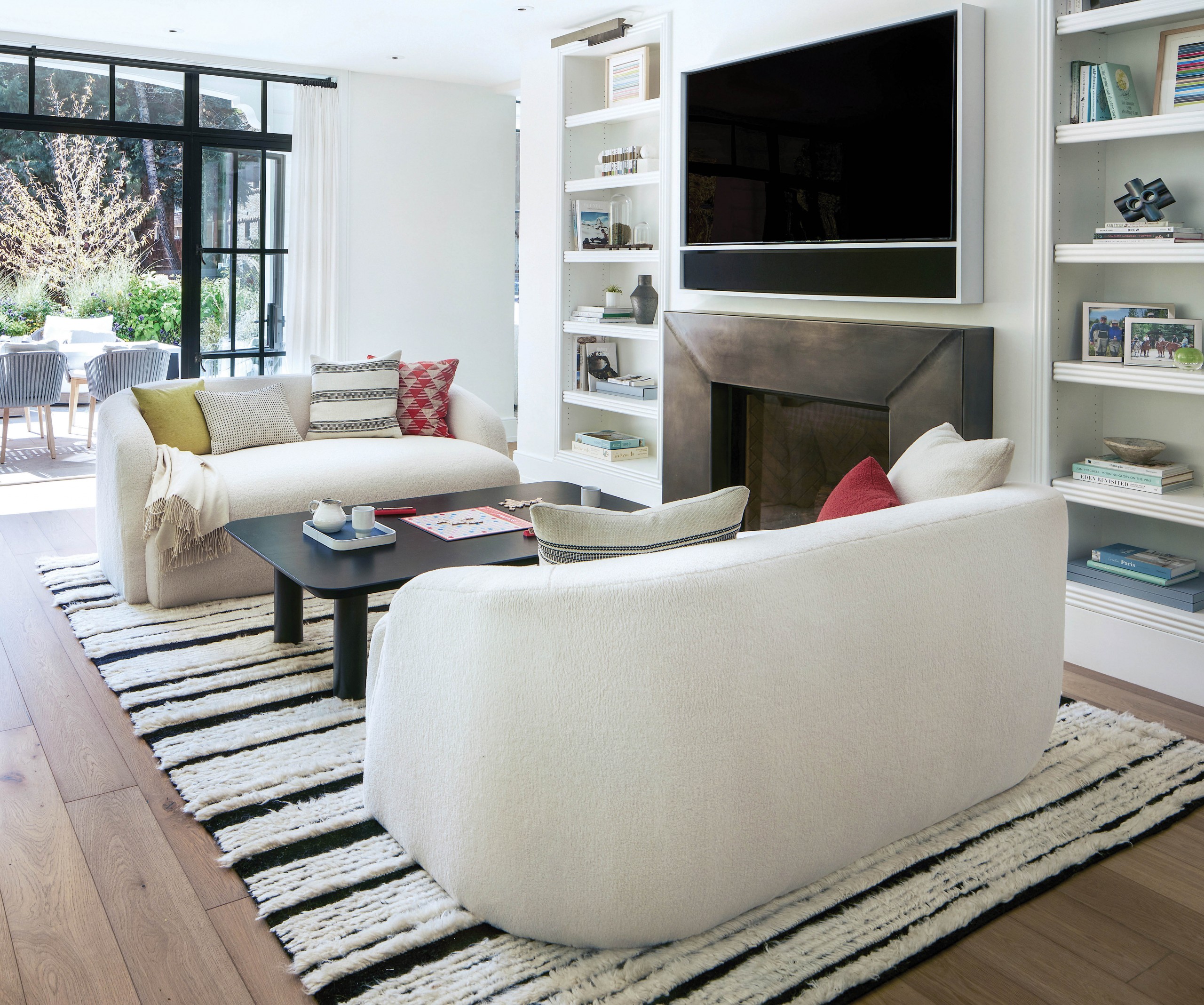 Rear Living Area A pair of ultra-comfy, curved Verellen sofas top a rug from Mehraban. The pillow fabrics are from Loro Piana, the fireplace is from Town & Country, and the accessories came from Paris Underground in Aspen.

Case in point: the coffee tables. “This client loves huge coffee tables,” Tenzin says. “We would present a table we thought was already oversized and we’d be standing there with the tape measure, and she would be like, ‘Can you pull it out farther? We need more room.’ And so they have these giant tables—which are amazing—because their whole family wants to sit around them. We kept several of the large ones in the living room light-colored, in white lacquer. We designed them from scratch.” 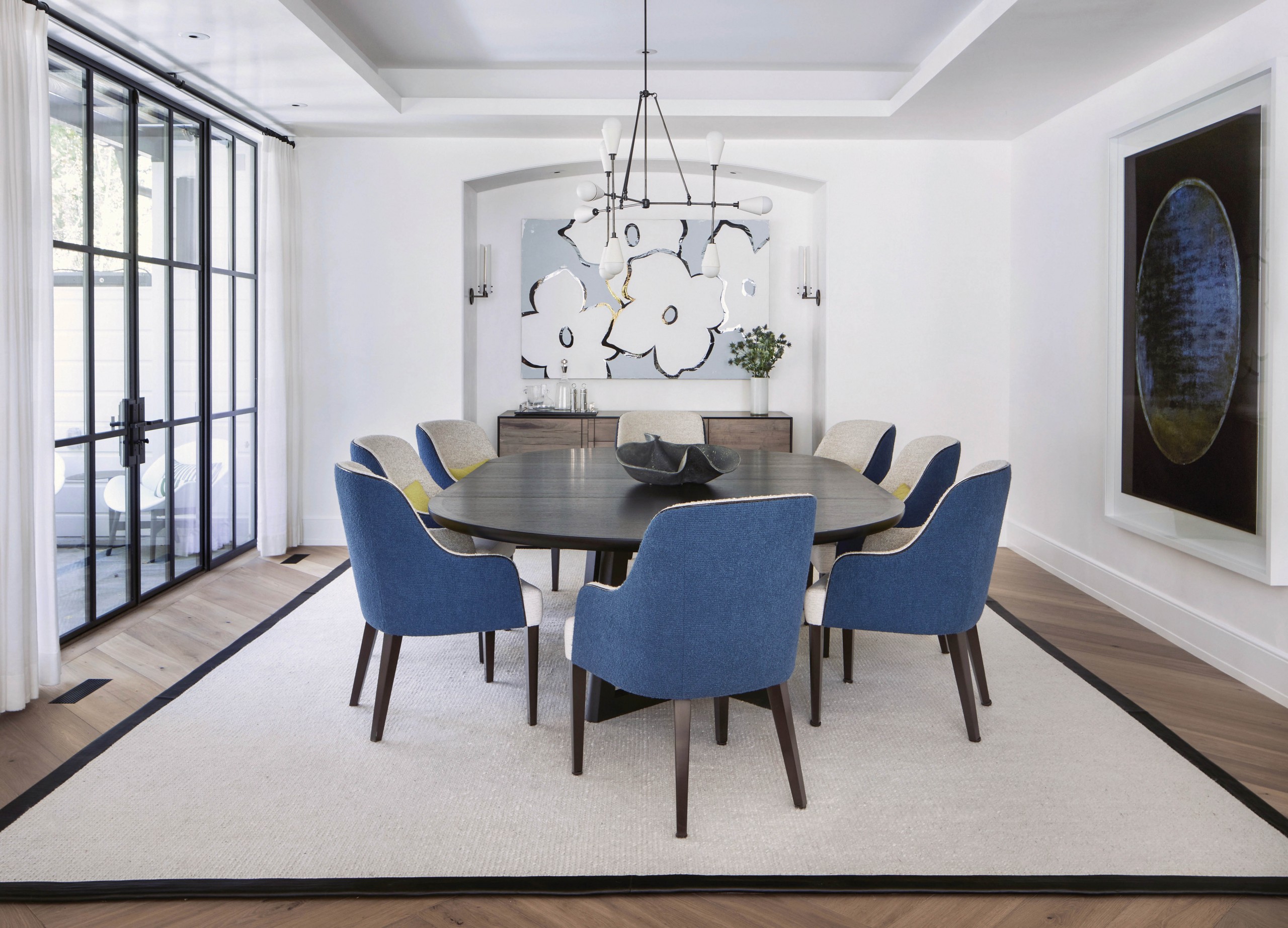 Dining Room Flower-themed artwork by Danielle Procaccio and the Lost Oval photograph by Richard Learoyd bring cohesion to the design. “The art was really important to the homeowners,” interior designer Matthew Tenzin says. “A lot of times art comes last for people—it can take years to find the right pieces. There’s no right or wrong way to do it, but it’s fun when the client is excited to buy the art during the design process, because it canreally define a room, and you can end up designing spaces around the art or using it to tie everything together.” The artwork complements the A. Rudin chairs, with blue alpaca fabric on the backs and chartreuse alpaca lumbar pillows, both by Rosemary Hallgarten.

The homeowners were very involved in the home’s design, which helped considerably, Tenzin says. “They were able to make quick decisions and were great to collaborate with,” he explains.

“[The wife] had a very distinct vision,” McGuire adds. “She loves contrast. We don’t generally do as much contrast, so that was unique for us. It was exciting, because it was something new.” 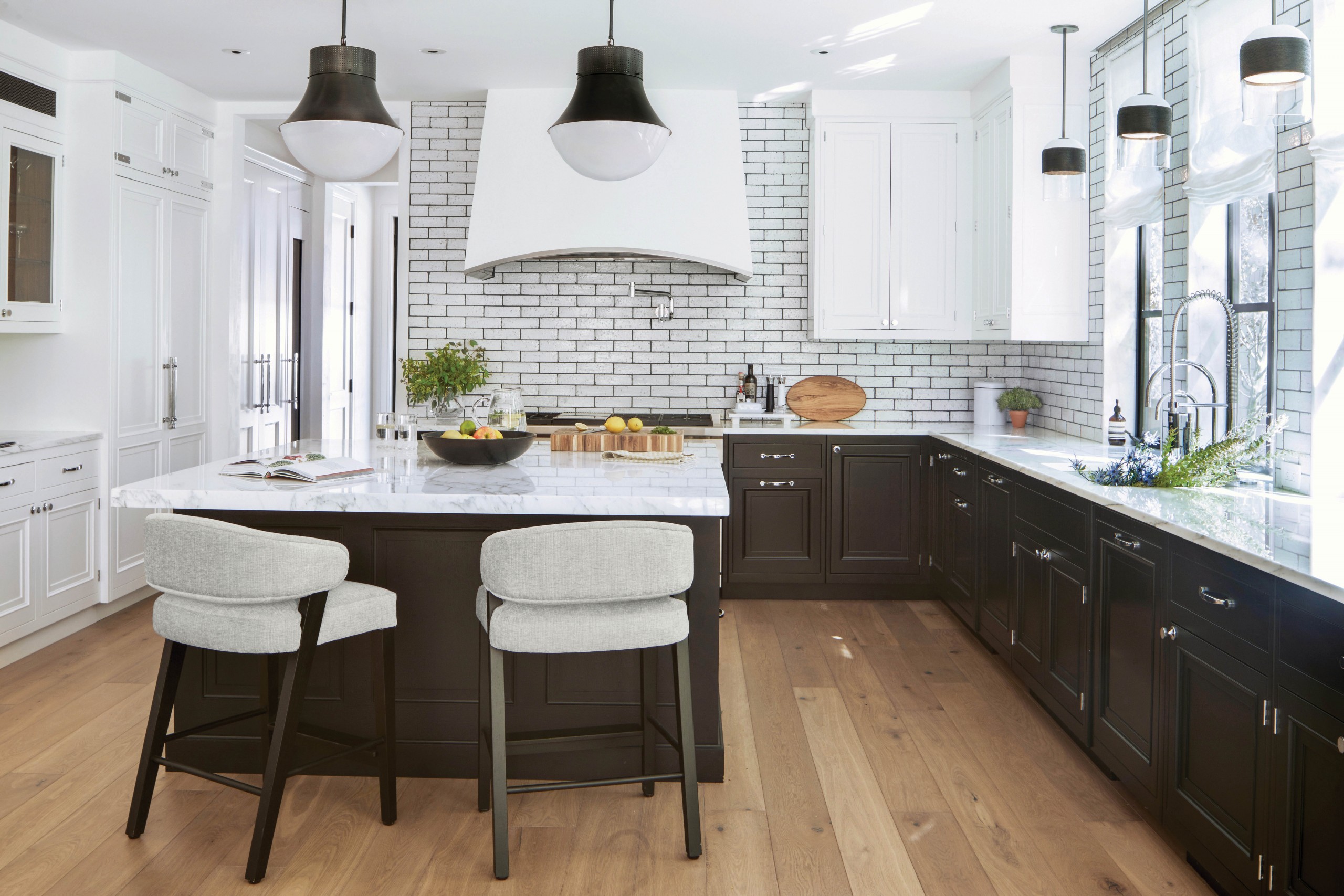 Kitchen Contrast was the theme for the kitchen, with dark lower cabinets offsetting white uppers, both from Waterworks’ Belden Collection, with Roadster hardware. The Calacatta Caldia countertops and Grove Twenty subway tile in Bliss are also from Waterworks. Kelly Wearstler pendants hang above the island, while Articolo pendants preside over the sink. The faucets are from Dornbracht, and the stools are custom.

The client had a specific color palette in mind: white and black, along with chartreuse and jewel tones for flashes of color, Tenzin says. “We fell in love with chartreuse while working with her,” he explains. “It was so cool to see how it related to the vivid spring green that would come out on the aspens and the hills. Then in the fall it even related to the changing colors of the leaves.” 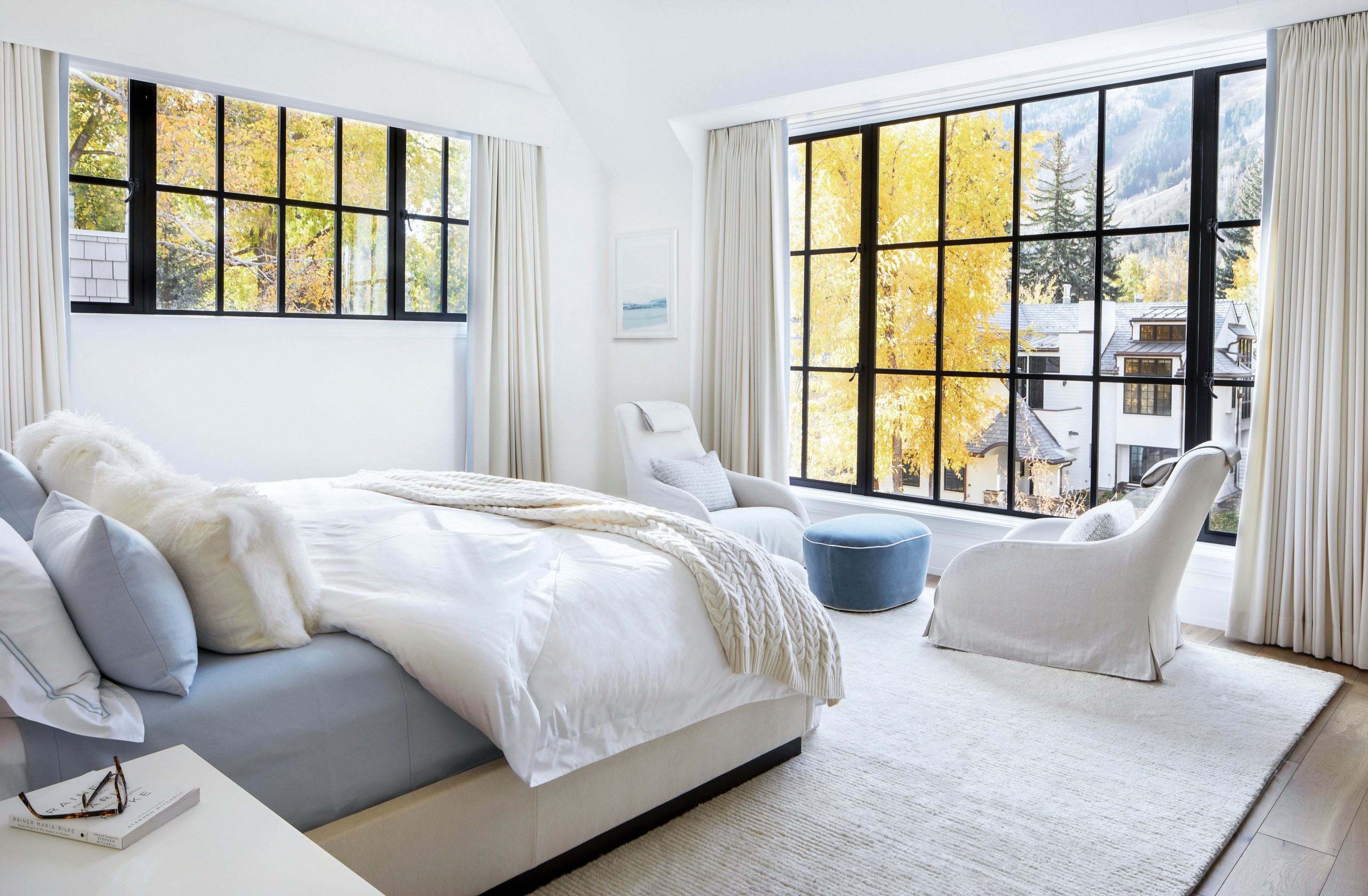 Master Bedroom With its view of Aspen Mountain and luxurious layers of texture, this room is Tenzin’s favorite spot in the house. A Lancaster bed in angora mohair rests under Loro Piana linens and accent pillows from Paris Underground. B&B Italia chairs flank a custom ottoman, built by Rooster Socks Furniture in Denver. JMD designed the drapes, which are in Loro Piana fabric and made by Aspen’s Living by Design. The cashmere rug is from Mehraban.

McGuire and Tenzin succeeded in pulling together a gorgeous, holistic and homey design—just in time for one of the daughter’s June 2020 wedding, which because of social distancing guidelines, had turned into an intimate family gathering, with other guests on Zoom. 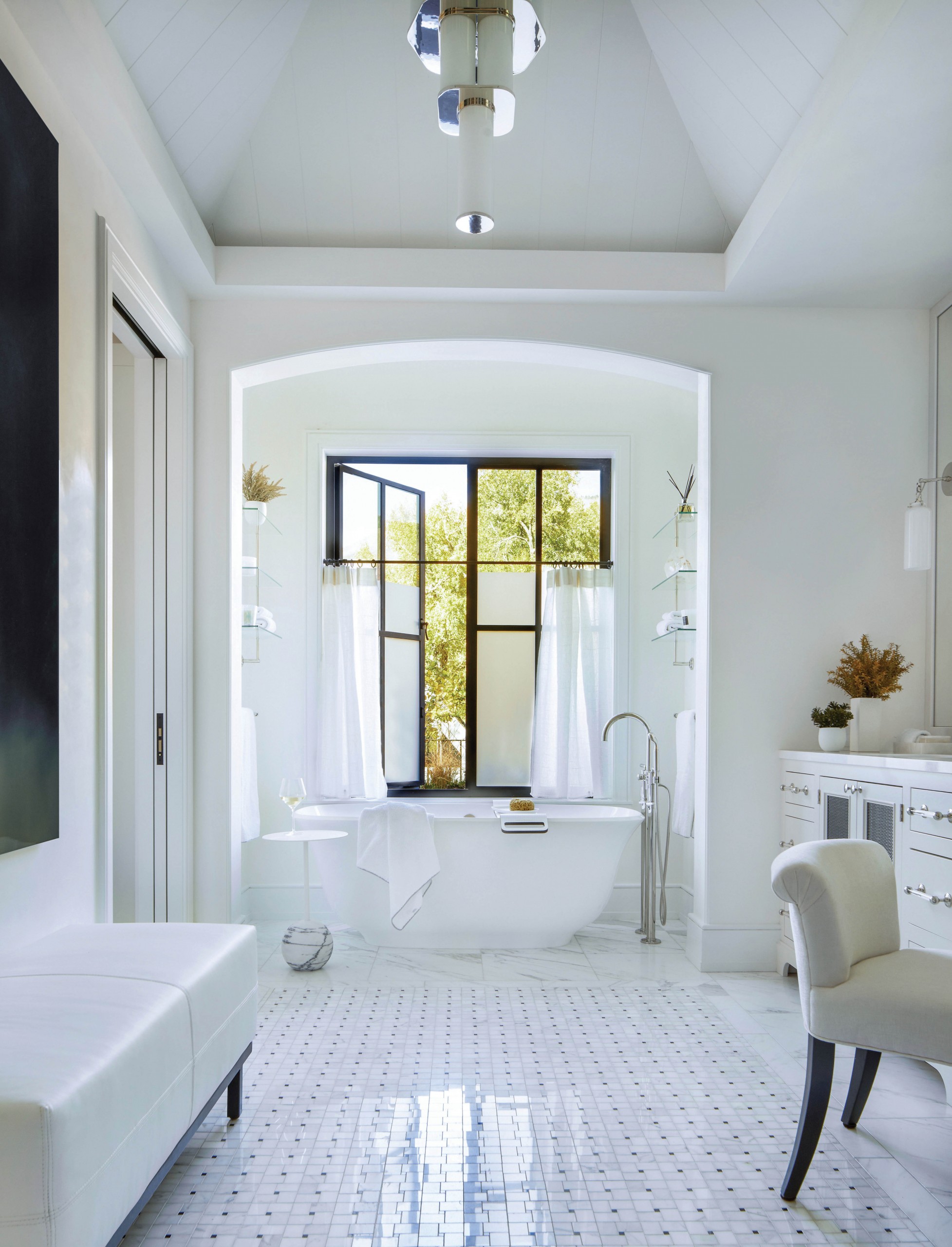 Master Bath This serene room overlooks a private balcony. Waterworks provided the tub, cabinets, hardware and faucets, and JMD customdesigned the bench. The floor is Calacatta marble, and the chandelier is from Roll & Hill.

The feedback the designers consistently received, McGuire says, is that the house was not just beautiful—it was also livable. “As designers, that is our highest priority. A home may be beautiful or impressive, but what’s the point if it’s not livable?” 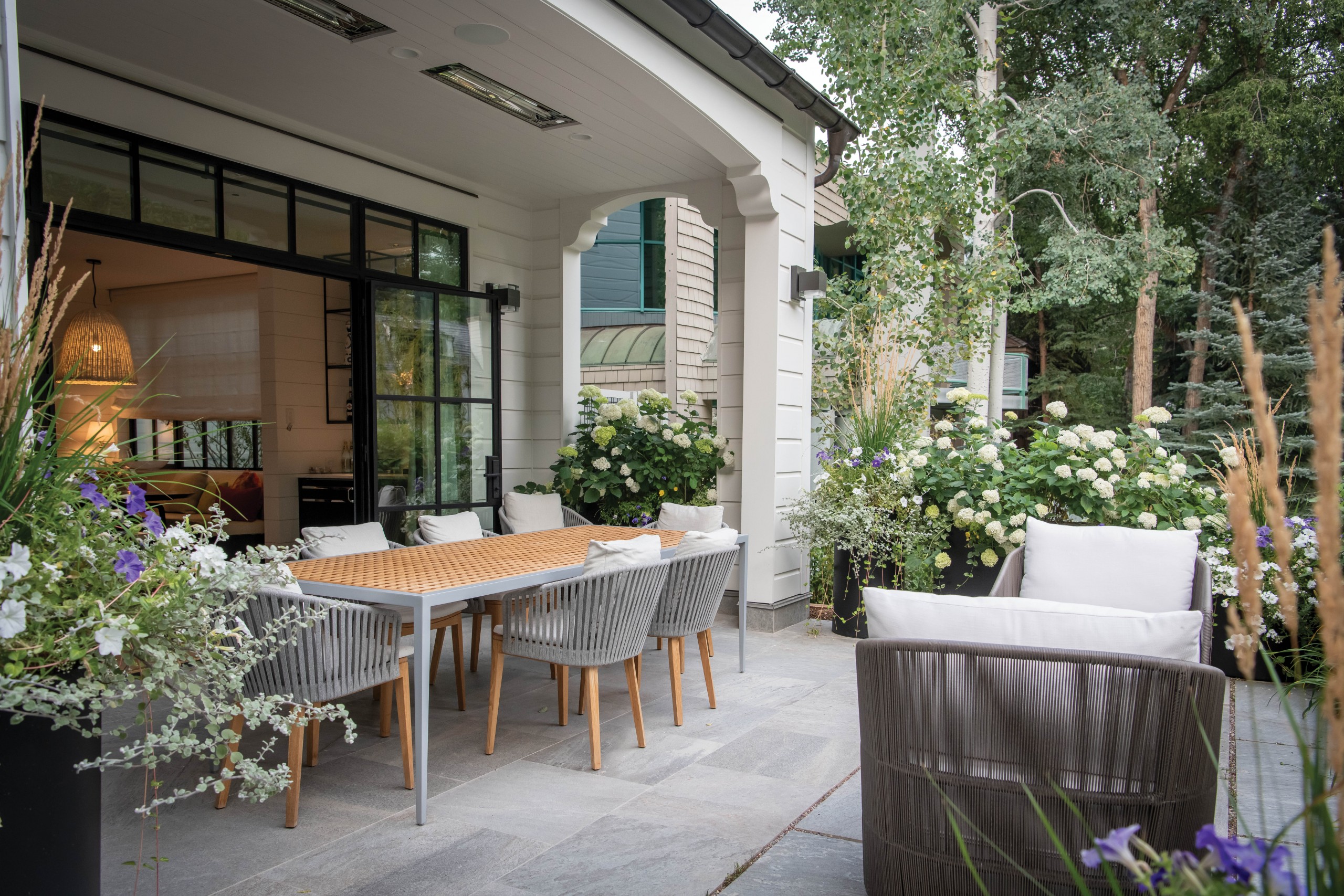 Rear Exterior Landscape architect Mike Albert of Design Workshop surrounded the patio with abundant flowers, making it a woodland-style getaway, right in town. The dining table and chairs are from Janus et Cie, and the sitting chairs are from RH.

McGuire and Tenzin also made it a point to complement the home’s architecture rather than compete with it. “The architect [John Galambos of Galambos Architects] put in so many wonderful, elegant details that are simple and somewhat subtle, like the curves and corbels throughout the home,” Tenzin says. “John’s design has the elements of a classic or Victorian home—like the others in the neighborhood—but then it’s pared down and simplified, which makes it contemporary, but less harsh, less severe, more inviting.”

Front Exterior The original vision: a contemporary take on a classically styled home in a neighborhood with rich architectural history, says architect John Galambos. Mission accomplished. “Steeper roof pitches with classic proportions are softened with a bit of whimsy, like the swooped eaves and arched openings,” he explains. Mike Albert of Design Workshop gets an assist for the compelling and complementary landscape design

And inviting does seems like the ideal adjective for a place full-up with family who are in no rush to abandon their large coffee tables and head out, finding, instead, plenty of reasons to settle in for a while.