A designer dad creates a Denver estate with a fresh twist

“My then 9-year-old could order sushi in Japanese but couldn’t ride a bike,” Jim Taylor explains about his move from the highly social, bustling Highlands neighborhood to south suburbia. But for Taylor and his wife, Julie, it was an exciting paradigm shift. “I was looking at houses in Cherry Hills Village, and people were riding horses and jogging on trails. It looked like they were all on vacation,” he remembers. “Everyone was so relaxed.”

So, in 2016, the newly married urban couple found a sprawling French Country estate on 2.2 acres in Cherry Hills Village and decided to make it their home. The challenge: Turning a formal, 7,500-square-foot castle into a California-esque resort, modeled after the Parker Palm Springs, a Hollywood Regency-style hotel renovated by Jonathan Adler. “Our vision was to create a resort-like home, where all of our friends could come visit us and never want to leave,” says Taylor, a commercial and residential developer, and an avid art collector. Taylor, who was trained as an architect and landscape designer and is self-taught in interior design, wanted to showcase his well-rounded set of skills in the massive, 14-month renovation.

“We intended to update the house, but as the project unfolded, the style took on a character of its own.” — Julie Taylor, homeowner

Built in 1952, the house had eight different owners, each who had chartered some type of renovation or addition, making for a cobbled design with varying ceiling heights, inconsistent trim and different hardware throughout the house. In the entryway flooring alone, there was the original subfloor, a metal mesh with tile, a wood floor on top of that and another tile floor on top of that, resulting in 3 inches of different flooring, all stacked on top of one another. “The house was ready for a complete revision, something that would create a feeling of cohesiveness,” Taylor says.

After taking it down to the studs, Taylor added a cabana wing to “bring the house to the pool,” at the same time building a greenhouse to create a courtyard around the pool and to give the family what felt like an outdoor living space in the winter months. He included a master suite on top of the cabana, vaulted ceilings in the upstairs bedrooms, four more garages and a larger kitchen (800 square feet). Plus, they installed all-new plumbing fixtures, 48 custom-made doors, cabinets, and base and crown molding.

Today, the house measures 10,500 square feet, with a pool, hot tub, pickle-ball court, formal garden, working greenhouse and six outdoor fountains. The interior is whimsical in design, with different personalities and atmospheres in each room: 1960s disco defines the TV room, while the cabana owes much to the iconic Beverly Hills Hotel, and the kitchen is contemporary and sleek. “We didn’t want to be tied down by one style, and I certainly didn’t want to be beholden to any rules,” Taylor says. “It’s compartmentalized into each room versus one expansive space. We broke the rooms into themes, threshold-by-threshold.”

After designing contemporary interiors for 25 years, Taylor says he was ready to try something over the top, so this was his opportunity. “I wanted to go maximalist instead of minimalist,” he says. He used a richer color palette; a lot of brass fixtures and lighting elements; heavy, black doors and windows; bold-striped awnings; gilded tile floors; decadent wallpaper; crown moldings; and detailed trim. “When we first bought the house, we were told it had been built for Esther Williams, but she never lived here,” Taylor says. “After we closed, we found out it had actually been built for Ethel Merman.” His wife, Julie, laughs and adds, “Esther got us on the Hollywood Regency kick, because it was built for this glamorous actress. Even though it was really for Ethel, we were already so committed to the style that we just kept with it.”

Living life at their own private resort has been a dream for the Taylors and their daughters, ages 12 and 2. “Our friends stop at the market, pick up food and just wander in all day long,” Julie says. “We have lockers in our cabana where they leave swimsuits, the pool is regulated at 88 degrees, and adult beverages are flowing.” According to plan, their friends who just “stop by for a drink” never want to leave. And yes, their daughter has become an accomplished bike rider on the quiet side streets of their neighborhood. 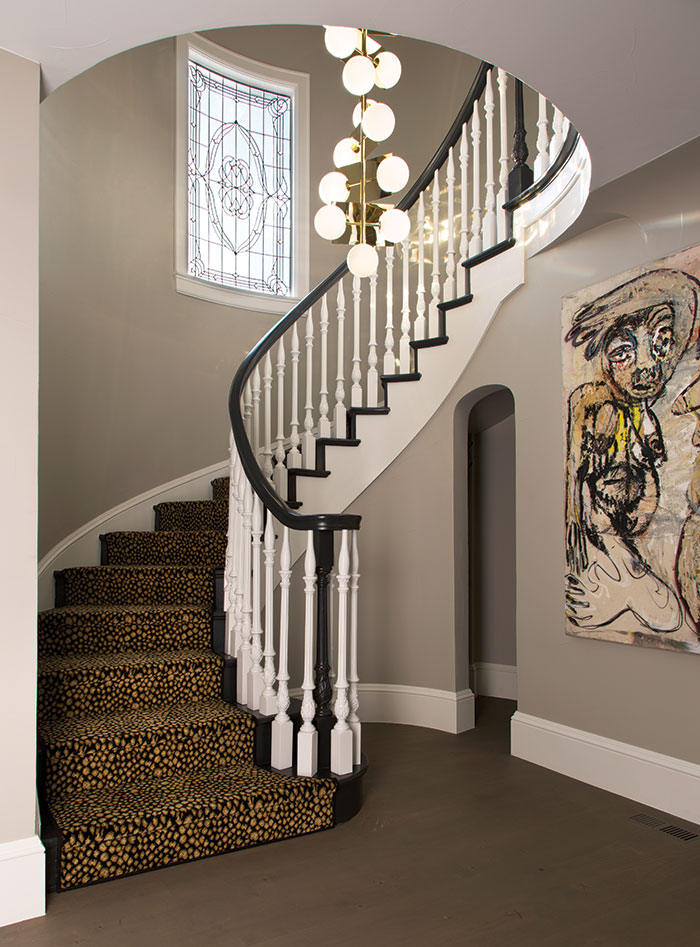 In the formal entryway, an Aztec Carpet & Rugs’ runner lines the treads, with a Tom Dixon chandelier adding extra oomph to the stairwell. The painting to the right is by Daniel Crews-Chubb, purchased at Vigo Gallery in London. 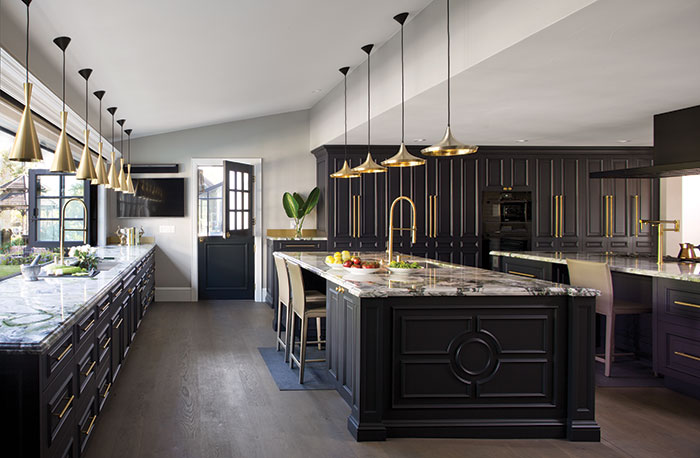 Rows of Beat Tall Pendants and Beat Wide Pendants by Tom Dixon from Studio Como in Denver line the custom islands made by Woden Woods of Denver. The countertop is Icelandic white marble, and the stools are from Crate & Barrel. Hardware is Colonial Brass, and faucets are California Faucets—all from Denver Hardware. Windows are LaCantina, the hood is by Colorado Custom Stainless Inc., and the custom barn door was made by BMC West in Denver. 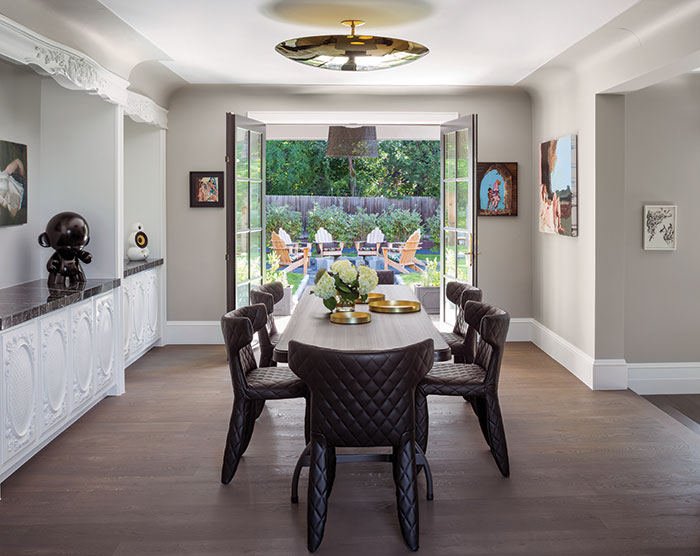 Moooi Monster Chairs by Marcel Wanders from Studio Como in Denver surround the homeowners’ existing table. Artwork is by Genieve Figgis from Half Gallery in New York City. A Dunny by Kidrobot sits atop the buffet. 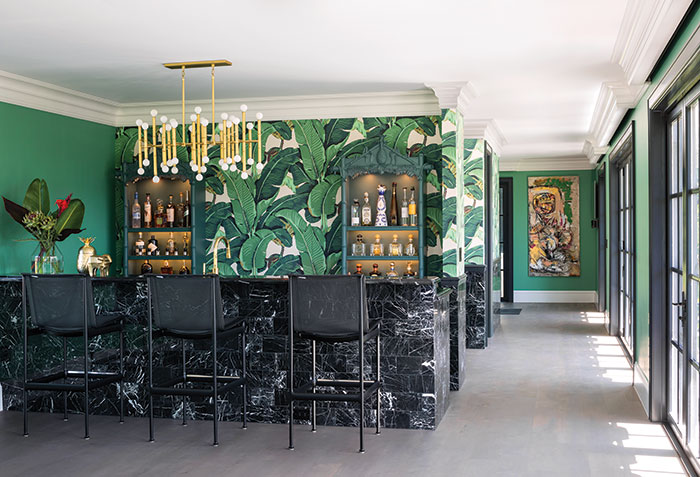 Modeled after the iconic Beverly Hills Hotel, this room employs the original Martinique wallpaper by Designer Wallcoverings used at the hotel. Jonathan Adler’s Meurice Rectangle Chandelier hangs above a Nero Marquina marble bar, with Richard Schultz 1966 Collection Barstools from KnollStudio in Denver. The vintage cabinets are Gampel Stoll, sourced from Circa Who in West Palm Beach, Florida, and refurbished by Woden Woods of Denver. The painting is by Daniel Crews-Chubb, purchased from Vigo Gallery in London. 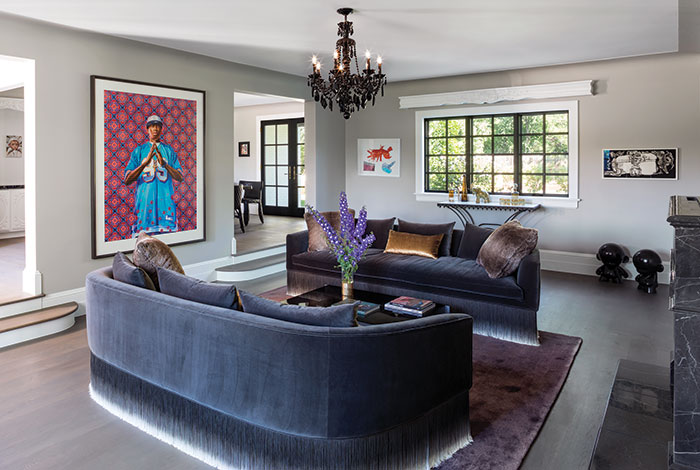 Facing Amami Sofas by Moooi from Studio Como in Denver rest on a rug from Organic Looms, while a Hamilton Black Chandelier by Swarovski Lighting hangs above. The large-format artwork is by Kehinde Wiley, a Torey Thornton piece is to the left of the window, and an Ibrahim El-Salahi piece hangs to the right of window. Two Dunnys by Kidrobot stand on the floor. 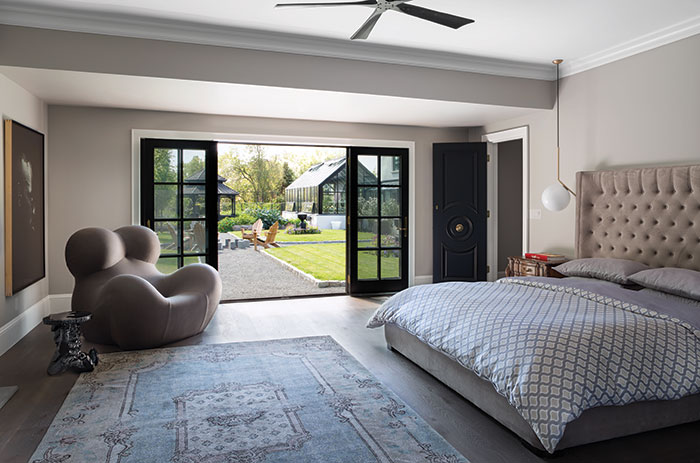 This main-floor room opens to a crushed-granite pathway, leading to a CrossFire Brass Burner fire pit from Warming Trends in Denver. The greenhouse is custom-designed and built by Solar Innovations, and the fountains are Campania from Birdsall & Co. in Denver. In the bedroom, the B&B Italia Up6 Armchair anchors the space, with a rug by Organic Looms and a pendant light by Flos. The photograph is by Nick Havholm. 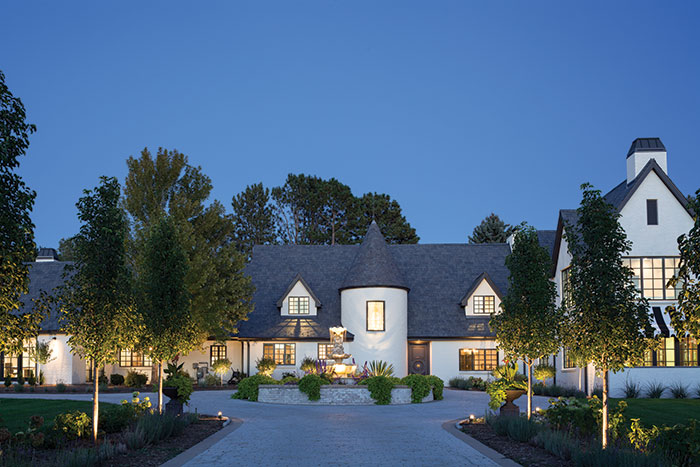 “Our vision for the landscape design was to create formal gardens that match the character of house,” says homeowner Jim Taylor. The castle-like estate, built in 1952, was originally designed for Ethel Merman, but she never lived in the home. 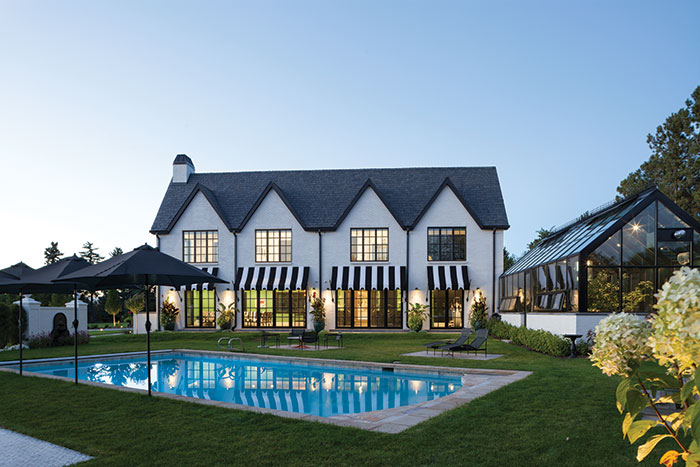 Furniture is circa-1960s Richard Schultz, all from KnollStudio in Denver. The black-and-white striped awnings are from Awning Company of America in Englewood, and the tile under the patio furniture is from Porcelanosa in the Denver Design District. The slate roof is from Wilson Brothers Roofing in Denver.