A Bright and Modern Loft in Capitol Hill 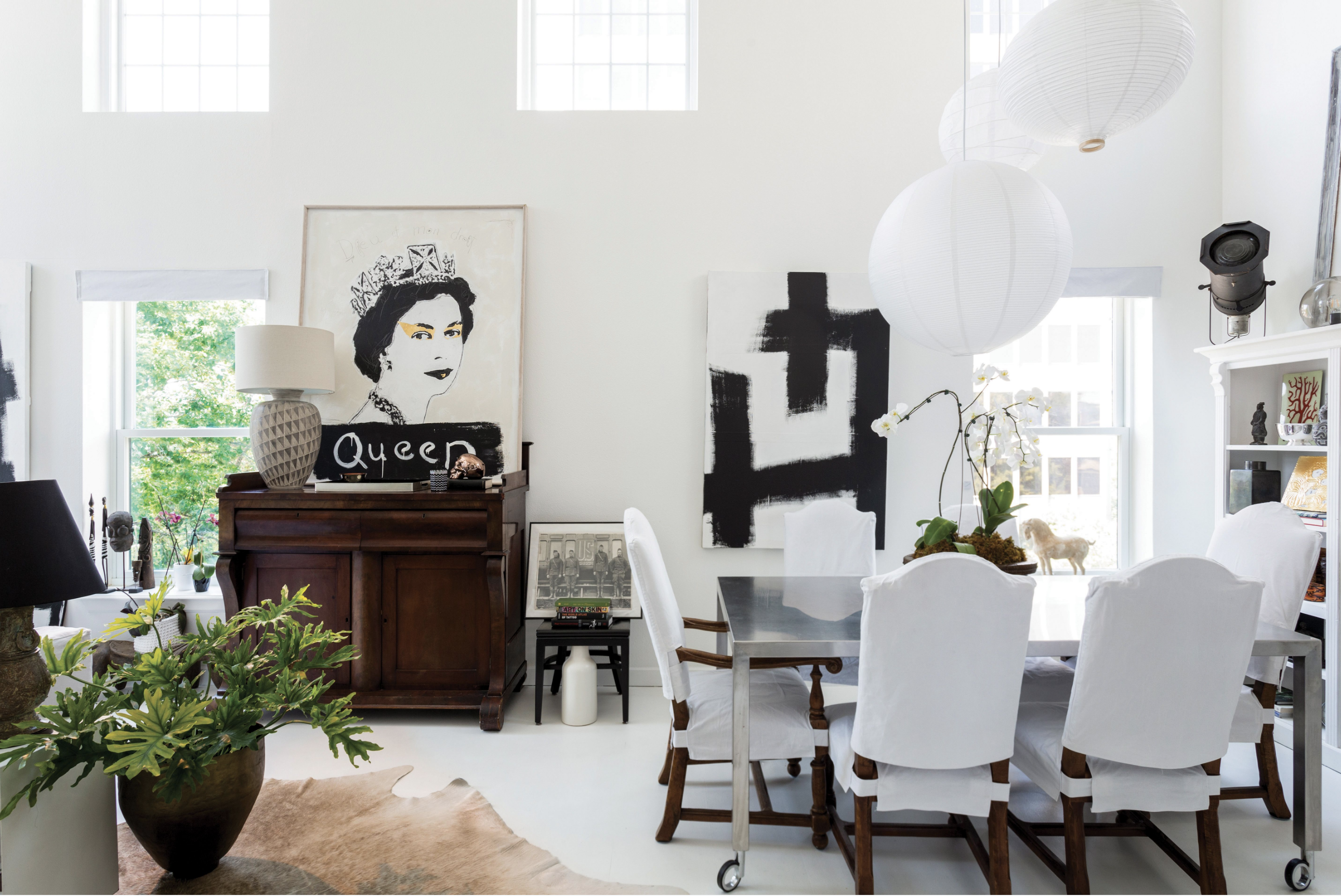 “I’ve always wanted to live in a white box with art,” says Marc Durivage, an interior designer who moved to Denver a year ago, when his husband’s job relocated to the Union Station neighborhood. Although leaving the Bay Area wasn’t easy, renovating a 1,500-square-foot loft in Capitol Hill made the process more appealing. To achieve his vision, Durivage spent the first 10 days of his time in Denver painting their condo pure white from walls to floors—ensuring that he would have a pristine backdrop for his multitude of paintings and sculptures.

“In our community, we’re referred to as Gay Bears,” Durivage says, referring to a Target polar bear he painted white and put on the wall—a kind of coat of arms for this postmodern loft. The visual mix is California cool meets European elegance, adorned with relaxed, white slipcovered sofas; an abundance of natural light; high ceilings; and a stark palette that is decidedly black and white. Durivage’s husband of two-and-a-half years, Robb Stilson, is a digital art director for The North Face, where he constantly works with color, pattern and texture. “It’s very relaxing to get home to our calm and soothing space. I don’t want color coming at me,” Stilson says.

Eclectic artwork lines the walls of the 1996 loft, almost all created by Durivage, who painted new pieces nonstop in preparation for the move. Massive works include a Princess Leia silhouette and portraits of Queen Elizabeth and Yves Saint Laurent. The renovation also included an office that converts to a bedroom for Durivage’s daughters (ages 15 and 11) when they visit, two or three times a year.

It was also important for Durivage and Stilson that their space involve little upkeep, because they often travel to Montreal, San Francisco, Palm Springs and L.A. “We wanted a small place where we could turn the key and come in and out as we wanted. Although I’d love more closet space, I definitely didn’t want a yard,” says Durivage, who has an overabundance of vintage bags and jackets, his favorite right now being an American Army field coat with psychedelic patches, pins and a Japanese tiger on the back.

“When you’re truly passionate about clothes and fashion, you never really have enough storage space,” he says. “The trick is grouping items together and repurposing certain elements for storage. My regular hanging closet holds jackets and shirts; an antique Hepplewhite chest holds jeans, hats and scarves. I love the juxtaposition of old and new.”

His bags are stored on upper shelving or even displayed on pieces of furniture. “I am a complete bag junkie, and most pieces are custom. I have a few Parisian graffiti Louis Vuitton, a beloved vandalized Dior with pins and buttons, a studded Longchamp, and an Ed Hardy with Japanese cranes,” he continues. “Being gay and queer, I’m always interested in blurring the lines of fashion. I grew up fascinated by my grandmother’s clothes and bags and jewelry. I guess it rubbed off on me. I often get compared to an aristocrat punk— and I kind of like that.”

Currently, Durivage is designing projects in his native city of Montreal, as well as a few homes and condos in Denver. His work is highly personalized, each space completely individualized in style and personality. “As a designer I use my skill to ‘paint’ someone’s portrait. An interior really has to reflect the person inhabiting it. It might be Midcentury modern and pared down, or it can be grandiose and extravagant. Sometimes I create someone’s interiors and end up styling their wardrobe as well.”

And while Durivage is covered in tattoos (and even owns a tattoo machine to further his own body art), Stilson doesn’t have any. The couple is very much on the same page, however, in terms of design and use of their loft. Durivage’s vision involved playing with perspectives and a varied use of space. “I sanded and painted the entire floor. But the great thing about white floors is that it’s an inexpensive way to upgrade—and everything looks great on it,” he says. “By the time I was done, it was a gleaming white box for art and my collections. And I love the west-facing light. Even on a gray day, it bathes the inside.” 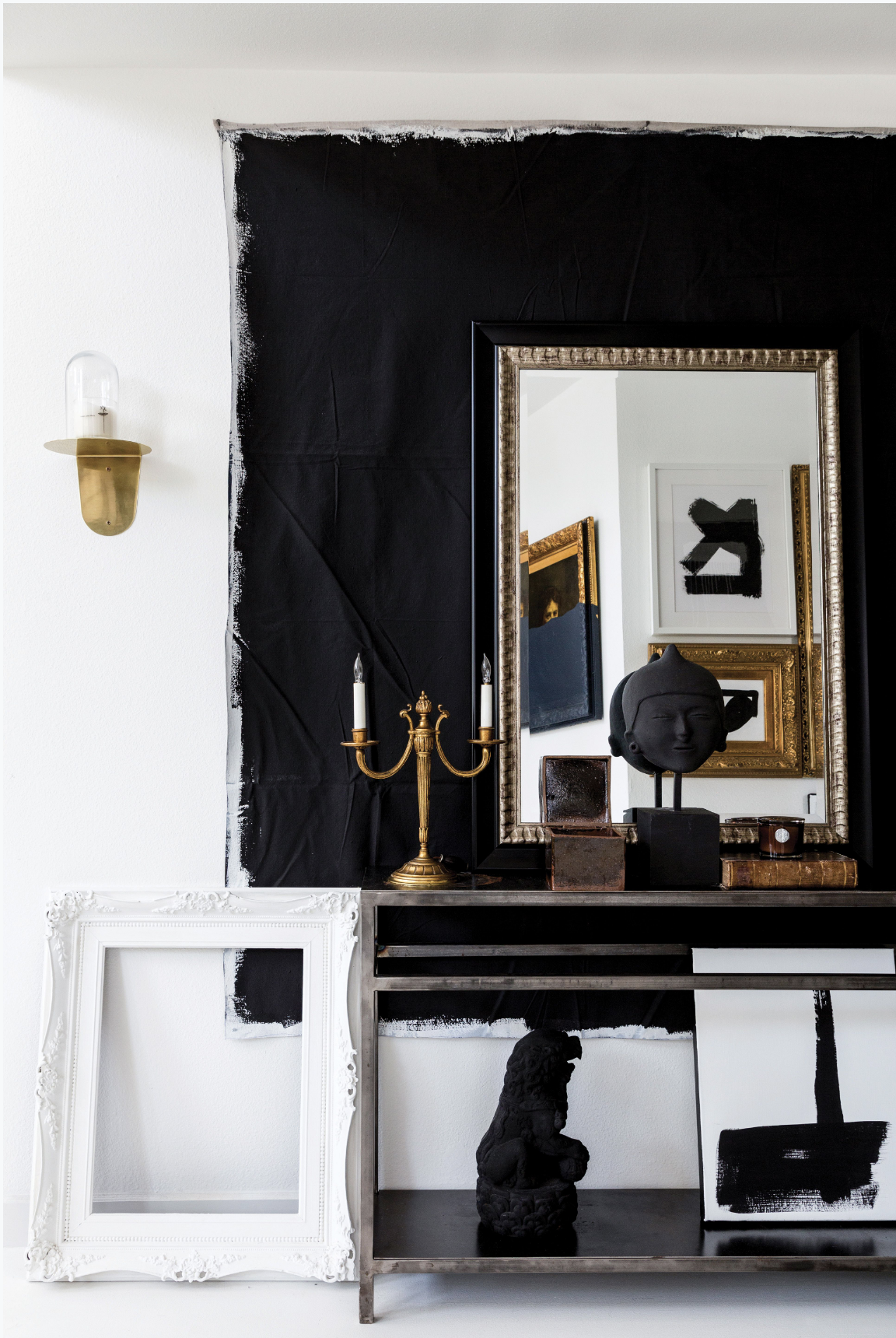 A brass wall shelf from CB2 is placed next to a painting titled Effusion Noire II by Marc Durivage. The candle is from Maison Louis Marie, and the gilt-bronze candelabra is from Herzog. The custom iron console is by Marc Durivage Design, and the small white painting underneath is Blanc Abstrait IV by Marc Durivage. 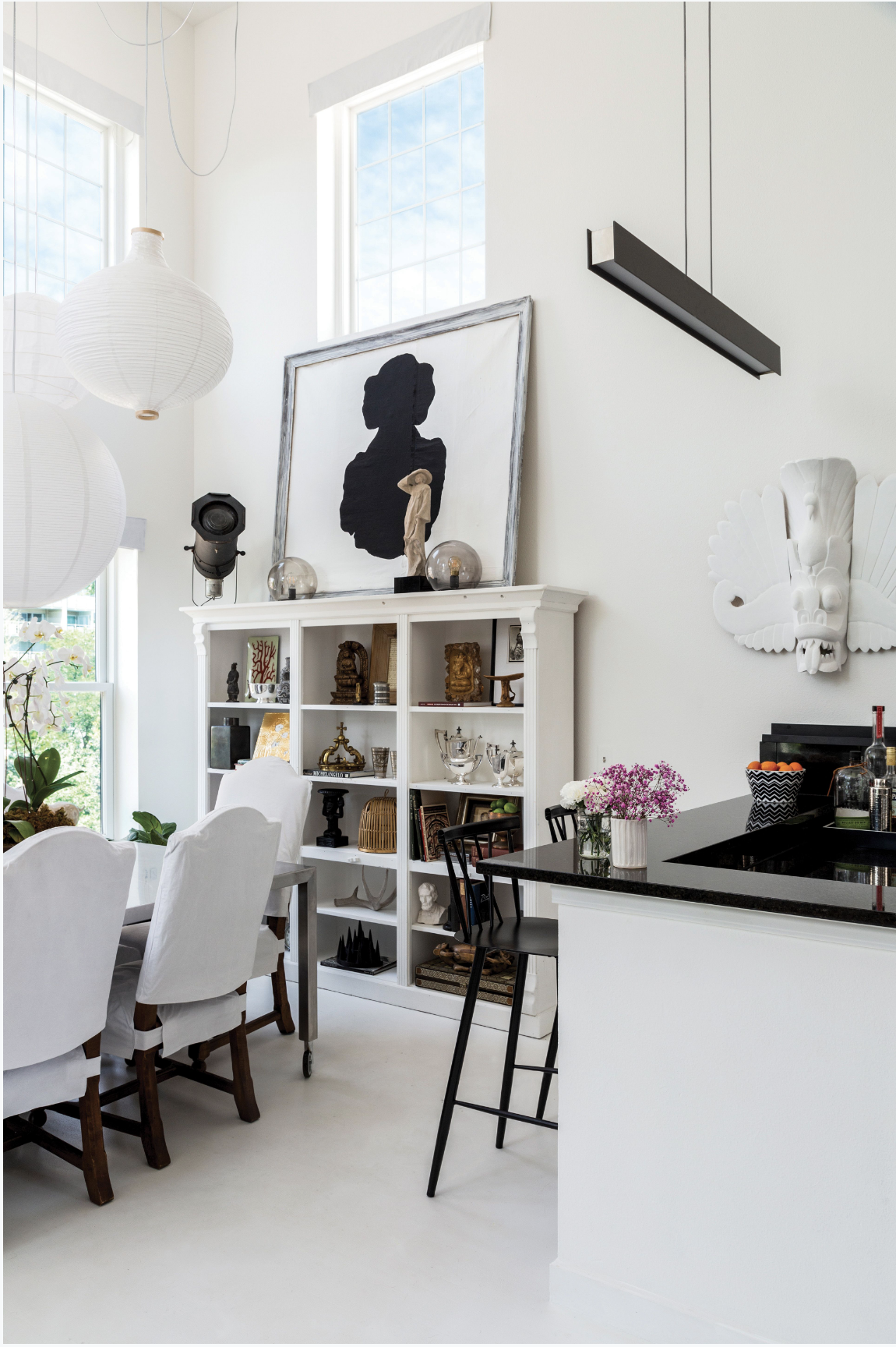 “Robb is a huge fan of Carrie Fisher, so I’ve made a lot of paintings with her,” homeowner Marc Durivage says, referring to his Princess Leia silhouette painting above the bookshelf. “He’s a nerd, so he also loves Wonder Woman and comic books.” The paper light fixtures are from Ikea, and the stainless-steel table was bought at a flea market. 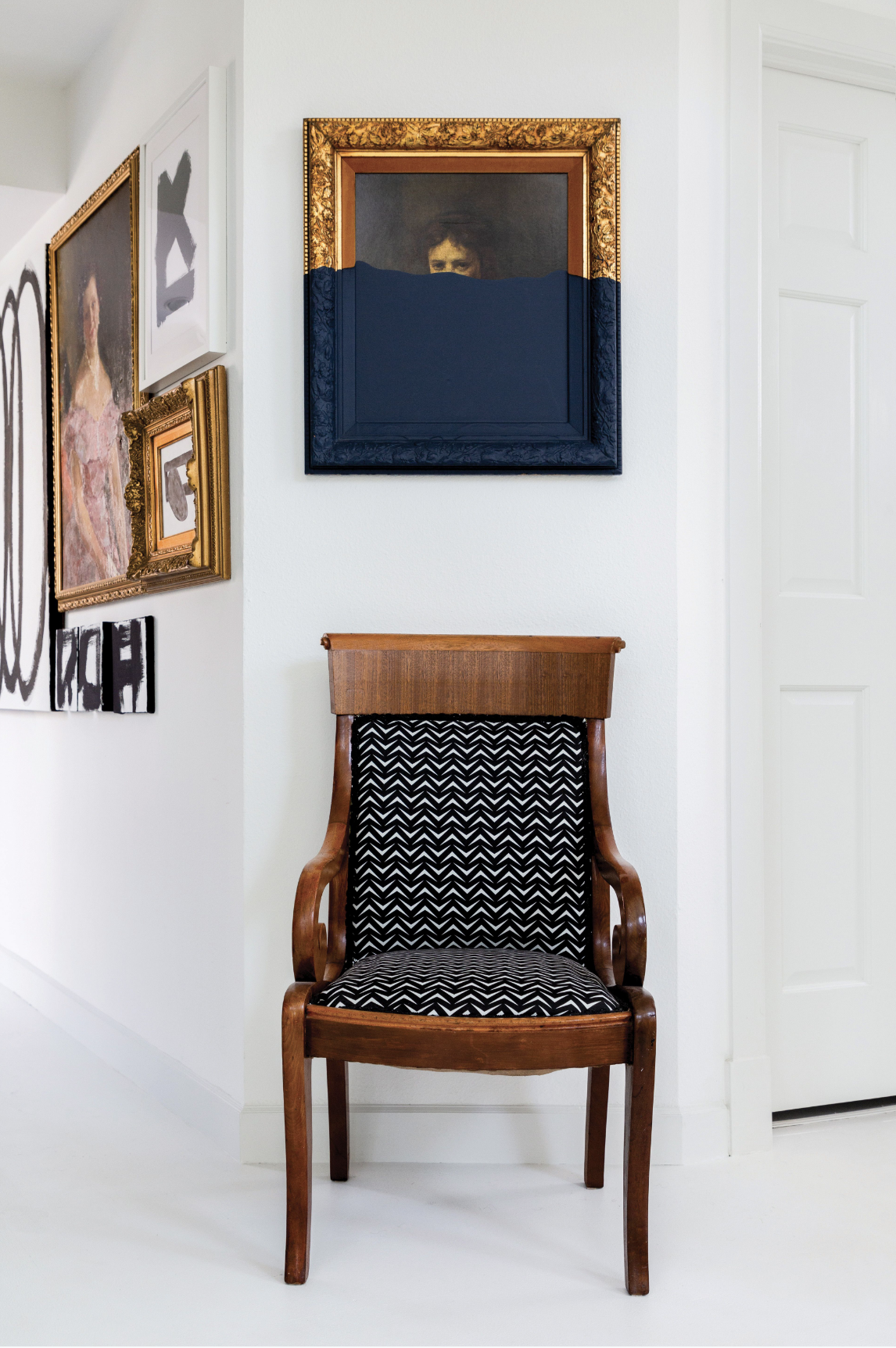 A French Restoration chair bought at a Paris flea market is upholstered in a shower curtain from Target. The Dipped Old Master painting is by Marc Durivage.

“What people don’t realize about modern and contemporary is not just the feeling but the tension you create between pieces. That’s what creates the modern aspect of it.” — Marc Durivage, Homeowner and Interior Designer 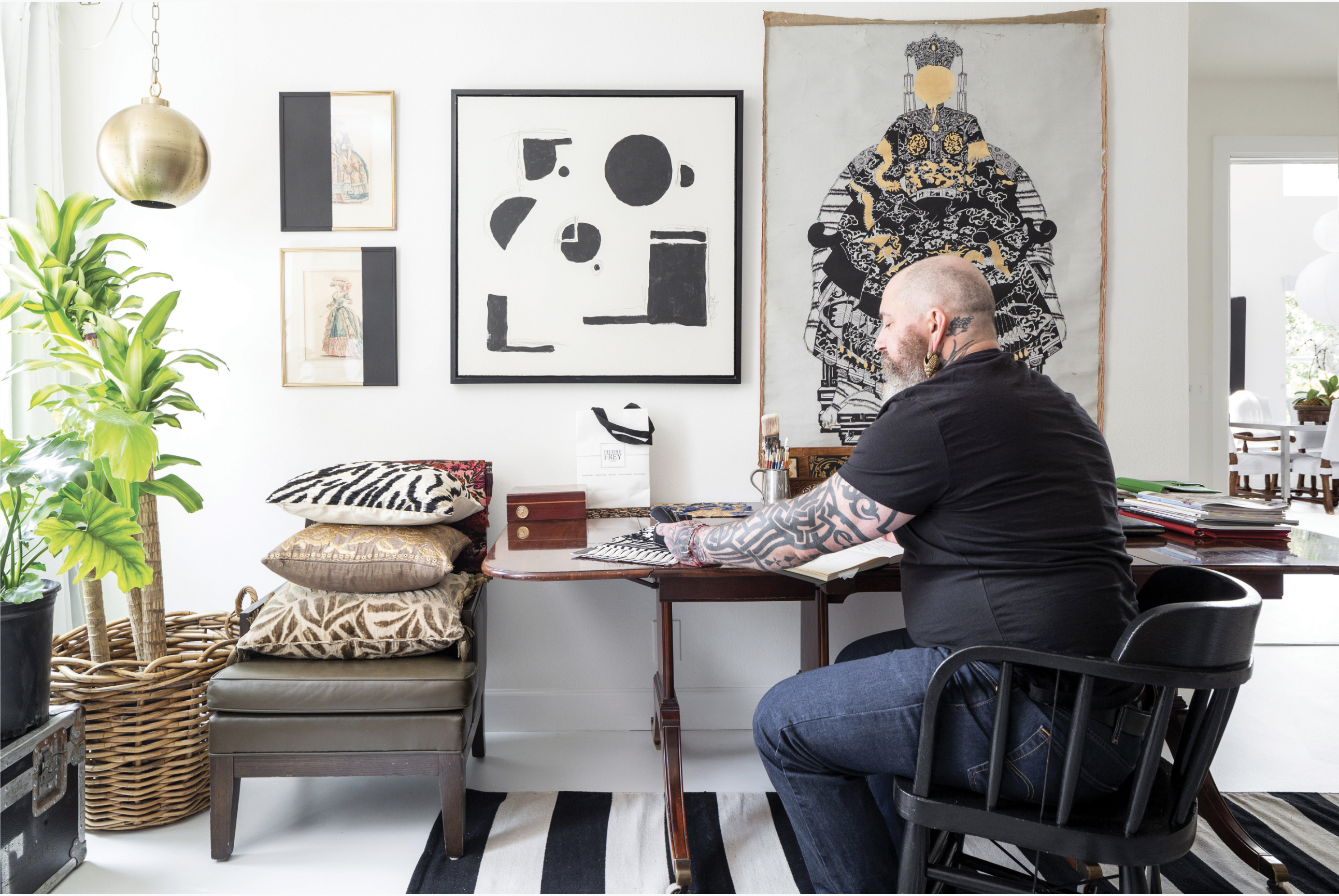 A Chinese empress painting with gold-leaf accent by Marc Durivage hangs above a Georgian-style table from Herzog. A French 1940s leather chair bought at a Paris flea market holds a stack of pillows from Clarence House. The rug is from Target, and the Geometric Carree painting is by Marc Durivage.

“I often get compared to an aristocrat punk— and I kind of like that.” — Marc Durivage, Homeowner and Interior Designer 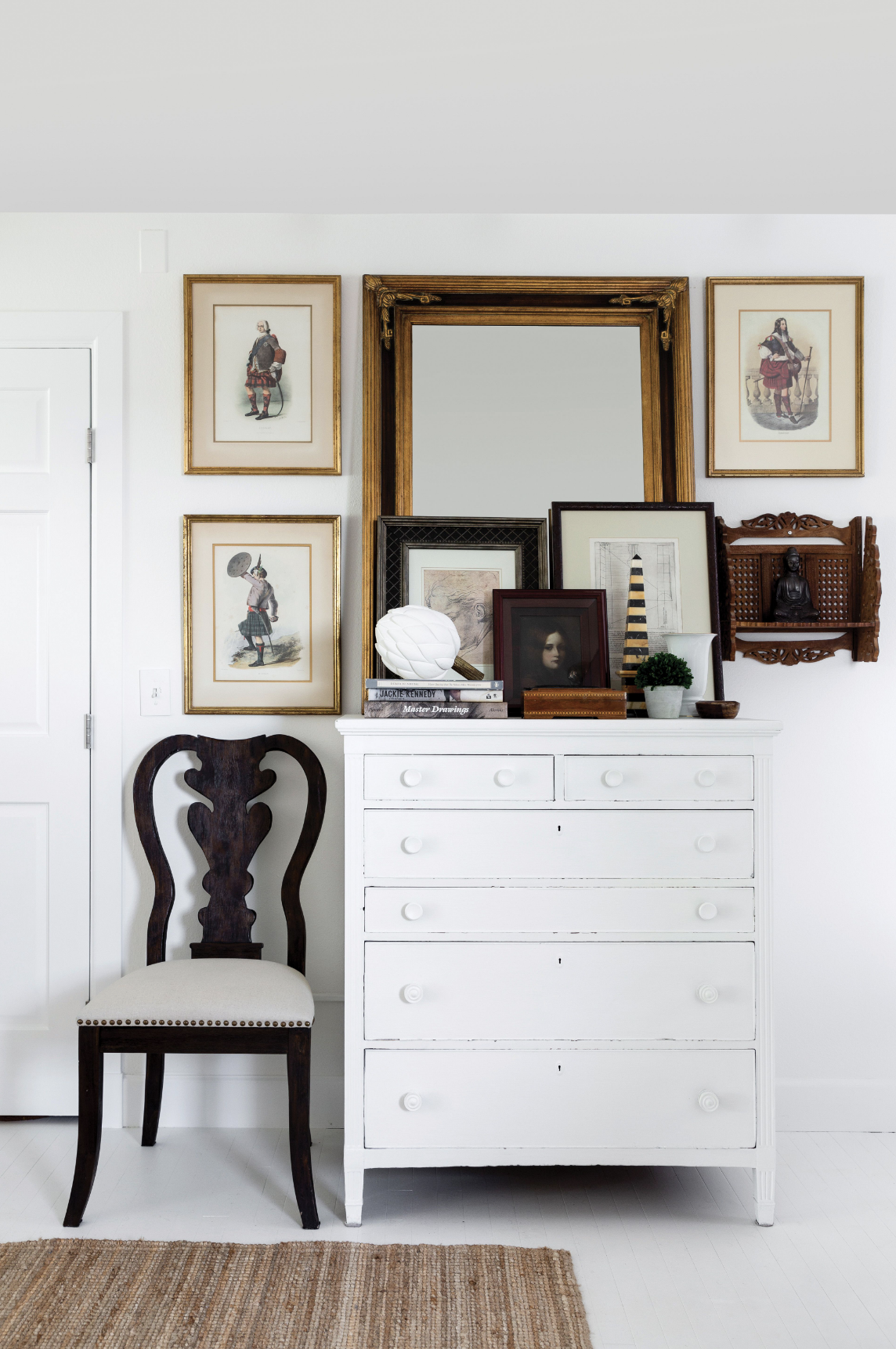 A white dresser from Urban Ore sits next to a chair purchased at Goodwill Thrift Store, and a mirror sourced by Marc Durivage hangs above. The sisal rug is from Ikea, and the antique Scottish prints are from local antique dealers. 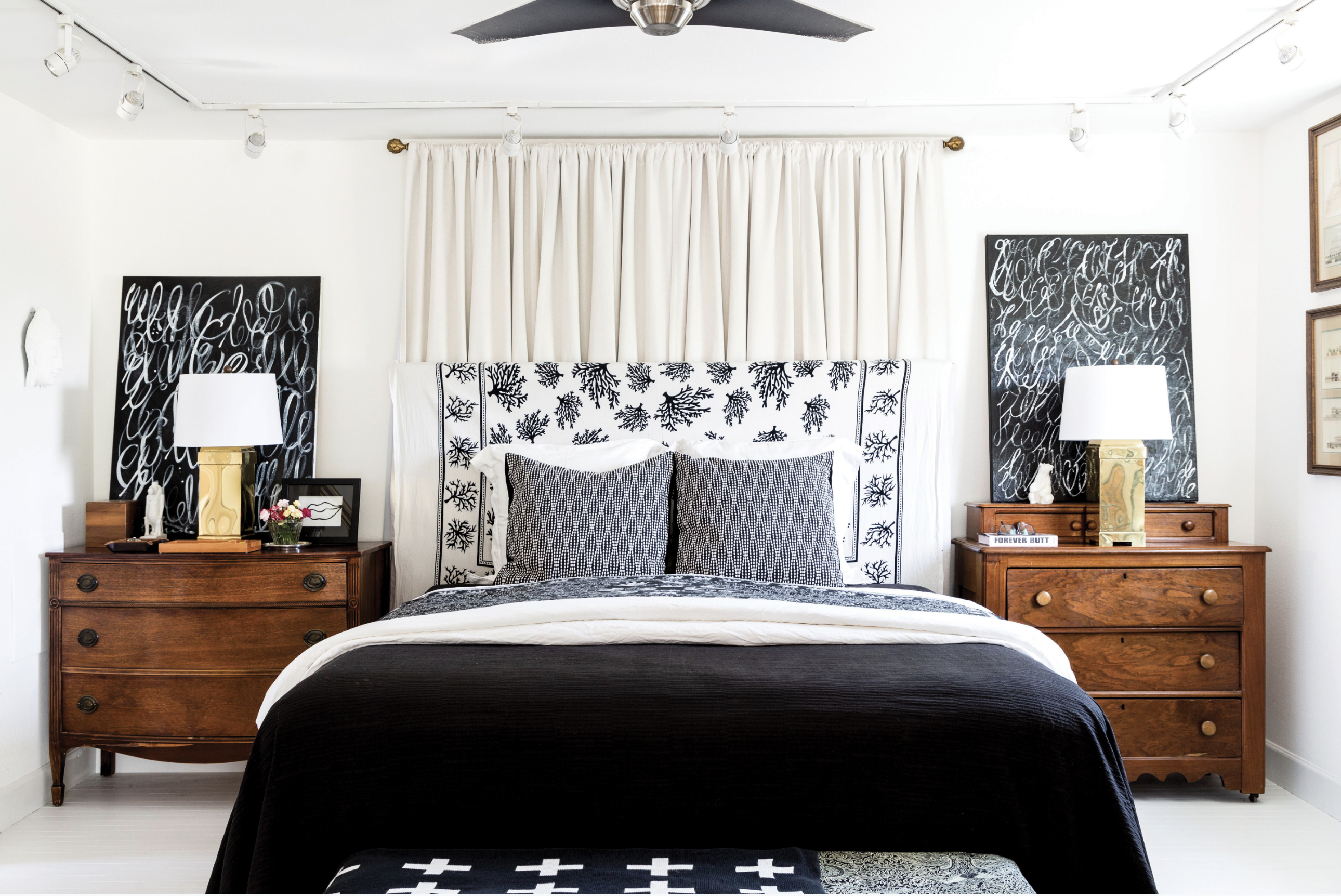