A Basalt Home Rooted in Sisterhood

When a Basalt-based educator hired her sister to design her new home, lots of wonderful things happened. Namely, trust, love, and new beginnings 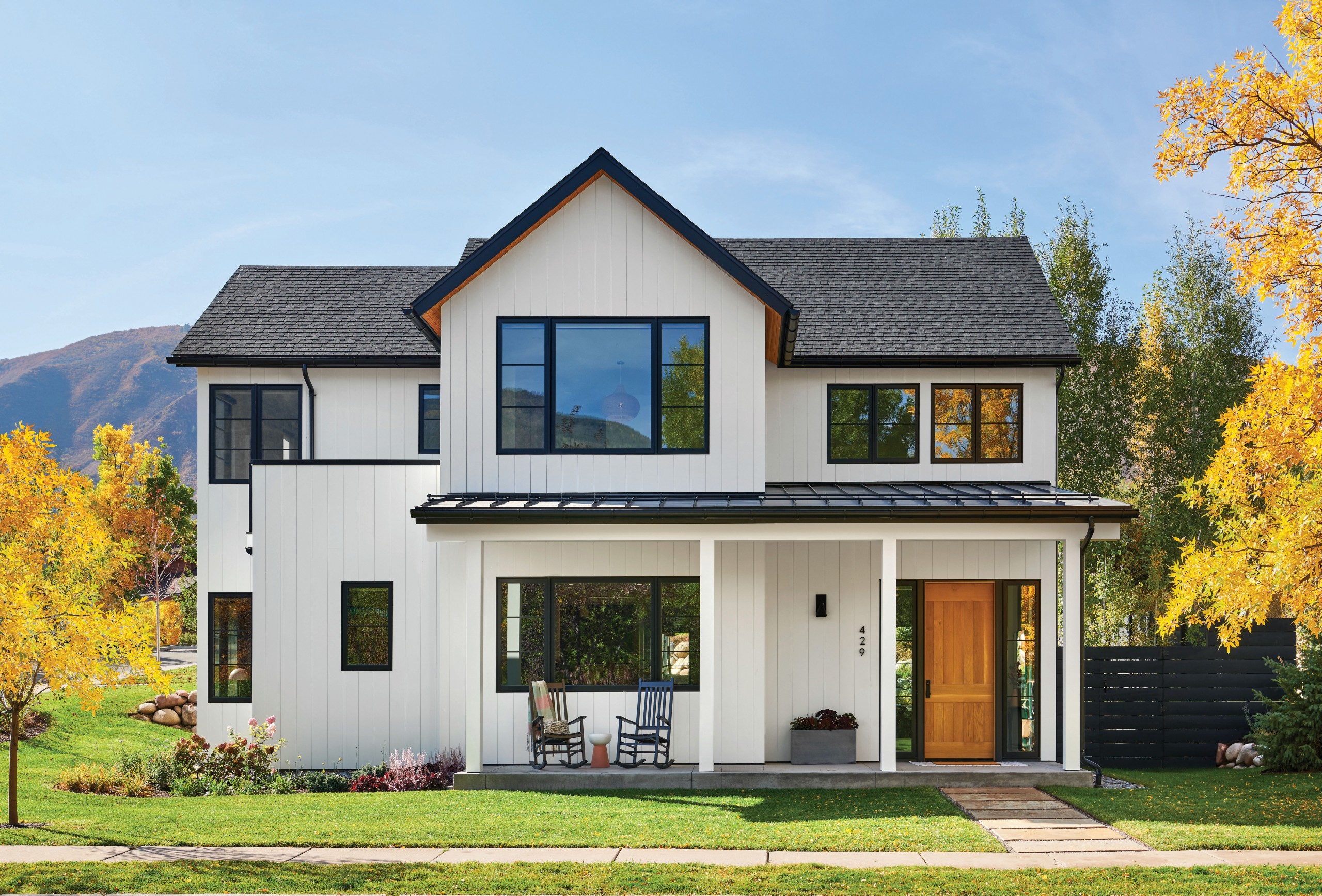 Sense of Place Due to the grading of the site, the architect settled on a split-level design for the home. “It was a bit of a challenge,” Adler says, “because in the ’70s and ’80s, split-levels were all the rage, but nowadays it’s not what people want. Here, however, it took advantage of the topography and created a nice sunken backyard. It ended up being great for their family.” And, he adds, “We do a lot of vacation homes, so it was really nice to design one for a full-time resident and, in particular, a young, growing family.” | Photos by Dallas & Harris Photography

Sometimes the most stunning outfit is the simplest: a perfect pair of jeans, a bright white T-shirt, and hip sneakers.

This is precisely the aesthetic Morgan Carper, a former New York City fashion designer turned interior designer, created in a new modern farmhouse in Basalt—comfortable, down-to-earth, and stylish, with a subtle edginess that exudes confidence. 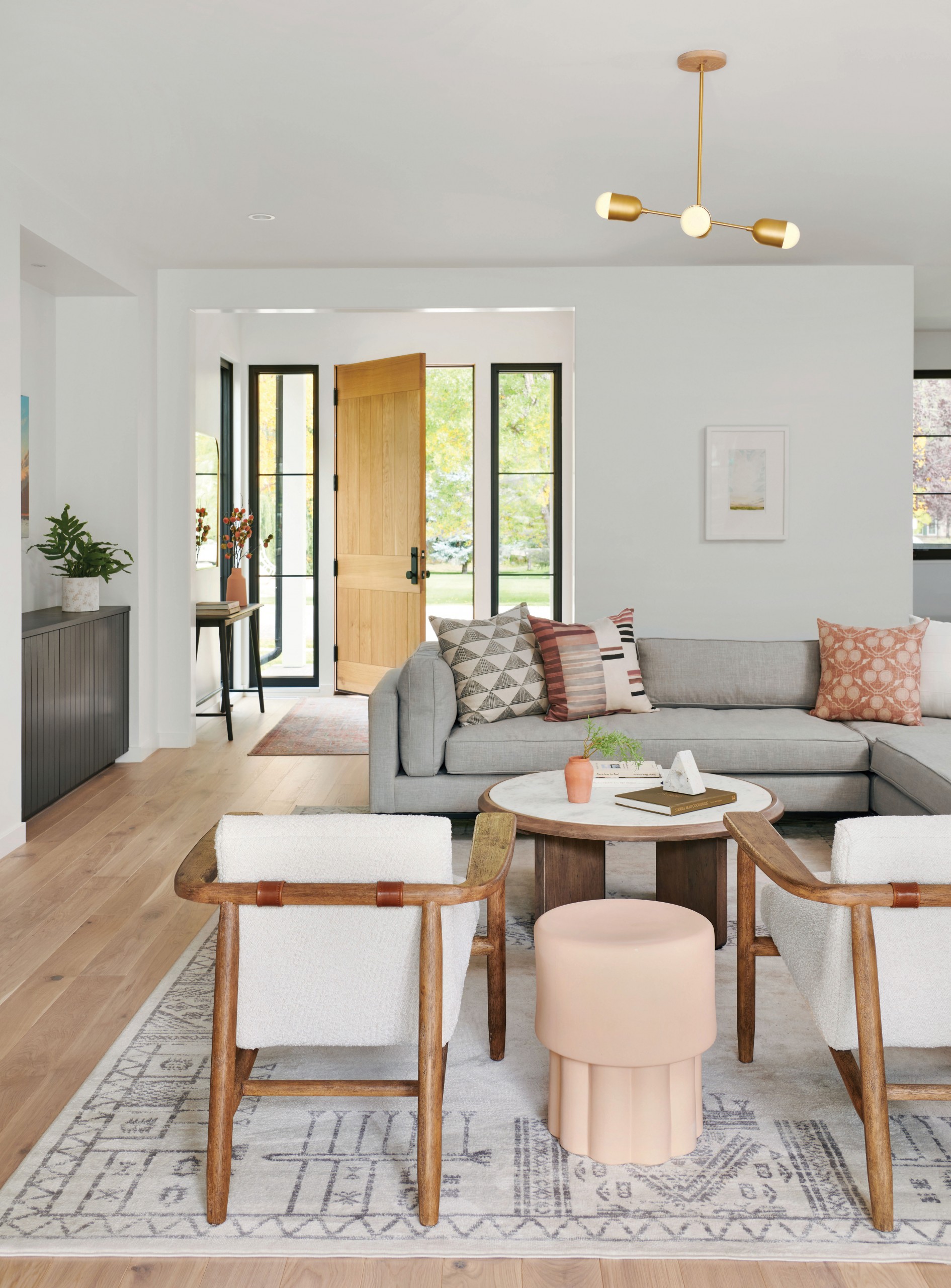 Modern but Earthy The inviting living room weaves a neutral color palette with textured elements and pops of color. “The furniture is pretty modern, but the fabrics are textured,” Carper says. “We used a lot of those earthy terra-cotta tones throughout the house, anchored by neutrals.” The modern brass chandelier is from Worley’s Lighting, the pillows are from Susan Conner Pillows, and the ivory boucle chairs are from Lulu and Georgia.

Unlike most projects, in which homeowners may have wildly different taste than the designers they hire, Carper had full reign of the design because the client was her little sister—and she trusted Carper implicitly.

“We wear the same clothes and have very similar tastes,” she says. Because the two are so close, her sister felt comfortable standing back and letting Carper do her thing. “It was so fun to be able to just run with my vision, knowing it would be her vision, too,” Carper says. 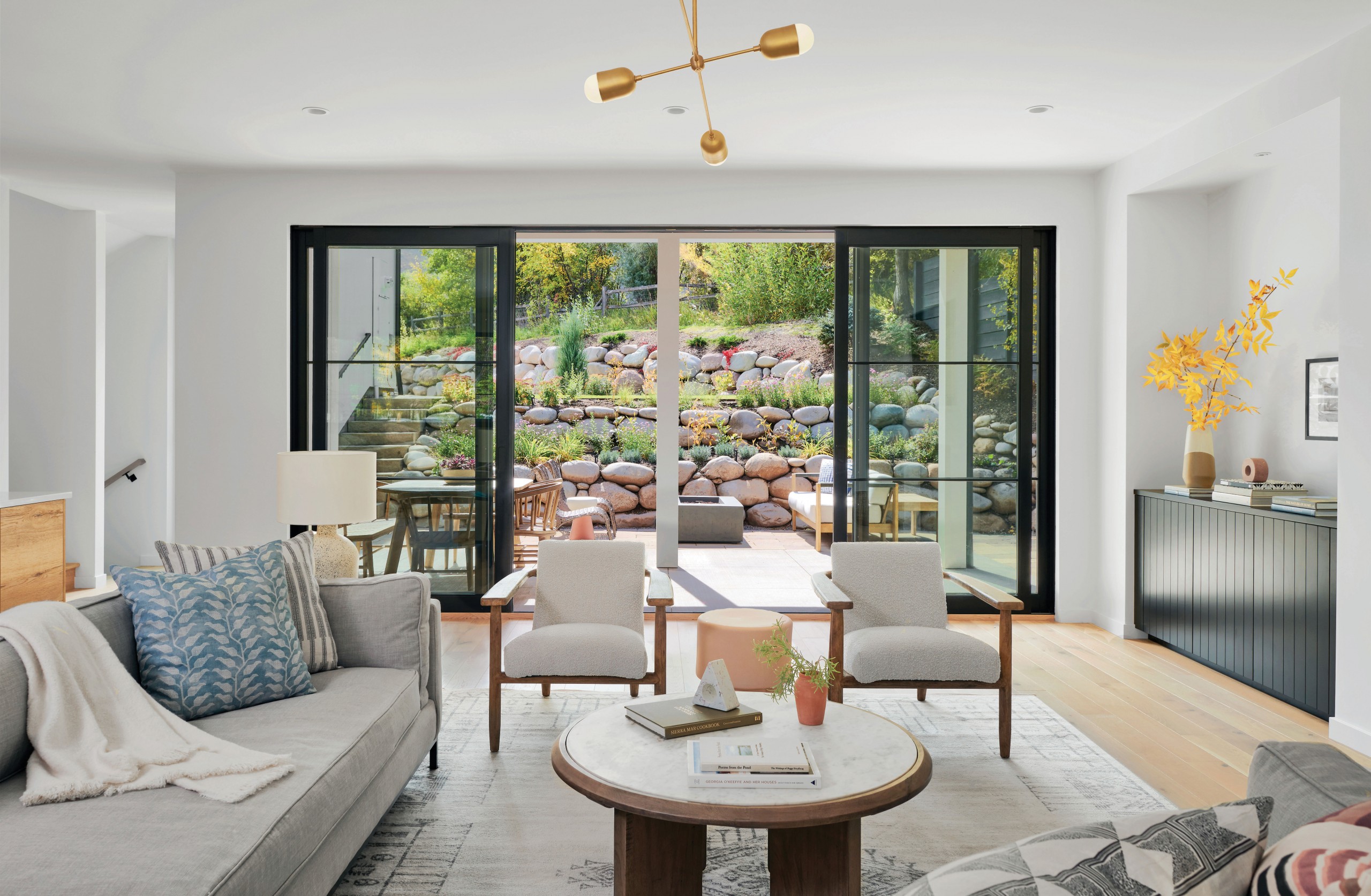 Inside and Out The living room opens onto a sunken backyard patio, with a natural rock and local flora landscape designed by Mt. Daly Enterprises Landscape Architecture. The sliding doors open all the way to seamlessly extend the interior space outdoors.

The sisters’ relationship with each other also took a lot of the guesswork out of the situation. “We were totally real with each other,” Carper says. The homeowner adds, “Working with my sister was a joy. It made decision-making quick and easy.”

The project was Carper’s first-ever from scratch, an important marker in her new career as an interior designer. “I thought I’d be a fashion designer forever,” says Carper, who was a longtime private-label designer for Anthropologie. Then, like everything in life, things changed.

Secret Stash Semi-handmade custom cabinet fronts stow away everything from Legos to throw blankets, while the black color adds contrast and mirrors the door and window trim.

“I’ve always loved interiors, and I knew interior design would be less stressful and more in line with having a family. It was a tough transition emotionally, but it was seamless as far as the knowledge goes,” she says.

Now, three years into her new career, Carper has a dozen projects under her belt from all over the country, and she’s pregnant with her second child. “I’m not looking back,” smiles Carper. 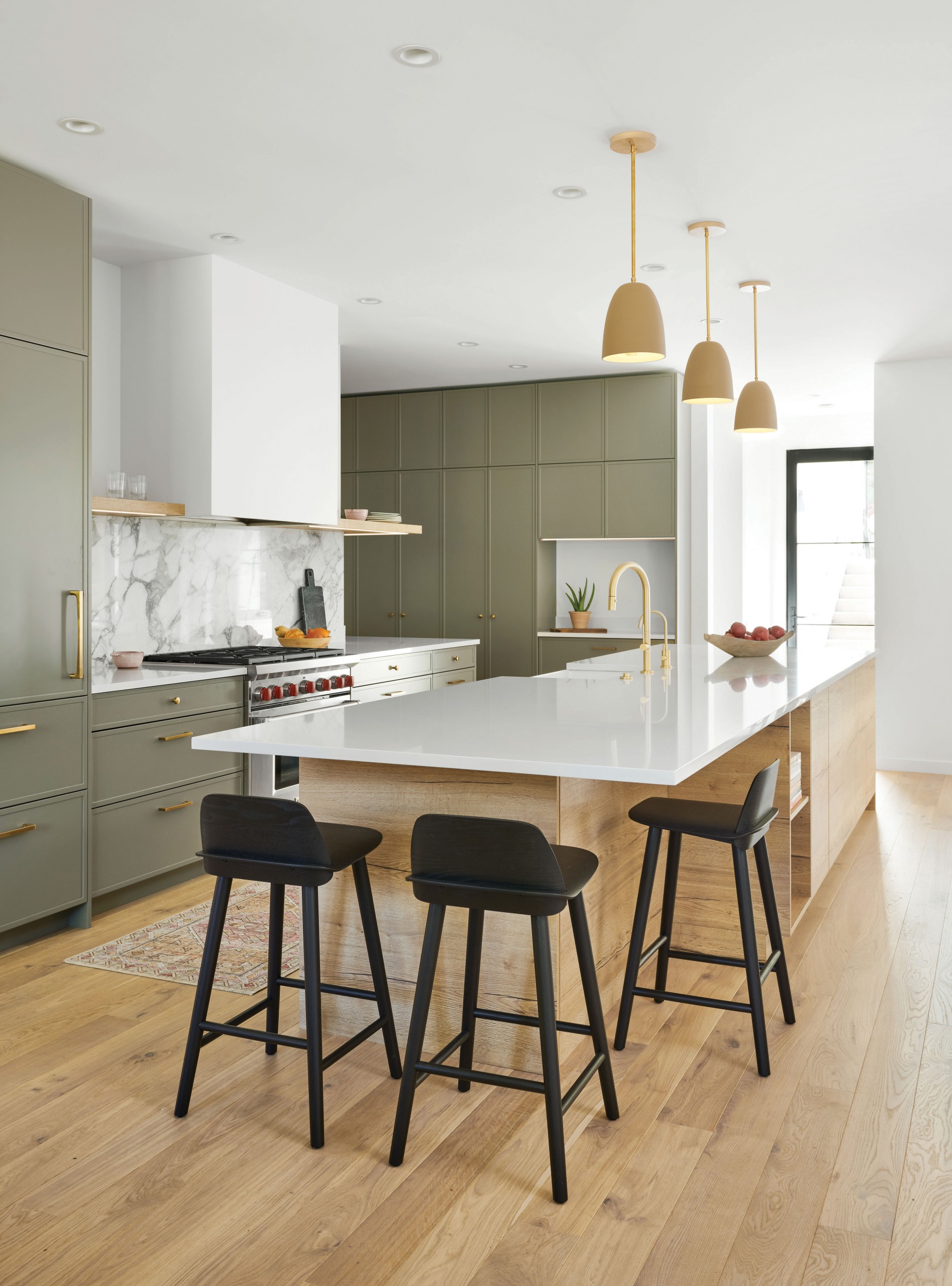 Culinary Retreat The kitchen is clean, spare, and inviting, with tons of floor-to-ceiling cabinet storage. “We wanted it to feel earthy and organic but refined,” Carper says. The white oak cabinets by Basalt Kitchen and Bath are painted a custom sage green/gray, and the Design Within Reach Nerd stools add personality. The Redbud Island Pendants are from Worley’s Lighting, and the satin brass fixtures are from California Faucets. “The contractor,” Patrick Maley at Maley Custom Home, “was so great that we didn’t have a lot of challenges, which was really helpful

The homeowners hired Architect Ken Adler from KA Designworks in Basalt to design a modern farmhouse in a new development in the Southside neighborhood.

“The clients knew exactly what they wanted,” Adler says. “They definitely drove the boat for us.” The Southside neighborhood is very much a front-porch community, where families teach their kids to ride bikes on the streets where they live and neighbors gather for impromptu happy hour at the end of the day. 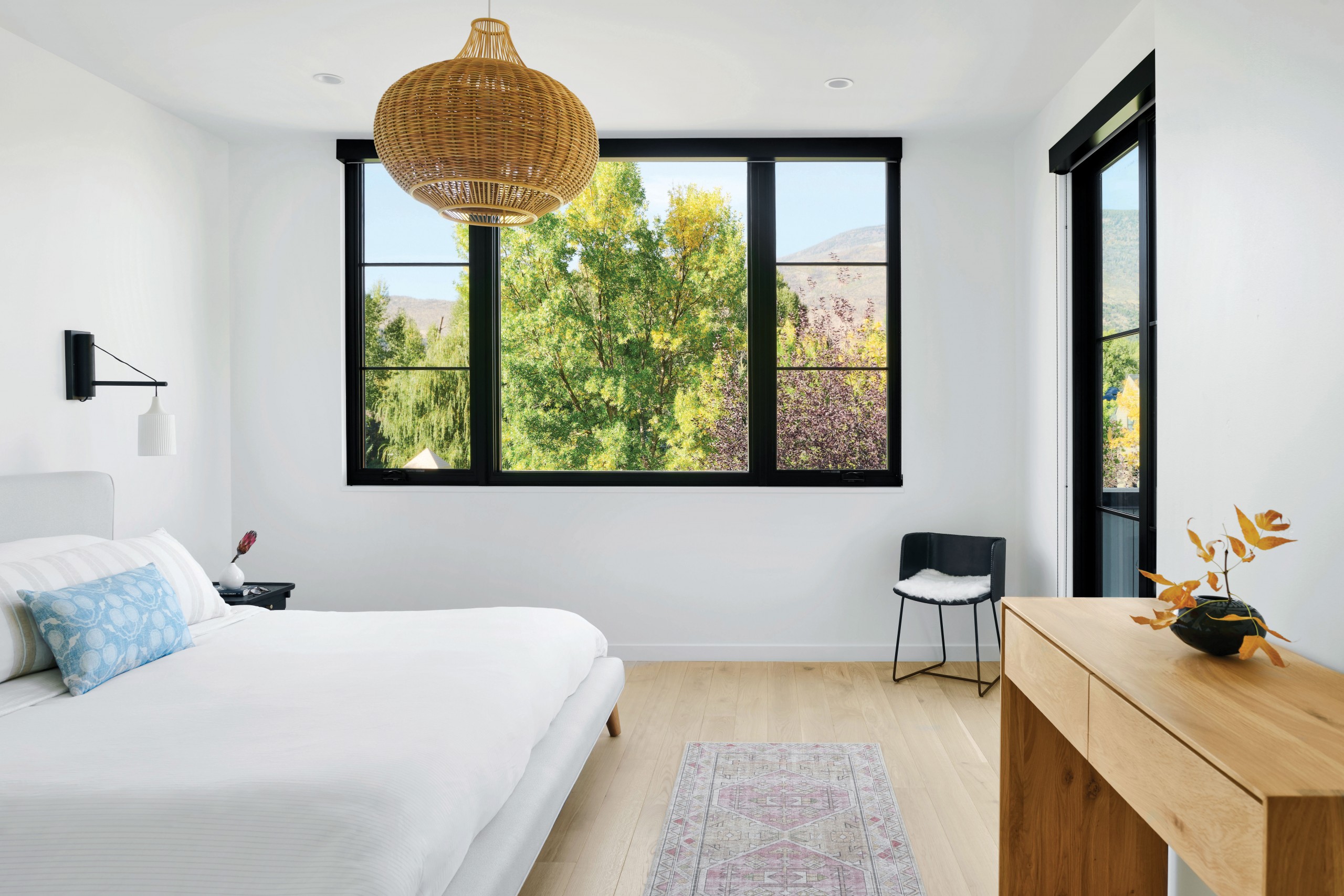 Room with a View The focal point in this light-filled bedroom is the views out the windows, and the décor inside sets the stage. Two sconces from Cedar and Moss bookend the simple platform bed, and a textured rattan pendant above grounds the airy space.

In keeping with that feeling, Adler designed the home to take advantage of its positioning at the end of the street, placing the driveway and garage around the back of the house and making the inviting front porch the focal point.

The layout created a sunken backyard that’s protected from the elements—the perfect spot for the couple’s two young daughters to play year-round. 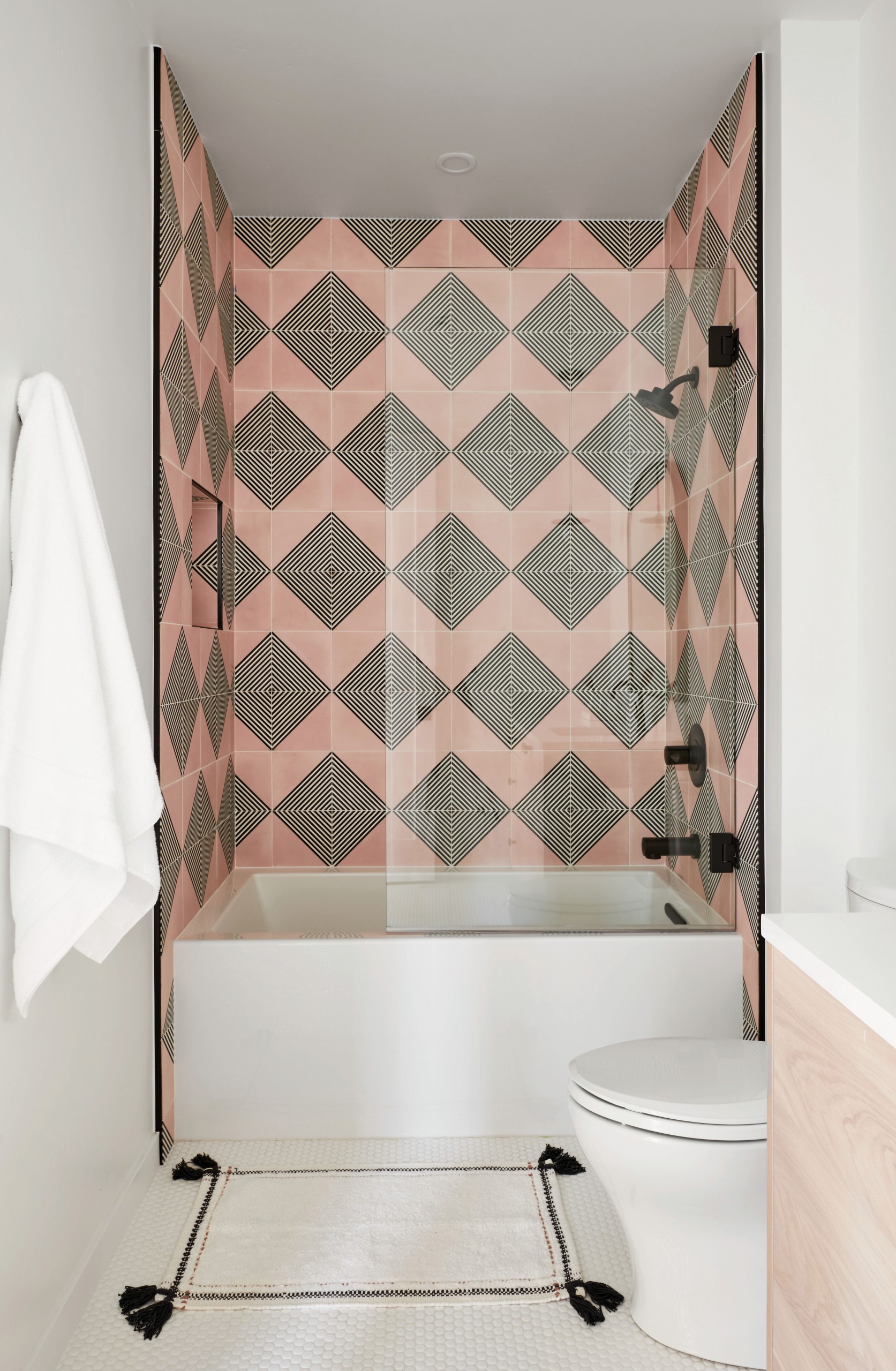 Outside the Box Bold pink and black tile from Clé Tile adds drama to the daughters’ bathroom. “My sister loved it but worried it might be too much. Because we paired it with natural, earthy light wood, it feels toned down, but still fresh,” Carper says. This was a risk her sister might not have otherwise taken, Carper says, “but because she trusts me, it was easy for her to believe it could be pulled off elegantly. And now she loves it,” she says.

Overall, the light-filled home strikes a hard-to-achieve balance between clean-lined modern and comfortably cozy. “Whenever we get compliments, which is often, I love telling people it’s my amazing sister who helped bring it all together,” says the homeowner.