2016 Home of the Year: A Multi-Level Modern Masterpiece 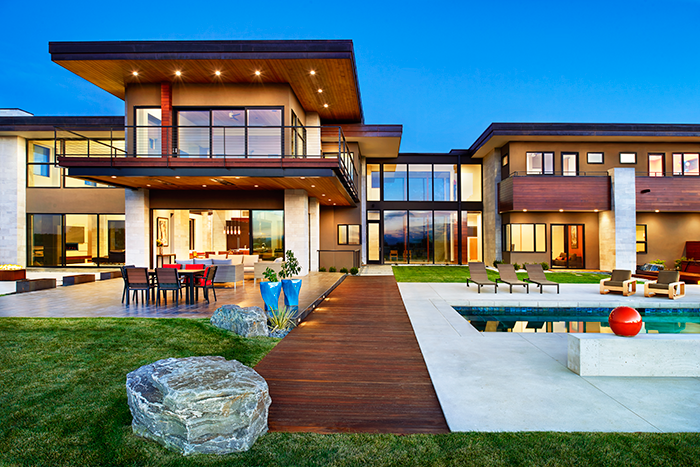 This 6,700-square-foot home sits on a gentle rise on a secluded 2.5-acre lot in Cherry Hills Village. It’s our Home of the Year for a multitude of reasons: its remarkable architecture, its strong lines and calming spaces, the fact that it generates more energy than it uses and finally, the way it frames and celebrates classic Colorado mountain views. It also wins for best building backstory we’ve heard in quite awhile. It seems impossible, but this house is the owners’ starter home, the first house these two busy, successful professionals have ever owned.

The couple met in 1990, got married and had four kids, yet somehow remained lifelong renters. “We looked around sometimes, but never found the place,” says the homeowner.  “We raised our family [twins, now 17, and two daughters, 15 and 10] in tiny quarters.”

And the houses they rented were the antithesis of their new home. “All of our rental houses were traditional homes, bungalows—even one historic home,” says the homeowner. “And the last place we lived in was nice but had that classic basement paneling everywhere. So this is a major change.”

When they started the search for the first home of their own, the couple went all in, looking at hundreds of houses. A few years back, they came across one they liked. It wasn’t quite right, but they were impressed by the builder, Bob Brown. “So we started with a builder, which is a little unusual,” says the homeowner. Then the couple spotted a picture of a house designed by architect Brian Ojala on the Internet. But the partners were divided. “I had always been interested in modern architecture, but my wife’s tastes were more traditional,” says the husband. At least that was the dichotomoy until they drove out to Evergreen to look at Ojala’s work. “My wife saw the house and said, ‘That’s our architect.’ She became a convert. She’s definitely a modernist now.”

Ojala describes their design process as an organic collaboration. “I helped the owners choose the site because they wanted me to have a real feel for it. We went out to all kinds of different places and climbed up on ladders and into trees to look at the views. It was crazy, a little bit beyond my scope, but I was excited to participate,” he says. Once they’d settled on a site, the design changed frequently as the owners and Ojala brainstormed. “Brian went to sleep one night and woke up and said, ‘We have to reverse the direction of the house.’ The original design was for a standard two-story home, but Brian said, ‘We have to pop the living room out and raise the ceilings,’ ” recalls the homeowner.

The design work continued on-site even after the walls were framed, posing some challenges for the builder in charge of making it happen. “But Bob Brown got it; he got the organic approach,” says Ojala. “We’d be on-site, drawing things on the backs of envelopes and scraps of paper with the carpenters and painters. That kind of process is difficult for builders, but Bob was integral to this work; he completely understood their vision. He put together a team of about 20 or 30 craftsmen who contributed so much to the project. It was like a creative incubator. I don’t think the house would have been as successful with another builder.”

Ojala and interior designer Cindy McCoy also credit the owners with the vision that allowed the team to create this extraordinary space: “They both worked with Brian during the architectural phase, put in many hours with me and many more hours with the builder. In all the years I’ve been doing this, I have never worked on a project that is so representative of the clients’ vision.”

“They are so educated, so interested in art and architecture and travel,” says Ojala. “For the first year while we were looking for a site, we met and talked about their kids, their philosophy, and traded information on favorite architects and sculptors and artists and music. They have so many interests and have traveled so much, you’d think they’d have so many things in their house, but they are purists. They are kind and down-to-earth. They love purity of form, purity of light and they wanted the house to be the furniture.”

“They wanted the house to be the furniture.” — Brian Ojala, Architect

The couple, in turn, credit the remarkable team of builder, architect, designer and craftsmen for their first home. “You hear a lot of horror stories, but for us building a home was a great experience,” says the husband. “Having a great builder is an excellent thing, and then Bob put together a great team of local people—craftspeople, painters, real artists. We’d say, ‘Just do whatever you want in here; do something you think would be cool,’ and they’d give us a sketch, and we’d come back and there would be something beautiful.”

“We’d say ‘Just do whatever you want in here; do something you think would be cool.’ ” — Homeowner

The wife agrees: “I could do it all over again. It was a wonderful journey, and we just happened to be blessed with having the best team. And while we love living here, it’s the experience that was the wonderful part of the project. That’s probably why this place glows; I think when you look at the house it glows with all of the love everyone put into it.” 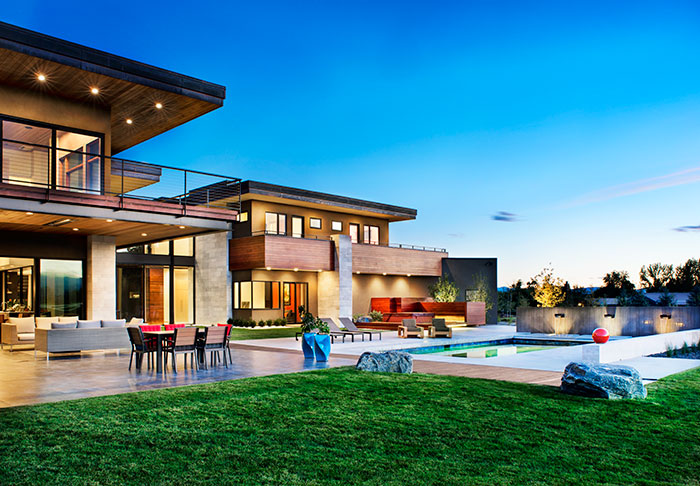 The multi-level roofs are a part of Ojala’s passive solar design. “I designed the roof overhangs calculating the altitude of the sun through the year, so in the autumn equinox the sun will slowly enter the house, warming the space, and in the spring it will slowly leave the house, keeping the home cooler.” The green piece was important to the homeowners . The husband researched solar energy systems and a solar panel system was added to the roof,  making for an electricity bill as enviable as the space. “The home is 120 percent powered by solar,” he says. “We’ve never had an electricity bill, and in the summer, our account is negative a few hundred dollars.” 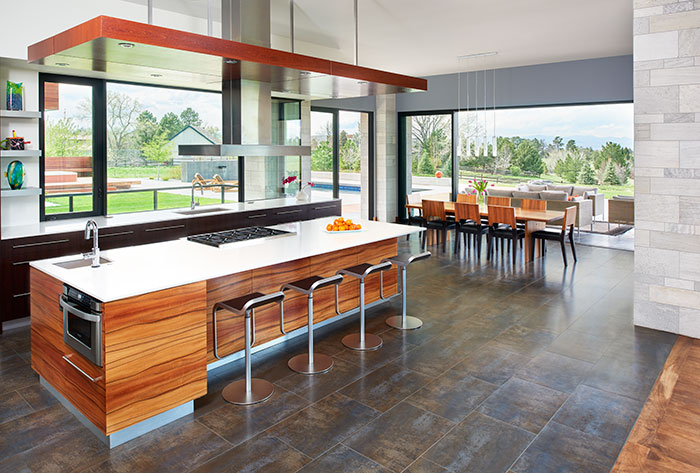 The mellow tones of the applewood island and the richness of the subtly metallic floor tile from Porcelanosa warm the modern kitchen. To keep the well-used space looking sleek and uncluttered there’s a serparate “scullery” for daily appliances and food storage. Dining table pendant lights are LBL from the Lighting Studio. 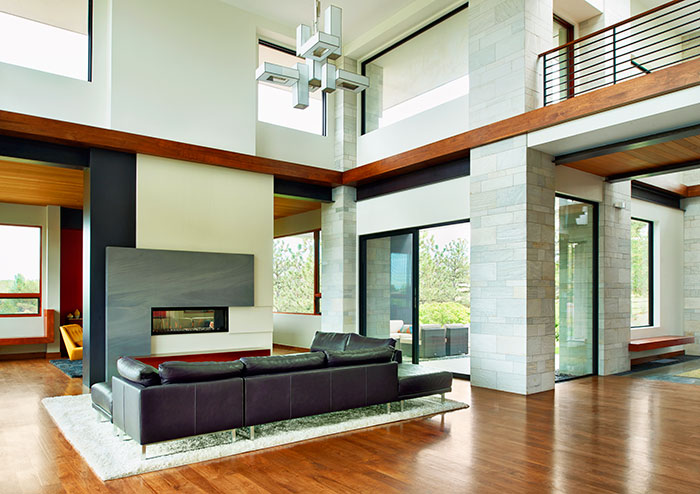 Designer Cindy McCoy is very proud of the living room fireplace façade. She was the first Coloradan to import these Neolith slabs from Spain through The Stone Collection. 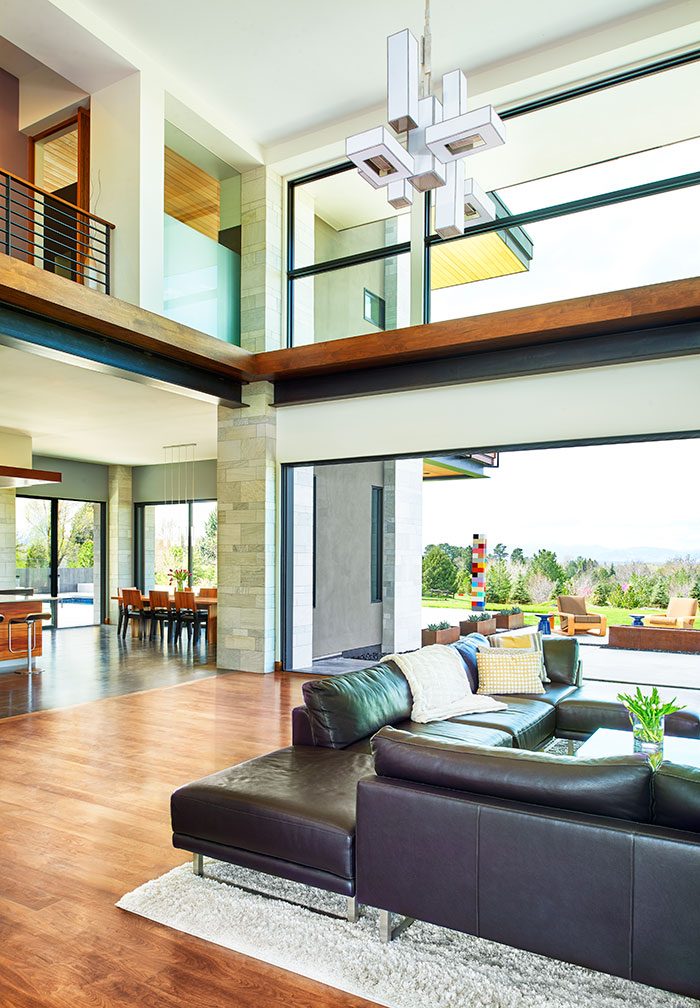 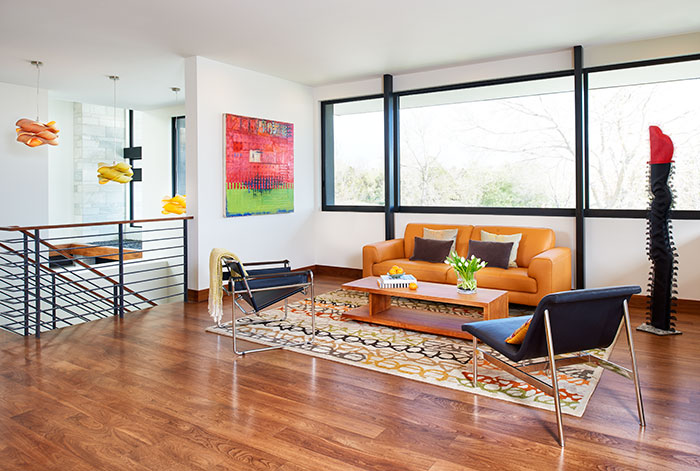 The sculptural stairway lights from LZF are handmade from wood veneer. The upper den atop the stairs  is the only communal space on the second floor. It’s situated between the master and the children’s wing of the house. The art at left is Numbers by Judy Campbell from Space Gallery and the standing sculpture is from Spark Gallery.

The first-floor hallway leads to a large hidden mudroom.  The geometric painting is Quantum Zone by Colorado artist Clark Richert. 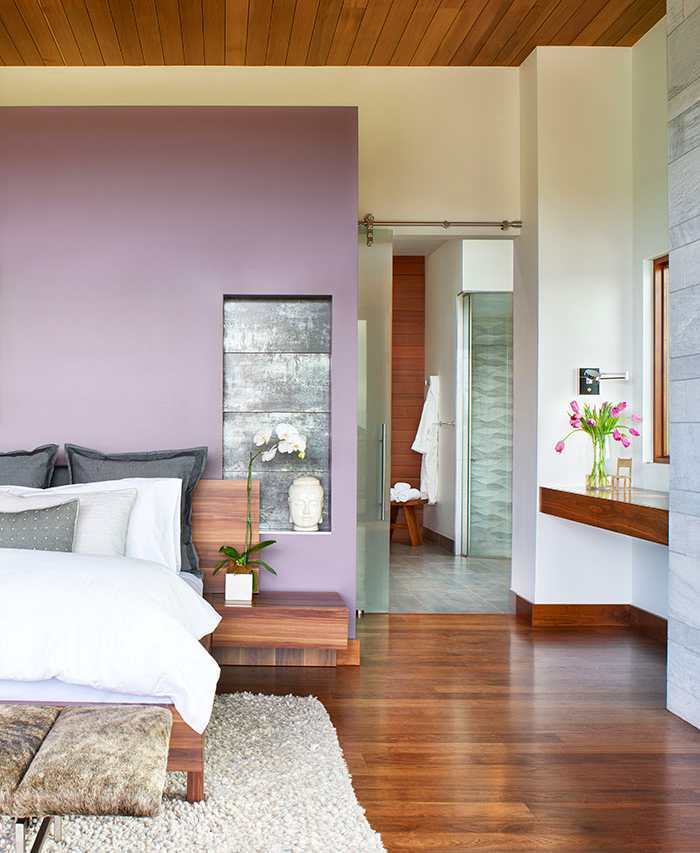 The master’s Zen is watched over by a World Market buddha. The hide bench is from Bernhardt Design and the textured  bathroom wall tile is Ona Natural from Porcelanosa. 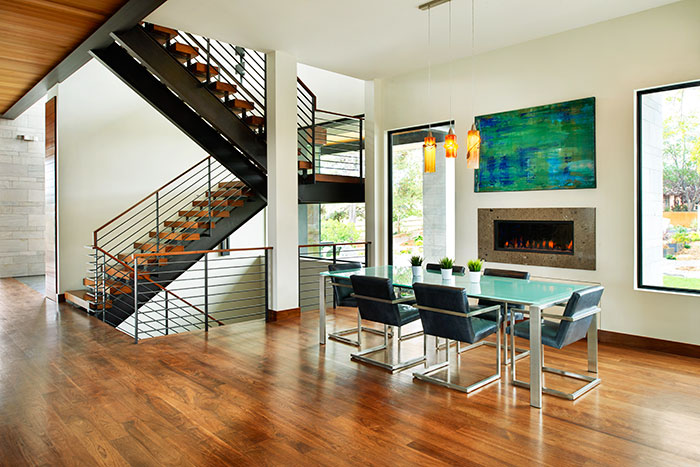 The formal dining room lights came with the owners—a previous gift from husband to wife. The table is Room & Board and the abstract artwork above the fireplace is by Koen Lybaert. 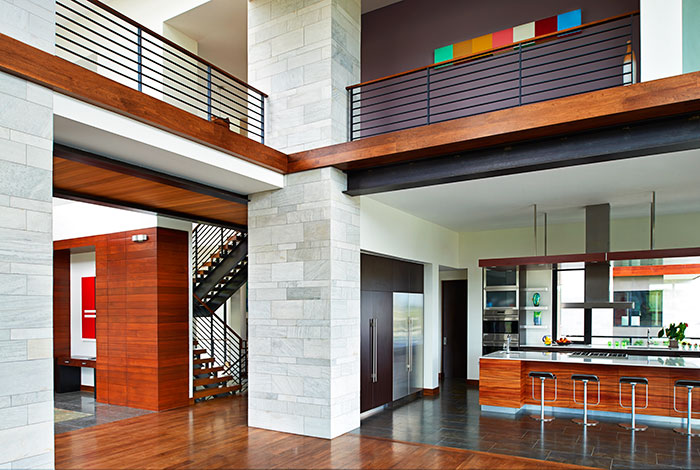 All of the common spaces in the home are punctuated by works from the homeowners’ modern art collection. The horizontal Pard Morrison color strip on the second floor walkway is from Rule Gallery. 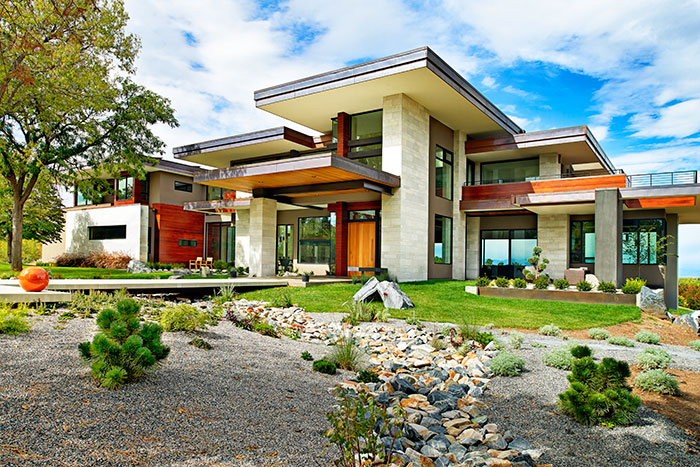 “Our on-site landscapers, Guerrero Marquez and Juan Chavez, came from Mexico and there was a language barrier,” says the homeowner, “but I would show them images of things I liked and we had this kind of mind-meld thing. I would leave in the morning knowing I’d come home from work and it would be perfect. They were just brilliant.”