2015 Home of the Year: A Cowboy Meets an Artist 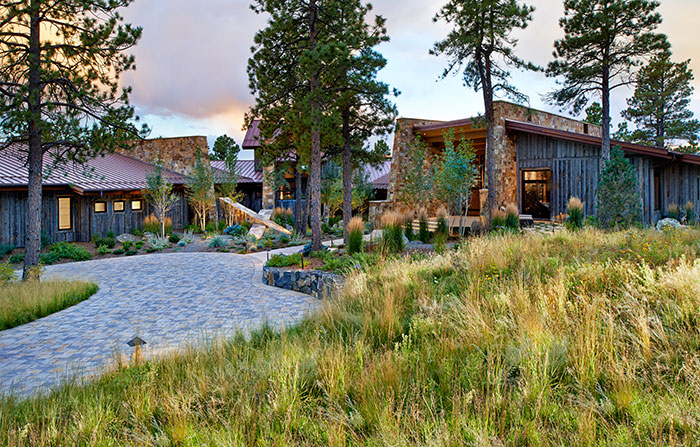 Yin met yang on a hilltop in Evergreen, Colorado.

That’s where Kirk and Grace Eberl—self-described “artist-yoga woman and Colorado cowboy-mountain man”—built their dream home, which is as much a case of “opposites attract” as the Eberls themselves: The house is light but muscular. Rough but luxurious. Sprawling but intimate. And because of that perfect alchemy, we’ve selected it as our 2015 Home of the Year.

The Eberls knew as soon as they met Boulder architect David Barrett, AIA, that he could help them make their unique vision come true. “I wanted someone who could do something outside of the box and be an artist with me, and I could tell right away that Dave was that person,” says Grace. “He’s so creative—and he listens so perfectly.”

The site the Eberls, both third-generation Coloradans, selected—after traipsing “miles and miles” over their 160-acre property to find a spot that was elevated but still nestled into the mountainside—had “unique potential: a meadow that rolls down into the forest, with quintessential Colorado views west to the Continental Divide,” Barrett says. Both he and the Eberls wanted the house to be inspired by the land it would sit on. “You have to listen to nature—the paths of the sun and wind, the views—and try to get it to respond,” Barrett says. 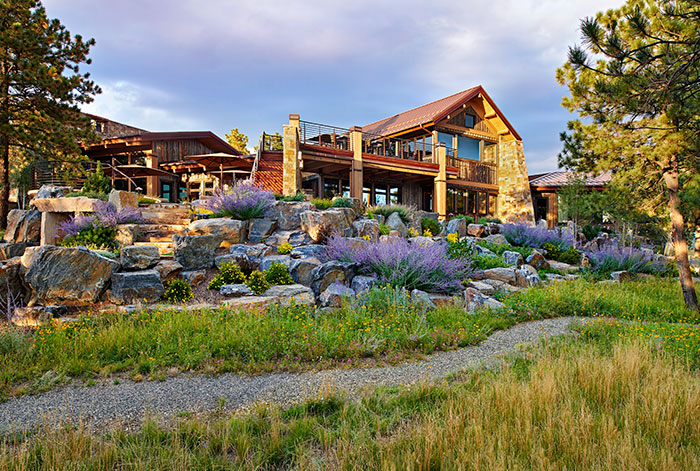 “We wanted a house that rose out of the land like a tree,” Grace says, “with one big heart-and-soul room as the main living space.” Also on the Eberls’ wish list: large, flowing spaces that combined “old” materials—hand plaster, flagstone, and masculine wooden beams—in modern ways; a deck where Grace could do sunrise yoga; his-and-hers offices with glorious views (Kirk works from home for his business, Eberl Claims Service, an “independent adjuster firm”; and a separate artist’s studio and barn, where Grace can paint on one side and Kirk can stable his three horses in the winter months on the other. Inspired by the old Forest Service lookouts, they also wanted a “guys’ perch”—a second-floor game room with pool table and shuffleboard (what Grace describes as “a cave in the sky”).

Finally, the couple pictured a romantic, sexy master bath where they could spend time together every morning. Grace and Kirk met 40 years ago, during their senior year at Arvada West High School, when they were chosen “Best Looking” couple. They actually weren’t a couple then, but quickly became one—and married about a year later, with Grace selling her old Triumph TR6 to pay for the wedding. From that point on, Grace says, “we did everything together,” including raising two children (Cody, 33, a professional golfer, and Lacey, 27, an actress, singer, and massage therapist). 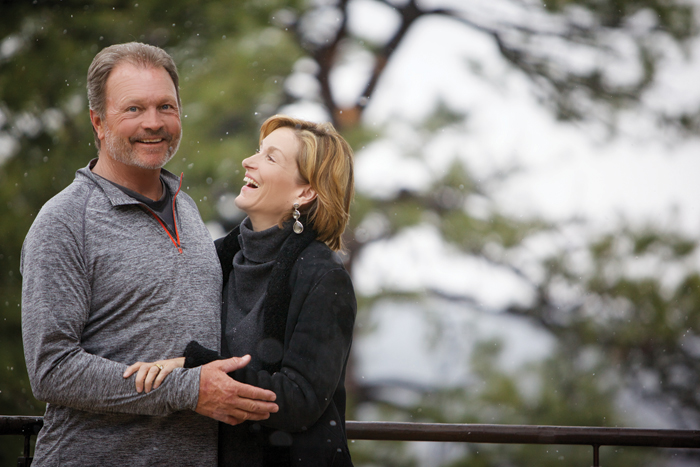 Kirk and Grace at home today (above), and as “Best Looking” (below) in the 1975 Arvada West High School yearbook. 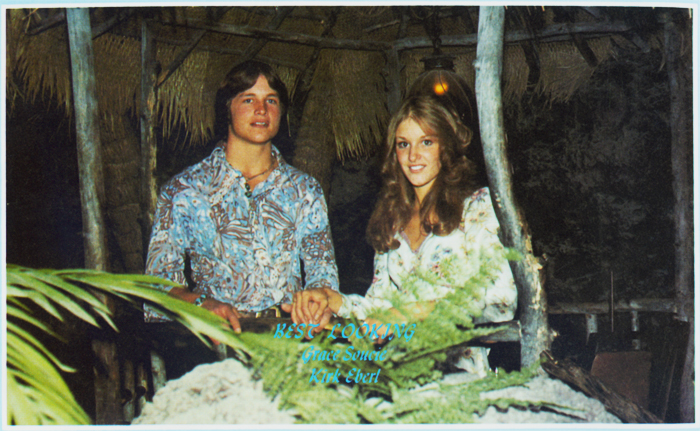 While the Eberls were talking about their visions for the home with Barrett, Grace even sketched out how she wanted the rooms to connect. “When Dave looked at the drawing he said it reminded him of the bones that run through a bird’s wings in flight—and that became the structure of the house,” she says.

“There is nothing square or rectilinear about this house,” Barrett says. “It has a special quality, looking inside out. When you step inside the front door, the walls radiate out from there—out to the views. It reminds me of slot canyons, where the light shines down through them. The house is like a series of geological events.”

But building on a sloping mountain lot had its challenges. Kirk’s brother (and best friend), Mark Eberl, directed  construction of the house, which was completed in 2012. “It was a very complex house to build,” Barrett recalls. “It looked like an anthill at times, like we were constructing Machu Picchu.”

Another challenge: How to build a big house—11,500 square feet total, with five bedrooms and six-and-a-half baths—and still make it feel intimate and homey. “We invented it together in both big gestures and small moments,” Barrett says. That included all the finishes. “Everything about the house—even the masonry and the way the steel beams are placed—is artwork,” Barrett says. “But once you get into a project like this, everyone brings their ‘A game.’”

As an artist with a strong aesthetic sense, Grace handpicked all of the important details throughout. “For each vendor, I had images of pretty much exactly what I wanted,” she says. “Like the Telluride stone [on the living room wall]—I drove by a building in Denver that had exactly what I wanted so I said ‘Stop!’ and took pictures—click, click, click. Then I researched where it came from. I did that with pretty much all the big items in the house,” including the blond flagstone in the main living area (Grace scrambled through a quarries near Loveland to find just the right pieces).

“There is only one house like this house,” says architect Barrett. And that is just what the Eberls wanted. “Kirk calls it his ‘fancy mine shaft,’ because of all the reclaimed wood we used,” Grace says. “But he and I are in awe of the community it took to create this house. And when we walk through it, we are in heaven. It’s paradise—an unbelievable dream come true.” 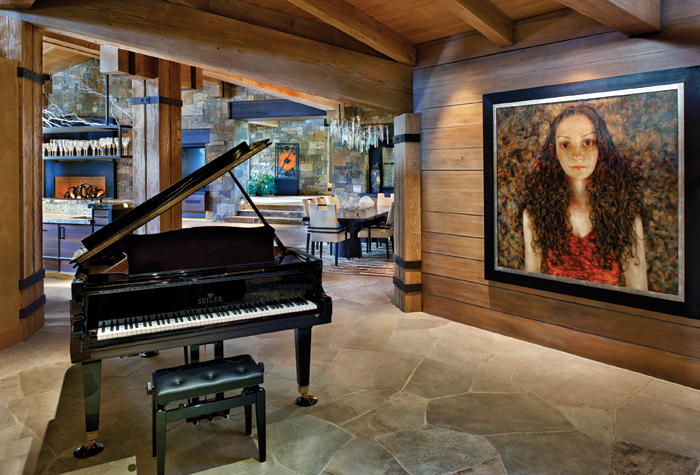 “When we have a dinner party,” Grace says, “someone usually gets up to play the piano. We have a bunch of hambones in the family! It’s always entertaining.” The painting of daughter Lacey is by local artist Lu Cong. 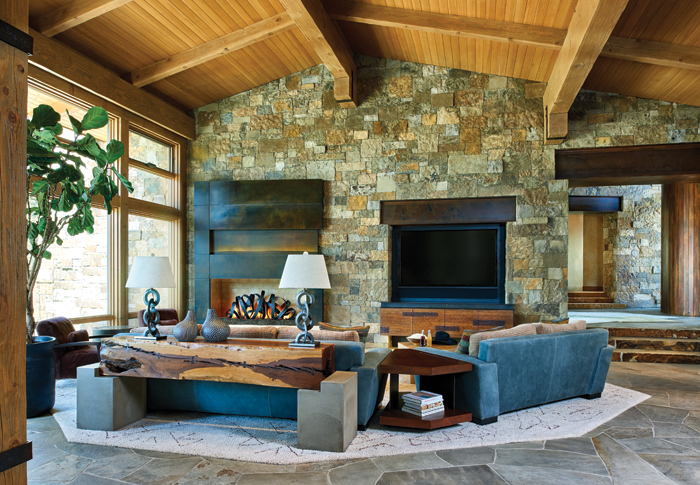 The Eberls love the earthiness and strong rectilinear look of the wall of Telluride stone in their great room; Grace visited quarries west of Loveland to pick just the right pieces of blond flagstone for the floor. The artisans of Fort Collins company Raw Urth created the intertwining metal ribbon in the fireplace. 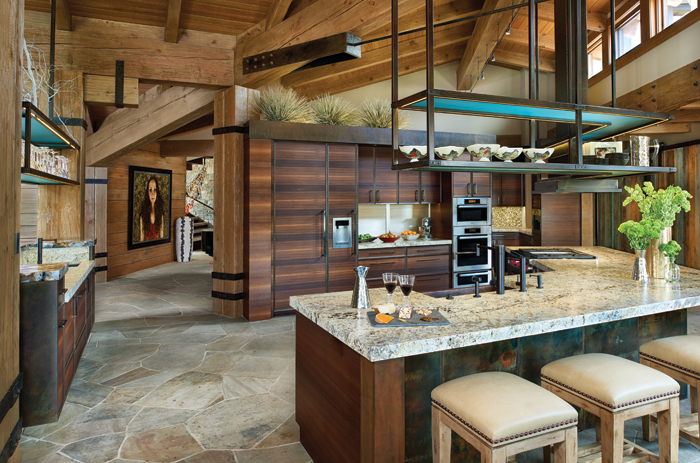 “Everything in the house wraps around the kitchen area,” says Grace, who chose a leathered granite for the top of the island and cabinets made of richly colored fumed larch. “I purposely made the kitchen very casual—I wanted to be able to put out tons of food, buffet style, and let people mingle.” 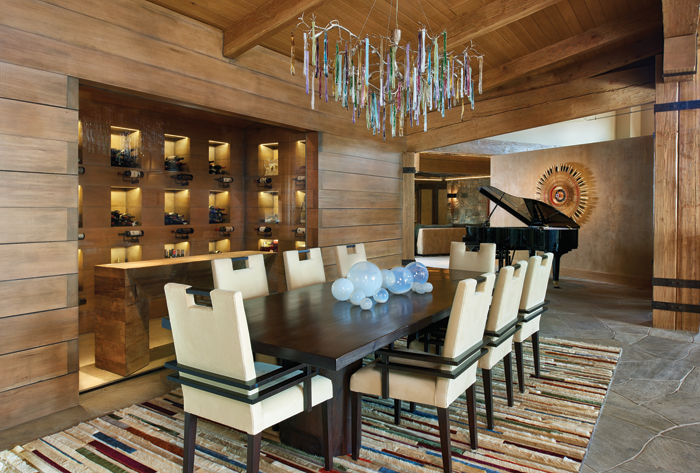 The dining table, which seats eight to 10, has a pick-your-own-bottle view into the temperature-controlled wine cellar. The rug, which is made of dyed strips of cow hide, “is modern but country,” Grace says. “It’s what I like: a contemporary use of an old, old material.” 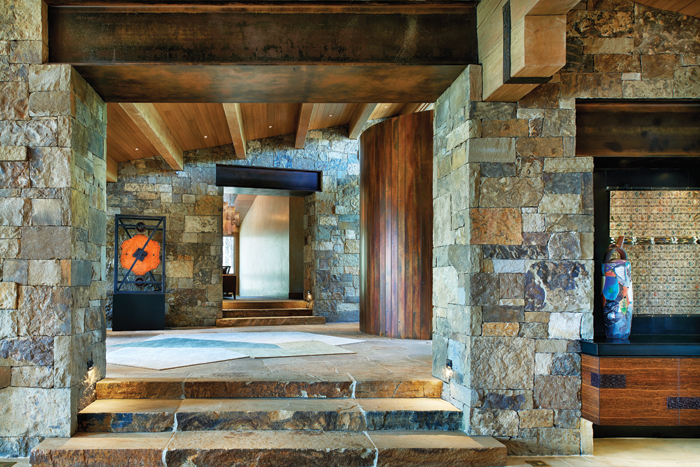 The entry hall includes a cylindrical coat closet to play off the house’s other angles. “When you step through the threshold of this house, you leave the world behind,” says architect David Barrett. On the far wall is the entrance to the guest wing, which includes three bedrooms. 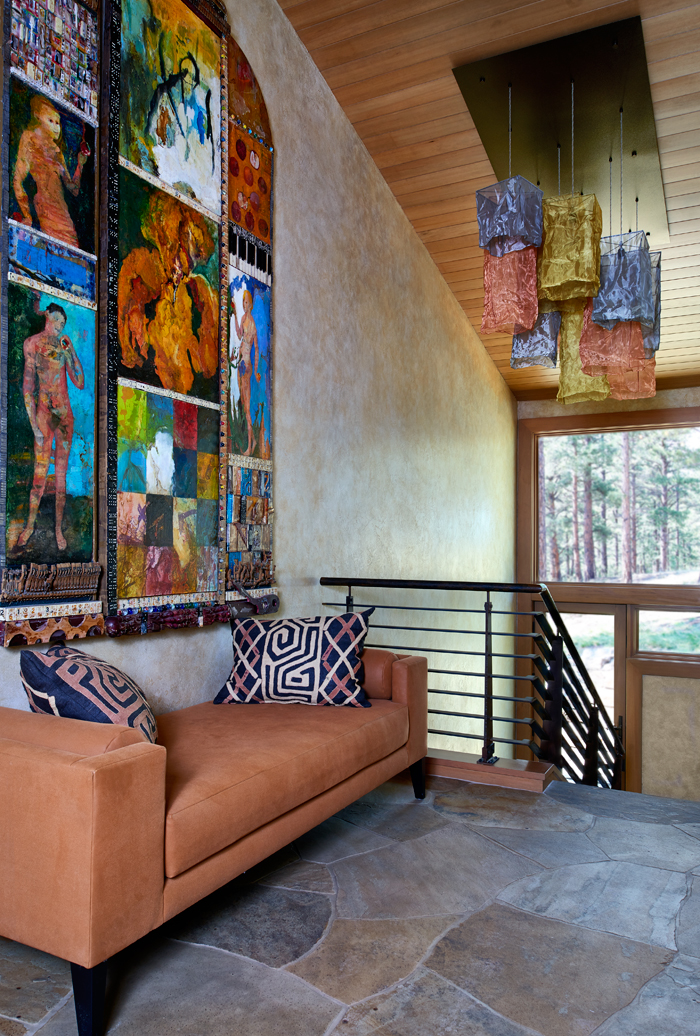 A large triptych, an assemblage by painter Patricia Nix, greets visitors at the top of the stairs in the guest wing. The whimsical chandelier is made out of copper- and gold-colored wire, crinkled and folded by Grace and interior designer Lance Fedderly to get the perfectly imperfect look they wanted. 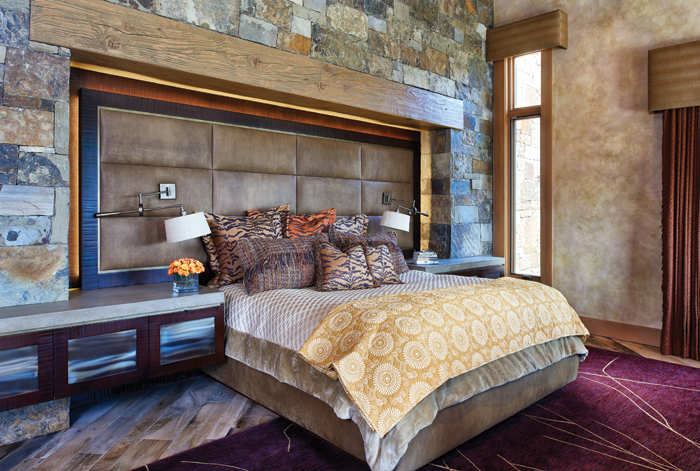 “We wanted to wake up looking west,” says Grace of the master bedroom. “This is Kirk’s and my morning meeting place. It’s a bit of a sanctuary.” The tall window on the far wall was added “so we could get even more fresh air,” says Grace, who dislikes air-conditioning. 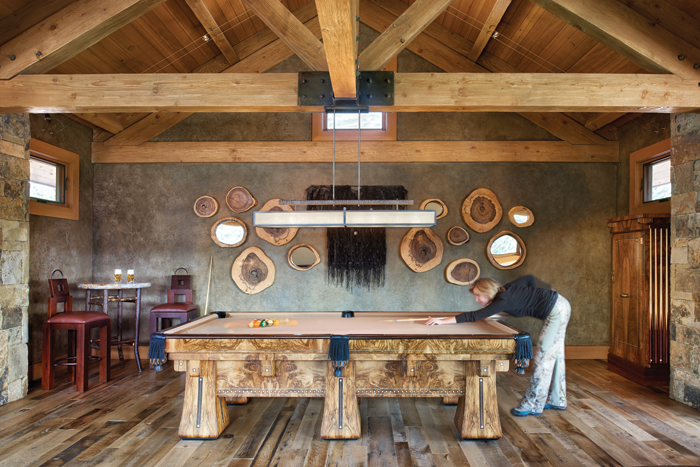 Grace takes a shot at the Brunswick pool table (“the only antique in the house”) in the second-floor game room, which has expansive views west to Mt. Evans. “I always climbed trees as a kid,” she says, “and I love the bird’s-eye view.” The room is “everybody’s hangout,” she says. “It’s where I do yoga in the morning—and where all the people who don’t want to do dishes come after dinner parties!” 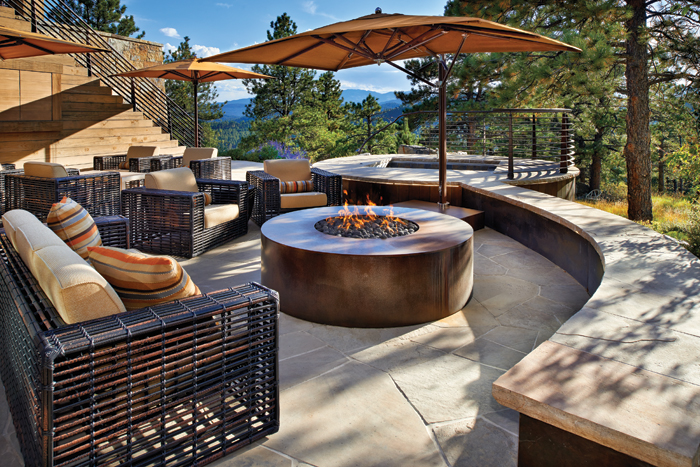 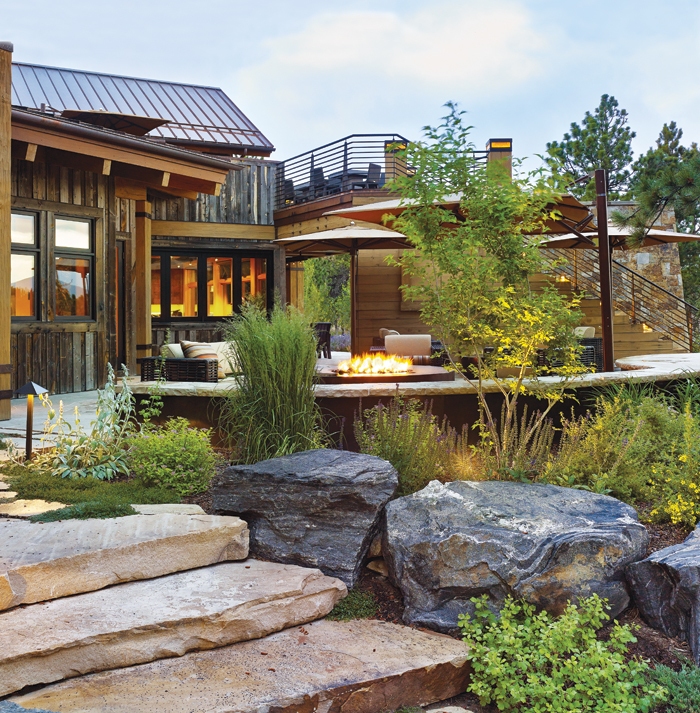 The deck (opposite) is a natural extension of this indoor-outdoor house: Doors open onto it off of the great room, the kitchen, and Grace’s office. 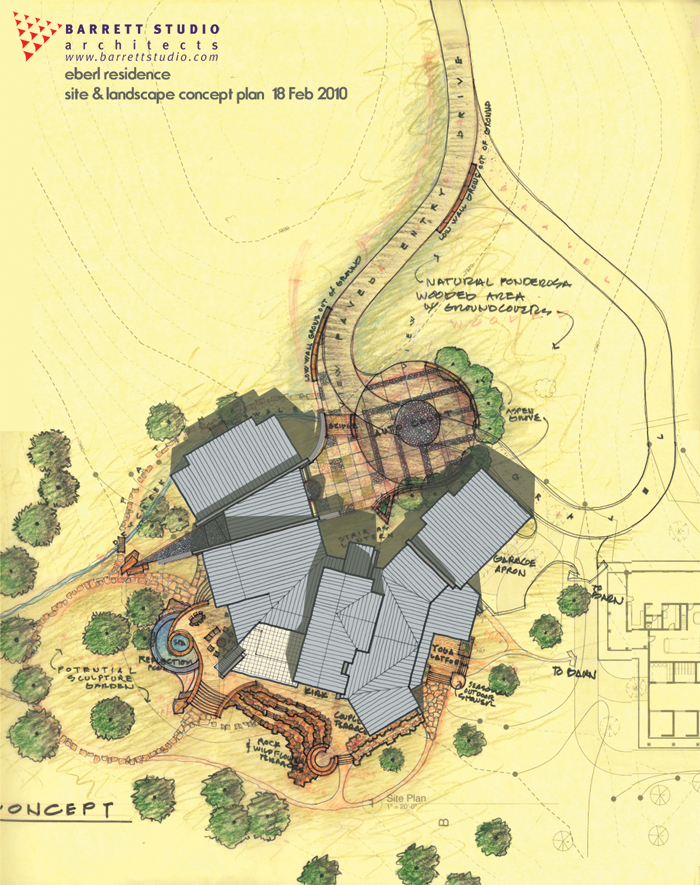