For a couple in Denver’s East 7th Avenue Historic District, a thoughtful redesign enhances the daily joy of the home they’ve loved for decades

An elderly gentleman in thick glasses and a neat V-neck sweater stands underneath an enormous pine tree, looking up through the limbs and dense needles at the puzzle pieces of bright sky above. “You just don’t see many trees like this,” he says of this majestic bit of mother nature that fronts his home, a stately brick presence on Denver’s distinguished East 7th Avenue Parkway. “It’s magnificent.” Watching him stand in appreciation, it is easy to imagine all the children who have played under its apron, certainly the younger two of his five. His need to share the wonder strikes a chord, a reminder of the importance of standing still and looking up at a tree. And he’s right. This one is magnificent.

He points out the spot where another pine used to stand that fell in a windstorm years ago, the dying apple tree they’re still trying to save and then the squirrel’s nest in the tree they can see from their bedroom window. It’s cold outside—so we make our way back up the steps to the front door, where his wife, a petite woman with light-blue eyes, is waiting with Nadia Watts, their interior designer.

The home was built in 1921, and the couple—both of whom grew up in the Denver area—has lived in it for decades, raising kids and hosting holiday gatherings. “We lived a block away before and always loved it,” the husband says. He tells me he used to walk by in the evenings when it was all lit up, and when they found out the owners were thinking of selling, they bought it before it ever went on the market. They went through one remodel that didn’t go well, and then brought Watts and builder Diamond Homes in seven years ago to redo what went wrong.

The home’s overall presence is one of comfort and memories—it feels elegant, yet lived-in and homey. Sort of shabby-regal, if that were a thing. The newspaper is still spread on the ottoman in the living room, between two china-blue and white couches. “We have coffee here every morning,” the husband says. The furniture is arranged to inspire both friendship over a drink and solitude with a book (he is a voracious reader, mostly of history), and every room invites you to sit down and stay awhile. “We use every bit of this whole house,” the wife adds.

The colors are traditional—yellow, blue, red—and Watts’ employment of them is both subtle and bold. Throughout the home, Watts played with the paint, either adding texture for more depth in the deep-red dining room (“My wife loves red,” the husband says) or, in the living room, going a shade darker in the sleeping porches, where the light streams through the walls of windows. “That’s why we bought the house,” the wife says. “We both love the light.”

Thick, luxurious draperies frame the windows, grounding the sun-drenched porches and, along with the antique books and china in the bookcases, adding to the Old World feel. “I love to watch the birds,” the wife says, peering out the window of the rear sleeping porch. “Oh, I think that one’s a finch!”

We stop on our way to the kitchen to look at some of the family photos that grace every tabletop. The husband points out a picture of two young and fit climbers, dressed in ’70s clothing, standing atop a peak. “That’s us on top of the Grand Teton,” he says. “We climbed that one four times.” The wife’s face softens, and she says, “I didn’t climb at all until I met you.”

We still have the upstairs and downstairs to explore, but the husband stops at the stairs in the entryway, crowned by original wrought-iron balustrade, and runs his hand on the buttery-smooth wood railing. “To walk downstairs in the morning and put your hand on something that’s done well, it can change your whole attitude,” he says. “That craftsmanship is something I feel every day.” 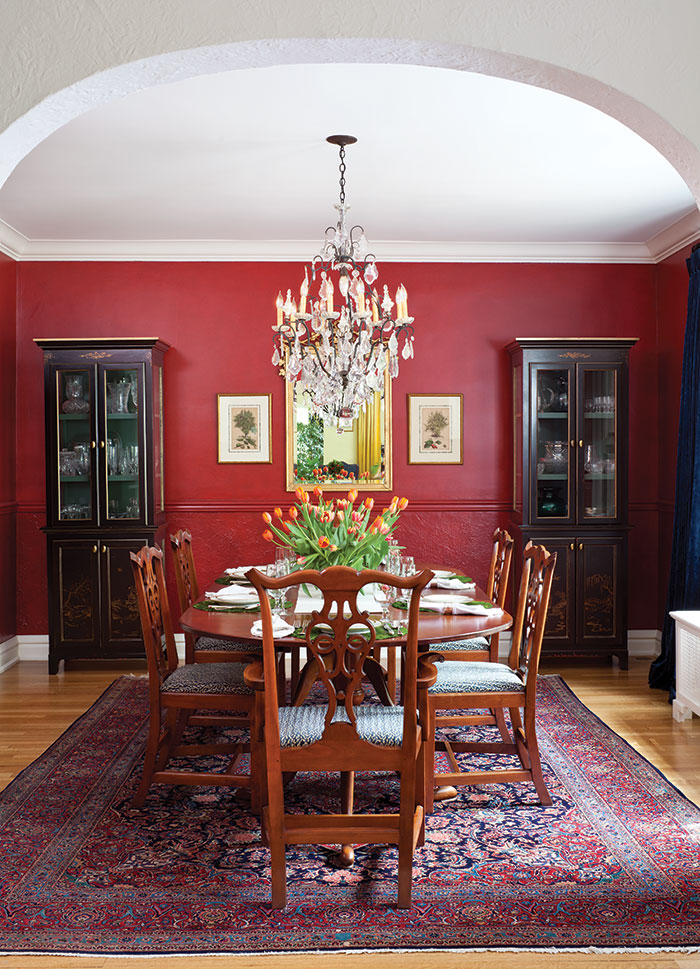 “We updated the dining set they had owned by adding an animal-print, blue-and-cream fabric to the seats of the chairs,” Watts says about the classic, deep-red dining room, painted with texture to give it more depth. “With the dining room being its own separate entry, we were able to switch the color.” The chandelier is an antique from Paris that the couple owned previously. 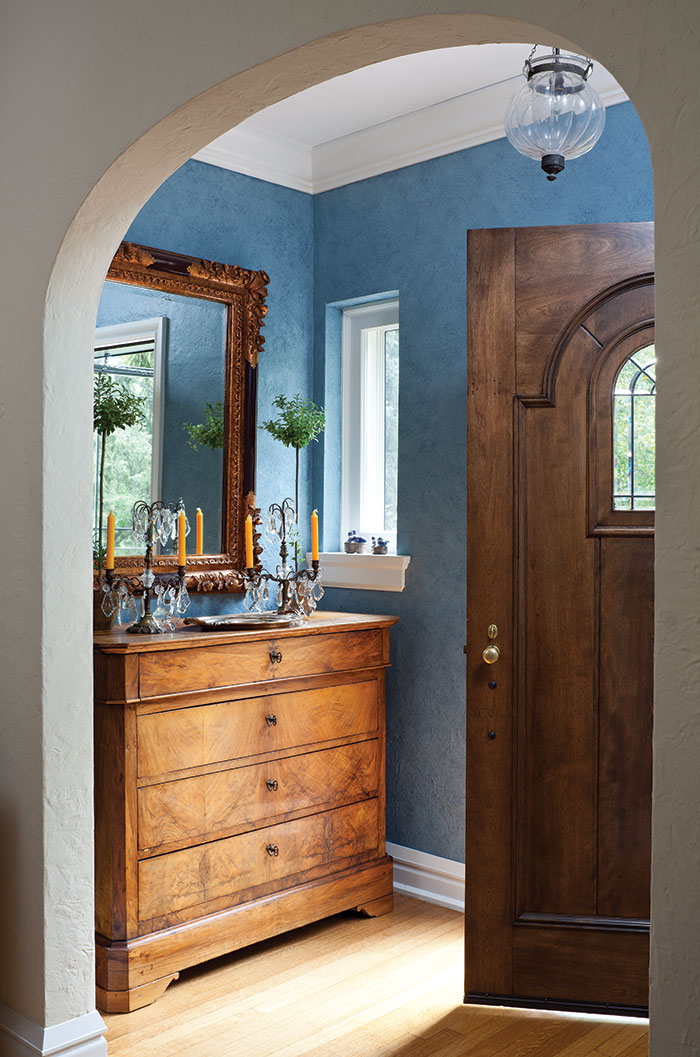 Watts opened the home with a deep, textured blue. The light fixture is from Eron Johnson Antiques, and the chest and mirror are family antiques. Not pictured, hanging on the opposite wall, are antique puppets from Burma that belonged to the homeowner’s father. 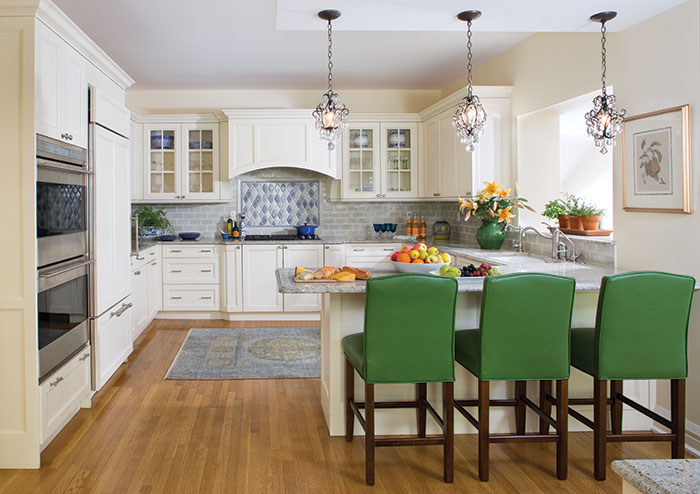 Watts and Diamond Homes completely redid the kitchen, removing the cramped center island and extending the counter in an L shape. They moved the sink to the opening that looks out onto the family room and put the range on the wall with a hood. “It’s a much more functional layout,” Watts says. “Before, there couldn’t be more than three people standing in the kitchen.” Watts chose Kashmir white granite for the countertops. The pendant lights are from La Cache, which donates 40 percent of proceeds to Children’s Hospital Colorado. 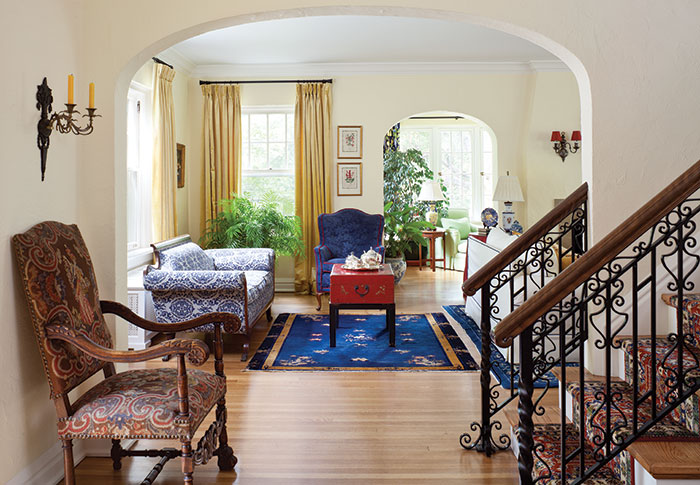 Interior designer Nadia Watts chose floor-to-ceiling drapes from Brunschwig & Fils, with a thick, velvety brush that changes color and adds dimension. “It’s a nice way to finish off those windows and bring some elegance to the space,” she says. She opted for a creamier color on the wall to balance out the strong colors of the furnishings, “so you’re not faced with high contrast when you’re moving from room to room,” she says. “It lets the antiques, art, furniture and fabric stand out.” 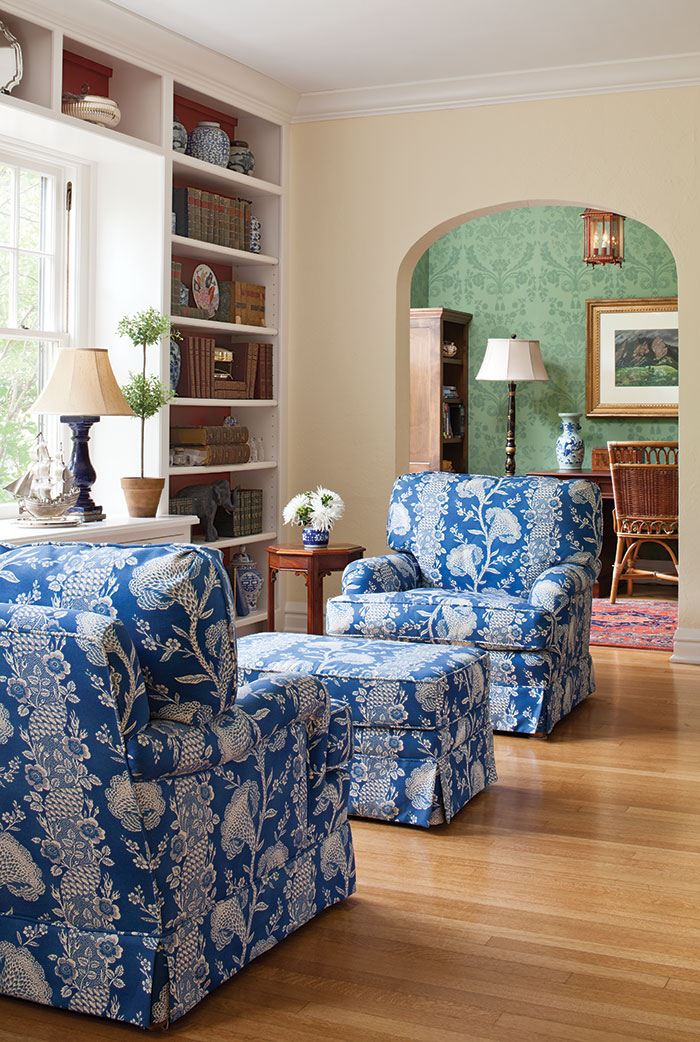 This sitting area, just to the side of the main living room, is where the couple enjoys their coffee and newspaper every morning. Blue-and-white china on the bookshelves and in the husband’s study beyond echo the chair’s dominant pattern from Brunschwig & Fils. The wallpaper in the study is from Farrow & Ball. 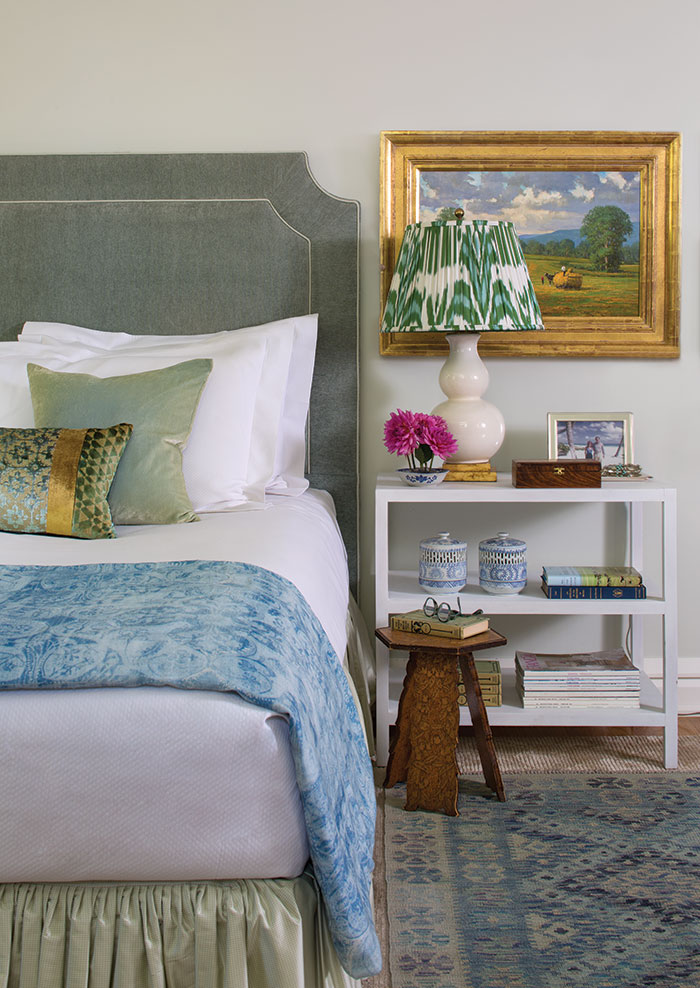 Watts and contractors Ed Diamond and Brian Husmann from Diamond Homes combined the original master with another bedroom upstairs that the couple no longer needed. Watts kept the colors within the primary color scheme of the rest of the home but went with much softer hues. “We wanted it to be a calm retreat and not too bold,” Watts says. The paint color is Benjamin Moore Woodland White. 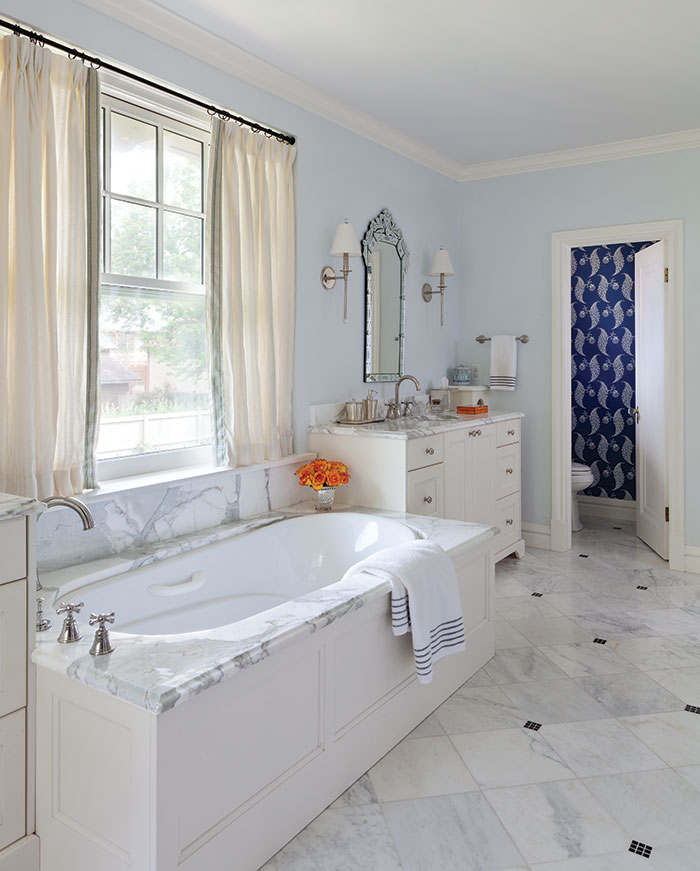 Watts chose Calacatta Gold marble, which graces the floor, free-standing tub and two vanities (one not shown). The shower (also not shown) has a steam jet. The mirrors are from Wisteria, lights are from Waterworks, and the blue wallpaper is from Farrow & Ball.

The couple, who used to live a block away with their family, loved this house for years before making a move to buy it. “When you walk by at night, the lights on the inside are spectacular,” the husband says.