This Mountainside Home is Perfect for a Party

Some people know how to throw a party—and then there are the Flahives, who designed their home for it. When they decided to move from Denver to the foothills of Littleton, they wanted their manse to be a hub for crowds as well as intimate gatherings. As the director of a nonprofit and a self-described avid host, Katherine Flahive says fundraisers or parties mean crowds of up to 150 on a monthly basis. Most of the time, though, she and her husband, Roger, entertain smaller groups for progressive dinners all under one roof.

“We spend our whole evening just spreading out and having a good time,” Katherine says. “I’ll serve hors d’oeuvres in the kitchen nook; then we move outside up to the trellis, where we’ll toast with Champagne, then come back down and have a seated dinner before drifting off to the living room for a while for a drink then dessert.”

“Our house isn’t the kind of house you stop by; it’s one that you experience.” — Homeowner Katherine Flahive

As native Coloradans, both Katherine and Roger were familiar with the Deer Park Valley area and found the 27-acre lot on a hike. As soon as they bought the property, they called architect Kathy Jones of ArchStyle, who had renovated their Denver residence and had become a close friend.

“We wanted to build the last house,” says Roger, “so we built everything into it that we thought we would ever want.”

The Flahives worked with Jones on every detail—from the siting of the home for spectacular views down to the organization of cupboards and the furnishings and art. “She knew us, and she designed a house that she thought we would like,” says Katherine.

As it turns out, it’s a home that everyone else loves, too. “The house is so much more fun when it’s full of people,” says Roger. “That’s when it comes to life.” 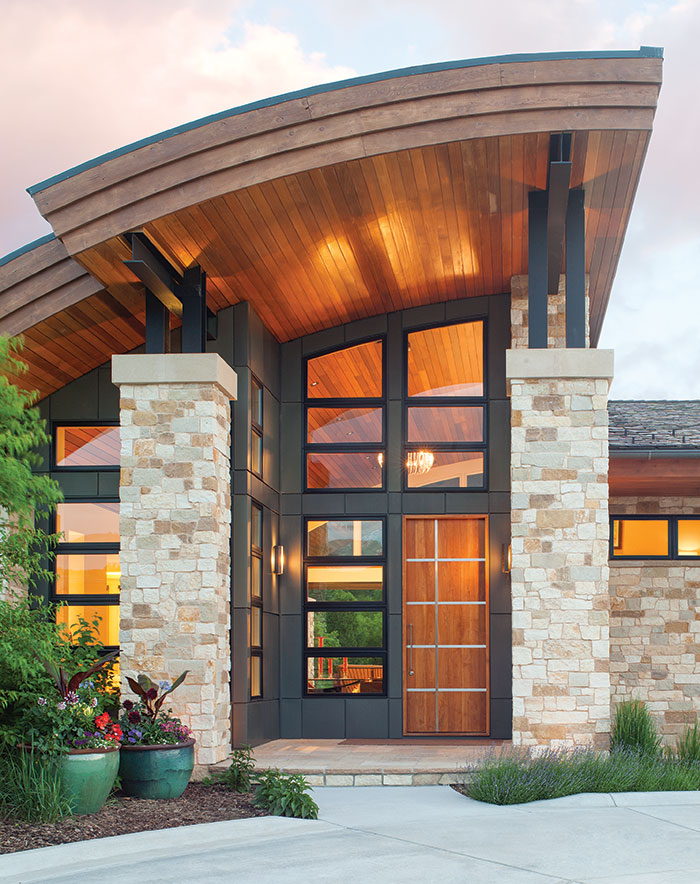 From day one, the Flahives wanted a mountain house constructed with all natural materials in a contemporary style. Architect Kathy Jones sourced sandstone for the façade and slate for the roof tiles, and opted for a more modern take with the use of steel beams. Details such as the arc were inspired by the surrounding rock formations. 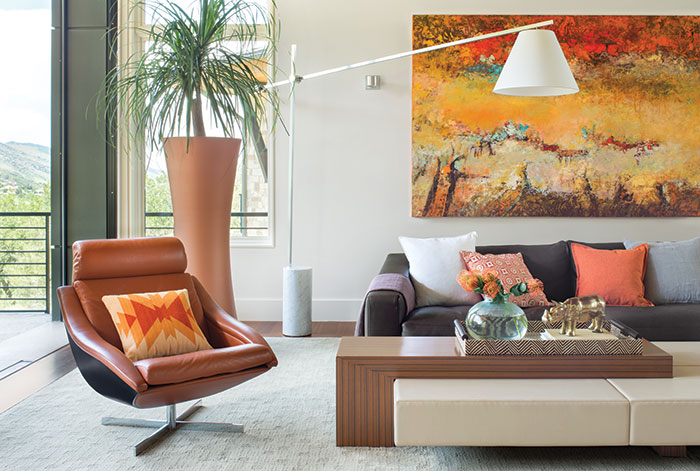 Weiland doors that slide out of sight create a perfectly airy living room. Jones mixed pieces such as a Roche Bobois swivel chair with the leather sofa by ddc and added a cocktail ottoman in mixed wood and upholstery to keep the vibe casual. Pops of orange from the Citizenry and Crate & Barrel pillows play up the colors in the Tracy Lynn Pristas work, titled Something Obsolete. 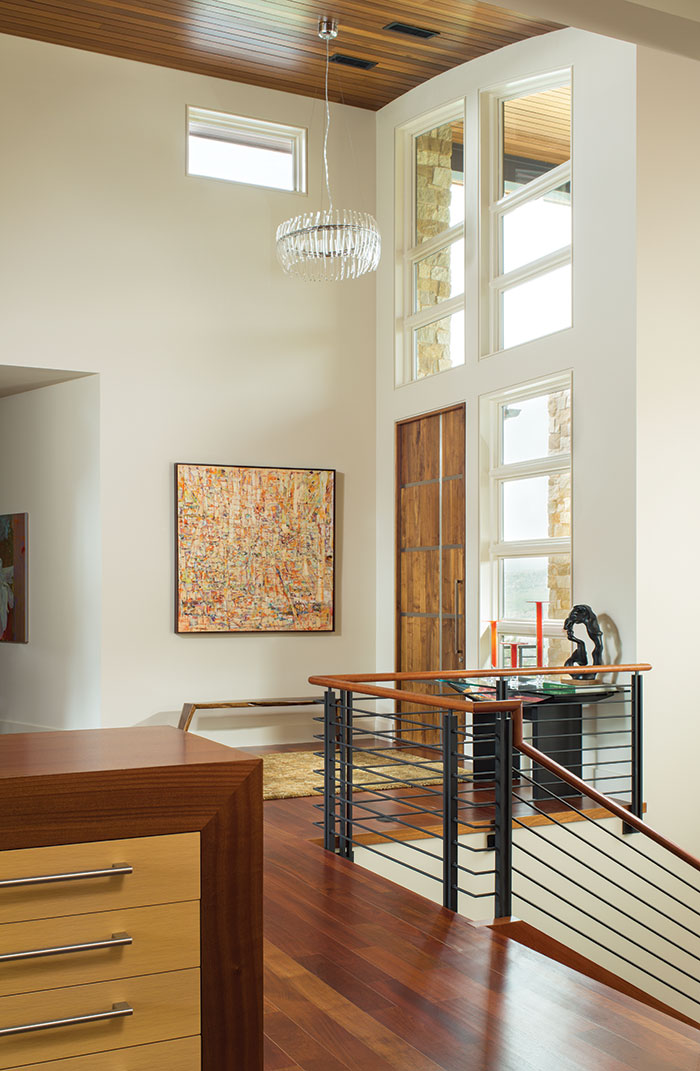 Guests are greeted in grand style with soaring ceilings clad in meranti mahogany. Jones, ever fastidious with the details, designed the massive walnut door to have an inlay of stainless steel that mirrors the grid pattern of the window. Hidden Trees by Silvana Ravena hangs above the bench. 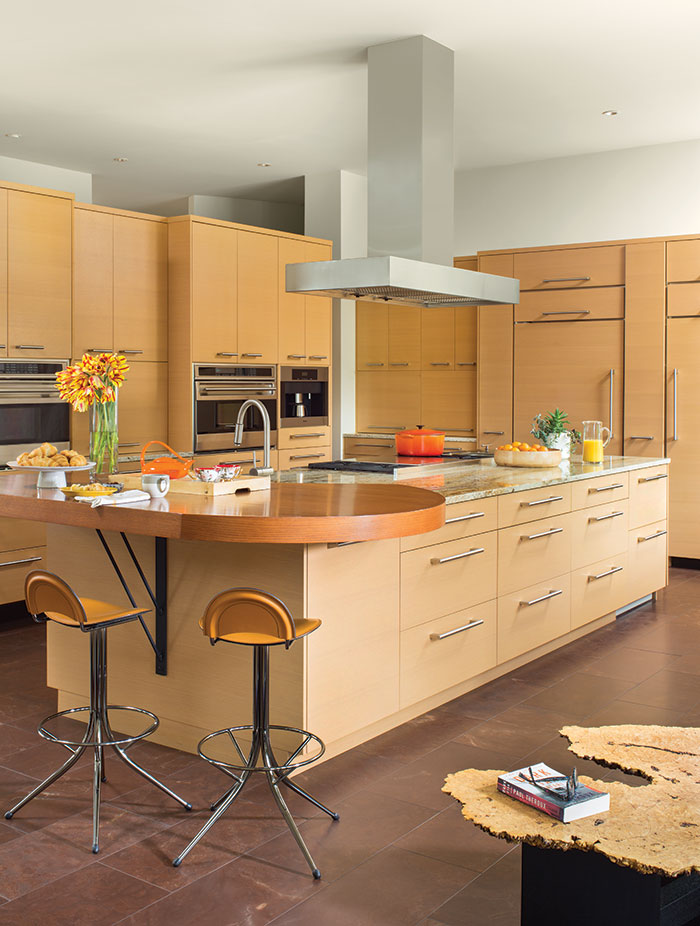 “There is pretty much every appliance known to mankind here, and they aren’t just for looks; they get used,” says Jones. Nearly every item, aside from the Wolf range and ovens, is concealed behind rift-cut oak cabinets. At the center of the room, the oven hood was custom made by Wainright Metals. 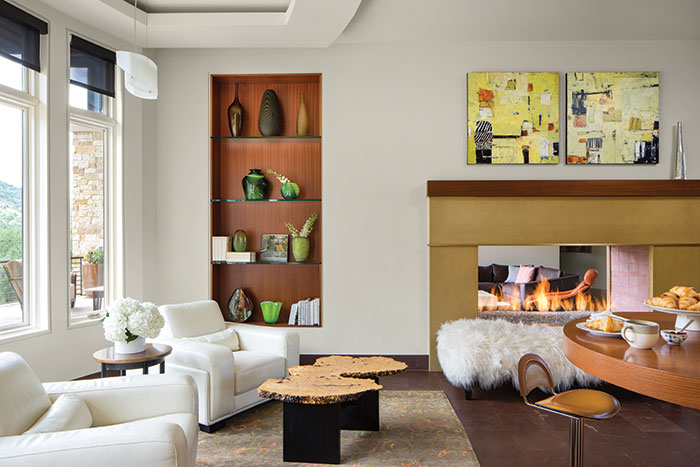 The kitchen and living room are connected by an open fireplace by FireRock, and the coziest seat in the house is on a Crate & Barrel bench re-covered in sheepskin. 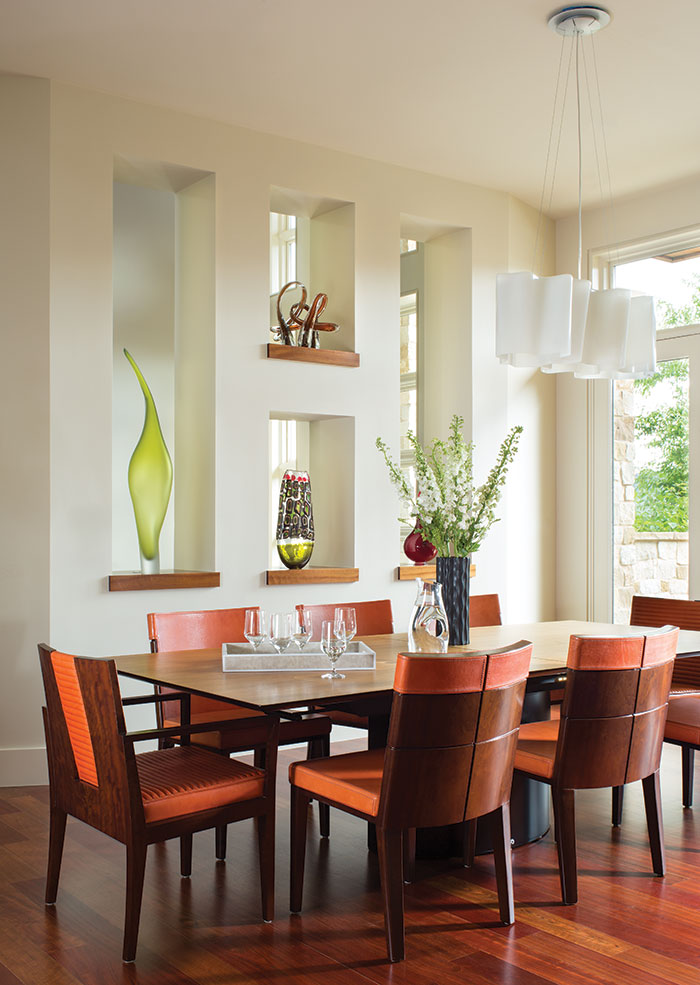 The open cubby spaces between the entry and dining room were always a part of the plan. “The glass is natural in color and bright, shiny and transparent,” says Katherine. “That is what helps that open feeling. That’s what makes it so beautiful.” An Artemide pendant amps up the glamour above the Adler dining table from ddc. The wood and leather dining chairs are from Moura Starr in Los Angeles. 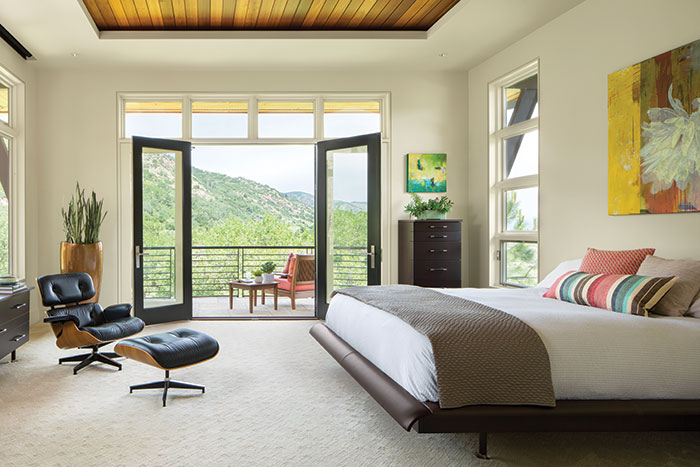 “From the bed, you’ve got two different views, and from the Eames lounge chair, you’ve got the third,” says Jones. The upholstered bed is layered with a Coyuchi duvet and pillows by Annie Selke for Pine Cone Hill. Exposed by Tracy Lynn Pristas hangs above the leather-wrapped chest by Roche Bobois; the artwork above the bed is Melt by Ron Trujillo. 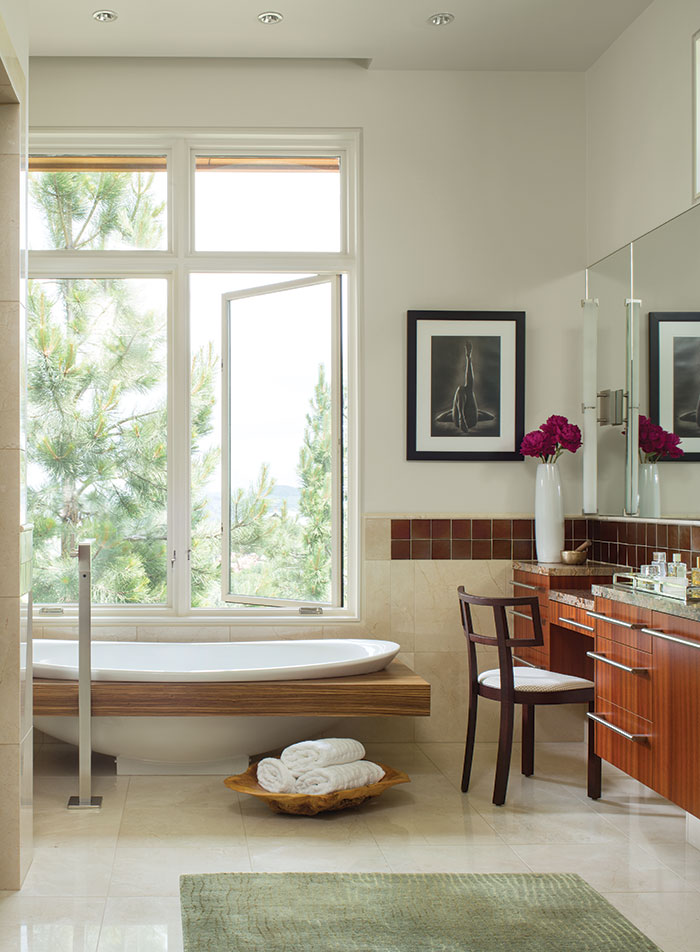 Jones designed a Zen-like spa for the master bath, featuring a wood and porcelain Lacava tub with streamlined Hansgrohe fixture. The flooring is Crema Marfil marble and the cabinets are vertical-grain mahogany. A photo of the homeowner by Body Photage hangs in the corner.