The Renovation of a Century-Old Denver Bungalow

Talk to Bev Strok for more than 10 seconds and it’s apparent that this mother of four is brimming with spunk, enthusiasm, humor, and insight. “I’m a little bit country,” she says describing herself with a laugh. “Also, a little bit rock ’n’ roll.” So it makes sense that once the youngest of her brood went off to college, Strok needed a fresh nest upon which to build her next act. She found it in a 104-year-old, two-bedroom, one-bath property with a wide front porch that she has dubbed “the chubby bungalow.” 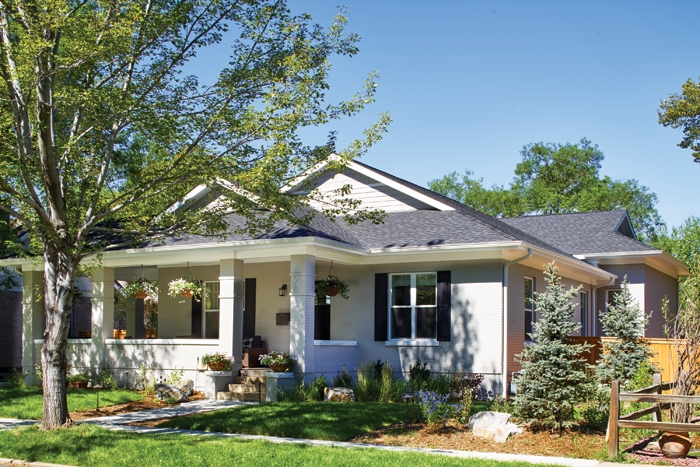 Situated on three city lots, the house came with assets aplenty. “It just felt comfortable and inviting,” says Strok of her initial impression. “It had everything I was looking for—flow, bones, spirit, and a great porch.” Strok, who had raised her kids in the suburbs, also loved that she didn’t have to get into a car for a walk in Wash Park. To assist in the top-to-bottom renovation of the classic compartmentalized floor plan, Strok recruited friend and architect Kathy Jones of ArchStyle and builder Pinnacle Properties of Colorado. In the end, she says, “it became spectacular.”

“Now, you walk through the front door there’s  a feeling of openness and light, and there’s good energy,” Strok says of the spaces that flow seamlessly across the front of her home. That good energy comes from a collaboration of 12-foot ceilings, tall windows with transoms, and—thanks to an absence of walls—direct sight lines through the living and dining areas and kitchen. 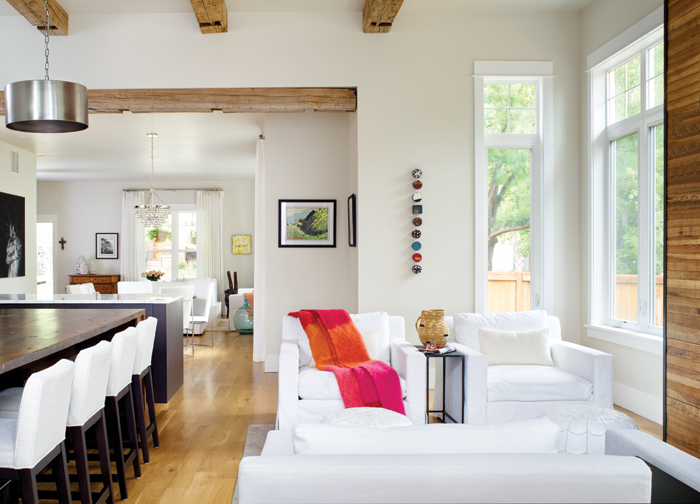 For Strok, a design concept that focused on gathering people was paramount. “A house becomes a home when the voices come in and out,” she says. “It’s a sacred place.” The reborn bungalow offers plenty of comfortable spaces for her large circle of family and friends to commune—both as one large party and as small, intimate groups. Beyond the living area’s sofa and chairs, a round dining table seats six and a hearth room gathers four upholstered armchairs around the fireplace. The kitchen’s two islands, both offering barstools, invite visitors to grab a front-row seat to watch the chef at work—Strok is known as a fabulous cook. “With a floor plan like this, she can have the intimacy of her dining room, but there is other seating, and everyone is still in the same room,” Jones says. Strok agrees: “It is so conducive to everyone being together.” 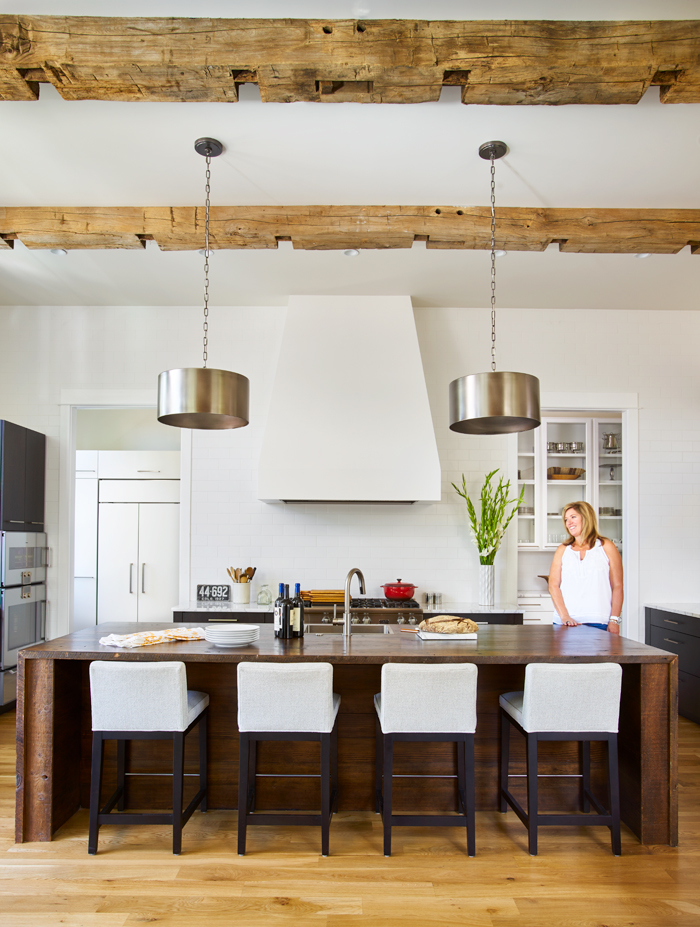 The kitchen’s design establishes it as the bungalow’s visual centerpiece. And “it is the absolute hub of the home,” Jones says. The range wall, clad in large-scale white subway tile and featuring an oversize white hood designed to visually recede, takes a backseat to the waterfall-edge wood center island. “We planed and straightedged the home’s original floor joists, and then finished with a stain and dark glaze,” Shawn Lowe, owner of Pinnacle Properties, says of the custom piece crafted on-site. 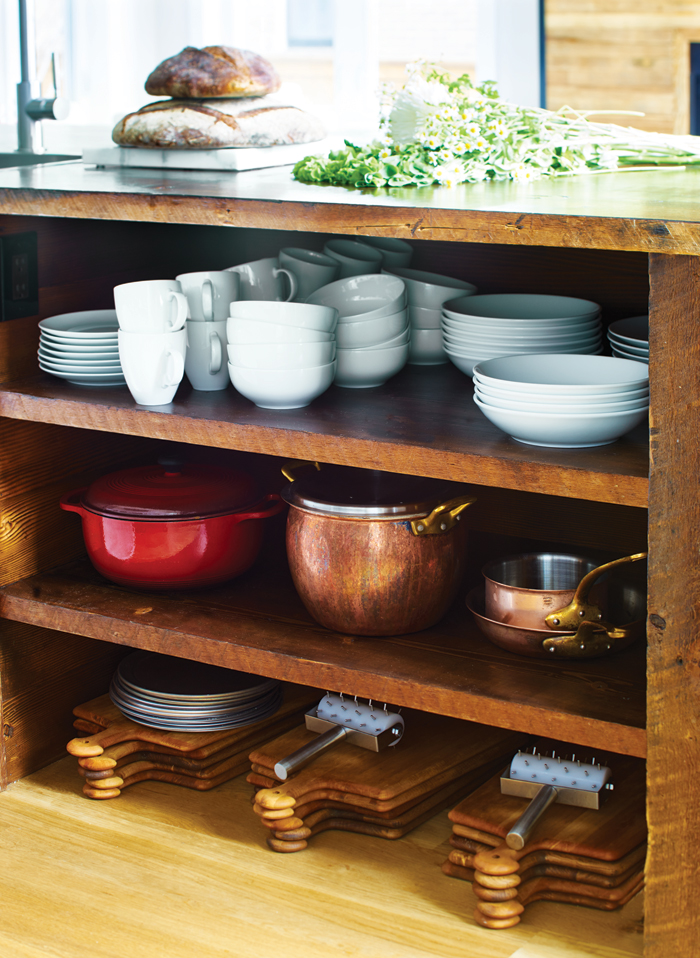 On its working side, the wood island is outfitted with a sink and open shelving for easy access to dishes, pots, and pans. A second island offers even more countertop space and barstool seating between the kitchen’s work area and the dining table. A second sink, dishwasher, and set of wall ovens are situated along the exterior wall. The pantry, a narrow space behind the range wall, holds the refrigerator, open shelves crafted from the home’s original bricks and joists, cabinets with doors made from original window frames, and even more counter space for Strok’s culinary adventures. “When my daughter comes home, we try new recipes together. She can be rolling out pasta, and I can be doing something else,” she says. “It works well as a community kitchen with a lot of people helping, and it works well when it’s just me, too.”

Jones says those seemingly opposite ends of the design spectrum—“the ability to live smaller day-to-day, but also to be accommodating when family comes and have space to be together”—were the driving force behind the bungalow’s showstopping renovation. Recently, Strok relished the beauty of the room’s design when her son and nephew were over. “I prepared supper on the wood island, and they sat there and we laughed and talked and listened to music,” she says. “It was one of those moments where I said, ‘Yes. This is exactly what I was hoping for.’”

Strok adds that the bungalow’s new life is steeped in “rebirth” in a way similar to her own new life—from a mom with a suburban house full of teenagers to a woman with grown-up children who visit for special occasions. “This is the first home for me as my kids move into their own adult worlds,” she says. “This is my nesting place.” 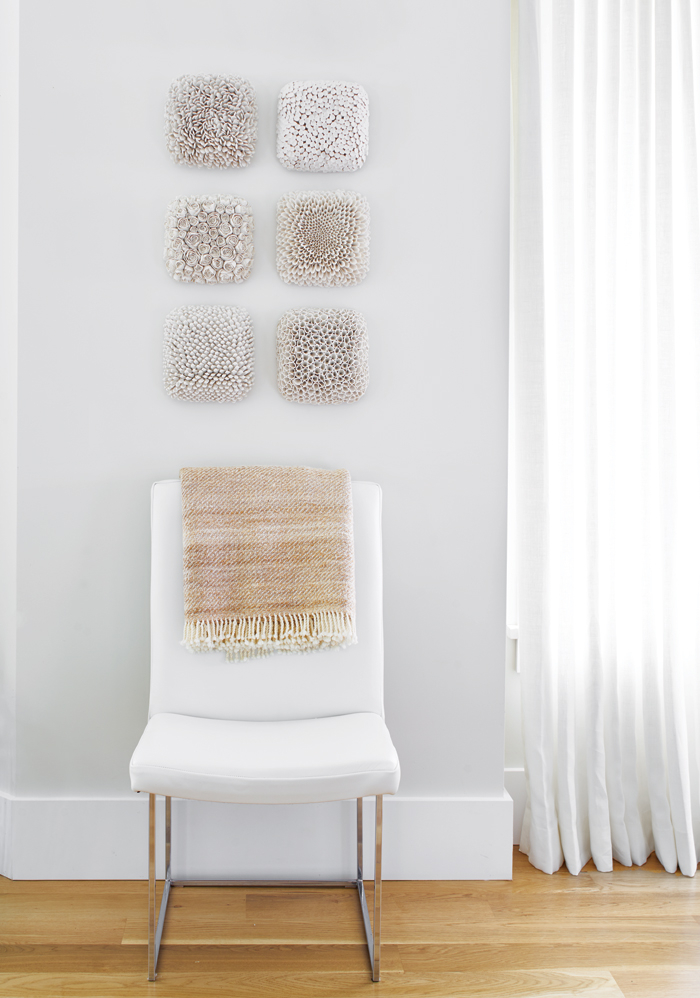 The home's subdued color palette creates the perfect gallery in which Strok can display her extensive art collection. The six-piece flowers-and-plants composition (above) is from Asheville, NC artist Heather Knight.

A striking pair of antique doors from an old Mexican church divides the living area and entry from a guest room. 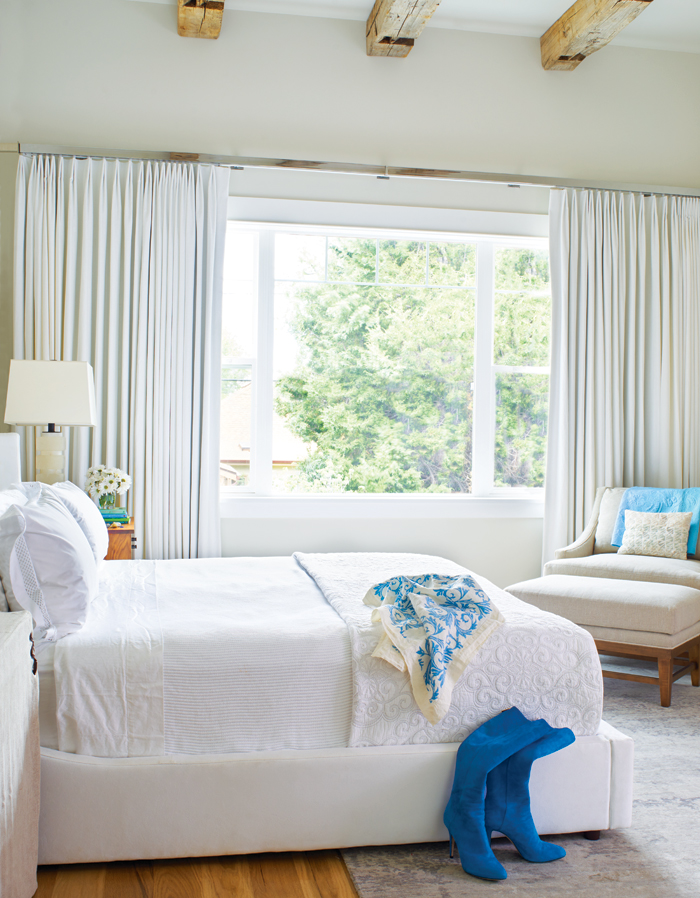 "We expanded the main floor to a total of 2,335 square feet from the 1,650-square-foot original floor plan and opened all the walls of hte existing structure," says Jones. The 24-foot by 50-foot addition to the back of the house frames the master suite—bedroom, bath, and walk-in closet. 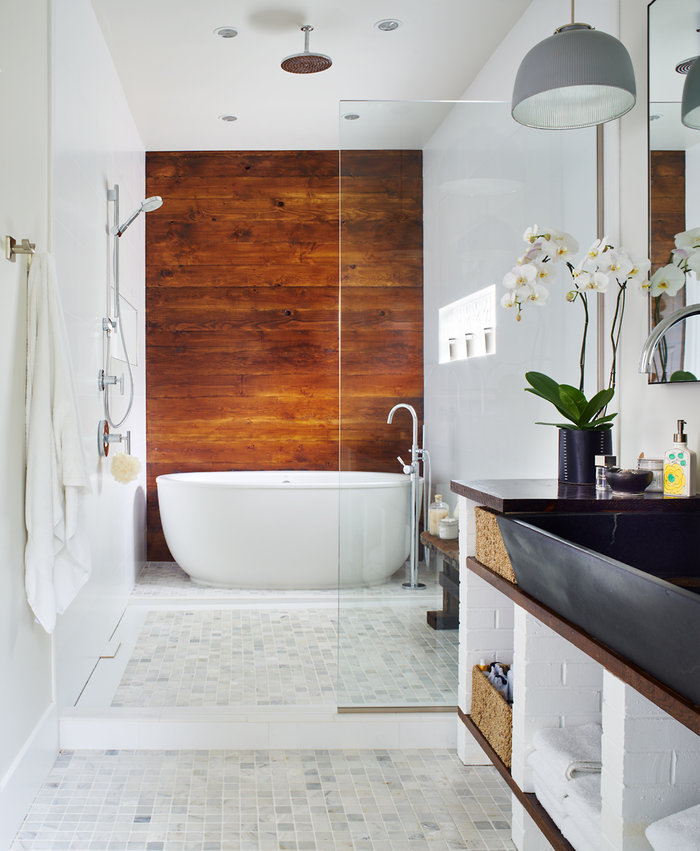 "Much of the original flooring was damaged and there was a pronounced slope," Jones says. The fix involved removing flooring and joists, but Strok wanted to reuse as much of the old materials as possible. "The wood behind the master bathtub and show is reclaimed from the home's original floor joists," Lowe says, as well as the vanity shelves. And the vanity bricks are from the original exterior. 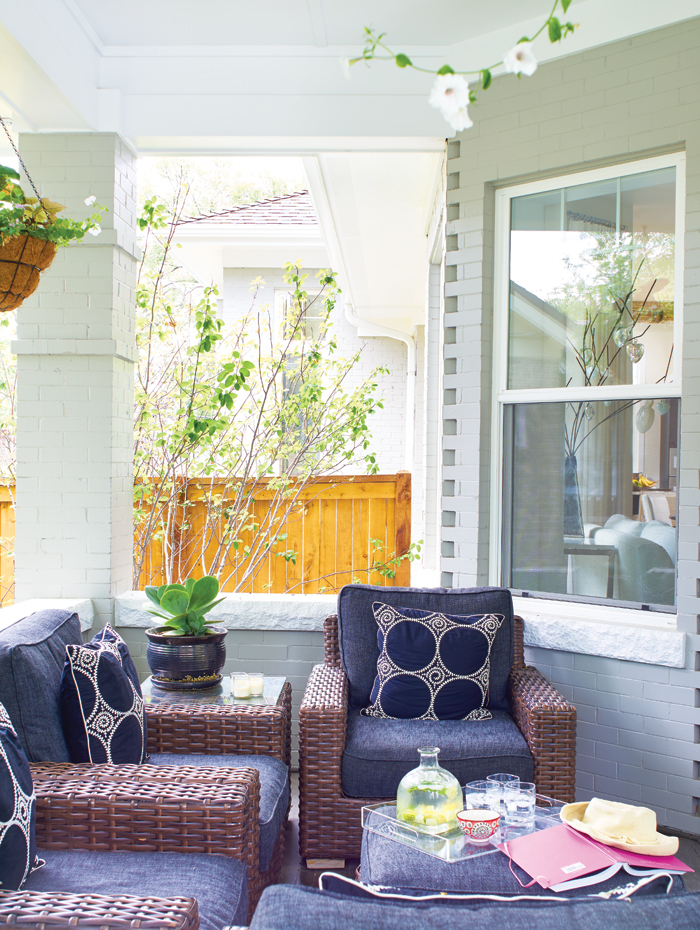 The porch chairs are from Restoration Hardware, and the embroidered pillows are from Pottery Barn.

​See also: A Century-Old Denver Home Remodel One Room at a Time