The Party According to Kathryn Ireland 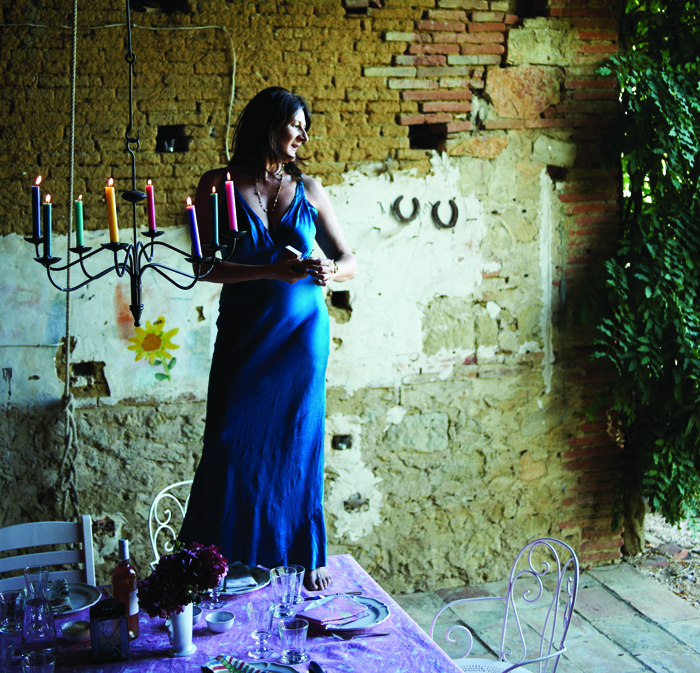 Kathryn Ireland has trouble sitting still. Within minutes of my arrival at her new, light-filled home in Venice, California, she is striding from room to room, gazelle-like, offering constant commentary about the décor in her commanding British accent. She talks about her art (“the Stella is from my ex-husband”), the state of her nest (almost empty), and her decision to sell her large Santa Monica home and simplify (a more compact layout sans pool and guest house).

Even in her own home, with no client in sight, she is a larger-than-life presence. She gives instruction to the four people currently working on the premises, including two guys who are hanging mirrors and pieces from her impressive art collection. She queries me about the color she’s thinking of reupholstering the living room sofa (“Do you think it’s too dark?”) and if the black-and-white photos currently arranged on the floor would look right over the piano.

Before I can come out with a fully formed answer, we’re out the door. We whisk down the block, passing a dress shop on the corner. “They have adorable things,” she says. When the owner walks outside, Ireland turns and yells, “I’ll be back later with my slip!” One more door down and we’re seated at a local eatery, ordering a breakfast of open-faced egg sandwiches. Ireland manages to befriend the waitress even while sending back her cappuccino three times. Design is Ireland’s strong suit, but charm should be her middle name.

So it surprises me not a whit that Hollywood found her, and that Steve Martin is the person who got her into the decorating business in the first place. Twenty-two years ago it was Martin who professed to want a home “just like hers,” so she designed him one. Since then, Ireland has become a one-woman industry—creating beautiful, rustic-chic homes for the rich and famous, hosting TV shows (Bravo’s Million Dollar Decorators), manufacturing her own line of fabrics, representing brands (Aga, the English stove company), writing books (five to date), and holding workshops for aspiring designers. Somewhere in between breaths, she’s also managed to become legend for throwing a marvelous shindig—a trait she’ll tell you she inherited from her mother.

Lucky for us, she’s not shy about sharing her tips—from ways to create an ideal environment for guests to how to behave when you’re the one being entertained. Below we offer photos from Ireland-designed homes and entertaining spaces accompanied by her wisdom and wit. After meeting her, we can’t imagine anyone more entertaining to spend time with. 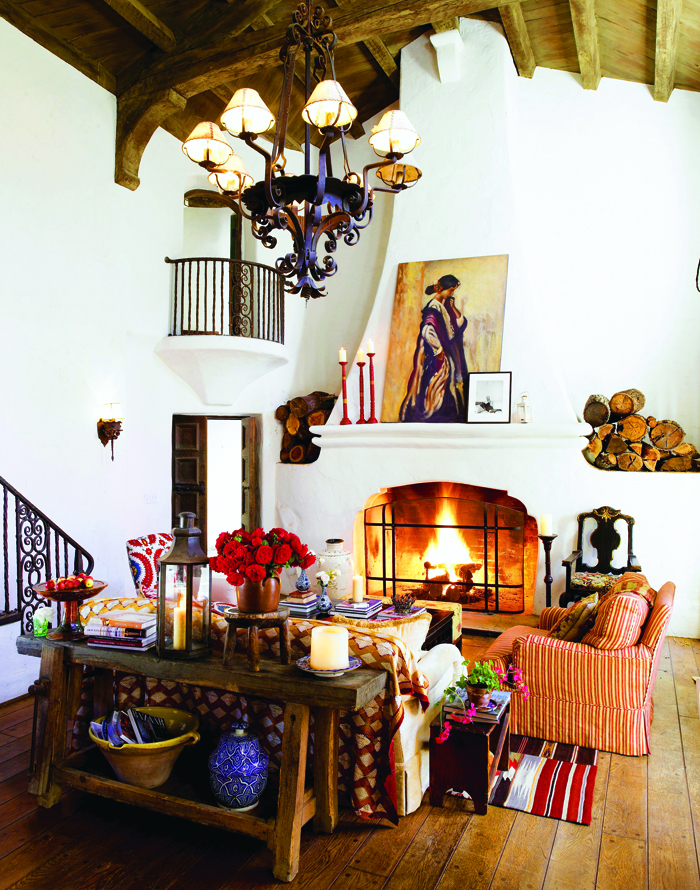 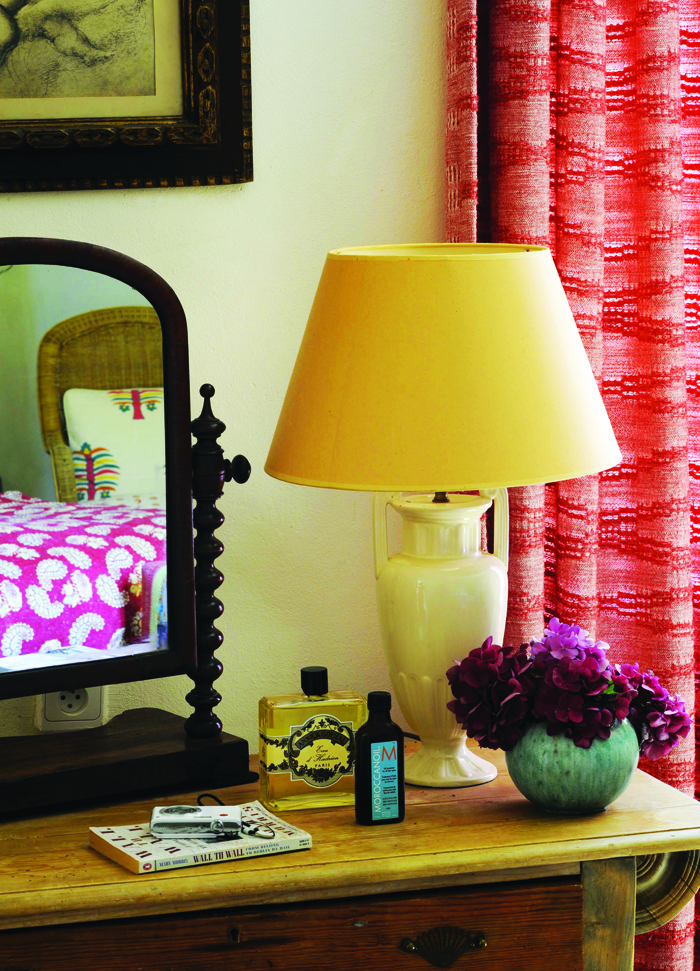 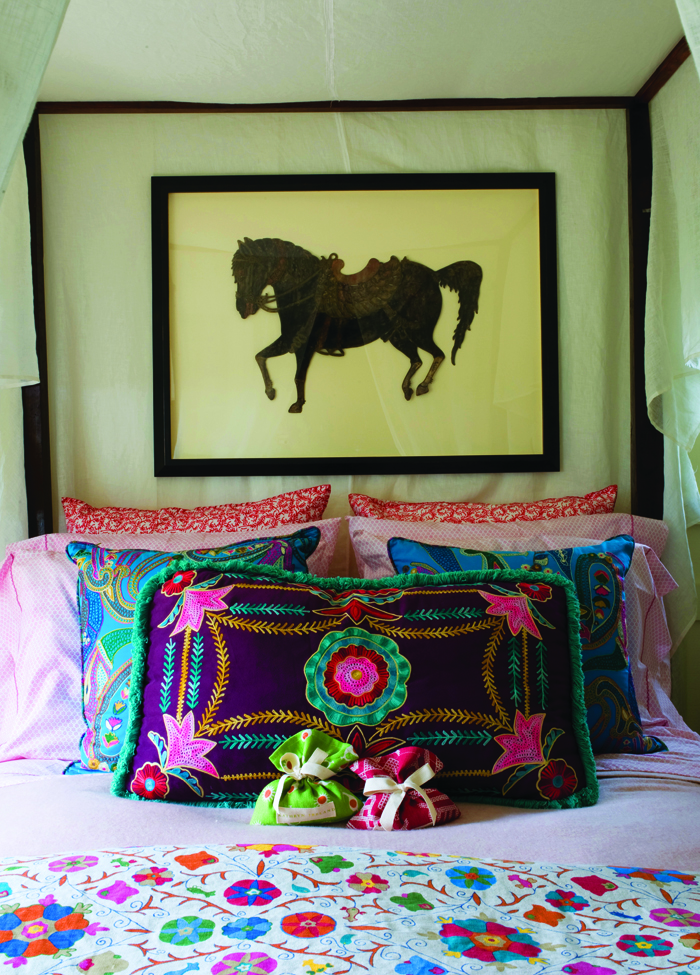 This bed is from an Ireland-designed Santa Barbara ranch guest cottage. [Photo by Tim Beddow]

INGREDIENTS FOR A DELICIOUS GUEST ROOM

1. A clean, neutral space with a good mattress, good pillows, and empty closets and dressers. Guests should not have to deal with your stored clothing.

2. Personal touches make a guest feel welcome: Fresh flowers and a carafe of water by the bed make a lovely statement. So, too, do a few good books and some recent magazines.

3. Good reading lamps within reach so guests don’t have to get out of bed to turn off a light.

4. I love a homemade gift, so I often leave a lavender sachet (see photo above) made from one of my fabrics on the bed.

5. Fresh, crisp linens and towels. They don’t have to be new, but they shouldn’t have stains. Include a darker towel or cloth for makeup removal.

6. A fun selection of toiletries. I spend half my year traveling, so I stock up on hotel courtesy soaps and shampoos from all over the world and recycle them in my guest rooms. 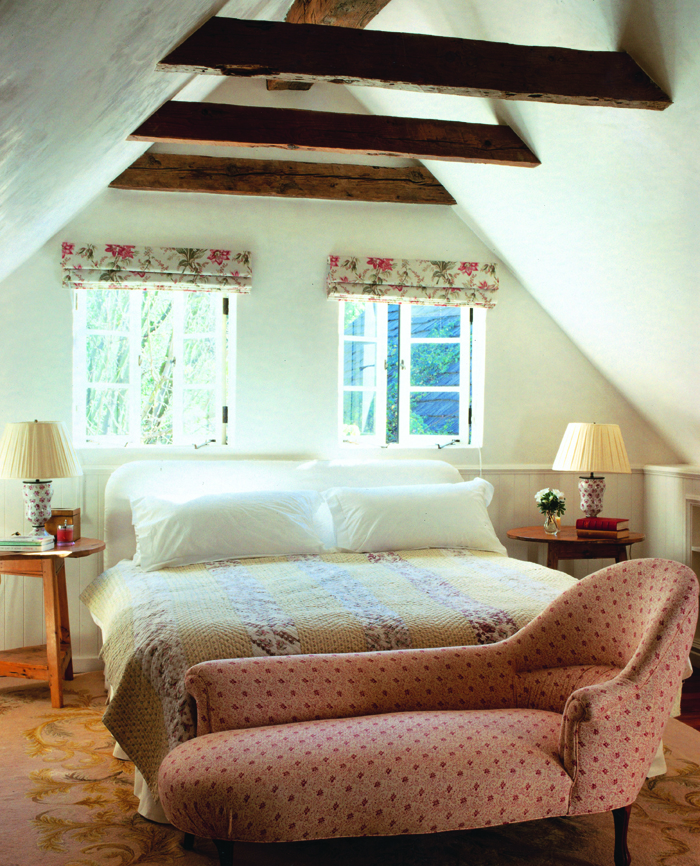 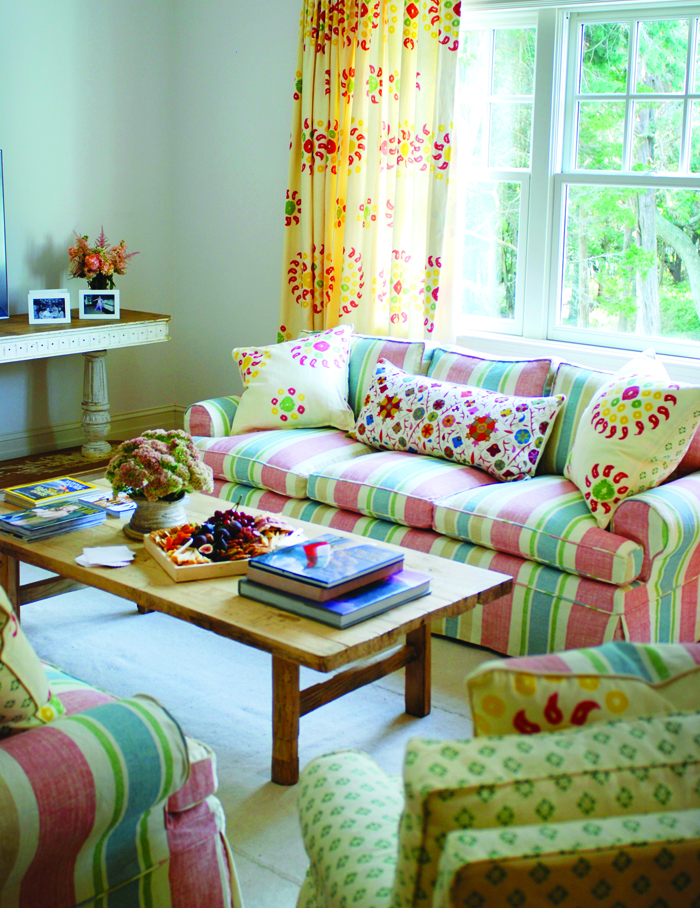 RULES FOR THE GUEST 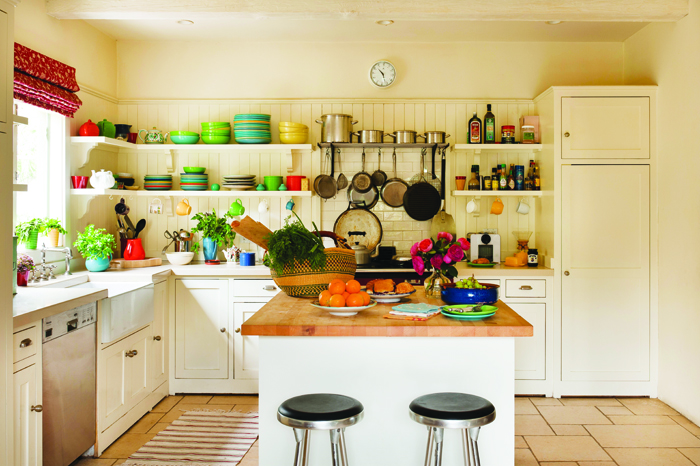 FOR THE BREAKFAST TABLE

Unlike dinner, where it’s mandatory for everyone to sit down together and break bread, breakfast is a much less scheduled and structured affair. I like my guests to feel welcome and cared for but not directed.

Cloth napkins are a must because they add warmth and charm. Beyond that, I like to set up a casual table where guests can help themselves. I usually include fresh orange juice, fruit, yogurt, pastry, and great bread, as well as a daily newspaper. After that, it’s up to the guest. 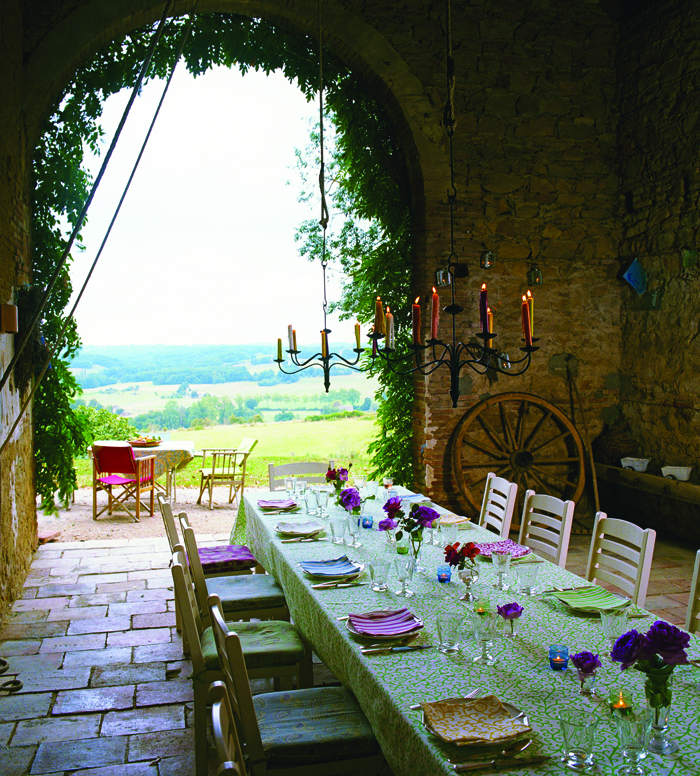 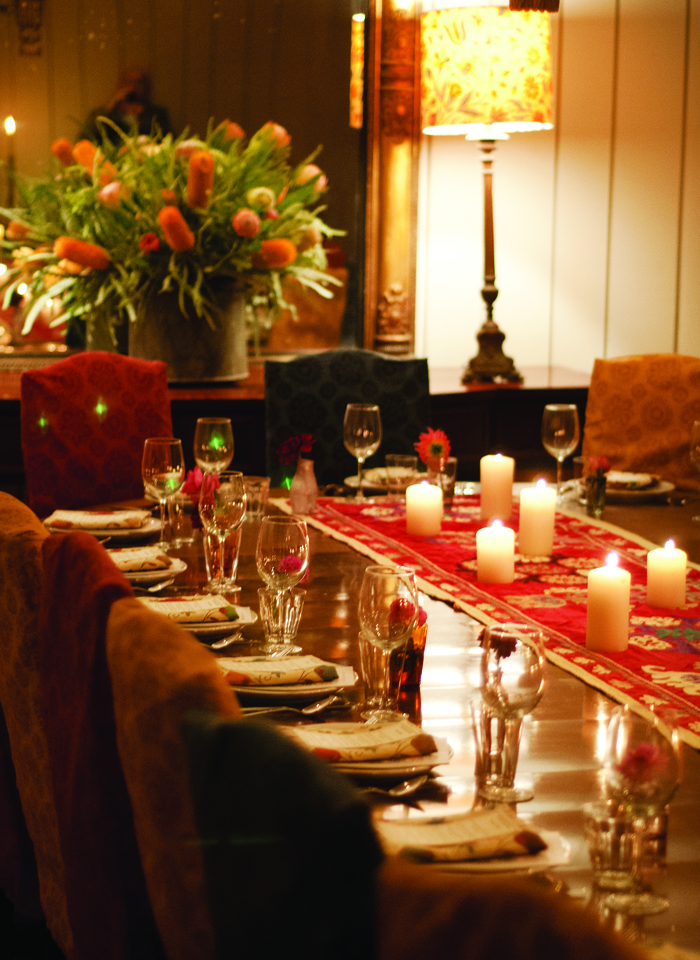 9 MUSTS FOR DINNERS BIG and SMALL

1. Mood lighting. Include as much candlelight as possible in every place you can think of. In France I use only candles and I mix and match. Make sure they’re no-drip.

2. A lit fireplace. It makes guests feel comfortable and cozy in winter and on cool evenings spent outdoors.

3. A great chandelier or two, if you have a big table, grounds the setting.

5. Great table linens, including some colorful ones as well as white Irish linens for more formal occasions. I mix and match because it makes things more relaxed, less controlled.

6. Comfortable dining chairs for long nights at the table.

7. Simple silver. I have a complete Deco set I found at a local flea market in France. Antique markets are a good place to start piecing together a set. They absolutley don’t have to match.

8. Music. I have playlists for every mood…Music should be soft and in the background -—never loud enough that it’s competing with the lovely sound of human voices. 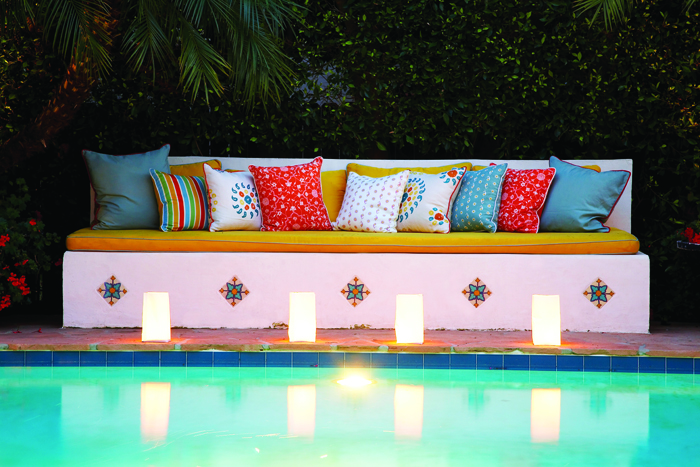 A cool guest list and a wide range of interesting people—I often have friends ages 2 to 82.

Seating is key. If it’s a sit-down dinner where everyone knows each other, then it’s everyone’s choice. Otherwise, I pair people who have something in common and who I feel certain will get on. I never want anyone to leave a party early because they’re bored.

Print out your menu and place it on the plate or tuck it into a beautifully folded napkin. This gives the event an air of elegance, and if you print your guest’s name at the top, it can also serve as a place card. A lot of people like to have something to remember from the night.