The More the Merrier

It was a formula that worked before. The homeowners partnered with interior designer Melinda Douglas on their Denver home just 2 1/2 years prior. So when they were ready to design their Copper Mountain condo, the couple called on her talents again.

“She’s amazing,” says the homeowner. “Melinda is full of great ideas and her team is fantastic. She takes an individual’s style and melds it with her own wonderful taste.”

Not that it started out to be such an elaborate project. At first the intent was to combine two separate units by punching through some stairs. “But it turned into a Pandora’s Box! So we stopped and took some time to think about how we live and how it was going to function for a family of six. We have lots of visitors so we needed to maximize space.”

The owners took their ideas to Douglas and the creativity immediately began to flow. “The condos were in their original state,” says Douglas. “They were typical mountain condos—bland and boring, functional but totally uninteresting.” In fact, she adds, “the hero was the homeowner. He pushed and prodded my team and contractor Bill Simms to think outside the box. He knew what could be done.”

“His requests were simple but challenging. In a relatively small environment, he and his wife wanted to be able to welcome friends, families, children, teens and grandparents. They wanted to entertain them during ski season, but also any time throughout the year. The husband mandated that we provide space for such hefty items as ski racks, boot racks, boot warmers and ski clothes. The wife required that there be a washer/dryer in the condo, a big pantry, a sizeable linen closet, ample kitchen space, etc.” 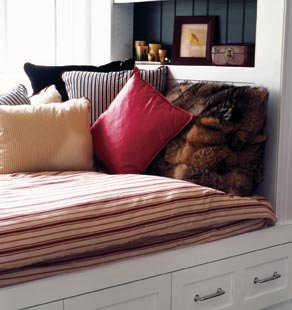 In order to accomplish these goals, structural changes had to be made—walls taken down, a staircase built, a “ski room” designed, window seats constructed, bathrooms reorganized, bedrooms forged from old living rooms. But the piece de resistance, says Douglas, was the kitchen. “It had to accommodate many needs and interests. We provided not only the requisite range, ovens, refrigerator, sinks and microwave but also two dishwashers, a wine cooler, refrigerator drawers, a coffee station, pantry, spice rack, dumbwaiter and storage, not to mention counter space.”

The decorating went hand-in-hand with the space planning. Everything in the home had to be durable but smart and fun too. In fact, that sense of joy drove the design. Douglas explains, “the owners love life; they live life. So the design had to be compatible with their energy and enthusiasm. It needed to be strong, colorful, unpretentious and impervious to wet ski clothes, the dog’s muddy feet, sick children and spilled Scrabble boards.”

The rubber flooring in the entry and kitchen is just one example of a decorating decision that was practical yet had panache. Ski boots would have ruined a hardwood floor and they wanted the best look they could find with low maintenance. They also wanted to be able to cook and clean up in a matter of minutes. A pair of matching window seats was another smart decision. The wife’s first thought was to create something the size of a daybed, a place where you could curl up with a book or take a nap. “But the husband wanted to supersize them,” Douglas recalls. As a result, the built-ins are fitted with full-size mattresses. Not only are they favorite daytime retreats; they are put into service for overnight guests. “Before, we were wedged in with eight people,” the homeowner adds. “Now there can be up to 17!”

Like the furnishings throughout, fabrics had to be durable but handsome. Working within a foundation of taupe, brown and black, Douglas punctuated the scheme with red solids, ticking and trim—even red faux fur. Two of the most notable additions are the barn-style doors that close off the kids’ room and an antique flag, framed and prominently placed over the banquette in the dining area. (In the canton of this parade flag, 38 stars are arranged to form “1776.” The count of 38 reflects Colorado’s pending statehood on August 1, 1876—the same year as the country’s centennial celebration.) This particular piece represents Douglas’ approach to accessorizing this mountain home. “We didn’t want antlers or pictures of skiers from the 1920s,” she says. “We wanted something that was uniquely Colorado—but also distinctive.”

Just as impressive as the overall design is the amount of time that it took to complete. Or, more to the point, the amount of time it didn’t take. The pre-construction meeting was held in August, and less than three months later it was ready for the family to move in. However, the result looks anything but rushed; instead, it is relaxed and refreshing, exactly what a mountain retreat should be.