DESIGN OBJECTIVE
The tiny house (875 square feet) on the tiny lot (one-eighth of an acre) had major upsides for Jamison and Jennifer Brown: walking distance to downtown Boulder, an eclectic neighborhood (Whittier) and a glimpse of the Flatirons. Best of all, “it was the only place under $600,000 left,” says Jamison, with a chuckle, “so it was definitely cost-driven, but we also wanted development potential and some ability to add value to the property.”

Pairing up with ski buddy and fellow University of Michigan alum Mike Piché of Studio B architects, Brown tasked his friend with “master planning the entire site” to include a new residence (eventually) and a detached garage and office (ASAP) for his site-planning and landscape-architecture business, JB Fieldworks. 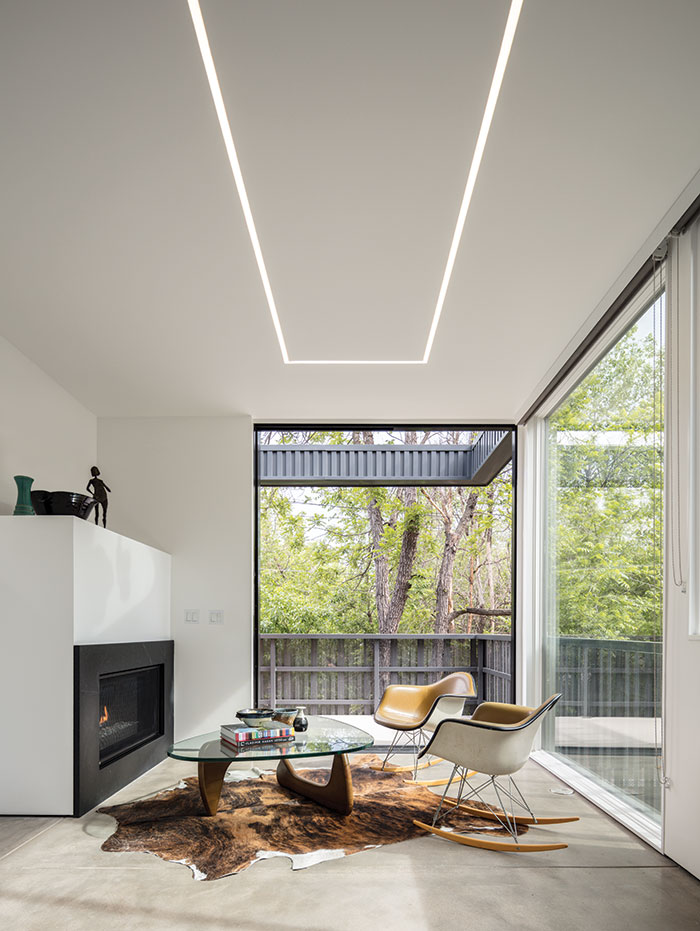 Seating Area  Vintage Eames Shell Chairs with new rocker bases and a Noguchi knockoff coffee table face the fireplace. The cowhide rug is from Brazil, and the floor is polished concrete. Poised atop the fireplace is a bronze sculpture of a pregnant woman that owner Jamison Brown’s maternal grandfather gave him.

The objective from the get-go was to create a “fun, unexpected and playful” space, says Piché. “We definitely wanted to do something really modern and came up with a monochromatic palette, knowing Jamison would eventually fill in the yard with great plants and vegetation, and those colors would really pop.”

“I felt if we did a long, linear space it would just feel bigger.” — Jamison Brown 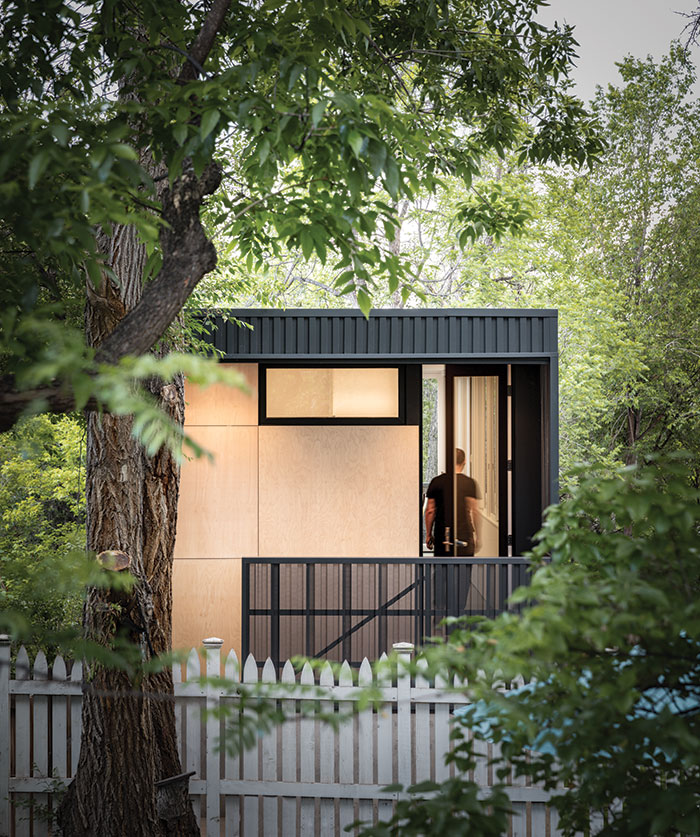 Exterior  Opposite the deck side, a staircase leads to Brown’s shotgun office. Economical, marine-grade plywood “adds a little bit of warmth to contrast with the colder materials of the concrete and steel,” says Piché.

THE RESULT
The completed “Space Pod,” as Brown and Piché cheekily call it, is a minimalist quadrilateral, with a 422-square-foot tandem garage below and a 444-square-foot flexible office above that maximizes foothills views and southwest exposure, all while screening the Browns’ one-story bungalow from neighboring properties.

Steel, concrete and glass on the exterior and Baltic birch plywood and polished concrete floors on the interior accomplished Brown’s goal of using low-cost, low-maintenance materials. Two flush-mounted LED ceiling lights “subtly define the different zones within the upper level,” says Piché. The furnishings and art are a fusion of purchased pieces and vintage hand-me-downs. 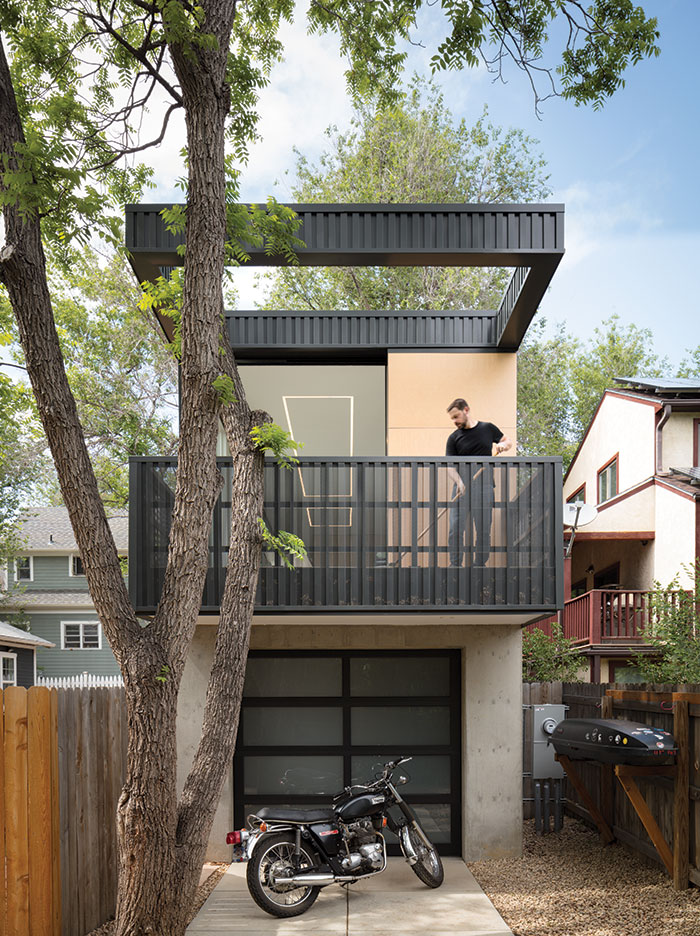 Exterior  Piché sweeps the Browns’ alley- and Flatirons-facing deck. The sliding glass door pockets into the wall, making the space feel “that much bigger,” says Brown. “We’re out there all the time. Plus, the beauty of having a deciduous tree is that in the winter, we have the warm, southern sun, but in the summer, it’s fully shaded.” Ready to ride is Brown’s 1973 Triumph Trident motorcycle, a gift from his father and a nod to his birth year. 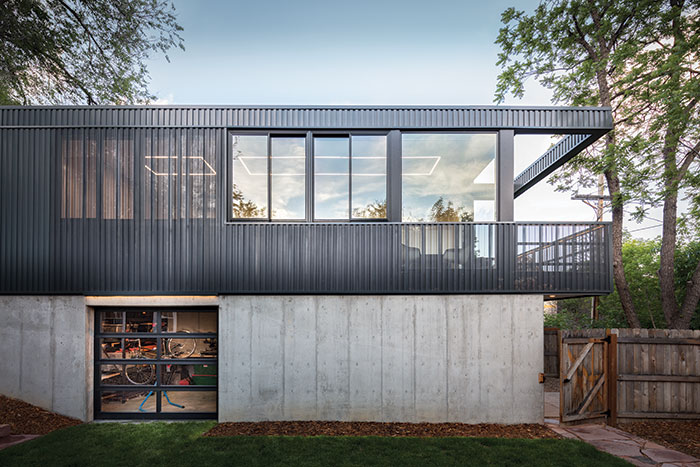 Exterior  The all-black, shadow-shifting, abstract paintings of Ad Reinhardt and Frank Stella inspired the perforated, corrugated metal on the upper half of the structure and directly over the left windows, says architect Mike Piché. “During the day, you can’t see that those windows are really there. Then, as it turns into night, the metal becomes totally transparent and you can see the windows behind.” The garage door below faces the owners’ residence and provides access to a storage area and bike workshop.

The treehouse-like space is uber-functional, with a large dash of minimalist hip. “The idea to do a 12-foot-wide by 40-foot-long element was all about the site and my desire to have a different kind of dwelling,” explains Brown. “I felt if we did a long, linear space it would just feel bigger. This rectangle is exactly in the box the City of Boulder allowed us to build in.”