The Faces of Noosa Yoghurt in Bellvue, Colorado

The Folks at Colorado’s Noosa Yoghurt like to talk about the “hang test.” Ask them, “How long can it hang?” and they’ll do this: Take the lid off a tub of Noosa yogurt. Flip it upside down. Turn on a timer. And see how long it takes for the yogurt to slide out. The answer: a long, long time.

That unusually thick, velvety consistency is due to a couple of things: First, the recipe. “I discovered this yogurt when I was home visiting my family,” says Aussie expat and Noosa founder Koel Thomae, “and it was the best thing I had ever tasted. I felt like I had to get my hands on the recipe.” (It took a while, but she did.) Second, the ingredients—not just healthy fruits and locally sourced honey but especially the rich, creamy milk. Enter Rob Graves, a fourth-generation dairy farmer who runs Morning Fresh Farm in Bellvue and helped Thomae launch the first Noosa test in January 2010. 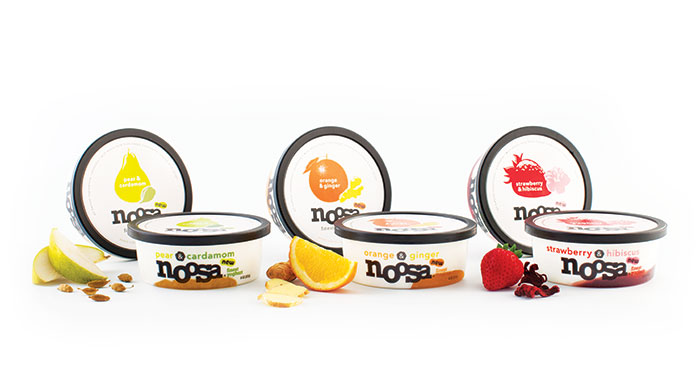 Graves is a believer in coddling his cows. “I still farm in old-fashioned ways,” he says. “We don’t push the cows very hard, and we follow a routine, milking them and feeding them at the same time every day and with the same people. If your cows are happy and content, they produce a richer, creamier milk. We just take extra care—and I enjoy the heck out of making yogurt.”

Today, Noosa, which is named after a cool little town on Australia’s Sunshine Coast, is now sold in all 50 states. It has grown to 25 flavors, from the traditional (such as blueberry, Noosa’s most popular flavor) to the wickedly innovative (such as Blackberry Serrano, Graves’ favorite). Most new flavors, of course, are tested first within the borders of Noosa’s home state. Health-conscious Coloradans, Thomae says, seem to have a “love fest” with Noosa.