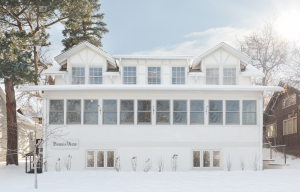 Because the home is an historic landmark (built in 1918), the exterior remains largely unchanged. “We were allowed to replace the windows in the enclosed front porch, which we think were added in the ’70s, but the rest of it was lovingly restored,” says interior designer Lisa Laursen, who renovated the home. | Photography by Kylie Fitts

When a San Francisco couple looking for a more wholesome place to raise their two young boys first saw the historic 1918 home in Chautauqua Park, they immediately fell for it—despite the fact that it needed a lot of work and that they weren’t quite ready to buy it. “We just wanted to spend more time in it,” remember the owners. “We didn’t want to leave.”

At that time, however, they were still trying to figure out jobs—he’s in cyber security, and her background is in philanthropy and social impact—and it was a little too early to pull the trigger. That was 2017, and they decided that if the home was still for sale a year from then, they’d put in an offer. Twelve months later, unbelievably, the house was still on the market. The owners, who had had the property in their family for generations, were waiting for the right family. 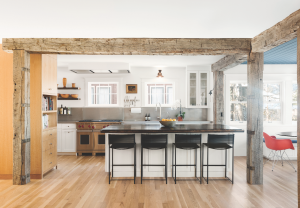 The husband, who’s the main chef of the family, wanted stainless steel countertops because they’re so easy to clean. Laursen warmed up the space through contrast: She chose an island countertop made from reclaimed boxcar flooring, and the showstopping rough-hewn beams, which date back to 1865, were sourced from a Midwestern barn. The beams also serve to delineate the kitchen space while opening it up to the living room and beyond. Sink from Waterstone; sconce by Allied Maker. | Photography by Kylie Fitts

“We knew from experience that selling a house that’s been in the family is a big deal,” say the current owners. “We sat down with the owners and talked about our family histories and how we’d love to maintain the essence of the historic home while modernizing it.” 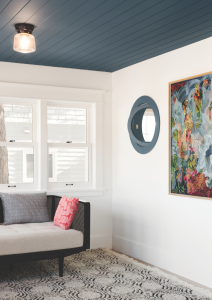 The porch color scheme was inspired by a site visit after a snowstorm,” Laursen says. “It’s the color of the crisp Colorado sky contrasted against the snow on the Flatirons.” The paint color is Van Deusen Blue at 50% by Benjamin Moore. | Photography by Kylie Fitts

Chautauqua isn’t your typical neighborhood: The land was bought by the City of Boulder in 1898 and was designed to be the headquarters of Colorado’s Chautauqua Movement, an educational assembly that introduced people with limited access to secondary education to the important ideas of the time. It was declared a National Historic Landmark in 2006 and is now one of the most visited parks in the state, with 40 miles of trails that crisscross the iconic Flatirons. 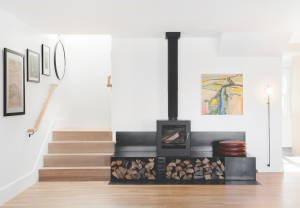 The original fireplace was removed to accommodate the new floor plan, which provided access to the newly constructed basement. The wood-burning fireplace by Rais sits on a custom steel hearth designed by Laursen and fabricated by Kristian Kluver. | Photography by Kylie Fitts

The couple’s home is one of roughly 100 cottages built in the 1900s for Chautauqua teachers, along with a dining hall, auditorium, student dormitory and a lodge for visitors. Most of the cottages are now short-term rentals owned by the Colorado Chautauqua Association, so there aren’t many year-round residents here. Their family is one of only several. 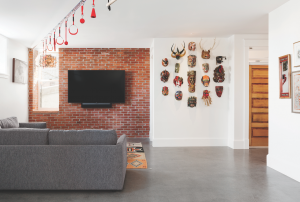 Because the home has no garage, the basement dig-out was an important part of the renovation. To give it a warm, historic feel in line with the rest of the home, the team repurposed the bricks from the old fireplace into the walls and took great care to use antique or distressed doors and hardware. | Photography by Kylie Fitts

For the couple, looking for respite from big city living, the location was idyllic— so much so that they were willing to work through the many challenges that came with the home. The City of Boulder still owns the land on which the house sits, for example, which is an unusual arrangement in homeownership to be sure. Also, because the home is in a National Historic Landmark, the renovation restrictions were daunting. There is no garage and no hope for building one due to said restrictions. In addition, no construction is allowed during summer, due to Chautauqua rules. But because the house was so special, the couple decided to move forward with the process. “We wouldn’t change it,” say the owners. 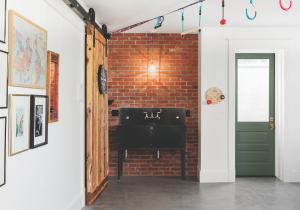 An antique soapstone laundry sink now serves as a kid handwashing station, and ample storage is beautifully stashed behind a barn door. “We don’t own the land. We don’t have a garage. So coming from San Francisco to snow was daunting, but we now have an epic storage system in the basement,” the wife says. | Photography by Kylie Fitts

As for living in the park, “I don’t think we even realized how great it was going to be,” says the husband. “We’ve had two mountain lions on our Ring camera, and we see bobcats, bears, rabbits and foxes. “The kids,” ages 7 and 9, “love it, and we’re getting to know the cottagers. There’s a multigenerational element that is really nice. It’s hard to be in a bad mood when you’re here.” 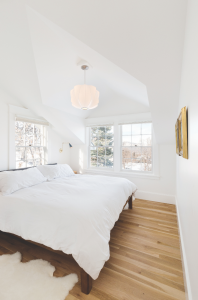 Vaulted ceilings on the third floor give the rooms a little more volume. White, bright and simple is the theme in this bedroom, where a Nelson Pendant chandelier from DWR adds a subtle touch of drama. Bedside sconces from Triple Seven Home. | Photography by Kylie Fitts

When it came to the renovation itself, though it was extensive, the owners pledged to respect the history of the home. They hired Lisa Laursen as lead designer along with contractor Joel Smiley, known for his work on historical landmark homes in the area.

The major items on the agenda were to dig out a basement, which required them to build a new foundation, and add a couple of dormers to the top level, where the low ceilings were challenging. “My husband is 6’ 4”, so he needed to be able to stand up in the shower,” laughs the wife.

Both of those projects had to go through a few iterations of plans to be approved by the Chautauqua Design Review Committee. “Even though the changes weren’t really visible, the committee is pretty conservative with what they’ll let you do,” says Laursen. 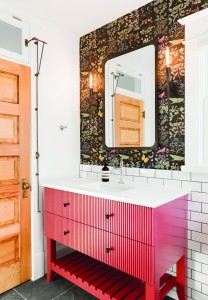 The light-filled top story has three small bedrooms and two baths. In this image, you can see the antique door and transom, which Smiley’s team lovingly restored. Apothecary’s Garden Wallpaper by C.F.A. Voysey; the mirror is RH Modern; sconces by Mitzi Terra; custom vanity designed by Laursen. | Photography by Kylie Fitts

They painted every wall, brightening up the space with clean whites and colorful accent walls, but kept all the old doors and transoms, as well as all the old hardware. They had to replace the original fireplace, because it was in bad shape, but they reused the bricks for an exposed-brick wall in the basement. They also retained the original layout—which has small bedrooms and cozy nooks—and used materials reclaimed from the home and other structures in creative ways: reclaimed boxcar flooring became countertops and floating shelves; an old soapstone laundry sink became a working hand-washing station in the basement; and wood beams from 1865 became the focal point of the kitchen. 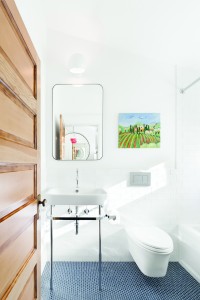 The couple’s artwork plays the chief decorating role in much of the home, and this bathroom is no exception. “We came from San Francisco with not much else but art and wine,” laughs the wife. The penny tile is Get Around from Mission Stone + Tile; sink is Happy D by Duravit; Big Boi sconce is by David Weeks Studio; and the wall-mount toilet is by Toto Maris. | Photography by Kylie Fitts

At the end of the process, the couple had created a bright, clean, modern take on an historic Craftsman. They had only one more thing to do—invite the original owners inside to see what their home had become. “We were definitely nervous to have them come,” says the wife, “but they were so appreciative. They felt like we had honored the house, and that was our intent and the promise we made to them.”