The Architectural Intelligence of The Aspen Institute

Tops on my not-to-be-missed list would be the collection of buildings that serve the Aspen Institute, the Aspen Music Festival and School, and the Aspen Center for Physics. The original buildings and the overall inspiration for the campus are the brainchild of Herbert Bayer, Bauhaus architect, designer and artist who was brought to Aspen from Chicago by Elizabeth and Walter Paepcke in the late 1940s to tune up the ramshackle, sleepy ghost town they had found high in the Rockies. Walter, head of the Container Corporation of America (think cardboard boxes), and Elizabeth, with her Cranbrook Academy art and design education, were responsible for founding the Aspen Music Festival and School and the Aspen Institute, as well as the now-extinct International Design Conference in Aspen, organizations that are largely responsible for the city’s intellectual and cultural eminence today.

The Bayer-designed campuses are on the western edge of Aspen’s fashionable West End, and their manicured, open, undulating landscape and distinctly modern buildings contrast sharply with the picturesque, tree-lined Victorians of the surrounding residential neighborhood. 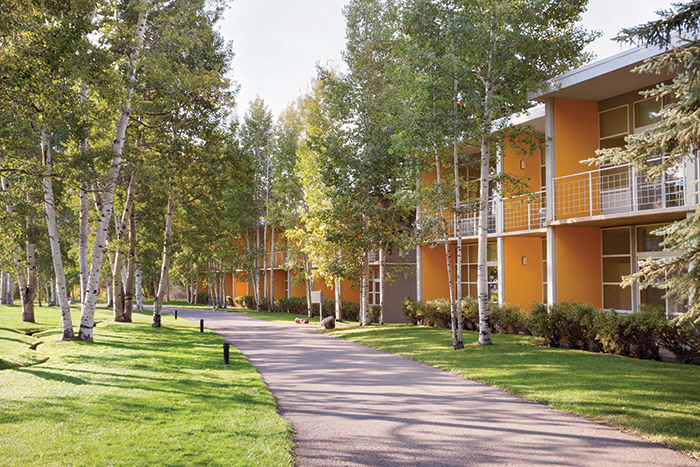 The Wachner guest building is one of eight Bayer designs used for the institute’s accommodations at the Aspen Meadows Resort. [Photo: VRX Studios courtesy The Aspen Institute]

Stark-white roofs stand out against the deep blue of Colorado high-country skies, not unlike the white snowcapped peaks that surround Aspen in the early spring. Bayer, in true Bauhaus fashion, combined his artistic eye with his design discipline to create an architecture particularly suited for this mountain setting.

None of these buildings had big budgets, but Bayer’s awareness of the clear, sharp mountain light is apparent in the shadows created by various textures in the humble materials he had to work with. Patterns animate concrete-block walls, and deep shadows add a dynamic element to his already strong architectural geometries. 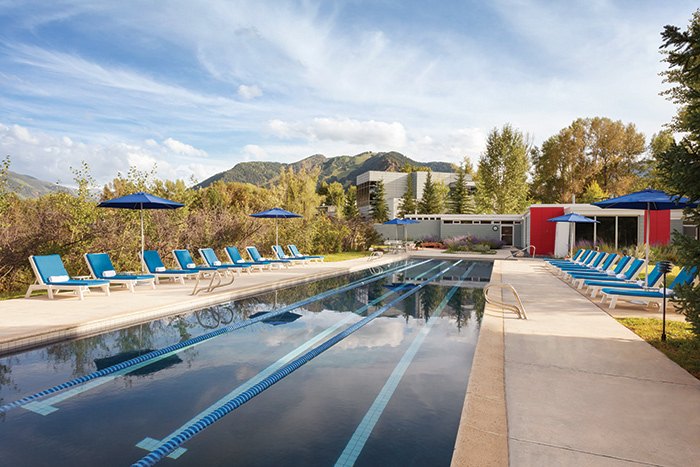 I think my favorite building on the whole campus is the Health Center. Precast V’s make for dramatic shadows on the walls of the simple gym; the façade is enlivened with Bayer’s superb, super­graphic, typographic mural; and a spectacular spiral stair winds up to what used to be a sundeck when tanning was still considered healthy. You can imagine little round sunglasses, one-piece paneled bathing suits and bronzed, perfect-toothed smiles.

As interesting as the buildings are, I find the artworks in and around them equally compelling. Bayer and Elizabeth assembled discarded fragments of white marble from the Yule quarry in Marble, Colorado, into a sculpture garden and fountain that form the spectacular centerpiece of the Aspen Meadows Resort. 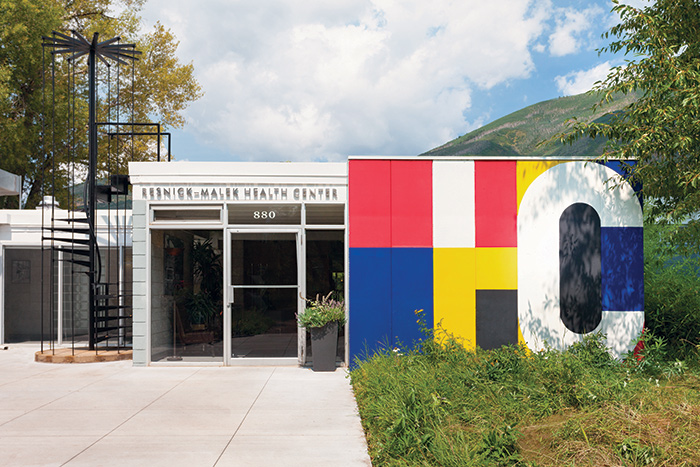 The path between the Meadows and the Institute runs through the subtle sculpted mounds, rings and ponds of Anderson Park, a very early example of contemporary earth sculpture. For whatever reasons, neither kids nor adults can resist running to the top of the various mounds or stargazing from their soft peaks at night.

Bayer’s colorful art pervades the interiors of the buildings as well. Paintings, prints, sculptures and even large-scale tapestries surprise and astonish at every turn. The architecture is a perfect setting for this less-restrained aspect of the master’s creative output. The campuses are more or less a permanent museum of Bayer’s art and graphics, but don’t miss the comprehensive Bayer exhibit currently on display at the Meadows.

One of the main reasons I still love this extraordinary collection of 50-year-old buildings is not so much that they are examples of currently popular midcentury style but that they are manifestations of the underlying philosophy of the founders of the Aspen Institute itself: the enrichment and nurturing of the body, mind and spirit. It is impossible to walk among them without being affected by this higher purpose. They are a convincing example that architecture is about more than superficial style and is actually capable of uplift and inspiration. 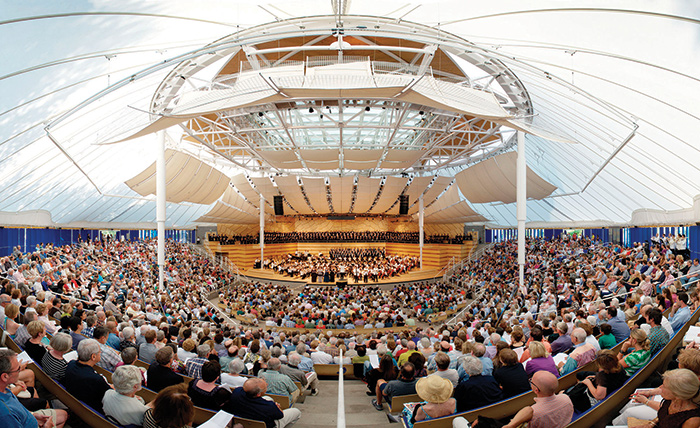 A summer event at the Benedict Music tent, which was redesigned by this column’s author, Harry Teague, to preserve the relaxed ambience of the previous tents designed by Eero Saarinen and Bayer. [Photo: Alex Irvine courtesy of The Aspen Institute] 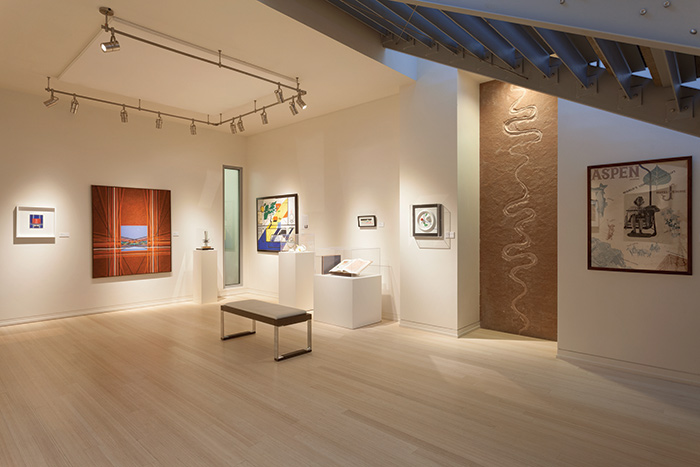 An ongoing comprehensive exhibit of Bayer’s art on display at the Resnick Gallery in Aspen Meadows. [Photo: VRX Studios courtesy The Aspen Institute]

Kaleidoscreen, one of many Bayer artworks that live on the grounds of the Institute. [Photo: VRX Studios courtesy The Aspen Institute] 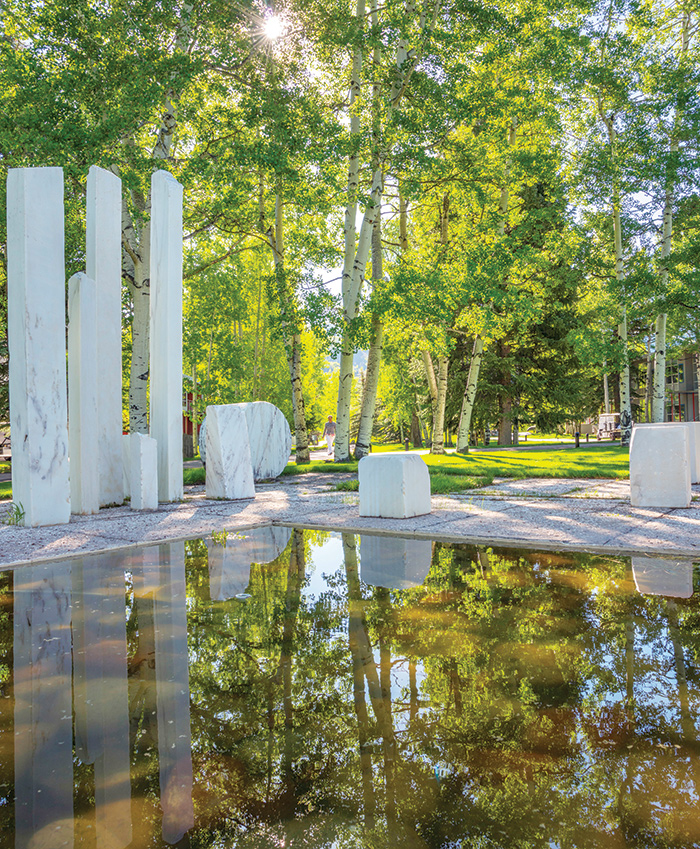 Visitors to town can experience the brilliance of bayer’s work, as well as lodge and/or dine at aspen meadows resort. for more information, visit aspenmeadows.com.